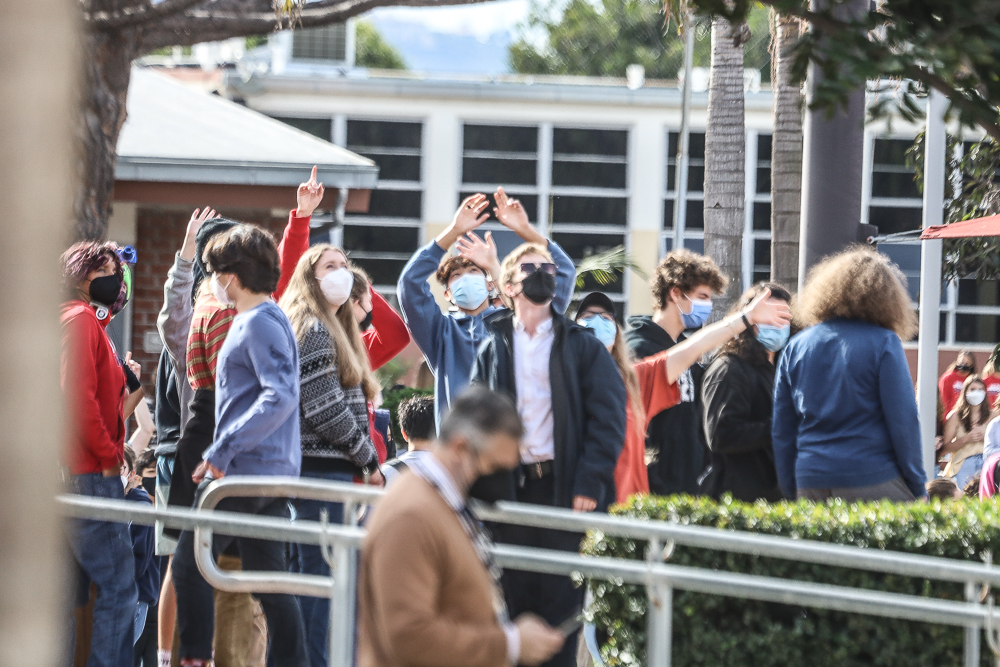 Redondo Union High School students look up at a KTLA News helicopter covering their walk out over COVID policies. Photo by Kevin Cody

Senior Michael Lee-Chang, who spoke to the school board Tuesday night, helped spread word of the walkout, using Instagram Stories. He said he did not know who organized the walkout.

“I’m vaccinated, I’m not really worried for my own well-being,” Lee-Chang said. “I’m more worried about the two adults in my house who can actually get really sick. Even teachers at school, I feel like they’re taking a huge risk.”

“All concerns brought forth via social media (in the days before) in regards to COVID protocol and safety were addressed directly with the concerned students,” Bridi said. “It was swirling to the point that I had to involve myself.”

The district has strengthened its masking rules and other COVID practices since the return from winter break, though Lee-Chang faulted the enforcement.

He said at least one large RUHS club is still allowed to meet for lunch in a classroom indoors. Lunch is otherwise outside only.

Senior Gisselle Frisby told the school board during Tuesday’s meeting that students are pressured to come to school, though some do not feel safe because of the number of COVID cases.

“The school is sort of trying to act like nothing is happening,” High Tides co-editor Nadia Bidarian said. “It’s a little jarring coming to class even though so many people are out sick. I’m wondering at what point will cases be too much.”

Bidarian suggested that some of the students who walked out did so just to get out of class and see what was happening.

“So many showed up with no masks and there was absolutely no social-distancing,” Lee-Chang said. 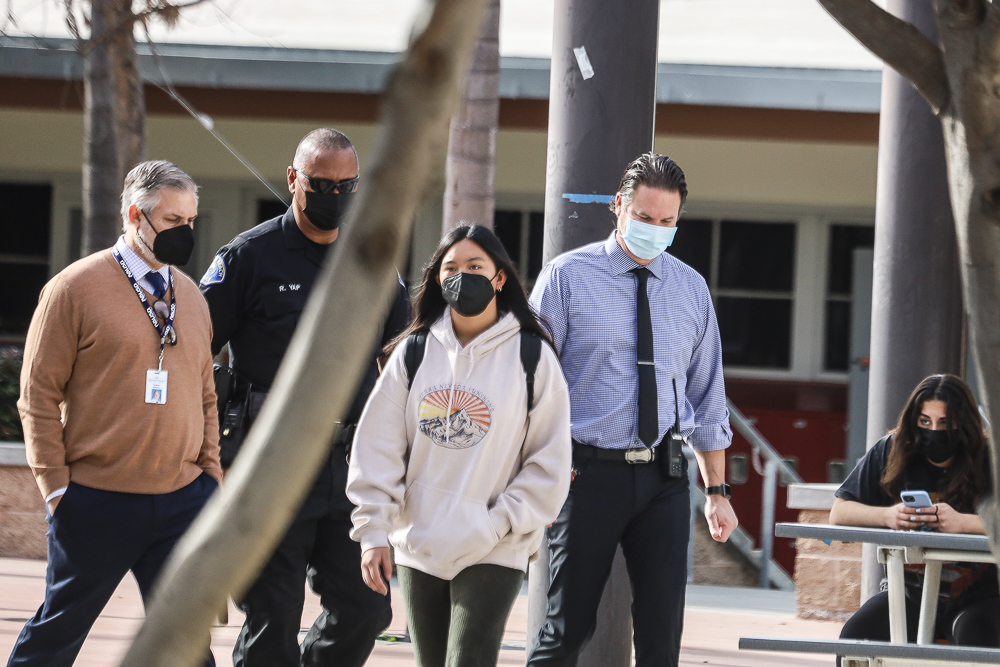 Confirmed COVID-19 cases in the Redondo unified schools hover around 10 percent of students and staff, on average. Beryl Heights had 15 percent of its students and staff test positive over the 14 days proceeding Tuesday. At Redondo Union High the rate was 14 percent, and at Dreizler Continuation High School it was 19 percent.

“This is daunting, to say the least,” said School Board President Raymur Flinn at Tuesday night’s school board meeting.

“They’ve clearly made it very difficult for us to consider otherwise,” he said.

Parents are weighing in, as well.

“It’s just chaos. I don’t mean to criticize the administration, at all,” she said. “They’re doing the best they can. But I think the pendulum has swung too far the other way. I don’t understand why the kids didn’t stay home for a month. Particularly the high school kids.”

School board student representative Charles Steerman was absent from Tuesday night’s meeting,  but he submitted a list of requests read by Board President Flinn for more virus clarification as first semester finals week approaches. He asked for reassurance that there will be leniency on absences termed “unexcused” during this time.

For parents uncomfortable with sending students to school, Keller gave a reminder about the district’s independent study option. A student may enter and/or exit the program at five days’ notice.

“Our schools are open, as everything else is open,” School Board President Flinn said. “We are an essential, vital service. Our schools are going to be last to close, first to open.”

The already-tightened district safety measures for the new year include new guidance around isolation, upgraded masks required for teachers, and outdoor masking rules (except while eating). The district follows updated directives from the L.A. County Department of Health.

Keller noted that more restrictions could be coming from the county.

In public comment Tuesday night, the school board heard a call to pay more attention to the mental health impact of the pandemic. A pediatrician, and a medical technician spoke of kids  being put on respirators, while other adults spoke against efforts to contain what they described as a cold or a flu.

Teachers’ union President Sarah Robinson told of confusion and frustration among the district’s teachers, including not knowing whether a sub will be available if for teachers who go out sick.

School events affected by the surge now include the high school’s Jan. 29 winter formal, which has been postponed to March.

Before Tuesday’s school board meeting, a group of about 30 people protested outside the district office, waving signs against possible vaccine requirements with slogans such as “My Child, My Choice.”

Staff and student absences for RBUSD since the return from winter break have come down this week.

Upon return to class Jan. 3, 35 district teachers were out on the first day. The number jumped to 62 on day two, representing 12 percent of teachers. It held near that level the rest of the week, with 57 out Wednesday, 60 Thursday and 57 Friday.

This week, 43 teachers were out Monday, and 44 Tuesday.

Teacher absences during earlier parts of the COVID-19 pandemic were 35 per day, on average, according to Nikki Wesley, RBUSD Assistant Superintendent of Human Resources. Before the pandemic, in normal times, the number was 12 to 24 teacher absences per day.

On the first day back from the holiday break, 20 percent of students were absent, and 19 percent on day two. January absences usually average six percent, according to Annette Alpern, Deputy Superintendent of Administrative Services.

For this week, 18.5 percent of students were out Monday and 17.5 percent Tuesday. ER