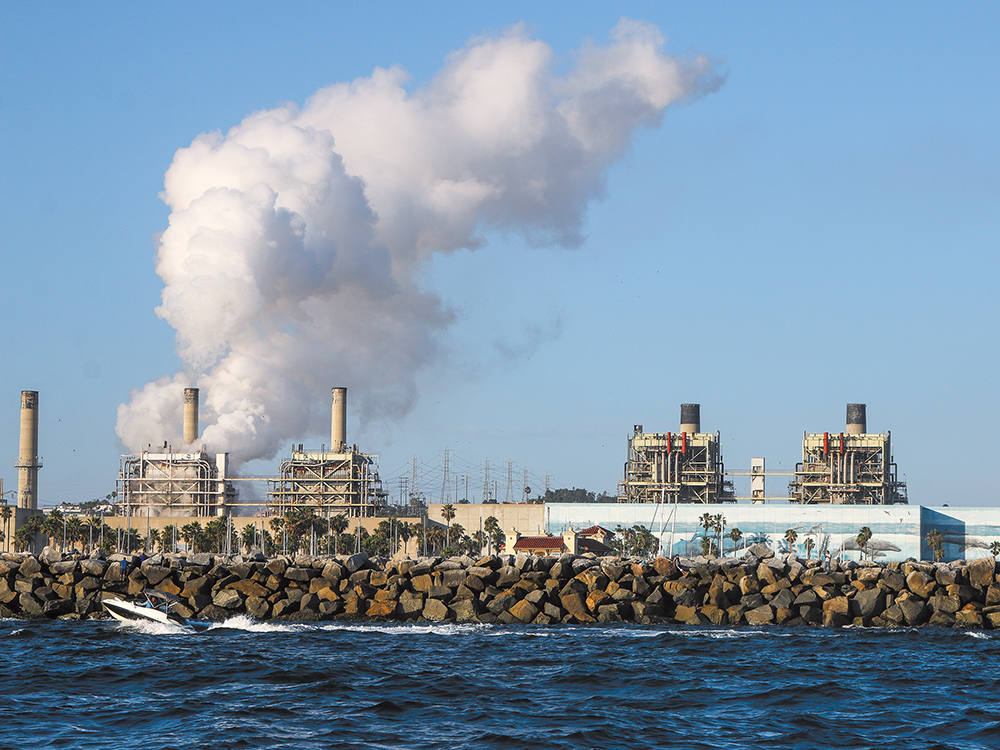 The Redondo Beach AES power plant, including its Wyland whale mural, is shown blowing off steam in this July 2020 photo. Photo by Kevin Cody

The Statewide Advisory Committee on Cooling Water Intakes Structures (SACCWIS) voted, 6-1, last Friday to recommend to the State Water Board that the AES power plant in Redondo Beach be allowed to continue operating through the end of 2023.

The committee’s mandate is to assess whether the Once-Through Cooling Policy — a statewide law passed in 2010 to phase out a process that uses ocean water to cool power plant turbines, endangering marine life — is disrupting the state’s power supply, and then to advise the State Water Board accordingly. The final decision on the extension lies with the Water Board.

In 2010, when the Once-Through Cooling (OTC) Policy was approved, the power plant was scheduled to be retired on Dec. 31, 2020. But in the aftermath of heat waves, soaring air conditioning usage, and rolling blackouts in California, the Water Board voted in August of 2020, to extend the life of the Redondo Beach plant (and other regional plants) by a year.

The City of Redondo Beach, led by Mayor Bill Brand, a strong opponent of the power plant, then sued the board for failing to adhere to environmental regulations. Despite the suit, SACCWIS has decided to recommend an extension of another two years.

“SACCWIS is driven by the Public Utilities Commission and Cal-ISO, and frankly they’re the ones responsible for the failure in planning and grid operation last summer,” said Brand, who maintains the blackouts were due, in part, to energy being exported out-of-state.

Proponents of extending the power plant’s operations argue that heatwaves are getting hotter, and that the state is still transitioning toward its goal of deriving 60 percent of power from renewable sources by 2030. They point to a Public Utilities Commission proceeding last year, which forecasted a potential capacity shortfall of between 2,300 and 4,400 megawatts in the California Independent System Operator (CAISO) Balancing Authority Area, which covers almost 80 percent of the state, beginning in the summer of 2021.

At the SACCWIS meeting last Friday, CAISO representative Jeff Billington shared the results of an analysis focused on the hour after peak hour, ending at 8 p.m., between June and October of 2022, during which he said solar resources are “generally not available.” The study assumed the other Southern California plants — not Redondo Beach — will be online in 2022. It also analyzed planning reserve margins (PRM) of both 15 percent and 17.5 percent , which plan for the difference between total generation available and forecasted demand.

At Friday’s hearing, the SACCWIS considered three alternatives: allow the Redondo Beach to operate through Dec. 31, 2023; extend the OTC compliance deadline by one year, to Dec. 31, 2022; and take no action, permitting no further extensions beyond Dec. 31, 2021.

AES representatives spoke in favor of the first alternative. (AES sold its Redondo plant to a group of 12 limited liability companies last March, but the agreement allows for the plant’s operation through 2023, pending approval from the State Water Board.)

Mark Miller, AES’ market business leader for California, said the company’s mission is “aligned with that of California.”

“As with any transition,” he said of the state’s shift to renewable energy, “there are bound to be bumps in the road, some of which we experienced last August.”

He said the risk of blackouts or brownouts would be “significantly decreased due to the availability of Redondo Beach,” and explained that the plant complies with all rules, regulations, and permitting processes.

The director for planning and operations for AES said it is “particularly important that we have certainty” about operating through 2023.

“Without clarity about the future operational needs of the Redondo Beach facility, critical employees will leave for other professional opportunities,” he said, explaining that operating and shutting down a plant requires specific skill sets and training.

Mayor Brand and three council members spoke in favor of the third alternative. Brand said extensions are worth $40 million a year to AES.

“This is big money for them,” he said. “Blackouts work well for them. Blackouts are like Christmas for AES, and they’ve been playing this game for 20 years.”

He called the area in which the power plant sits the most densely populated area on the California coastline, with 14,000 residents per square mile. He explained that the extension of the plant’s operations cost the city a $4.8 million grant from the California Coastal Commission to restore the wetlands on which the plant was built. He spoke about the actions that have been taken to reduce the possibility of blackouts and brownouts of late, including extending the life of other power plants in the area and authorizing new capacity to come online soon. He added that under the 15 percent RPM, there would still be a surplus in 2022 without AES Redondo, and argued that increasing the PRM is unnecessary.

“These weren’t power-generating issues,” he said of last year’s blackouts. “These were issues that can be cured.”

Newly elected Redondo Councilmember Zein Obagi suggested focusing more on developing storage for solar power than on extending the life of a gas-fired plant, referring to it as a “blighting, polluting, environmentally hazardous power plant.”

“The residents here have expected this power plant to go away for a long time now,” he said.

Councilmember Todd Loewenstein said the hearing felt like Groundhog Day, and the extensions were an inadequate solution.

“You’re paying for units that are unreliable,” Loewenstein said. “Over 1,000 megawatts were unavailable at OTC plants during the shortfall in August of last year, so companies are receiving money to stand by and yet they’re not delivering the services that [they’re] promising,” he said. He added: “So what you’re doing is you’re subjecting residents to years and years of more torture [and] burden rather than actually looking for solutions.”

Councilmember Christian Horvath said his constituents are looking forward to the plant’s retirement, and have been for years.

“It is incredibly frustrating to now see this proposal to extend for an additional two years what is factually the least efficient and the most environmentally damaging of the remaining OTC plants,” he said, adding that the other three gas-fired plants in Southern California have excess capacity. He also said it “still appears you are not taking into consideration procurement of storage and new green generation that Clean Power Alliance is bringing online.”

Deirdre Brand, who identified herself as Mayor Brand’s wife and a member of the board of the South Bay Parkland Conservancy, recalled telling the Water Board they were going to be sued if they voted to extend the plant’s operations, and that they were.

“I think where you’re going to end up … is the courts,” she said. She added: “Your staff report twists itself into pretzels trying to thread the needle of satisfying environmental compliance for this project.”

Melanie Cohen, a Redondo Beach resident who serves on the executive committee of the Sierra Club, said the majority of residents do not want the “deadly polluting power plant” anymore.

“Please go for alternative three,” she said. “It’s a matter of life and death for many.”

Mara Lang, vice president of the South Bay Parkland Conservancy, said AES is not “in the business of the greater good.” Redondo Beach resident Robert Gaddis spoke of “horrific health effects” associated with the plant.

“Please keep our community and our children in mind with your decision,” he said.

An Orange County resident said he did not consider an “all or nothing policy” wise.

“I know these plants can be eyesores and hurt the environment and all those things,” he said. “Renewables are great but it’s clear to me they can’t carry the load yet without other options.”

Jan Smutny-Jones of the Independent Energy Producers Association said: “We are in transition [to renewables]. We did not have sufficient resources to meet that [demand].”

Cyndi Hench, who was on a community advisory committee formed to assess the necessity of a natural gas storage facility in Playa del Rey, said this is a matter of balancing the wants of Redondo residents and the needs of the entire region.

“It shouldn’t take a whole lot of thinking to recognize the fact that other states won’t sell us their power when everybody’s experiencing extreme heat,” she said. “Why would we even consider closing a plant that’s used for backup and emergencies when it makes the difference between having power and not having power?”

The date of the State Water Resources Control Board review of SACCWIS’s recommendation to extend AES Redondo’s operation through 2023 has not been determined. ER