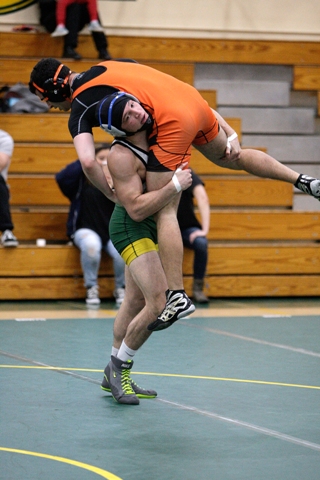 Mira Costa wrestling coach Jimmy Chaney feels this year’s squad may be the best tournament team he’s had since 1993 but knows winning a second CIF-Southern Section Dual Meet championship will not come easy.

After placing second in 2016, the Mustangs will attempt to regain the title Saturday when Redondo hosts the Southern Division championships Saturday at 10 a.m.

Mira Costa closes out league dual meet action in a final tune-up before CIF wyen it wrestles at Redondo Tuesday at 3 p.m.

“I believe there are three strong teams with Irvine, Peninsula and Mira Costa,” Chaney said. “I think all three schools have a good opportunity to win. If we can get our wrestlers all down to the correct weight classes, we will match up really well, and I believe we will pull it out. But, we know it will come down to the wire.”

The Mustangs are led by senior Jean Paul LeBosnoyani, who is ranked No. 5 in the state in the 170-pound weight division, and junior Jared Williams (No. 21, 145-lbs.).

A confident LeBosnoyani is ready to begin his run for a state title but said his team is training extra hard — running sprints, holding team meetings and weekend practices — after narrowly escaping with a 36-33 win against Peninsula last week.

“As a team leader, I have to be there for my teammates and give it my best so they follow my lead,” LeBosnoyani said. “I want them to have the same mental confidence to win a championship as I do. Right now, I have the mindset of being unstoppable and plan to go undefeated.”

Chaney expects to get strong performances from the Gordon twins, Jacob and Tyler, along with Will Curtis, Hanul Kim, Jamie Krigsman, Sam Michelson and Joseph Gebele.

The top five wrestlers in each weight division advance to the Individual Championship on Saturday, Feb. 17-18.

While the boys will be competing at Redondo on Saturday, Mira Costa’s girls team will be in Upland for the Regional Qualifying tournament.

The Lady Mustangs are a young squad comprised of mostly freshmen and sophomores and no seniors. The lone junior is Sasha Medvidovic, who placed third in the state last year. She recently returned to the mat after knee surgery kept her out for most of the season and is hoping to reach the podium again at the State meet.