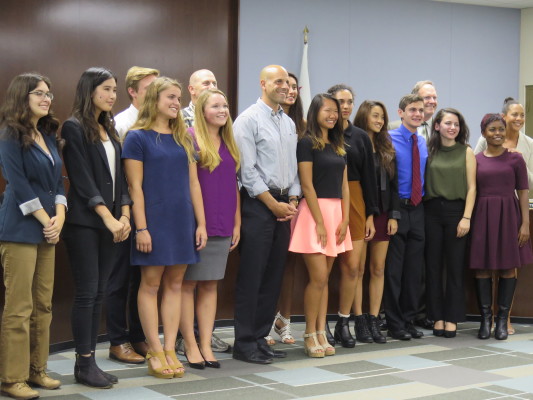 Five-hundred and five tons of trash were pulled from the state’s beaches on the last California Coastal Cleanup Day on September 19. A group of students from Redondo Union High School intend to do their part to not just clean up the mess, but to keep it from reaching the waters of the Pacific to begin with.

RUHS’s AP Environmental Studies class, led by teacher Gillian Moberg and RUHS principal Dr. Nicole Wesley, visited the Redondo Unified School District’s Board of Education on Tuesday night to share findings they’ve made this far in the semester and a plan to reduce waste.

“Cigarette butts and plastic water bottles often end up in our oceans,” said student Haley Nguyen. “The easiest way to prevent this is from the source.”

That source is humans. Litter is pushed from the streets into the ocean often following rainy events, when water runs off into storm drains, such as those at Herondo Street or Avenue F.

Much of the trash is cigarette butts and broken down plastics, and animals often mistake these items for food; the class cited an estimate from the U.S. National Oceanic and Atmospheric Administration indicating that cigarette butts are related to at least 100,000 marine mammal deaths and one million seabird deaths each year.

The students’ idea to help curtail the proliferation of plastics in our water is simple: Cut down on plastic usage, starting with the RUHS campus.

During the presentation, speakers noted that more 1,100 disposable plastic water bottles are sold on campus to students each day, totaling more than 207,000 bottles each year.

The idea to curtail plastic bottle usage is to get reusable bottles into the hands of every student on campus. “They’re sustainable, they last longer, and they won’t end up in marine debris,” one student said. “Educating students is one strategy, but providing them will alternatives is far more effective.”

Members of the school board were in full support, only asking where students are able to fill up their reusable bottles on campus.

“I’ve used the fill station at the administration building before, but heard from my daughter that she doesn’t know where they are,” said board member Brad Waller. “If there were a few more filling stations, that would be far more convenient,” he said. Dr. Wesley agreed, saying that the school plans to add more fill stations to the three already on campus.