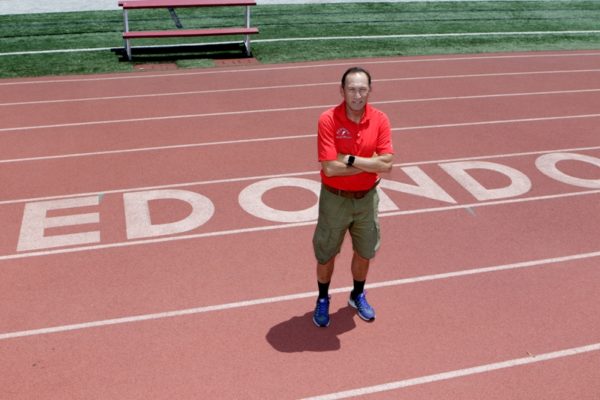 “In the United States, there are more high school students competing in track and field than any other sport,” said Leetch, the Redondo Union High School track and cross country coach. “It’s been most enjoyable for me seeing the growth of the kids during high school. Sometimes it’s not our star athletes. We had one boy come out for cross country who was like an advanced 6th grader as a freshman. Watching them grow and providing athletes with self esteem is a tremendous feeling.”

Leetch recently returned from Clovis after watching his girls 4×100 relay team and junior pole vaulter Amari Turner compete in the State Championships. Turner cleared the bar at 12 feet, 6 inches after one miss to take second place. The winner cleared the same height but with no misses.

“The California State Track Meet is one of the greatest sporting events in the country,” Leetch said. “There are no divisions at our State Meet and it is head-to-head competition with no ballots, no polls in the most populous and significant state in the nation. To qualify for this meet is very difficult with no mercy along the way.”

The State Championships have become a yearly event for Leetch and his top athletes, but he has paid his dues over the years.

Leetch is a 1980 graduate of RUHS, and is the school record holder in the mile, winning a CIF Championship as a senior.

At El Camino College he won the state championship in the metric mile (1500 meters) in 1981.

In 1982, Leetch transferred to Kansas State University where he received All Big-8 honors in both track and cross country. Following college, he ran for the Adidas national team and the Santa Monica Track Club. In May of 2005, Coach Leetch was inducted into the El Camino Athletics Hall of Fame.

Leetch owned a degree in marketing and went on to own three restaurants. He and his wife Kirsten have two children, 10-year-old son Bobby and six-year-old daughter Quinn.

“Whatever Bob did, he sunk his teeth into,” said Kirsten, who works for Student Sports in Torrance. “After he graduated from college I went to Kansas to help with his restaurant. While he’s the idea guy and a great marketer, we have a good union and partnership.”

Kirsten O’Hara Leetch is an accomplished runner in her own right. A 1984 graduate of Palos Verdes High School, she remains the school’s only state track champion. She was a 5-time Division 1 All-American in cross country and track at UC Berkeley and a member of the Bear  Hall of Fame. She placed third in the NCAA track championships and second in the TAC (now known as the USATF Championships) for 10,000 meters in 1985.

Along with coaching Redondo’s cross country team, she continues to train and compete with Janes Elite Racing. In April, she broke a 14-year-old American record by 12 seconds for women over the age of 50 in the 10,000-race at the Mt. SAC Relays.

After moving back from Kansas, in 2005 Bob learned that Redondo track coach Ken Welch was retiring.

“I felt Redondo should have a strong program since the school had multiple heritages but track was missing,” Leetch said. “In fact, at the time the only strong sport at Redondo was volleyball.

I wanted track and cross country to become franchise sports at Redondo. There were great runners available and I felt the community and school deserved to have strong teams. And I wanted to create a great environment for kids.”

After a meeting with Assistant Principal Ben Dale and Athletic Director Les Congelliere, Leetch was hired. Congelliere told him that track and field could have the most impact of any athletic team on campus.

It took a few years for Leetch to find success and he became depressed. Then came Chloe Curtis whom Leetch said provided the highlight of his coaching career.

“When Chloe Curtis won the first State Championship in 2010, it was a signature moment,” Leetch said. “She had played volleyball, soccer and other sports but became one of the key pieces of the puzzle to build a program around.”

After losing at the State Meet as a junior in 2009, Curtis vowed to not lose again. The following year she went 1-2 with teammate Lyndsey Mull in the 1600, posting a time of 4:46.63 that remains a school record.

“It was 108 degrees that day but Chloe kick started our program by winning the State championship,” Leetch recalled. “We had a National top 10 ten team that year thanks to her.”

Curtis was a three-time CIF track champion and TrackCEO finalist. She ran the anchor leg for the Sea Hawk’s National Record setting 4×1600 relay team and led the cross country team to a State podium finish for the first time in school history.

“Bob had a huge impact on my life,” said Curtis, a Loyola Marymount alum. “He’s really passionate and a great motivator. He puts everything he has into coaching.

“I dealt with anxiety but Bob made me believe winning State was attainable and the culmination of hard work.”

Curtis began her running career after soccer practice one day, when she went to watch friends who were involved with cross country. She said it looked fun.

“My most memorable moment was winning State, but I also remember my sophomore year and it being crunch time for CIF,” Curtis said. “All along, even when I was a freshman, Bob trained us at a higher level, which helped our mental outlook. He’s intense in a good way, knows the mental game and loves the strategy of a race.

“In a meet against rival Palos Verdes, his strategy was to have our top runners hang back. Lyndsey Mull and I slowed the pace down for the first two laps. On the third lap, we sprinted the entire lap. The PV runner was so confused, she ran out of gas and we won.”

“Until Chloe Curtis made the State 800 final in 2008, it had been 27 years since a Redondo athlete qualified for State,” Leetch said. “Since then we have advanced two or more athletes every year. It’s the hardest meet in the country to make.”

His 4×1600 relay team of Cara Ulizio, Kayla Ferron, Rachel Bush and Lyndsey Mull set a U.S. Prep Federation National Scholastic and CIF record with a time of 20:1.38 at the Mt. SAC Relays. The group also ran sub-5-minute miles, thought to be the first time a high school had four athletes on the same team accomplish the feat.

Ferron, a 5-time CIF track champion and 4-time team podium finisher in the State Cross Country championships, also placed 10th at the Nike Cross Country Nationals before competing for the University of Arizona. 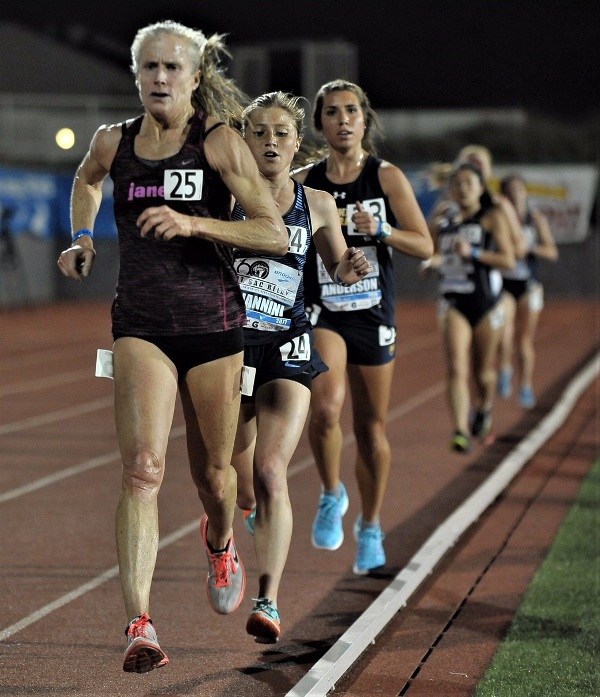 “If I hadn’t had Bob as my coach, I would not be where I am today,” Ferron said. “He pushed me hard, always believing in me even when I didn’t.”

A softball player growing up, Ferron didn’t think of running as being a sport. Leetch made her dreams of running at a competitive level become a reality.

“He’s an amazing coach and whenever I’m in town, he’s one of the first people I visit,” Ferron said. “One of coolest moments came when we broke the 4×1600 National Record. Cara Ulizio, Rachel Bush, Lyndsey Mull and myself were all programed together. Watching everyone at their best was so exciting and a time I’ll never forget.

“My most memorable event came when I broke 5 minutes in the mile for the first time. I thought I was only an 800-meter runner but Coach Leetch kept saying I was a miler. I was in shock after I broke the 5-minute mark. Bob sees the potential in his athletes and works hard for them to become their best.”

“Tate Curran had an amazing senior year in 2017, Leetch said. “He won the Nationals after snapping his pole in his second attempt. He fell hard but made the height on his third attempt. He couldn’t walk for two weeks. He later won a gold medal in Peru.”

Leetch recalls sophomore Cody Schmidt inspiring the team after running the mile in a dual meet against Mira Costa in 2007.

“He easily won,” Leetch said. “Cody told me after the race ‘If I don’t run as hard as him (Mira Costa’s David Schwartz) I’d be letting him down.’”

Leetch’s cross teams have also excelled. In 2015, Amber Gore broke every one of Kirsten Leetch’s high school records during her State championship season.

“My first boys X-Country team in 2008 consisted of a bunch of hungry individuals,” Leetch said. “They were skateboarders who came in with long hair and Puka shells around their necks.

Leetch admits being tough on his kids with a lot of constructive criticism. He recalls one of his annual training trips to Big Bear.

“A group of girls told me to quit treating us like girls, treat us like you do the boys,” Leetch said. “Evan Malone-White sat with the girls who said we want what you have so they began running with the boys.”

Leetch said when he was in high school, he was better in track but always looked forward to the cross country season.

“Cross country is a part of track but there is more of a family atmosphere among the runners,” Leetch explained. “I love training and being with the kids. They look forward to cross country more because there’s no place to hide. Track has more of a signature aspect to it  because it caps the season. Track teaches strategy while cross country makes you tough.”

Leetch is one of the few track coaches who cut kids who he considers to be slackers, ones with attitudes or followers who have never made a decision in their life.

He is thankful for his other head coach Julie Ferron, who is the team’s on-campus coach, and specialty coaches Dave Dill (pole vault) and Jake Weintraub (throws).

He also believes academics plays a big part in his program. Redondo hands out a Bob Leetch Scholarship each year for athletes with a 3.3 GPA or higher.

“When we started at Redondo, we had maybe 12 athletes,” Kirsten said. “Now it’s over 100. The first couple of years were tough then Bob became passionate again. He started a Boosters Club and was instrumental in the Measure C Bond passage in 2008 for the athletic grounds on campus.”

Leetch said he isn’t sure how long he’ll coach at the high school level because he wants to spend more time with his two children. But son Bobby said he hopes his dad remains the coach until he is through high school.

“I’d like to be remembered as making a contribution to my community and every year having new kids come into the sport,” Leetch said. “I’ve wanted the program to be self sufficient. It’s unusual to have a free sport at Redondo High.” 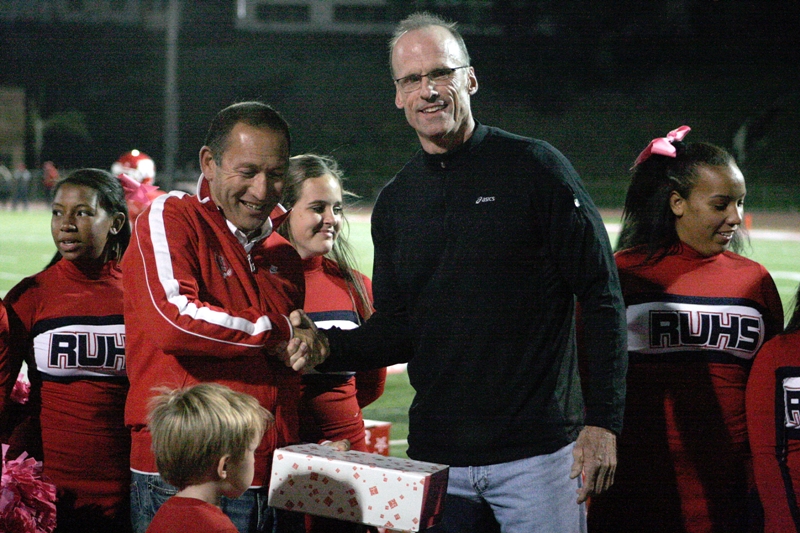