Robinson was video game maker, Making it at the Beach cartoonist 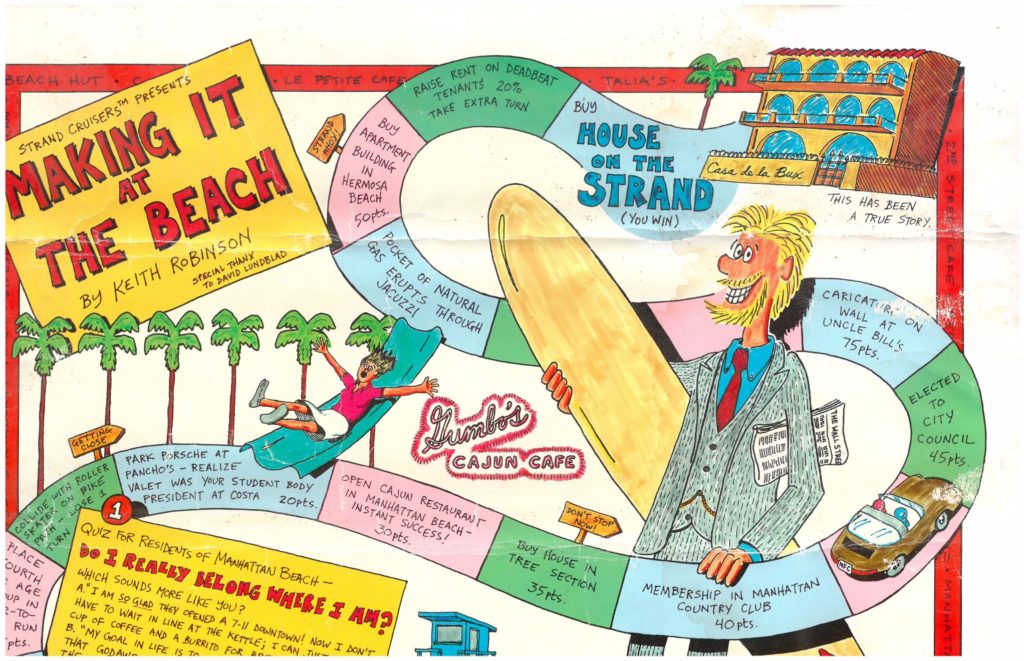 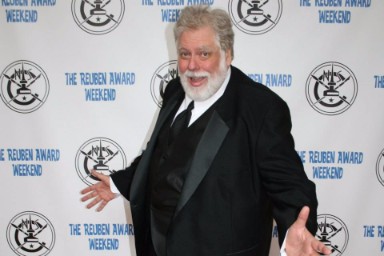 In 1985, Keith Robinson entered a cartoon in Easy Reader’s annual Anniversary Writing, Photography, and Cartoon contest. The cartoon, titled “Making it at the Beach,” spoofed the childhood game of Chutes and Ladders. The first square read “Move out of parents’ house.” The final square read  “Buy house on The Strand — You win.” Squares along the way included “Membership in Manhattan Country Club — 40 points.” And “Park Porsche at Pancho’s. Realize valet was your student body president at Costa — 20 points.”

The cartoon was awarded first place in both the writing and cartoon divisions.

Over the next three decades, “Making It” appeared weekly on Easy Reader’s Letters to the Editor page. At its height, it was also distributed to over 70 other newspapers by United Press Syndicate.

Normy, the main character explored the timeless question of whether ‘tis nobler to “get a job” or “get a tan.” Robison wielded an absurdist and sometimes surreal humor with sharp wit and innate warmth.

Robinson based the loveable layabout Normy (his dad’s name), on himself, and modeled the other characters on lifelong friends and video game industry colleagues.

This week, for the first time in over three decades, Normy does not appear on Easy Reader’s Letters to the Editor page. Robinson passed away June 14, at age 61, from complications related to congestive heart failure.

The lifelong Manhattan Beach resident also created cartoons that appeared in Playboy and in several book collections. He authored the humor books “Love Me, Love My Cat!” “Love Me, Love My Dog!” “Why do Dogs do that?” and “Making It: A Survival Guide For Today.”

“Keith was very sharp, very funny, a multifaceted person with lots of talents and interests in lots of areas,” recalled Steve Ettinger, a friend and fellow videogame programmer in the early 1980s. “He was a very sociable, inclusive kind of guy.”

Robinson cut a distinctive figure in the beach cities, tooling around in a 1964, yellow Mustang convertible, and hosting heavily attended backyard parties with exotic and funky themes. One party featured a large spotlight that projected Jackie Gleason’s face onto a neighboring house throughout the night.

In 1981, Robinson and a group of programmers at Mattel, known as the Blue Sky Rangers, created games for Intellivision, the Hawthorne toy manufacturer’s game console. Mattel kept their real names secret to thwart rival Atari’s attempts to lure them away. Intellivision games included the now legendary Astrosmash, Night Stalker, and Sea Battle.

“We were in our 20s and we’d work all day, and then go down to the old Red Onion at Redondo Beach Harbor and party. We had such an intense time, such a great time,” Robinson recalled in a 2014 Easy Reader interview.

Robinson had a master’s in computer science from UCLA and a background in television special effects. He worked on the 1978 “The Star Wars Holiday Special” for CBS. But many of his fellow programmers were self taught.

“Mattel was not sure how strong the market would be, so they didn’t want to spend money to hire all experienced programmers,” Robinson said.

One programmer was fresh from high school; another quit his job playing in a piano bar at a Tony Roma’s to spend a few weeks learning his new craft at Control Data Institute.

Dave Warhol, a close lifelong friend of Robinson’s, had been studying music composition at Pomona College and working in the school’s computer room when he saw a Mattel job notice. He conveniently forgot to post the notice for general consumption and went after the programming position himself.

“Today, people work at home, online. Then, although we were a computer company, we were working together, 60 to 80 people on one floor. You could look over the cubicle and see what the person next to you was doing,” Robinson said. “Now the maps, backgrounds, and characters are done by tons of people,” Robinson said. “Back then, one person would spend three to five months doing everything. There’s kind of a personality behind the games because you’re looking at the product of one person.”

That free-wheeling era ended with the video game crash that followed the 1983 bank failures. Mattel’s videogame division was shut down in January 1984.

Ettinger credits Robinson with keeping the Intellivision community together. He herded them to classic gaming expos and hosted an annual pizza party on the anniversary of the final round of the Intellivision layoffs.

The games can be played on modern platforms such as PlayStation, Xbox, Nintendo DS, iPhone and iPad, and on Intellivision Flashback, an old-style console that recreates the vintage video game experience.

Warhol eulogized his sunny, outgoing friend the day after his death with a posting on social media. He wrote that Robinson “created communities of friends and professionals with his unstoppable humor….Those who knew him have lost a dear friend and those who never met him lost something even greater. We will miss you dearly Keith, and every time we think of you we will smile.”

Robinson is survived by his father Norman Robinson and stepmother Sally of Manhattan Beach and is preceded in death by his mother Margie Robinson. Services are pending.