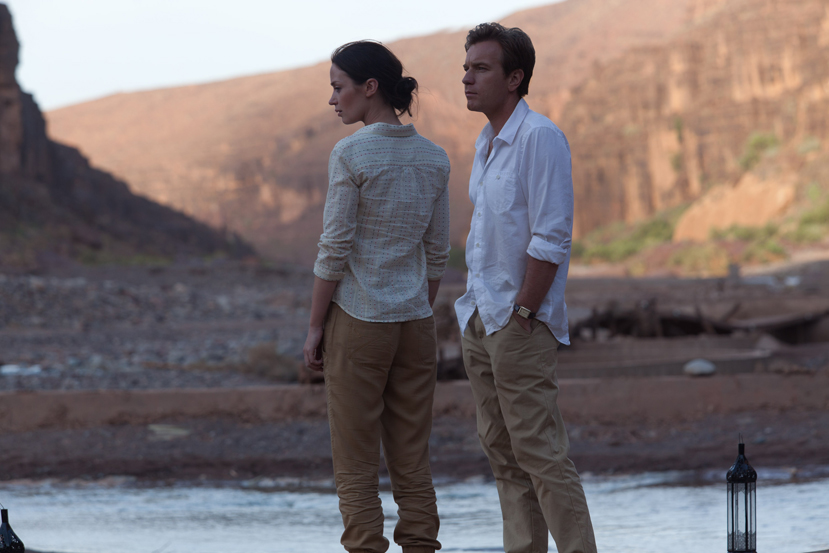 Emily Blunt and Ewan McGregor star in Salmon Fishing in the Yemen.

Director Lasse Hallström and writer Simon Beaufoy have taken their most magical talents, sprinkled on some kind of stardust and delivered a boy-meets-girl fairy tale within an unlikely context. “Salmon Fishing in the Yemen” tells a story where everything is possible and nothing is possible.

A delusionally idealistic Yemeni Sheikh has discovered the joys of fly fishing on one of his Scottish estates and is determined to bring the sport back to his home in Yemen. Enlisting the help of the British company representing his interests, in the person of the comely Ms. Harriet Chetwode-Talbot, the Sheikh seeks out the leading expert at the fisheries ministry, Dr. Alfred (Fred) Jones. Jones, however, is totally uncooperative; as far as he’s concerned this is ridiculously ludicrous. And it is there that the fishing extravaganza lays dying until, in need of good PR in the Middle East, the Prime Minister’s chief press liaison, Patricia Maxwell, hears of the project. Dr. Jones will assist the Sheikh or be sacked.

Dr. Jones is a serious scientist content with a very dull life. He and his wife Mary share little in common and communicate even less. When, one day, he comes home and finds her packing, he is bowled over to discover that she will be leaving the next day for a job in Geneva, never having told him of her plans in advance. Perplexed, lost and without any real choices, he plunges ahead on the salmon project and bit by bit he is seduced –by the idea, by the Sheikh, and ultimately by the otherwise engaged Ms. Chetwode-Talbot. This is not just a fantasy project invented by a man with far too much money, but a project by a visionary who sees the fishing as spiritually symbolic and the building of the river and dam as a way to change the topology, the agriculture and the people of his land.

Deliciously, Hallström intertwines his love stories so softly that everything sneaks up on you in the same way that it sneaks up on the protagonists. Now this is not to say that you can’t see the Harriet/Fred scenario coming a mile away, but there are rocks in the way that make their eventual attraction troubled. This is a boy-meets-girl, boy-loses-girl, boy-gets-girl ensnarled in a girl-meets-boy, girl-loses-boy, girl-gets-boy story where different boys and girls are involved in both the meeting and the losing, making the getting all the more complicated but satisfying.

The direction is expert and Hallström keeps everything moving as he deftly unwraps each character, bit by bit, until no one appears as they were at the beginning, with the exception of the diabolical Ms. Maxwell whose draconian threats to Dr. Jones set everything in motion. The script by Beaufoy adapted from Paul Torday’s delightful novel, paints a world of politics, cynicism, spirituality, love, hope and terror, a cauldron of emotion for the actors to dive into, and Beaufoy, who has written several movies, succeeded in melding them all.

And that dive for all the actors is a 9.7 with a 4.5 difficulty. They’re wonderful, each adding another dimension to the others. It is easy to bring attention to the work of Conleith Hill, a British character actor known primarily for his stage work and his role as Lord Varys on “Game of Thrones.” Hill plays Dr. Jones’ boss, the slothful political appointee who would like only to continue to do nothing and retire from his boring job at the Fisheries Ministry at full pension. His laziness and survival instincts are on full view in his bullying of Jones and his toadying to Ms. Maxwell. Hill’s bloated civil servant is a masterful portrayal, hateful and hilarious in easy turns. Amr Waked as the Sheikh sympathetically brings life to a man of great wealth, great hope and frivolity. He makes it impossible for us not to care about him or his quixotic project funded by such unfathomable wealth.

Kristin Scott Thomas as Ms. Maxwell, a press aide whose creative aggressiveness would send shivers of envy down the spines of the most diabolical Hollywood agents, steals every scene she’s in, whether it’s just a clip of her head on an email or her determined stride into 10 Downing Street. Watching her negotiate a press release on the phone while she’s sending her children off to school with a withering glance and threats of dire consequences for their less than stellar behavior is truly something to behold. Ms. Thomas, a dramatic actor of great renown, is also a comedienne of great range.

Emily Blunt is a revelation as a young woman who has command of her domain and is, at the same time, the vision of fragility as she tries to work through a tragedy in her personal life. She has that unique ability to make us uncertain as to which direction she will go. But as good as everyone is, the lynch pin to this film is in the hands of Ewan McGregor as Dr. Jones. McGregor is blessed with the kind of looks that can be rather plain, not unattractive, just plain, or movie star handsome depending on the role and the personality of the character. In this case, McGregor’s Dr. Jones starts as an ugly duckling and as he grows as a person and a (minor) risk taker he becomes warm, open and handsome. It is the discovery of life outside of the Ministry and the confines of his frigid domestic situation that begins to change and to change him. Always comfortable with a fly fishing rod, he begins to see the possibilities and challenges that life can bring if he applies the same patient understanding to it as he does to waiting for a tug on his line. McGregor can be effortlessly charming or prickly and rigid; his inner beauty or conflict reflected on his face. Almost always good regardless of the material (see review this week of “Perfect Sense” and recent review of “Haywire”), it’s terrific when he’s handed a script truly worthy of his presence.

More than a love story or an awakening, Hallström has given us something of beauty, depth and dimension beyond the human stories he tells. Like the salmon the Sheikh craves, everyone swims upstream to great reward.

Opening Friday March 9 at the Hollywood ArcLight and the Landmark Theatre.

Neely also writes a blog about writers in television and film at www.nomeanerplace.com