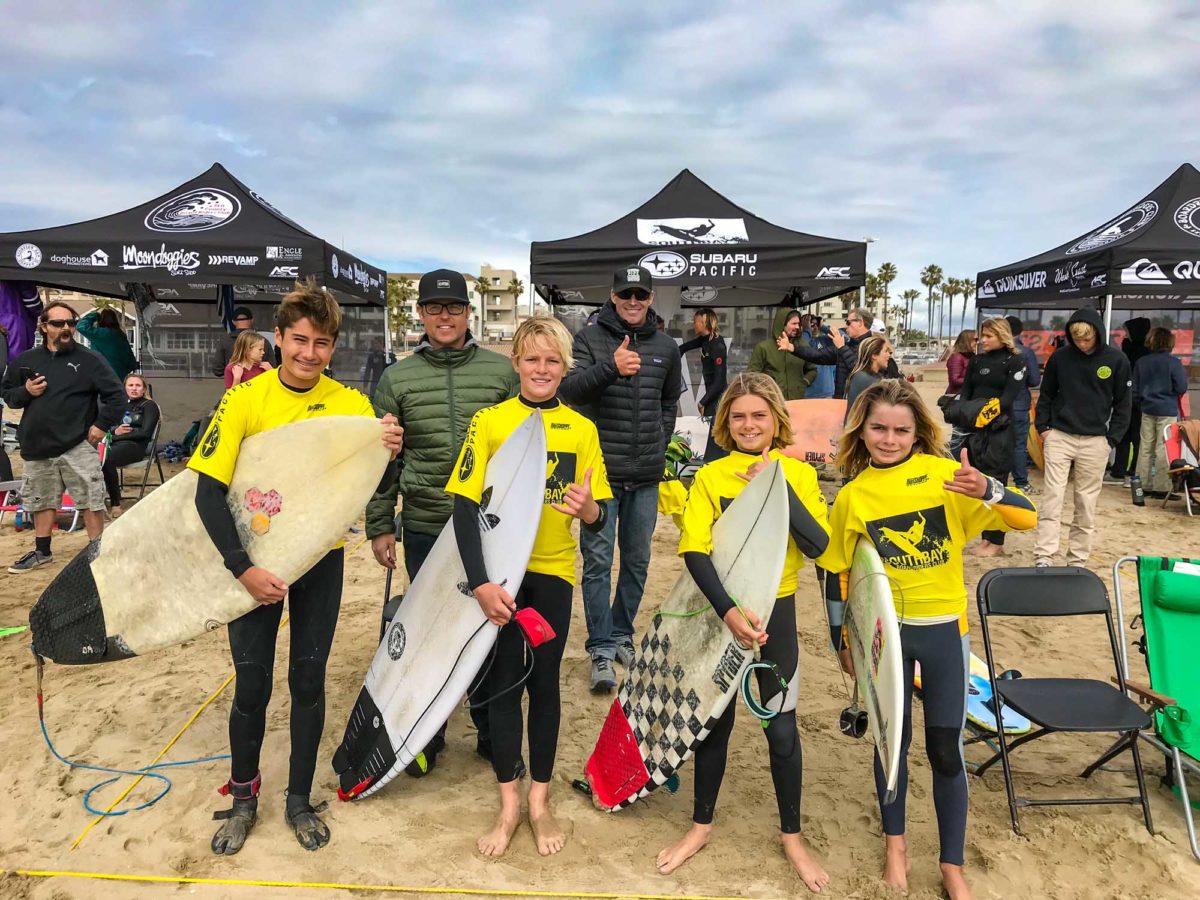 by Dickie O’Reilly and Kevin Cody

A South Bay Boardriders Club goal when it was founded in 2008 was to resurrect the South Bay’s reputation as a center of California surfing, a position it owned during surfing’s Golden Years, but had relinquished to Huntington Beach. That year, the club’s application to the Malibu Surfrider contest was rejected on the grounds that the club’s team wasn’t competitive.

SBBC sent 28 surfers to the contest, which was broken up into seven divisions, ranging from 14- and under to 40-and-over, plus an open woman’s division. Four-member teams surfed relay-style in one-hour heats. Only the surfers’ best waves were scored.

SBBC jumped out to the lead three minutes into the first heat when former pro-Chris Wells caught the contest’s first wave and scored an 8.3, one of the highest scores of the day. Fellow 50-plus teammate Ty Cukr followed with a front-side off the top that earned a 7.2, to win the heat.

Matt Pagan, the winner of the SB Boardriders 2011 Big Wave challenge, scored a team-high 8.57 after ripping a right the length of the contest zone. Kelly Zaun added a 7.07 with a long left and brother Dane Zaun racked up 14.86 points after “claiming” a 7.43 wave. (Each team designated a “double whammy” surfer, whose score was doubled when he or she “claimed” a wave.

In the boy’s 14 and under division, Manhattan Beach Grand View School 11-year-old Kai Kushner, double whammied a solid 5.6 score, which teammate Gavin Lusby nearly beat with a backside, top turn on one of the day’s more solid lefts, which he rode into the pier.

South Bay held on to its slim lead through the final, 15 to 19-year-olds heat. South High’s Parker Browning claimed a double whammy on a 6.3 wave and Shane Frontino scored a 6.07. Cody Purcell secured the team a 3 point victory with a 5.4 score on his final wave.

The next, local SBBC contest is Saturday, March 24 at 26th Street in Manhattan Beach. For more information about the club visit SouthBayBoardriders.com.