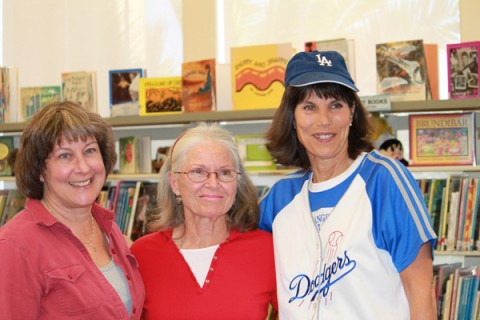 After living in Manhattan Beach for 45 years, the daughter of legendary Lou Costello never imagined she’d be attending a performance of her father’s most famous comedy routine at an elementary school in her neighborhood.

“Nothing would please my dad more than for something like this to occur,” Humphreys said. “I know that for a fact. He loved children.”

Humphreys had no idea that for the past eight years, a part of her father’s legacy has been kept alive by library media specialist Heidi Snively, who performs the comedy skit 31 times each year — once for each class — during the first week of baseball season. With baseball bats and hats for props, the teacher of each class plays Abbott opposite Snively’s Costello in an informal performance during each grade’s weekly library time.

“After I first started working here 10 years ago, I found reader’s theater scripts while I was cleaning,” Snively said. “I thought they’d be cute, but they weren’t. So I went online and found an Abbott and Costello version.”

Last December, Humphreys’ neighbor, whose three children attend Grand View, stumbled upon her celebrity heritage after unwittingly giving her a Christmas ornament that played the “Who’s on First?” routine. The neighbor told Humphreys about Snively’s performances.

“My neighbor said maybe you’d like to go,” Humphreys said. “It was quite an event.”

Humphreys, along with 20 third graders, gathered in the school library to watch Snively perform what Time Magazine in 1999 called “the greatest comedy skit of the 20th century.” Principal Rhonda Steinberg made a special appearance as Abbot for the occasion.

Humphreys laughed when at the end of the routine a student asked: “Which one was your dad? The fat one or the skinny one?”

“We were in awe of Paddy and she told some wonderfully funny stories about her dad,” Steinberg said. “She was teary-eyed by the fact that this has been occurring for years.”

Humphreys was a toddler when her father moved the family out west from New Jersey in 1940, after the huge success of a nationally syndicated radio appearance that prompted movie execs to invite Abbott and Costello to Hollywood.

The pair brought the “Who’s on First?” routine with them from the vaudeville stages of the east coast. The skit’s comedy arises from a mix-up in the fast-paced exchange between two men discussing the names of players on a baseball team.

“We’re not as fast,” Snively said. “We want the children to understand the joke. For the little kids, I explain, ‘There’s a fellow named ‘Who,’ another named ‘What,’ and another named ‘I Don’t Know.’’ It feels like it spoils the joke, but the little ones need it explained.”

Afterward, Snively shows the students a YouTube video of the real Abbott and Costello performance.

“The children laugh first at their teachers and then at the real skit,” Steinberg said.

In 1956, Abbott and Costello became the first non-baseball-playing people to be inducted into the Baseball Hall of Fame in Cooperstown, New York.

Growing up with her father’s fame was normal to Humphreys.

“As I got older, the thing that amused me the most was when they’d mess up,” she said.

Costello died of a heart attack in 1959, three days before his 53rd birthday.

“I was star struck,” Snively said. “There was a big smile on my face. She was so gracious and said the show was so special for her keeping her father’s work and legend alive. But I can hardly take credit for that.”

“It made my day,” Humphreys said. “In fact, it made my year and everything else. My dad would be so proud.” ER