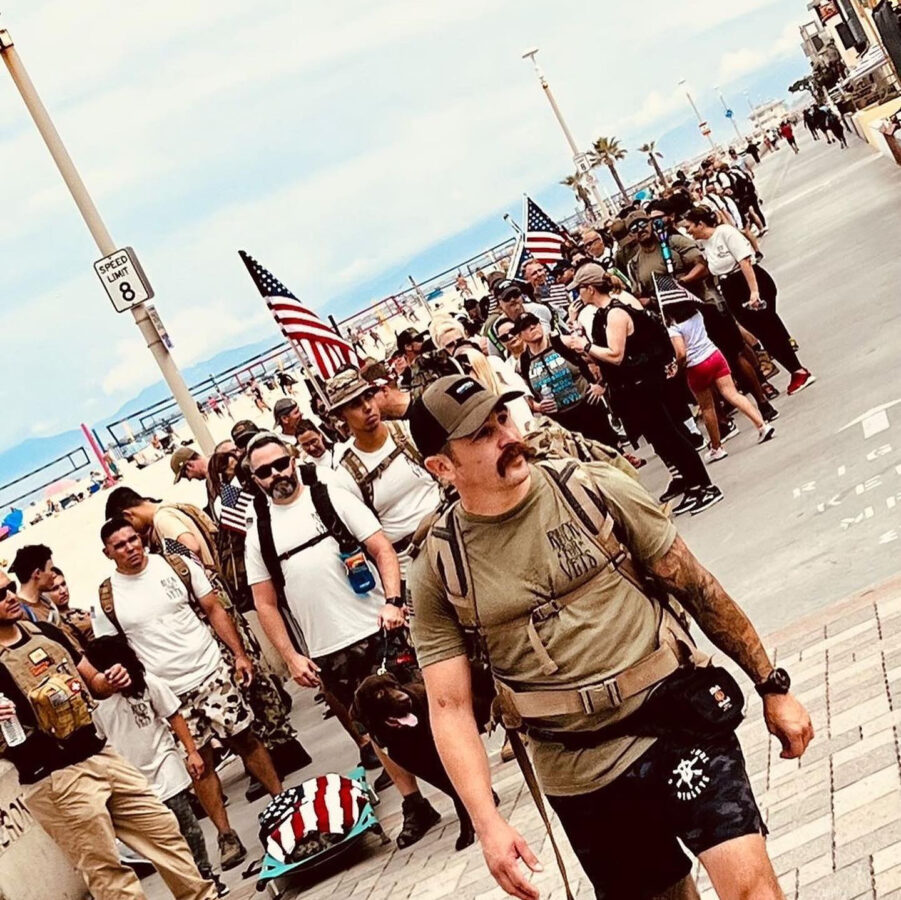 “Our open water swim club members – all in our 60s, 70s, and 80s – struck up conversations with some young vets we met working out at Torrance Beach. The only war vets we knew previously were guys who fought in Vietnam. Modern day vets who served after 9/11 were not even on our radar screen.”

“I remember one day,” swim club member Jane Affonso said, “our vet friends overheard us say we needed to do weight training, but couldn’t. Our gym had closed because of the pandemic. Two days later the vets set up a beach weight-training program for us, using rocks instead of free weights.”

During a beach workout one of the vets, Will Jones, invited the swim club to join a Ruck for Veterans March. 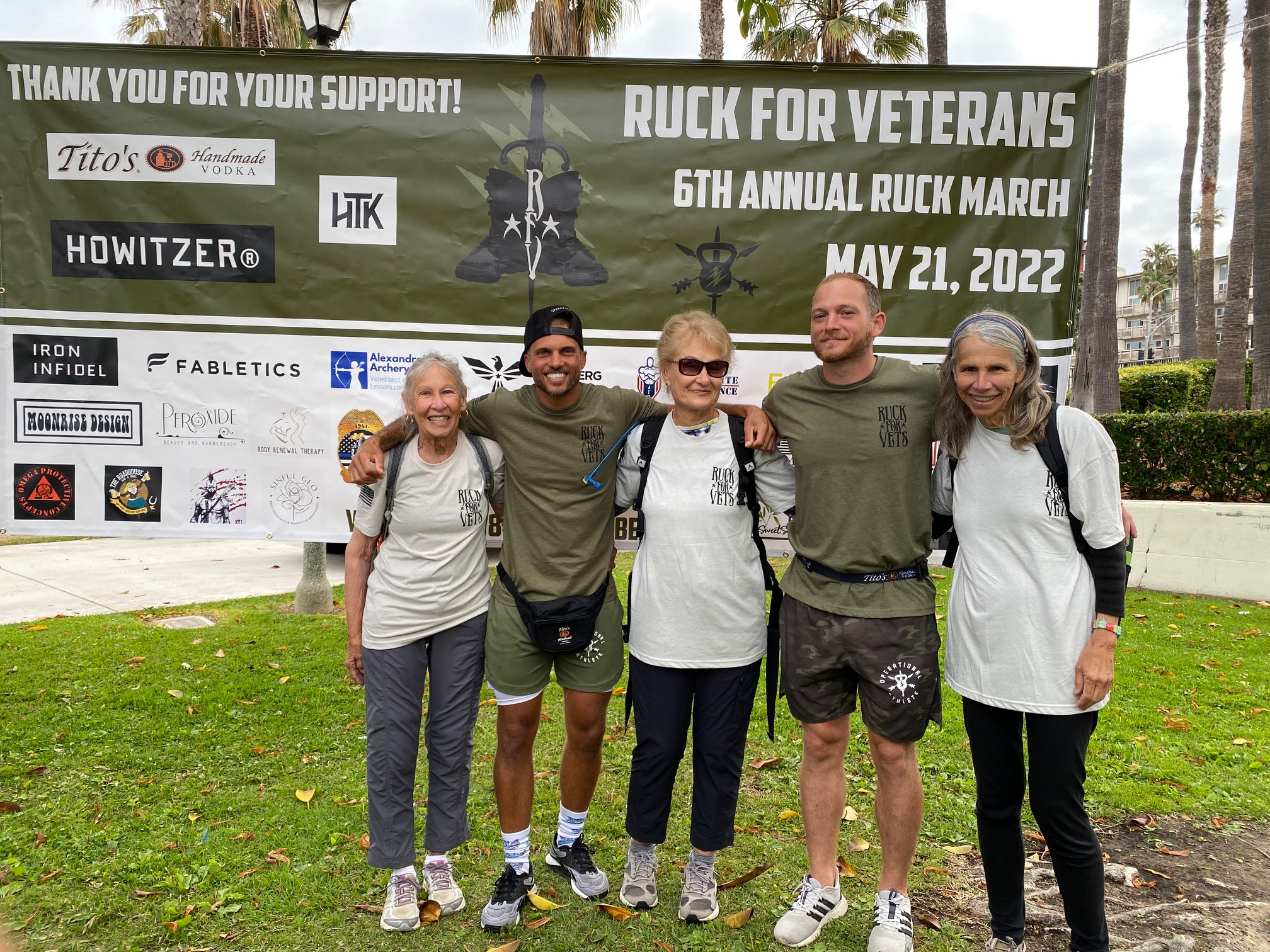 “We had never heard of a ruck march, but we were enthusiastic when we found out the proceeds would go toward helping war veterans. We also decided it might be good for us to do something out of our comfort zone.”

“Ruck march” is a military term, Jones said “Basically, it’s a fast-paced march of soldiers carrying heavy equipment. It’s a way to prepare for moving troops and gear from one location to the next.”

Jones, a Ruck for Veterans board member, said the organization holds marches all over the U.S. to raise awareness in the community about specific issues war veterans face.

Caplan was intrigued by the march’s after party, at the Redondo Beach VFW parking lot. “We were struck by the family-fun atmosphere, the joy the vets expressed being together, the absence of politics, and the kindness shown to us,” she said.

In 2004, two months after infantry basic training, Will “Boom” Jones found himself in Baghdad, Iraq. He quickly learned that small arms fire, hand grenades, mortar rounds, and Improvised Explosive Devices (IEDs) would become a part of his life.

“We never knew what was going to happen. We had no choice but to live in the moment,” Jones said.

He earned his nickname, “Boom,” after surviving three explosions.

“The first was on one of my early missions. I was on a rooftop above the Tigris River looking for threats. At one point my squad leader came up and told me not to stay in one spot too long. Seconds later I made a move. Then BAM! A mortar round landed in the exact spot I’d moved from. I was knocked off my feet. My team heard the explosion and thought I was done for.”

On another mission, as Jones’ unit was returning to base, the vehicle he was in was hit by an IED. “I was in the lead vehicle,” he said. “We were moving at a snail’s pace on a road laden with IEDs. I remember the sound of that metallic click and then the explosion. Our vehicle was on fire; the driver was wounded. We were still taking fire and were forced to shoot our way out.“

Some of his friends were not so lucky. “One day I was eating a sandwich heaped with mustard. My buddy Ryan Green was making fun of me because I had mustard all over my face. We had been waiting to see who would be called out for combat patrol. Green was called. I stayed behind on base, just chilling out. Later I got the news: four of our guys were killed in action – Ryan was fatally wounded.”

“I had to gather up the gear and personal effects of my friends to send home to their families. And then came the hardest part. Together with others in my unit, I stood in formation on the flight line while the flag draped coffins of our friends were placed in a helicopter to be shipped home.”

The stories of Jones’ deployments are etched in ink on his body. “FREEDOM” is tattooed across his back, shoulder to shoulder, in honor of Green who had the same letters on his back. Tattooed on Jones’ right arm is the name of his unit — “2nd Platoon, Bravo Company, 1st Battalion, 8th Cavalry Regiment, 2nd Brigade Combat Team, 1st Cavalry Division.”

Jones spent four years in the Army. What got him through those years, he said, “was the men serving beside me. We had a camaraderie that’s indescribable. We had each other’s backs.” J

“Everything was business as usual back in the States. People had their jobs, their families, and their friends to keep them occupied. I had just spent four years of never being alone. At home I felt like I was on a different planet. I had to find a new mission.” 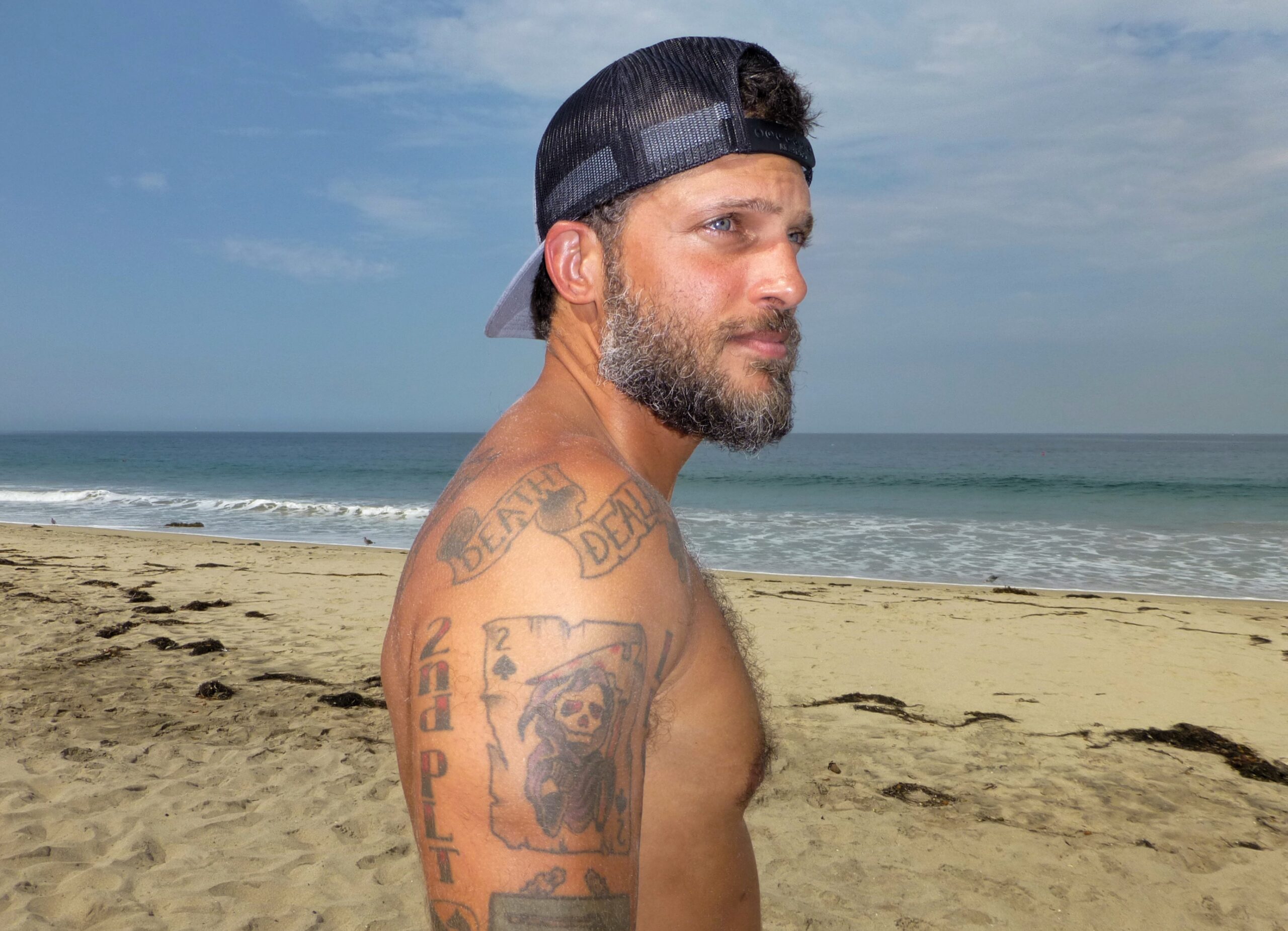 When asked if he suffered from PTSD, Jones laughed. “Oh, yeah, big time,” he said. “Sometimes, without warning, I’d be around civilians and find my anxiety level hitting the roof. I gradually learned coping skills, but it wasn’t until I found other veterans that I had a sense that maybe I was going to be okay.”

Two years ago, Jones met Matt Pech, founder and executive director of the South Bay Ruck for Veterans. “Getting involved with Ruck for Vets has given me a sense of purpose and community – all the things I was missing when I got out,” Jones said. He and Pech work out together weekly at Avenue C with other vets and spend many hours organizing fund-raising events.

Pech served 15 years in the Army, mostly in Special Forces. He has been active in Ruck for Veterans since 2017.

“Now being our sixth year we are finally an official 501c3. Our aim is to bring awareness to veteran’s mental health issues. Each year we focus on a particular concern. Early on, our focus was on the children of fallen service members. One year we focused on veteran suicides.”

Pech said the current suicide rate for vets is over 17 a day. He is no stranger to the issue. “Six years ago I was so depressed I wanted to kill myself,” he said. In one combat mission, a fellow soldier died in his arms. “I remember crying and calling my wife to talk about it, but when you’re deployed you’ve got a job to do. There’s no time to grieve. I was fighting for my own survival and didn’t have the time to process what was happening.”

When he returned home, Pech said he felt as if all of his deployments had caught up with him. “PTSD is a real thing. I was suffering mentally. I was abusing alcohol. I was depressed,” he said.

Like Jones, Pech found spending time with other vets helped him manage his PTSD and shake off depression. “We’re a family. We know what it is to be in a brotherhood, to have a purpose, to share the values we learned through our service,” Pech said.

Through Ruck for Veterans, Pech set up a physical fitness program in the South Bay. “Working out helps us overcome stress, anxiety, and depression. Helping each other restores the sense of purpose and brotherhood we experienced when we were in the service. After training with my brothers, I feel happiness.”

“We exclude no one. We’ve extended ourselves to homeless vets, and try to give them the sense of belonging they once had. If they can begin a more structured life that’s awesome, but we’re still going to support them no matter what.”

The advice he gives other vets, he said, is “Be kind. Live in the moment you’re in. Be present for the person who’s in front of you. Avoid negativity. It’s easy to get attached to negative drama. The harder road is to embrace the positive, to be loving, to laugh, to strive to bring something better to every place you’re in.”

“We’d love to have more community understanding and involvement. Join our marches. Give us a wave and a smile if you see us running along the beach.”

The next community-wide Ruck for Veterans March will be held Saturday, November 12, the day after Veteran’s Day, starting at 8:30 a.m. at Veterans Park, 309 The Esplanade, Redondo Beach. To join the march or for more information go to ruckforveterans.com.

The city of Redondo Beach, Elks Lodge #1378, and the Veterans Memorial Task Force will host a Veterans Day Tribute on Veteran’s Day, November 11, at 1 p.m. at the Veterans Memorial in Veterans Park, 309 Esplanade. A barbecue will follow at the Elks Lodge, 315 Esplanade. The barbecue is open to the public and free for veterans, members of the military, firefighters and police officers. A $5 donation is requested for all others. For more information, go to rbveteransmemorial.com.