SHE’S IN CHARGE: Women restaurateurs in Hermosa Beach are owning the game 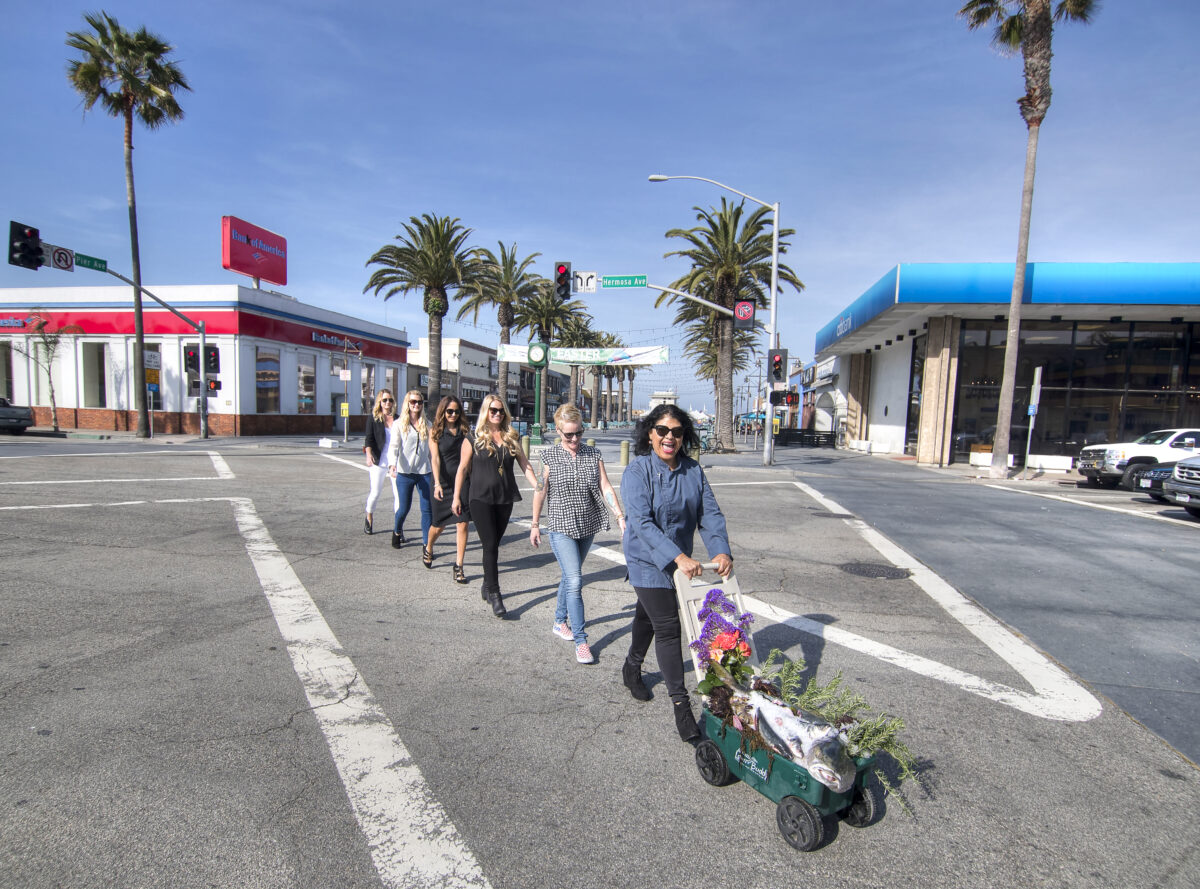 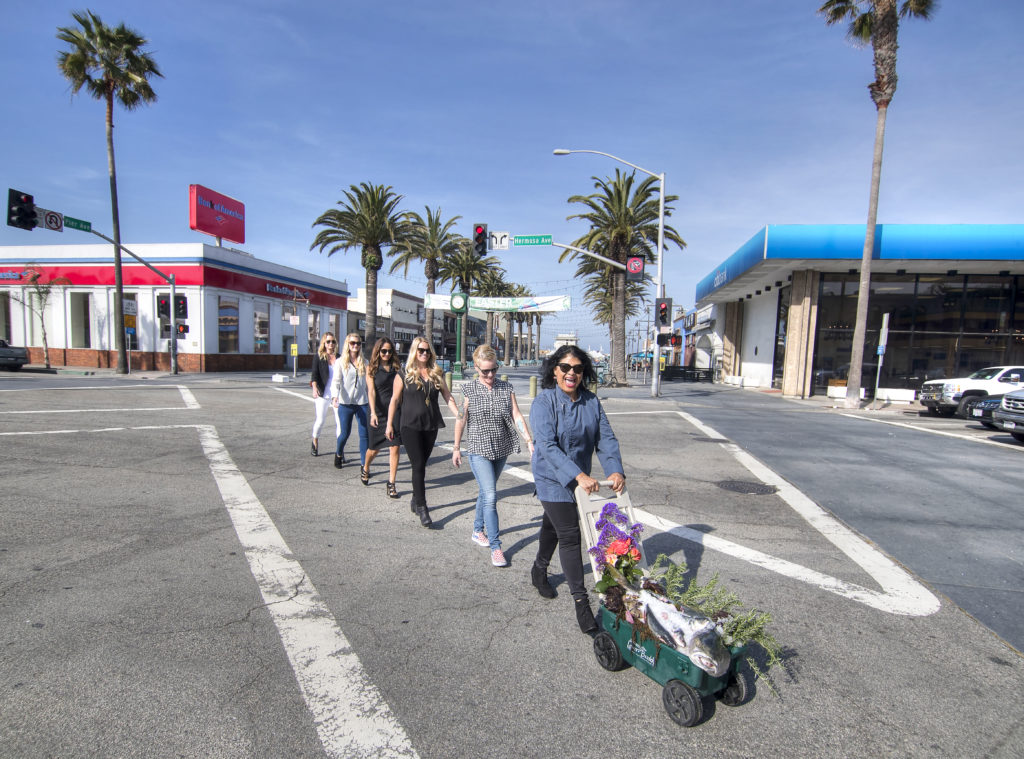 Many of us grew up watching our mothers or grandmothers ruling over the kitchen. Soiled aprons and the backs of their heads looming over steaming pots and pans as the rest of the family awaits the call, “Dinner is ready!” — it’s a tradition embedded across generations and cultures.

Yet this stereotype does not necessarily translate into the professional realm. The restaurant industry is dominated by male owners, buyers and chefs, while 72 percent of wait staff positions are held by women, according to statistics from the National Restaurant Association. The number of female-owned restaurants is on the rise nationwide, but a sizable gender gap in the higher ranks of the hospitality industry remains.

Against this backdrop, Hermosa Beach is rising up as a trailblazer. Over the last few years, the city has seen a growing prevalence of female restaurateurs, chefs and entrepreneurs, who are determinedly overthrowing the status quo. The reason is unclear — some credit the community’s relaxed and homey ethos while others suggest sheer coincidence — but the city has nevertheless become a breeding ground for female-owned restaurants, successful ones at that. We spoke with eight Hermosa Beach-based female restaurateurs, both seasoned and new, to shed light on their experiences as underdogs who are owning the game.

“Are you the owner’s wife?” 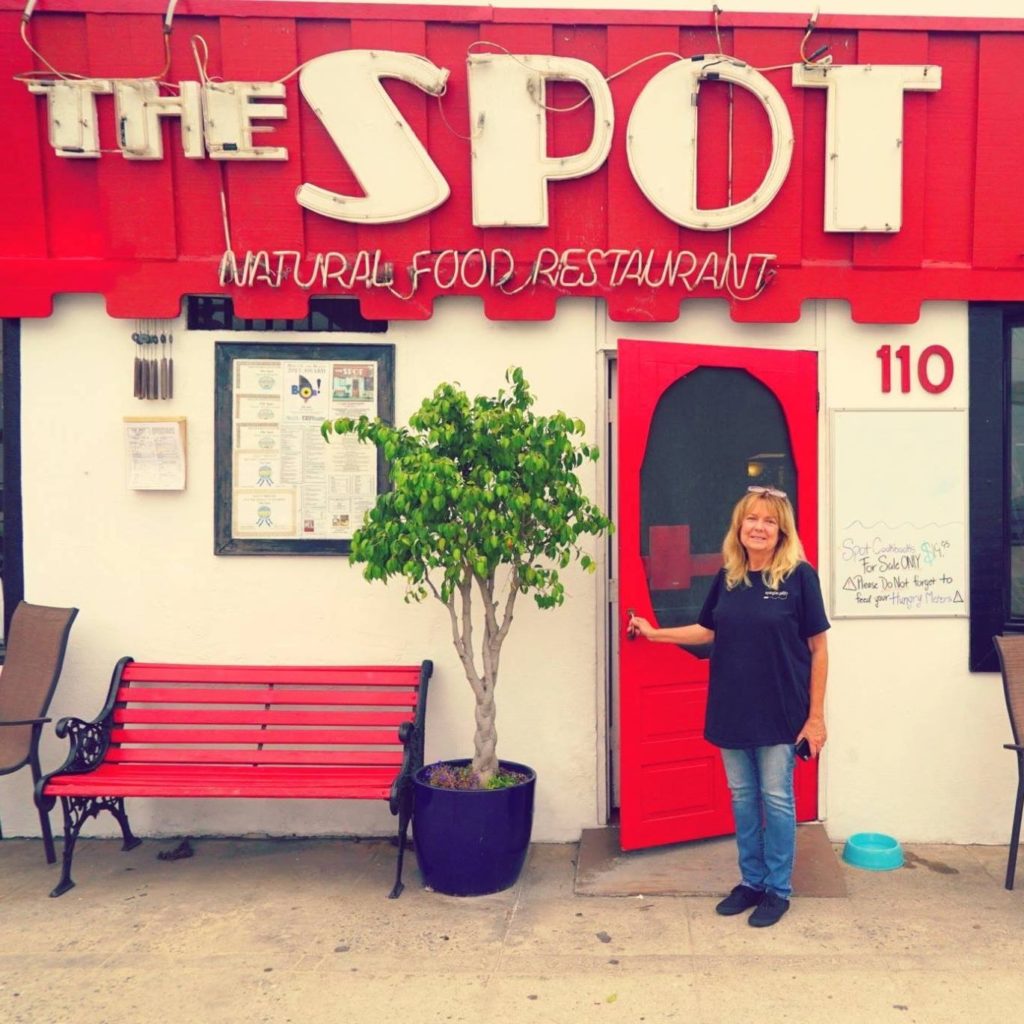 Tonya Beaudet, owner of The Spot. Photo by Anthony Hernandez

In 1981, Tonya Beaudet and her late husband Maurice noticed an unusual sign hanging on the door of their favorite restaurant, The Spot. “Here today, gone to Maui,” it read. The owner was looking to sell the iconic eatery. The young couple, in their mid-20s at the time, jumped at the opportunity.

“The next thing is, we buy it,” recalled Beaudet, an Arkansas native, now 62.

Cozy, quaint and tucked away on 2nd Street and Hermosa Avenue, The Spot is the longest existing vegetarian restaurant in LA County. When she and her husband separated in 1995, Beaudet became the sole owner. Her trademark veggie-burger — a blend of rice, tofu, nuts, pinto beans, Tamari, soy cheese and spices — is so highly regarded that it was featured on the Travel Channel a few years ago.

It’s been a challenging labor of love — from bookkeeping, budgeting and overseeing her staff of eight to working as the head chef. Yet, for many years, the rightful credit did not come her way, she said. Many assumed that a man was orchestrating the business behind the scenes.

“People would walk into the restaurant and ask, ‘Are you the owner’s wife?’” Beaudet said. “They never assumed that a woman would be the owner. I don’t hear that anymore.”

“I have a tone in my voice”

Next door to The Spot, Tammie’s Corner House Cafe has been up and running since 2008. For owner Tammie Los, a seasoned pastry chef who worked for years in hotels and restaurants in Santa Monica and San Francisco, her foray into running her own business began with baking exquisite muffins in her Redondo Beach home. After selling wholesale to local businesses for several years, she opened her first brick-and-mortar — a cafe in Torrance — when her daughter turned 7. Nearly 10 years later, with the vision of expanding her pastry and muffin heavy menu to include a full breakfast menu, she took over the nook that was once Le Petit Cafe.

Los, 54, credits much of the restaurant’s success to her now adult daughter, Shanie, who since a young age helped run the business, from flipping eggs to scrubbing the floors. When Los underwent a double mastectomy a few years ago, Shanie helped run the restaurant as owner and manager. Until then, Los said, she was working nearly 100 hours per week running her brunch joint. These years of experience have toughened both her and Shanie, dealing with both demeaning, oblivious customers to disrespectful staff members.

“I have a tone in my voice — I have this tone I’ve had for years,” Los said. “People tell me it sounds intimidating, and that’s because you have to be. You have to carry a stance and stand tall because the minute you don’t, it’s natural for men to want to be dominant.”

But those “rotten eggs” come through only once in awhile, she said. Los is proud of the tight-knit community of Hermosa Beach, from the many customers who poured in donations to help with her cancer-related medical bills, to the neighboring business owners like Tonya from The Spot, who always have her back and vice versa. She’s so familiar with her regulars that she feels like an “extra grandma” to their newborn babies.

“To me it’s not even a competition,” Los said of other local restaurants. “It’s a community. It’s all of us coming together as one. There’s plenty of restaurants and food for everyone. My customers probably go here and there like I do when I go out to eat.”

“Take the bull by the horns”

Melba Rodriguez, owner of Chef Melba’s Bistro on Hermosa Avenue, came to ownership after many years as a self-described “head honcho” in the corporate world, honing her skills as executive chef and operations manager at King’s Fish House and McCormick & Schmick’s. In 2005, the El Salvador native conceived her own restaurant, a dinner-only, farm-to-table eatery that serves fresh wild fish.

“It’s been a heck of an adventure,” she said.

Her approach is very hands-on, running the restaurant with her 10 staff members from behind the lines while remaining an effusive front-of-the-house presence.

Rodriguez said she feels empowered by the news that women restaurateurs are increasingly prevalent locally. She noted that when McCormick first hired her as an executive chef in 1990, she was the only woman among the staff of 26. She credits her success in the industry to her hardheadedness and perseverance.

“If you look at my street, there’s three women running businesses,” she said. “We’re very aggressive and direct when we negotiate. We know the numbers. Business logistics, we understand it more. We’re not afraid anymore to actually take the bull by the horns.”

Similarly, the Source Cafe’s Amber Caudle, who spent her formative years of classical culinary training in Colorado, Napa Valley, Italy and Spain, often found herself as the only woman in the culinary training program. For nearly a decade, Caudle worked as executive chef at Mediterraneo on Pier Plaza, until a hip surgery ended her career there.

Her determination to heal herself through food ignited a passion for health foods. She singlehandedly opened the Source Cafe at the Beach on Pier Avenue, specializing in paleo, vegan, raw, gluten-free, soy-free dishes that are organic and GMO-free. She and her baker/business partner Cindy Van Pelt run the restaurant together, overseeing a staff of 26 employees. For Caudle, there’s not a distinctive difference between running a restaurant with male partners or with a fellow woman. It feels the same, she said.

“There’s just so much handwork and passion that go in,” said Caudle, who is working on a cookbook. “It’s a tough business; you’ve got to love it.”

“It would be a different world”

Three out of the four owners at the neighboring Hook & Plow are women. In 2014, couple Brian and Bre Kelleher, formerly with Rok Sushi, as partner and bar manager respectively, teamed up with twin sisters Lauren Copelan and Lisa Cassity, who at the time were running Barnacles Tavern on Hermosa Avenue. The foursome conceived the farm-to-table, ocean-to-plate California cuisine joint from scratch. It’s been so successful that they recently opened a second business together — the Hooked Poke Market by the pier. All four take turns on the floor managing, bartending and serving, all the while raising their young children.

“I always say that women should be running our country,” Bre Kelleher said. “It would be a different world. We’re really good at multitasking, and we have a calmness about us. We’re good at delegating, being quick and fast. The restaurant being such a fast-paced business, that’s important. … All of us could pick up each other’s role if we needed to.”

New on the block

Just a few weeks ago, Pier Plaza welcomed the opening of Playa Hermosa Oysters & Fish, restaurateur Lisa Hemmat’s new venture. Hemmat, who has owned Lido di Manhattan for 13 years, said she and her partner Levi Lupercio jumped at the opportunity to take over the prime location and open a specialized seafood restaurant when Killer Shrimp moved out. They manage a team of some 35 employees. 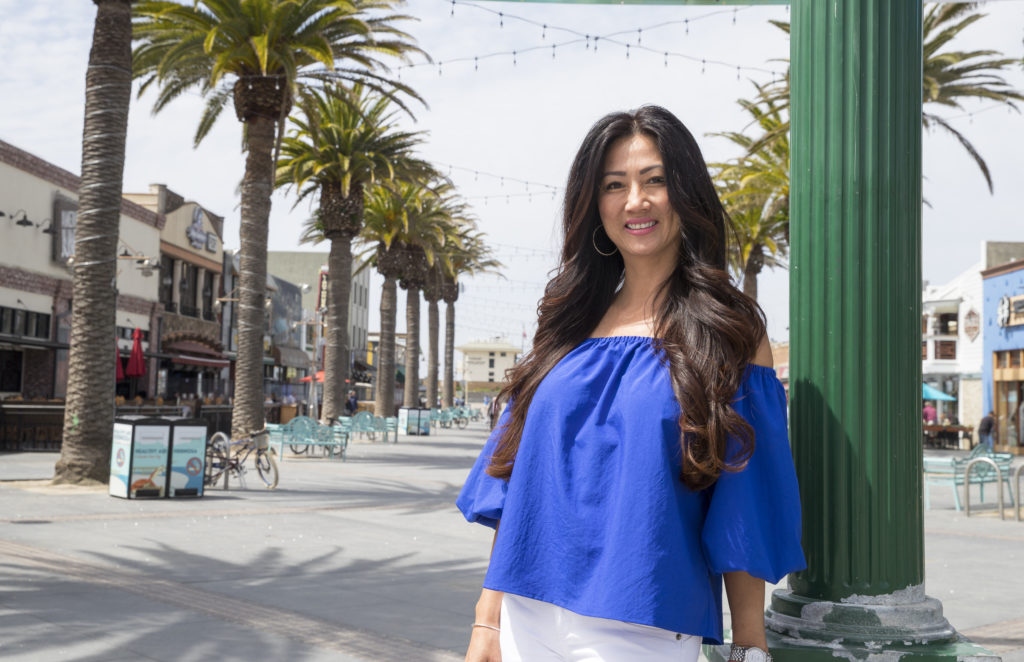 Hemmat, who was just 23 and fresh out of USC with a business entrepreneurship degree when she took over Lido di Manhattan, said she’s had to overcome stereotypes as a young restaurant owner. Many people assumed the restaurant was a hand-me-down from her parents, she said. But overall her experience as a female restaurateur has been positive, she said.

“To me it didn’t keep me down or anything,” Hemmat said of the male-dominated environment. “I like to inspire other women and enjoy working with other women. Some of my key people on my team are women … I don’t feel like I’ve been discriminated against. People are empowering. Customers and vendors love it.”

Two new women-owned restaurants will be opening up this summer: Decadence, an upscale, full-bar restaurant focusing on California cuisine with an Asian twist on Hermosa Avenue; and Sugar Dayne, a cookie studio on Pier Avenue.

Decadence’s Skylar Tourigny owned Marine Street Cafe in Manhattan Beach for nearly five years, until her lease expired recently. She said she explored some potential spots for the new restaurant in LA and Long Beach but saw a niche to fill in her Hermosa Beach neighborhood.

She said she knows very few female restaurateurs, likely because they’re busy on the floor working alongside their staff.

“I feel that these people are a little bit more humble,” Tourigny said. “A lot of times people didn’t know that I owned the restaurant because I’m out there serving. I like to serve a couple days a week and hang out with the locals. It started out because we were short-staffed but I realized it’s kind of fun.”

“I’m not the best server,” she added with a laugh. “I would’ve fired myself a long time ago. But the customers are nice about it.”

Hermosa native Katy Metoyer of Sugar Dayne is optimistic about her first brick-and-mortar business, where she plans to host cookie decorating classes, sell state-of-the-art cookies and cakes, and invite internationally acclaimed cookie designers to the studio. Sugar Dayne will occupy the space where Chef Lang’s was for several decades.

“My life has changed a lot,” said Metoyer, who recently was the keynote speaker at LA CookieCon. “I do everything around here. I help my husband with his company, run my kids to baseball. I’m excited, I love what I do. I’m not worried or overwhelmed. This is what I do every day.” B