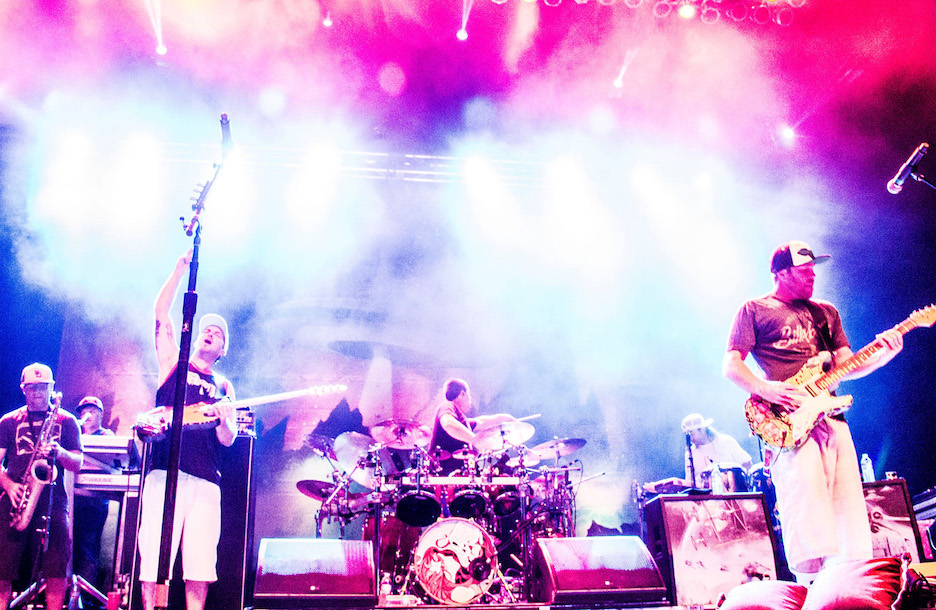 The first show that Slightly Stoopid ever played sent the band to the assistant principal’s office.

It was 1994 in the Ocean Beach neighborhood of San Diego, where the band’s founding members, duel frontmen and multi-instrumentalists Kyle McDonald and Miles Doughty, grew up. With a subversive punk rock set in the middle of their high school quad, Slightly Stoopid christened itself with a bang.

A quarter century later they are both fathers raising their children in the same surf town. McDonald has two twin boys, aged 8, and Doughty has three daughters. Punk rock is no longer their mainstay; reggae is, for now. In their usual uniform of a loose T-shirt, baggie shorts, dark surfer shades and trucker’s hats, Slightly Stoopid’s enduring appeal is a no-frills, no-bullshit, boy-next-door aesthetic that reflects their unpretentious approach to music.

Typically on the road (or in-flight) at least six months out of the year, Slightly Stoopid is groove-based emissary of love and light, traveling across the country and abroad to transmit ganja-fueled high vibrations. These past few months, Slightly Stoopid traveled to Hawaii and Mexico and did a three-day tour in Brazil, where, at one of the stops, they took audience requests for nearly three hours.

“It felt like it was only an hour,” McDonald says. “I’m down to play whatever the people request because they’re the ones that make the shows fun. We’d just be playing for ourselves if it wasn’t for them.”

“You can’t dream up that kind of stuff. I don’t know if I can dream that good,” McDonald says with a laugh. “It’s pretty humbling to hang out with some people you’ve looked up to all your life. They’re people just like you, everyday life, everyday people.”

This recent output is a laid-back reggae record that is stock full of emotive melodies and their signature sun-soaked harmonies. Beginning with a spacious instrumental track, the band’s affinity for strong horns (and ability to groovily arrange them) shines through. As evidenced by their storied output, Slightly Stoopid is never shy about defying expectations and breaking the mold. Whatever comes through, they honor; they hold the space for the melodies and ideas that are transmitted in that moment in time.

“Honestly, we don’t go into the studio and have any intentions of making a record one way or another,” McDonald says. “It’s like the title of the album; it comes to you and the music comes out with everyday life. We just go in and have a good time. We were blessed to be able to play with a bunch of musical legends on that record.”

Their musical journey began when McDonald and Doughty were just children, listening to Metallica and Guns N Roses and skateboarding by the ocean. The fiery guitar riffs caught their ears and pulled them in, and they had their own acoustic guitars by age 11. Since their 1996 debut album, Slightly $toopid — a youthful, thrashy punk record released on the late Sublime frontman Bradley Nowell’s label, Skunk Records — the band has widely expanded its repertoire, incorporating elements of ska, hip hop, blues, jazz and funk. McDonald cites everyone from Hank Williams III and Cat Stevens to NOFX and Anthrax as influences.

“It’s between growing bored or growing up and not wanting to do one thing,” he says. “If it’s good music, it’s good music. A lot of bands play one kind of style, but we’d be too bored to do that.”

This sense of openness is likely a key ingredient to their longevity. In their 25 years together, they’ve collaborated with a wide range of musicians, from Snoop Dogg and Barrington Levy to Grateful Dead’s Bob Weir. Their musical family is ever-growing, McDonald says, with honorary band members including reggae icon Don Carlos, Chali 2na, saxophonist Karl Denson (Lenny Kravitz, The Rolling Stones) and trumpet player Rashawn Ross (Dave Matthews Band).

“There’s not enough time in the day to do everything that you want,” he says. “You need a time stop button for you to do it all. I wanna play heavy metal, I wanna play jazz chords, I wanna play acoustic guitar. But we also like Minor Threat. It’s just a big melting pot of what kind of music we love.”

Slightly Stoopid’s upcoming set at BeachLife Festival will be a stripped-down acoustic set with light percussion, keys and horns, similar to their Mexico performance this past summer of their classic 2000 release Acoustic Roots: Live and Direct. But this time around, instead of playing songs just from the album, they’ll be drawing from their entire discography. McDonald says he’s looking forward to being back on the beach, bringing an organic feel-good energy to the festival.

“The best place you can play is on the beach,” McDonald says. “It’s always nice. You can’t really go wrong when you’re near the water.”

Slightly Stoopid will perform at the BeachLife Festival May 3. For more information on the band, visit slightlystoopid.com.