SOUND HEALING: A moment of peace and love descends upon Bruce’s Beach 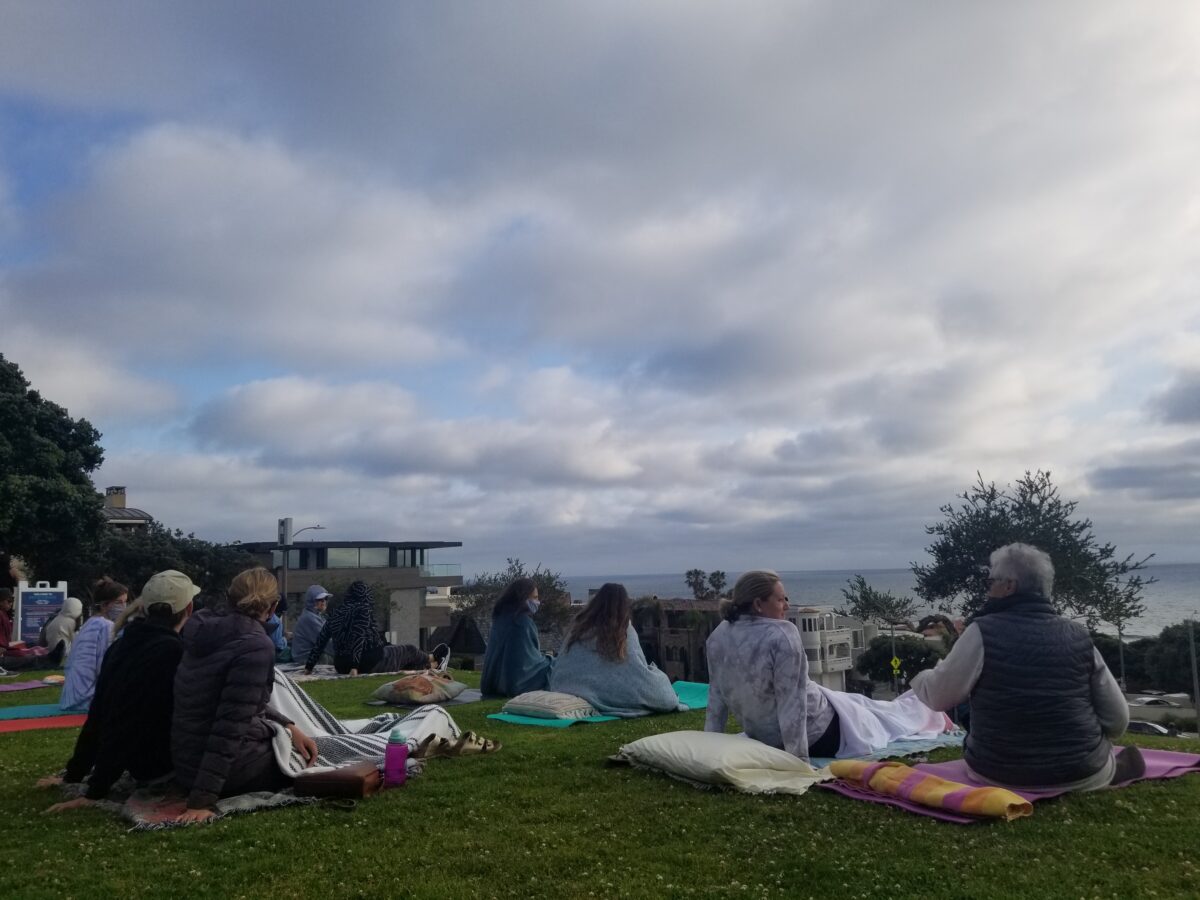 About 100 people gathered at Bruce’s Beach last Friday for a sound bath hosted by South Bay Culture Club. The event convened to ease tensions around the Bruce’s Beach site and foster peace, love, and connection in Manhattan Beach. Photo by DIGMB

About 100 people gathered at Bruce’s Beach last Friday for a sound bath hosted by South Bay Culture Club. The event convened to ease tensions around the Bruce’s Beach site and foster peace, love, and connection in Manhattan Beach. Photo by DIGMB

On a chilly evening last week, before the sun sank into the sea, about 100 people gathered on the grassy Manhattan Beach vista that has become a symbol in a nationwide racial reckoning. Bruce’s Beach, the park overlooking the Pacific Ocean, is now the subject of a bill before the State Senate that, if passed, will return the land to descendants of the Black couple who owned it before the city took it in a racist exercise of eminent domain nearly 100 years ago.

The site has become a point of contention in the city. Residents have written to local papers that they take “great offense” to discussions about restitution. Mayor Suzanne Hadley has described issuing an apology to the Bruces as the city giving out a club “to beat us with.”

But last Friday at sunset, the politics felt a world away. The crowd lay, eyes closed and prone, on yoga mats and pillows as three women played crystal “singing bowls,” which emanated waves of soothing sound. 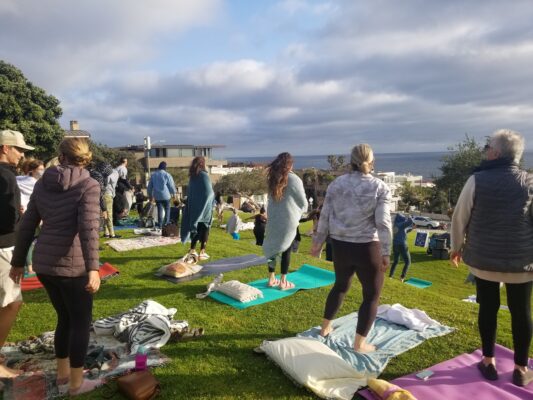 “We are going to get down into the traumas and replace the energy that is stuck,” said Jennifer Franklin of Bloom Holistic Healing. Around her were sunflowers, candles, and other women playing other meditative sounds: a gong that resounded gently, wind chimes, an ocean drum. Another woman walked through the crowd, waving smoldering sage and spritzing essential oils.

This kind of event is known as a sound bath and grounded in ancient tradition. Using sound to heal the body and spirit is a time-honored practice that began as early as 40,000 years ago with Aboriginal people in Australia. The ancient Egyptians, the Greeks, and Tibetan monks are examples of other ancient peoples who used the vibrations of sound to relieve the body of stress and anxiety. Clinical trials and white papers have since validated the connection between music and therapy. The sound bath at Bruce’s Beach was the brainchild of Manhattan Beach resident Allison Hales, who founded South Bay Culture Club, an organization seeking to connect people of various cultures through activities and events.

“It felt like the perfect way to reset the tone, to set a tone of peace and love and connection, with connection being the biggest part,” Hales said. “I felt like we had lost the connection, obviously because of Covid and being stuck in our homes, but also because of the heaviness and the division and what’s been happening at Bruce’s Beach. This wasn’t a protest, or a call to action, or anything other than peace, love, and connection and an attempt to get back to the Manhattan Beach that I remembered prior to all this.”

Hales, who had never attended a protest before the Black Lives Matter protest came to her doorstep last year, volunteered on the city’s Bruce’s Beach task force until she was asked to step down. She believes this was because she was assertive. As a Black woman, she was deeply unsettled by opposition within the city to making a simple apology for what happened 100 years ago.

“I don’t know what the outcry was about,” Hales said. “That’s the part which makes me feel there is a divide. I feel that’s where there’s a communication breakdown, an empathy breakdown, a compassion breakdown. And I just thought, we can break down barriers by all appreciating our one common goal, which is to achieve peace, love, and connection.”

On Friday evening, after an hour of sound-supported meditation, Franklin asked everyone to repeat after her: “I am divinely guided and protected at all times. Everything is working out for my highest good. I am loved. I am whole.”

If we don’t care for ourselves, she explained, we will continue to operate out of stress and anxiety, rather than love, peace, forgiveness, compassion, and understanding.

“Everybody’s not racist in Manhattan Beach,” she said. “That’s not the case. It’s just a lack of understanding — that’s all it is.” After the sound bath, attendees of various skin tones turned toward one another and embraced.

“Hi!” they greeted each other. “What’s your name?”

“I see diversity and inclusion in this crowd, which is such a beautiful thing,” Franklin said. “We are all human. … We’ve been through a lot this year. This is the time to rebuild.” ER 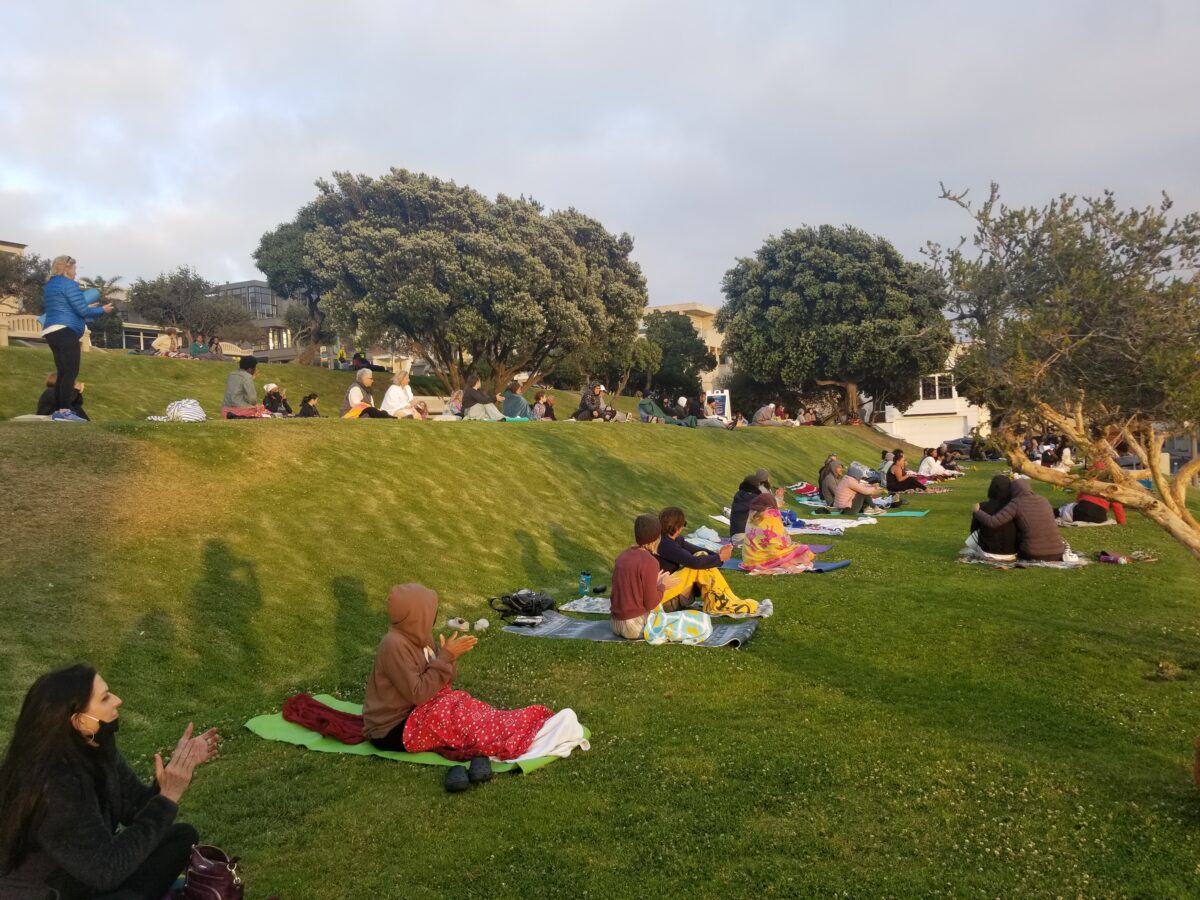 The sound bath organized by South Bay Culture Club was designed to foster peace, love, and connection, according to its organizer. Photo by Rachel Reeves