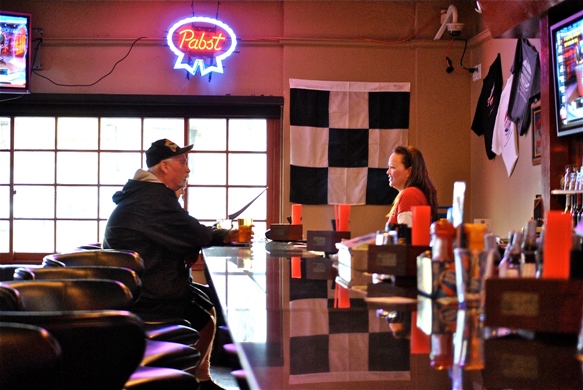 Car culture in America has spawned some symbols that are inexplicable to people who regard vehicles unsentimentally. None is more confusing than the roadhouse or restaurant that is decorated like an old garage, complete with tools and parts. Garages are dirty, noisy workplaces – why would anybody find that environment alluring? Those who spent quality time with grease under their fingernails may find it hard to explain that this was the place where they gained confidence at demanding tasks and found camaraderie with others who had done the same thing. 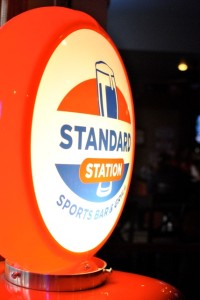 El Segundo has a tavern called Standard Station that subtly evokes the allure of historical motoring in a different way – it is decorated with memorabilia from 1950s gas stations, complete with a gumball-dispensing gas pump. They don’t go overboard with it, festooning the place with oilcans and rusty wrenches, but the theme is expressed with subtlety and humor.

All of which would be a good story about interior design except that an acquaintance told me that the place was owned by a local family and the food was unusually good for a bar. I appreciate a good tavern meal as much as anyone, so I decided a visit was in order.

Standard Station is a sports bar, so the flashing TVs distracted us from the décor at first, but we appreciated the coveralls decorating one wall and other oddities. I was of course most interested in the menu, which was mostly the usual (I was going to say standard items, but given the name of the place, that was open to misinterpretation). We decided to start with a mix of fried mushrooms and zucchini, a blackened chicken salad, and onion rings. And, of course wine and beer, because we were, after all, in a bar. While we waited for our food we mused about El Segundo’s plethora of old-fashioned bars – there are at least five in a very narrow radius serving substantially the same food, varying only in how well they execute it, while further down Main Street sushi places and wine bars cater to a newer crowd. We decided the south end of town is a cultural artifact of El Segundo’s blue collar past, the north its white collar present.

The zucchini and mushrooms arrived at about the same time as the salad, which was fortunate since I burned my mouth on the former and cooled it with the latter. The beer batter on the mushrooms was crisp, the interior filled with boiling hot mushroomy goodness – you could tell that they were freshly made and rushed to the table. They were dusted with Parmesan and served with chipotle aioli and ranch dressing, all nice touches.

The salad was unusually good for tavern food too, a good mix of greens topped with chicken encircled by avocado and tomato slices. Though the chicken was described as blackened, the spicing was very mild – I would have preferred a bit more kick, though my companions liked it just as it was. I stand by my opinion, since spicy chicken and cool ranch dressing is always a knockout combination.

The only starter that was sub-par was the onion rings, which were in a soft, flavorless batter that was different from the beer batter on the zucchini and mushrooms. I asked if these had been brought in frozen and our server confirmed that they were. It was an odd decision, since the kitchen certainly has fresh batter and fresh onions.

For dinner we selected fish and chips, a pulled pork sandwich, and a pair of burgers, one with poblano chile and the other with conventional toppings of bacon and cheese. The burgers were merely average – not bad but not noteworthy. The best thing about them was the side dishes: your choice of house-made potato chips, French fries or sweet potato fries. The pulled pork was a high point of the meal, the tender, flavorful meat simmered in just the right amount of a medium-spicy sauce that had just enough kick to be interesting, with a classic coleslaw to cool it. I’ve had some pulled pork sandwiches locally that were so soppy the bread fell apart, but this one held together just fine.

The fish and chips were house-made in the same batter that was used for the mushroom and zucchini starter, and it was well-executed, crisp and almost greaseless without being over-fried. I wouldn’t order both the fish and chips and the fried vegetables again since it was a bit much in the fried foods category, but the fish and the salad would have been a fine combination.

As you might expect, prices are modest – few items are over ten dollars, so our bill for four with libations was under a hundred bucks. The service was not particularly fast but was friendly, as befits a place where you go to unwind. Standard Station is modest and unpretentious, and it’s fun – and don’t we all need to go to a place like that once in a while?