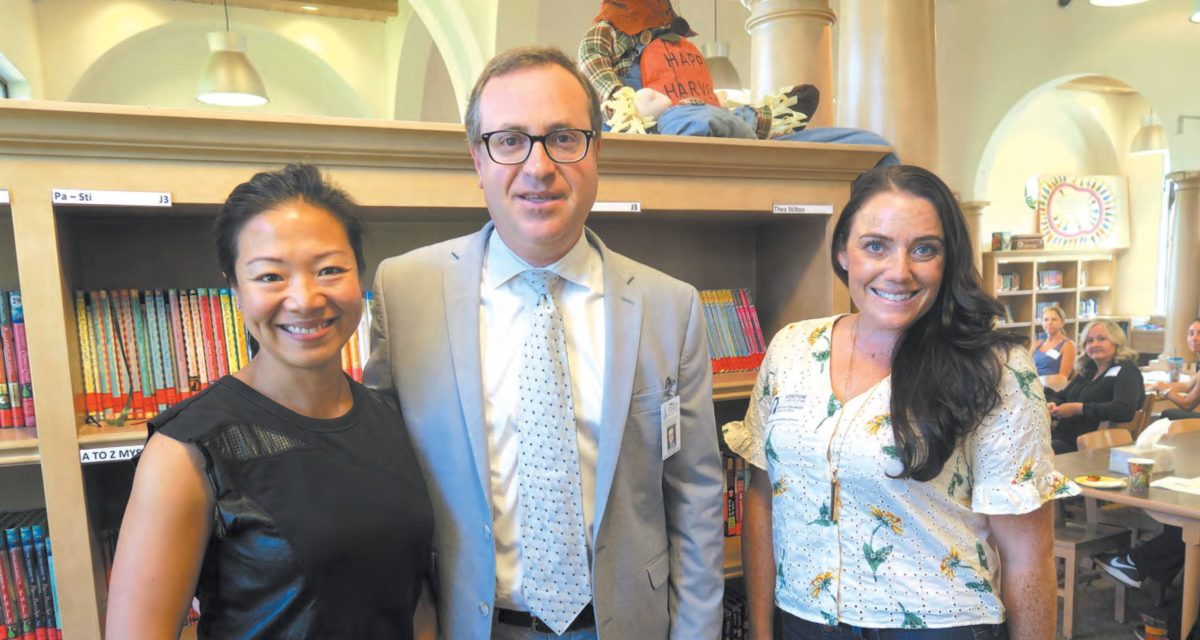 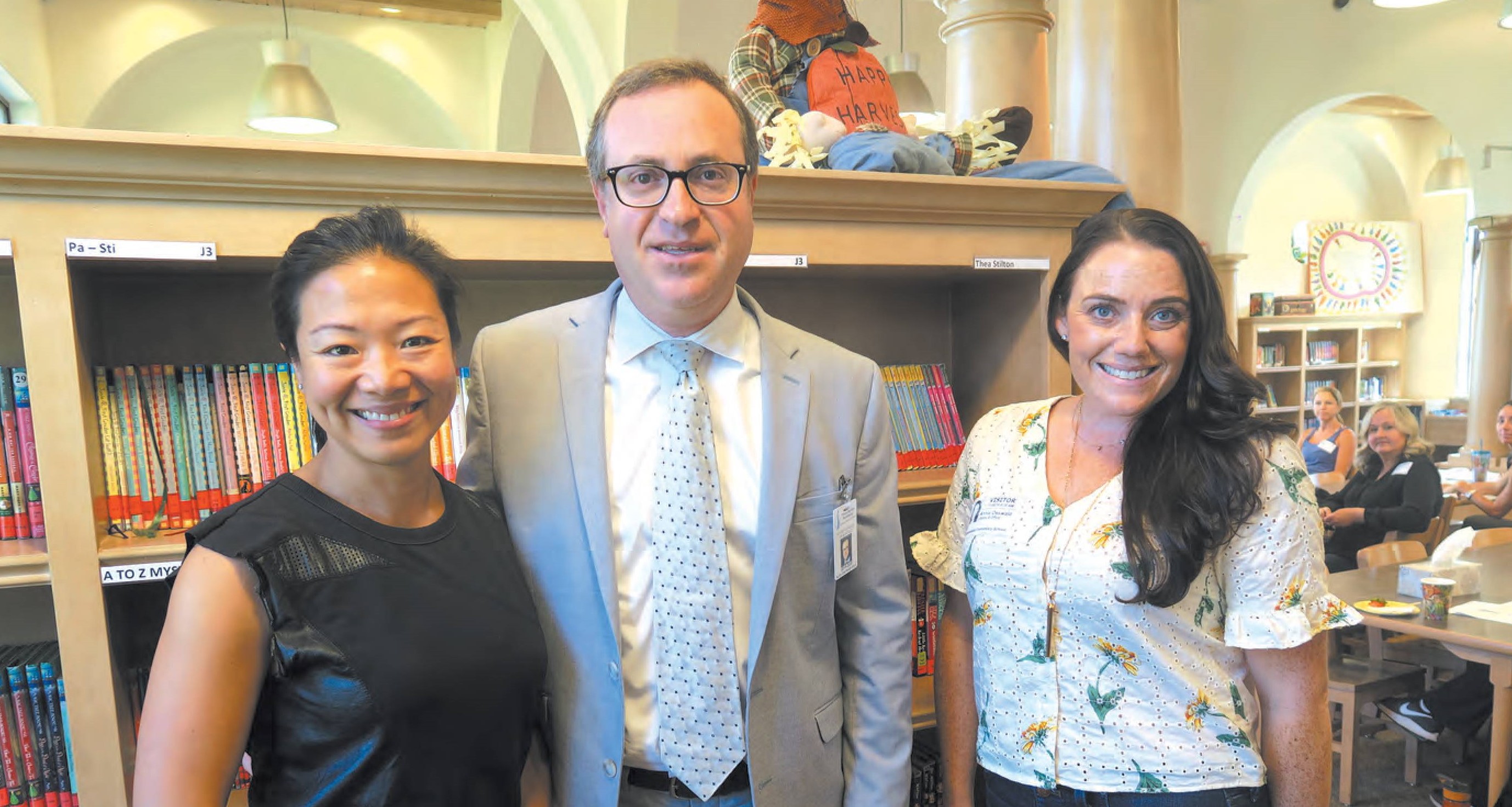 Thirty-five National Merit semifinalists, a top academic decathlon team and award-winning yearbook and journalism programs are a few of the successes that Palos Verdes Peninsula Unified School District Superintendent Dr. Alex Cherniss highlighted at the inaugural State of the District presentation on October 2.

“The state of the district is clearly strong. The present is exciting. The future is even more exciting,” Cherniss said.

The former history teacher told over 350 parents, students, staff and community leaders about a sixth grader named Claire. Her research report on ancient Greece consisted of two sentences: “Socrates was a wise man. He was a Greek philosopher who walked around giving advice to people, then they poisoned him.”

“So hopefully you’re kinder to me tonight than that,” Cherniss said.

By most measures, PVPUSD’s 17,400 students are high performing. Niche.com named PVPUSD the top district in the South Bay and seventh in the state. Its 2020 Best School Districts in California list is based on academics, teachers, health and safety, and diversity.

“However, we do have long term fiscal challenges, increasing pension costs and failing infrastructure. These are challenges we’re going to have to address,” Cherniss said.

At the State of the District at the Harlyne Norris Pavilion in Rolling Hills Estates and in an interview at his Palos Verdes Estates office, Cherniss spoke on district challenges, successes and priorities.

PVPUSD Board of Education President Linda Reid concurred. She said a major district priority is “getting our facilities up to a baseline level of decency.”

Cherniss noted that money spent repairing buildings are diverted from student programs. At the October 10 Board of Education meeting in Palos Verdes Estates, Cherniss said PVPUSD facilities are inferior to neighboring districts.

The Facilities Advisory Committee, which has been investigating school site conditions presented a list of facility projects totaling $425 million. The projects were divided into 1. Bare bones ($314 million) for critical repairs, code upgrades, safety, security or performance issues. 2.Should haves ($77 million) to preserve physical assets and make minor improvements. And 3. Nice to haves ($34 million) for degraded facilities, overused playgrounds, and traffic.

The board voted unanimously to direct district staff to engage bond counsel and hire a financial advisor with the goal of pursuing a bond. The amount of the bond is still under discussion.

In 2016, PVPUSD’s bond tax rate was the third lowest in Los Angeles County, according to the underwriting firm Piper Jaffray. The State of California provides an average of $9,400 annually per student to the district. The PTA and Peninsula Education Foundation donations and parcel tax contribute  an additional $1,300 per student. Nationwide, California is forty-first in state funding per student.

One statistic that may surprise many is that 25 percent of PVPUSD students score below grade level standards in math and English. According to the 2018 California Assessment of Students Performance and Progress (CASPP), PVPUSD ranked 13th in the state, behind Manhattan Beach, La Canada, and other top districts. In the PVPUSD, 22.8 percent of the students did not achieve grade level competency in English, 28.3 percent did not in math. At the top ranked San Marino Unified School District, 13 percent of students did not meet standards in both subject areas.

Reid acknowledged that district CASPP numbers are low, but she added that many district high school students who take the test have made it clear that “this is a test they don’t care about.”

Cherniss was superintendent of the 3,400-student San Marino district for over four years before he joined PVPUSD.

To improve academic achievement, the district has increased teacher training and hired intervention specialists. It is expanding intervention programs during normal school hours at middle and high schools because many of those students participate in after school activities. Reid said the board is looking into reconfiguring the middle school schedule to add another class period for remedial instruction.

Safety is a top concern for the district and parents alike. Palos Verdes High School was locked down after an anonymous phone threat last May. As a result, the district recently implemented a call identification system. PVPUSD also offers student tip lines, high school resource officers, uniformed employees and a new visitor management system. “Safety and security is an absolute priority. It’s a priority of our Board of Education; it’s a priority of our staff,” Cherniss said.

The American Psychological Association defines connectiveness as “the belief held by students that adults and peers in the school care about their learning as well as about them as individuals.” The APA found, “Students who feel connected to their school are also more likely to have better academic achievement, including higher grades and test scores, have better school attendance and stay in school longer.”

Cherniss believes that programs like Art at Your Fingertips, music, journalism and drama are avenues that help students feel connected. “Every day, it should be our goal to connect kids to something or someone positive at school that makes them feel inspired and makes them feel cared for,” said Cherniss. “It makes them feel like they have a purpose.”

Former PEF President Roma Mistry believes the district goal of connecting students is important. “For both of my kids, finding their ‘thing’ and/or that one teacher who has encouraged them has contributed greatly to their success in school,” Mistry said.

Supporting students with mental health issues is another district priority. Dr. Trista Ramirez, the PVPUSD coordinator of student mental health and support, said, “Anyone who watches the news or reads the paper has seen an increase in public awareness about mental health concerns in teens, particularly related to stress, anxiety, depression, and self-harm. In my time in our district, I have seen this same increase in our community.”

A former PVIS principal and PVHS counselor, Ramirez added, “All the elementary and intermediate schools have implemented social-emotional curriculum at all grades to equip our students with the skills to develop positive relationships, regulate their emotions, set appropriate goals and make good decisions.” The district has hired counselors for intermediate and high schools to help students going through a crisis and provide ongoing support. PVPUSD is one of the few Southern California districts with licensed therapists.

“Our kids need mental health education,” Cherniss said. “They need drugs and alcohol education, they need sex education, they need cultural sensitivity and they need healthy coping skills. All of this needs to be part of a curriculum.” Like many districts, a required high school health class was eliminated years ago. The district is developing a student seminar course in health that will be a graduation requirement.

At a recent Montemalaga Elementary School PTA meeting, Cherniss said that the district hopes to help children who have moved out of the district boundaries because of their parents’ divorce continue their education at PVPUSD.

The district has also implemented and expanded programs to improve STEM education, cyber safety and help students prepare for careers of the future. “We want them to be successful in college and beyond,” Cherniss said.

Cherniss is especially excited about the new PVPUSD Marine Science Center where “Students can have an integrated instruction with professionals and Ph.D. researchers. It’s a tremendous opportunity to study ocean sustainability here on the Peninsula.”

During his first year as PVPUSD superintendent, Cherniss made cuts, turning a district budget deficit into a surplus.

“My hope is to be here a long time,” Cherniss said.

Asked what would be a sign that his second year at PVPUSD was a success, Cherniss replied: “I think just the excitement and the interest in our district. I think a great accomplishment was just last night (the State of the District), seeing so many people who are being engaged and reengaged at our schools.”

As parent, Roma Mistry said, “The district is the backbone of the community and is one of the main reasons Palos Verdes is a great place to live.”