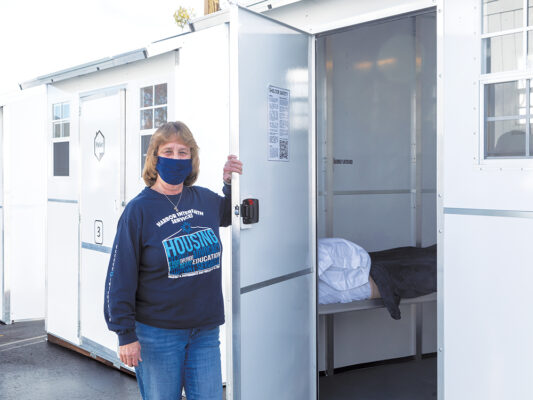 The Pallet Project at South Bay Galleria was a recent effort to help the homeless with temporary affordable housing. Shari Weaver of Harbor Interfaith works out of an office at the site in this picture. Photo by JP Cordero

Redondo Beach’s plan for 1,140 new affordable housing units mandated by the state was rejected last week by the State Department of Housing and Community Development.

In a letter to City Manager Mike Witzansky, the state contended Redondo’s plan for 700 units on a 15-acre triangle along Marine Drive and Inglewood Avenue, northeast of I-405, is unfeasible.

“It’s a surprise and not a surprise,” said City councilman Todd Loewenstein.

The largely undeveloped property now has a Vons market and an In-N-Out Burger. The state surmised that the landowner will build market-price housing, rather than affordable housing on the property.

At its Jan. 11 meeting, the  council voted 3-2 to evaluate other potential sites, including the parking lot across from South Bay Galleria, near Nordstrom Rack, Panera Bread and Living Spaces. The state has approved 640 units already planned for that property.

Approximately a half-dozen sites are on the list for consideration. Most are along Maryann Drive and 190th Street,  and average less than an acre each.

“We’ll need to prove Maryann Drive and (the Marine and Inglewood avenues triangle) are feasible or it’s 1,440 units at the Galleria,” said Councilmember Laura Emdee. She and Councilmember Christian Horvath voted against the motion to look at the other sites.

“I don’t think any of the other sites my colleagues voted to reconsider will help us with AFFHS (Affirmatively Furthering Fair Housing),” Emdee said, referring to the state program under the Department of Housing and Community Development.

Emdee and Horath have contended that the plan supported by the council majority does not distribute the proposed affordable housing fairly across the city’s five council districts.

Redondo has until Feb. 11 to submit a new plan.

Public hearings on the issue are scheduled for Feb. 1 and Feb. 8.

The state requires the city to rezone the city before 2029 to accommodate 2,400 additional housing units — across income categories.

The city is required to have a State approved housing element by October 2022. ER