Super Bowl Pool: What Are Good Numbers to Have in a Football Pool?

If you’ve ever been to a Super Bowl Party, chances are you must have seen a 10×10 betting sheet. If you are unfamiliar with the world of betting, you must have wondered what that is. 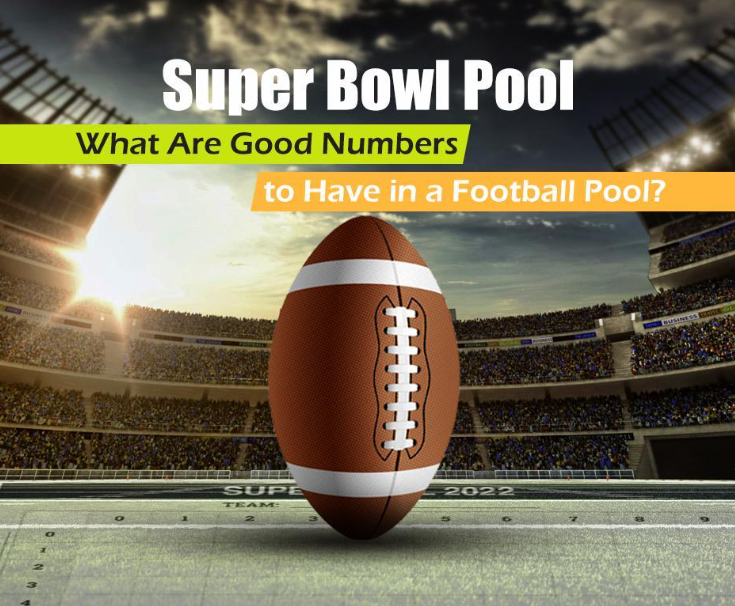 It’s called a pool, and it uses a simple charting that doesn’t require any previous knowledge. Anyone can learn it and start betting on the spread in a typical football game. But if you’re unfamiliar with sports betting, it’s understandable if you don’t know where to start. To help get you familiar with betting, you can check Lines.com for more information.

How Do SuperBowl Squares and Football Game Pools Work?

The pool/party host creates a 10×10 square chart numbered 0-9 across each axis. Each axis may be labeled by the team members playing or home/away.

The buy-in can be anywhere from five dollars to a hundred dollars for each square. It all depends on the clientele purchasing the super bowl squares. After the betters have purchased all squares, the host will then assign each box randomly in order to give everyone an equal and fair chance of winning and securing a coveted position across the pool.

Members can buy any number of squares that their heart desires. The more squares you buy, the larger payout you stand to receive.

What Is the Best Number to Have in a Football Pool?

Ideally, it’s good to have the 0-0 square early on. However, the chances of winning any particular slot continue to change as the game progresses. Around 20% of all first quarters wind up winning the 0-0 box. 20.9% wind-up with either 0-7 or 7-0. And, around 16.4% secure 0-3 or 3-0. If you wind up with these values, your chance of winning will get worse with every quarter.

Ideally, 0, 3, 4, and 7 are seen as the best values. However, variances do occur as the game progresses.

At halftime, 7 remains the luckiest number while number 4 carries the highest odds of winning by the end of the 3rd quarter. Number 4,0 has the best chance of winning a couple of prizes. A 3-0 box carries a higher probability of the final playoffs for winning a grand prize.

What Are the Worst Numbers to Have in a Football Pool?

Numbers 9, 8, 2, and 5 continue to remain the worst numbers to score in a football pool. However, they are not as bad as they used to be earlier. Today, zero edges out of 7 as the best.

What Are the Rules for Squares?

The game must have an organizer to collect the wagers and manage the game. As far as rules are concerned, they are pretty straightforward. With each quarter ending, players with match the last digits of the team’s score win. A similar set of rules applies to the final scores as well.

While the basic version of the football pool remains the most popular one, many offer myriad additional opportunities to win as well.

The first one is called ‘touching squares.’ In this strategy, the cells adjacent to winning squares (both horizontal and vertical) also win something. As per this rule, T stands for Touching, and W stands for Winner.

A touching square is when you have at least one of the two winning numbers. The winning square for a quarter is often worth much less than the actual prize money. However, it may be enough to cover your entry fee.

The winning numbers of each participant are affected by bigger dollar pools. While making things interesting, it also keeps one person from winning multiple wins during a quarter that is scoreless.

The payout for Final and Halftime winners is generally higher than 2nd and 4th Quarters. Finals always carry the biggest prize.

Another way to win is through the ‘Reverse’ rule. Under this, the person with square numbers corresponding to the opposite of the winning score wins. For instance, if the final score for Team A was 24, and 20 for Team B, then the grand prize would be Team B:$ and Team A:0.

Whatever the final score at the end of halftime, 1st quarter, 3rd quarter, and finals will be given to the person owning the corresponding square. For example, if the score is 17-10 at halftime, the person holding 7 and 0 squares would win that part of the game.

Winners get one-fifth of the total winning sum. The Final Score doubles it to ⅖. So, if you bought a five-dollar square in a 100 square pool, the total money to be paid would be $500.

It does win the final score with these figures in mind; you would receive a winning amount of $200 and a hundred dollars for all other winning scores.

Learning football pools and super bowl squares is straightforward, simple, and easy. You just need a bit of practice. After a couple of initial trials, you will get the hang of it.