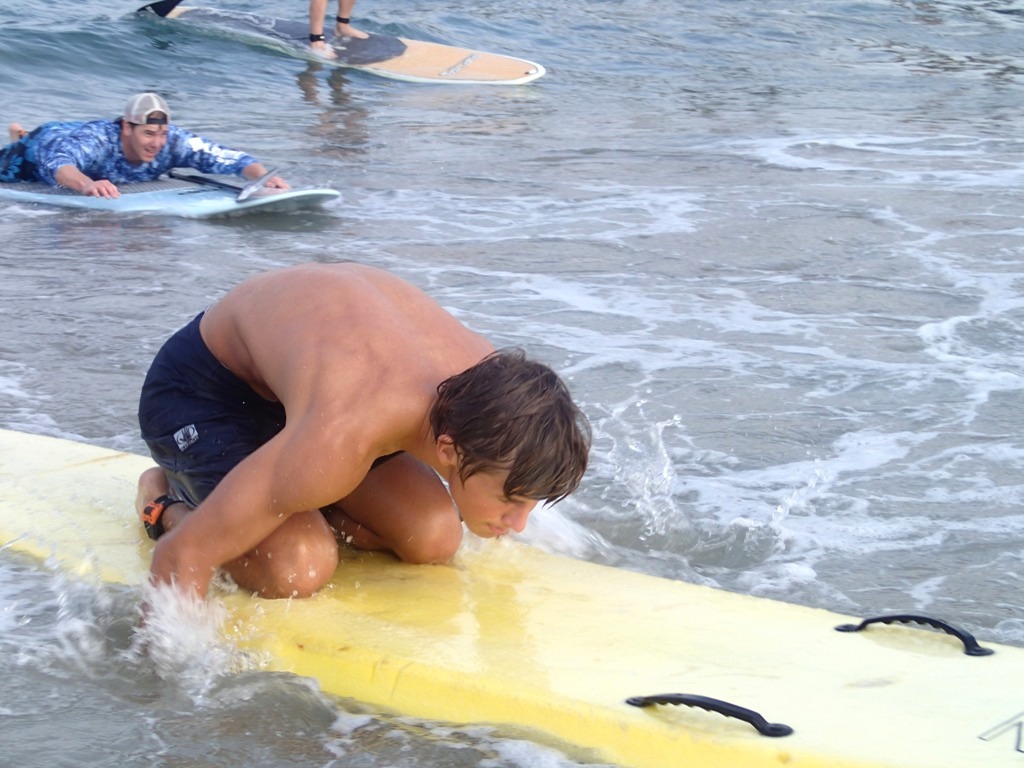 A young paddler sprints to the finish aboard a soft top paddleboard during the Velzy Stevens Paddleboard Championships.

A rainbow of paddle boards, ranging from waterlogged soft tops to carbon fiber stand-ups, lined up off the end of the Manhattan Beach Pier Sunday morning, August 6, for the Velzy-Stevens Paddleboard Championships. The 1.6 mile race to the Hermosa Beach pier (a sprint by paddleboarding standards) has been a beach family tradition since 1962. The race is named after legendary surfboard builder Dale Velzy and popular local surfer Terry Stevens.

Nearly half of the competitors raced with family members, sometimes on the same board. Among the family teams were Bill Caras, daughter Katie and son Collin; lifeguard Heidi Nelson and sons Kai and Kailani; Brett Manuel and sons Kaelen and Tristan; Mitchell Miller and sons Roman and Ryan; and Caleb Kerekes, son Jake and daughter Madeline.

Tiffany Tudyk, 32, was the first woman to cross the finish line with a time of 20:02. Kobe Sallstrom, 27, of Hermosa, was the top prone paddleboard finisher, in 18:20. Sydney Brouwer was the first female prone paddler to finish, in 23:28.

“The conditions were great today, the water was fantastic,” said the father of Michaela Webb, 14, winner of the female 14 to 17 soft top division. In a testament to the beach-side way of life, many of the paddlers, among them Webb, insisted they did no training for the race. But in Webb’s case, it wasn’t entirely true.

“She does Junior Guards,” her father disclosed.

“We don’t have a goal time this year, since it is our first time,” said one mom of the two-person approach.

“Maybe next year when I am more experienced,” the daughter added.

Members of the South Bay Boardriders Club, which runs the race, shagged boards at the finish to prevent collisions.

Young paddlers stumbled out of the water, and ran up the beach into their parents’ arms, grit fading into smiles. At the awards ceremony, everyone gathered in a circle to hear the winners’ names announced while SBBC’s Bobby McKeegan strummed his ukulele.