Obamacare and the King Harbor Mall

Fox News viewers recognize Frank Luntz as a frequent commentator around election time. He has made something of an art form out of framing. No, he doesn’t wear a tool belt and double park his truck in front of your house, not that kind of framing. Luntz has become famous for framing words. People like […]

Harbor Lights: the world after Measure A

Measure A has come and gone. The real decision on zoning the AES property, lies somewhere out in the future. The property is zoned for a power plant or a park. No one who understands the reality of the situation believes it will remain that way. The no power plant leaders will probably begin telling […] 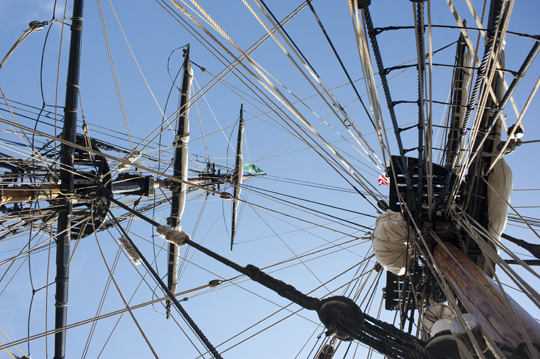 The tall ship Lady Washington, arrived in King Harbor for a 7 day visit on Wednesday. The original Lady Washington was the first American ship to land on the west coast, in 1788. The ship moored at Redondo Beach Marina was launched nearly two centuries later as part of the Washington State centennial celebration. The […]

Enemies of the people

Suppose the time came to pay for a restaurant meal and you asked a waiter the amount of your bill. How would you react if the waiter pointed to you, the best dressed member of your party, and said $313, then switched focus to your associate dressed in jeans and a tee shirt and said it was only $70 if she paid? How could the same meal cost almost five times as much for you just because you appear to have more money?

Harbor Lights on Measure G: the Politics of Fear

Nothing beats good old fashioned terror when you want to force people to swallow your political agenda. Remember “weapons of mass destruction” and “We’re fighting them there, so we don’t have to fight them here?” Redondo Beach voters have been treated to the same tactics this election season courtesy of the No on Measure G […]

Heart of the City needs resuscitation

AES sponsored a series of movies in Seaside Lagoon this summer. Tony Chavez AES Redondo Beach plant manager said, “AES Redondo Beach is excited to offer the community an opportunity to spend a wonderful evening enjoying the beautiful downtown Redondo Beach area.” If only it were true. Not the part about the movies, they ran […]

Crustaceans meet cowboys at Redondo Lobster Fest Sadly, a living creature has to lose its life to become part of the human diet. In the old days, dad or grandpa dispensed a barnyard animal to the afterlife out behind the barn with a knife to the throat or a quick “two to the head”. Today […]

If you don’t have kids, grandkids, neighbor kids or you aren’t a kid yourself, “Wii” may sound like an unfinished word from some foreign language. Everyone else knows it’s the name of an extremely popular and somewhat revolutionary video gaming system. About 200 of the best players in the U. S. will gather in the […]

Harbor Lights-Food for thought, and Fish

The bacteria colony south of the Redondo pier that blooms on rainy days appears to result from something more than the standard urban street runoff. Los Angeles County measures TMDL (Total Maximum Daily Load of bacteria) in the vicinity of piers because they attract two of the largest generators of water-borne bacteria, humans and animals. […]

Harbor Lights: The Battle of Mole B

by Harry Munns When you build a harbor out from a beach the way King Harbor was built, you need a way to get out to the furthest parts of the body of water you created by enclosing what used to be beach. The way it was done in King Harbor was to build concrete […]

Burial at sea has become an appealing alternative to the traditional funeral and cemetery interment. But people outside the world of morticians and mortuaries may not realize the process of cremation and scattering of ashes on the ocean isn’t technically a burial at sea. “Those are very rare and very expensive. You have to have […]

Richard Lawrence works for Brutoco Engineering and Construction, Inc. as a project superintendent. His company recently completed a project about one-third of a mile off the King Harbor breakwater. West Basin Municipal Water District (WBMWD), the company that hired Brutoco, has spent a bundle on improvements at the Redondo SEALab, including construction of a new […]

Getting together to celebrate the fourth

Legendary restaurateur Pete Moffet has organized the Manhattan Beach Winter Holiday Fireworks Show for 22 years. This will be the fourth year he has operated the July 4th extravaganza at Seaside Lagoon. Pete fought hard to open the lagoon for swimming on the Fourth, and after two years of teasing people who paid to enter […]

Redondo councilman Pat Aust swears he isn’t saying, “I told you so,” when he reminds his fellow councilmen he voted against Seaside Ice, but he could if he wanted to. Back in 2008 when the city began considering a proposal to operate a holiday-season ice skating rink at Seaside Lagoon, Aust didn’t believe it was in the city’s best interest.

Title 2. Chapter 9. Article 7. of the Redondo Beach city charter has a simple title, Harbor Commission (HC). The commission was created by Ordinance No. 2327 adopted on March 15, 1982.
As is the case with all city commissions, the mayor appoints citizens to serve. Membership qualifications are more specific than the commission’s tasks. The municipal code defines 15 specific criteria for serving on the HC, including a number of professional qualifications such as an attorney, a civil engineer and a real estate broker.