Tom Redfield Jr. was drinking a cup of coffee at 5:30 in the morning on Dec. 10 waiting for some plumbers to arrive at his home near Portuguese Bend when his dogs started to bark. Redfield looked outside and saw police in his backyard and heard helicopters flying overhead.

Turns out there was a 27-foot open-hulled panga boat filled with two dozen illegal immigrants that landed on the beach just below Redfield’s home. 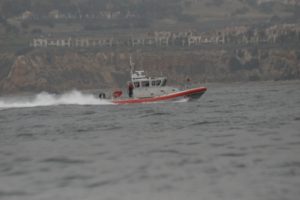 “They beached the boat and they all ran up the hills,” Redfield said. “We live in a fairly rural area so it’s a natural place for people to be able to scatter. There’s a million places to hide.”

This wasn’t the first time. The landing marked the third incident this year a boat smuggling either drugs or humans landed on the secluded beach— not to mention the discovery of an empty panga during the year possibly marking a successful trip.

“It’s ridiculous,” Redfield said. “I live in one small area and it’s just gotten out of hand. It’s been pretty disruptive.”

An affidavit released shortly after stated that U.S. Border Patrol agents used an infrared device to spot a boat with an outboard motor riding extremely low in the water with its lights off heading toward Abalone Cove around 5:30 a.m.

Police officers came across two vans in the area about the same time and arrested the drivers on suspicion of aiding the traffickers.

Officers then spotted three of the migrants running across Palos Verdes Drive South in order to hide in a drainage ditch, the affidavit said. They later arrested 21 from the boat, reportedly wet and sandy, and found the wooden panga boat set adrift.

Redfield said he saw one of the migrants pop out of the bushes in his backyard and ask for help. Redfield, who’s an artist and sympathizes in part with undocumented immigrants, considered for a moment offering assistance. 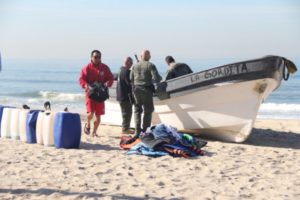 “My first thought was to help the guy but I started to think about the week before when a coast guard officer was killed by a panga that rammed their boat and decided not to,” said Redfield, adding that he’s still not sure they actually caught the guy in his bushes.

Rancho Palos Verdes Mayor Susan Brooks said the incident Dec. 10 and others like it in recent weeks are concerning, including a Mexican panga landing near Torrance beach full of marijuana in November.

“Everyone is concerned, particularly people down in that area,” Brooks said. “If I were living down there I would be concerned. That’s why we tell people to lock their doors and lock their windows.”

Brooks said the city has increased its patrols this year, including by reserve officer volunteers, first in response to an early release program at L.A. County jails and now to patrol the coastline for smugglers.

“Right now we’re working so closely with the Sheriff’s Department and the Coast Guard,” Brooks said. “The silliness of the whole thing is that they should be forewarned that we now have, thanks to homeland security and local police authorities, live satellite tracking devices.”

Experts say the increase in panga boat activity coming up from Mexico into the L.A. area represents the shifting tactics by smugglers. In response to stepped-up land and air enforcement, illegal traffickers began turning to the sea routes with more frequency about six years ago, said Adam Eggers, spokesman for the US Coast Guard in Southern California.

“If your smuggling route has been cut off, the easiest answer is to go further out to sea and further north,” Eggers said. “About three years ago, we started to see a spike in the Los Angeles area because they weren’t successful in San Diego.”

Now smugglers often travel with two boats, one carrying the cargo – usually either marijuana or migrants – and another boat carrying fuel because they have to travel so much further.

The number of trafficking incidents by sea since 2010 has nearly doubled, according to U.S. Customs and Immigration Enforcement, with more than 500 reported in the past two years. Other than San Diego, Los Angeles County attracted the most pangas, with 37 incidents since 2010.

For the smugglers, a successful run means possibly a big payout. Human cargo typically pays about $6,000 per person, experts report.

“In Palos Verdes they’re seeing beaches that aren’t populated and not easily seen from the top of the cliff,” Eggers said. “That’s one of the big things you see when we have these crafts come ashore. Specifically, if their counterparts are located in this area, then that’s an easy place to go.”

Coast Guard as well as Immigration and Customs Enforcement officials are not sure whether any smugglers has been successful in landing at Palos Verdes, but Redfield recalled several reports of empty pangas found along PV this year alone.

It was in 2008 that pangas started showing up abandoned more frequently on Southern California beaches beyond San Diego. And despite the increased enforcement, the volume of drugs being smuggled appears to have increased five-fold over the past year, said Virginia Kice, ICE spokeswoman.

“Now we’ve had vessels landing as far north as the southern border of Monterey County,” Kice said. “You’re talking about hundreds of miles of open ocean. These vessels are going in some instances more than 100 miles out to sea and then making a 400 mile journey northward.”

The open-hulled fishing vessels were not designed for the large swells and high wind. Often with primitive navigation equipment and little to no safety gear, the boats sometimes end up where they do not intend. One panga recently landed at the Naval Weapons Station in Seal Beach.

Smugglers are also trying to ferry their cargo to pleasure crafts on the U.S. side that can enter harbors undetected, said Kice, who urged residents to call local law enforcement if they see something out of the ordinary.

“If you see something, say something,” Kice said. “While we are utilizing increased land based and aerial activity to track this activity, sometimes the biggest tips we get are from locals that see something amiss. They might see a van or larger vehicles pull up and people hang around like they are waiting for something.”

In Rancho Palos Verdes, neighbors are keeping a close lookout along the bluffs, said Gail Lorenzen, volunteer coordinator of the neighborhood watch program. In the event of an emergency, Lorenzen can quickly reach each of the city’s 500 block captains to warn them of any imminent dangers, including suspected traffickers in the area.

“It’s happening right on our shores and so we’re concerned about it,” Lorenzen said. “All of us have to be watching, but of course they are coming in the early morning hours when most people are asleep.”

“The best way to describe it is a cat and mouse game,” Eggers said. “But federal government is not always the cat.”

Related: $1 million worth of marijuana siezed after boat runs aground near Palos Verdes Estates