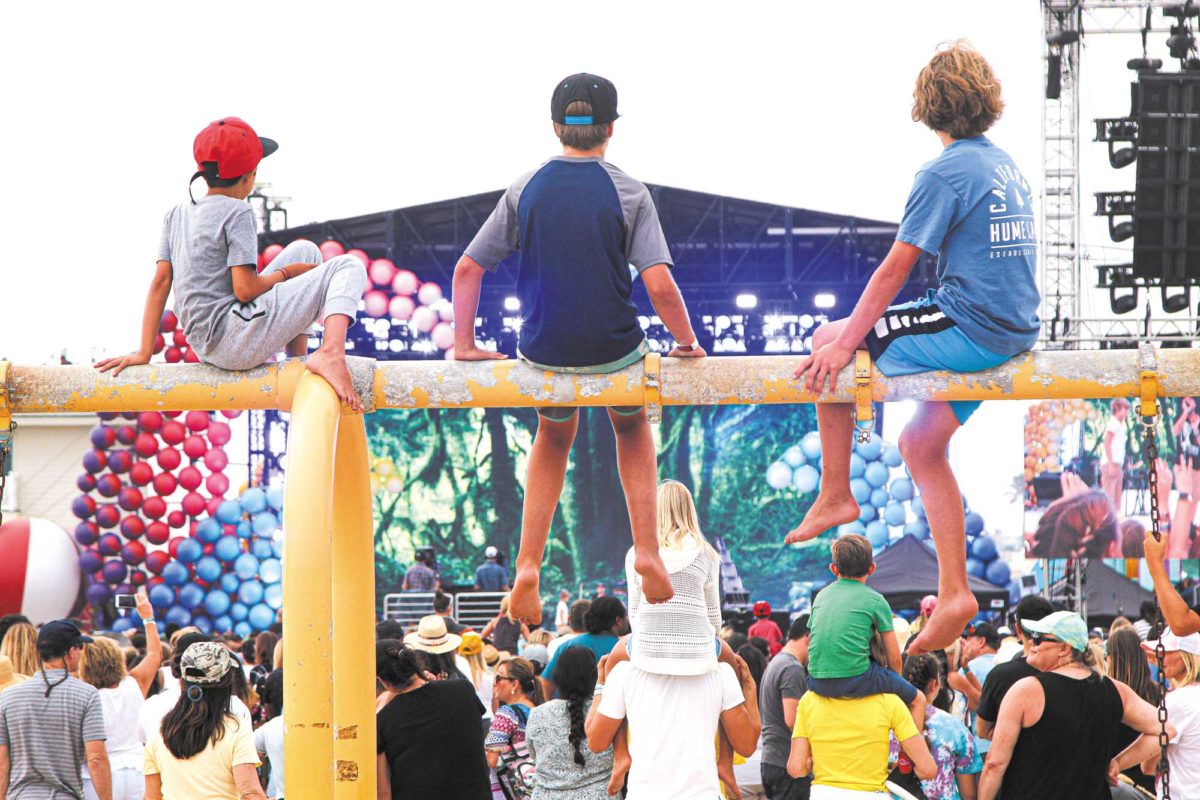 Hermosa Beach’s long simmering controversy over large events downtown and on its beach received a four-hour-long public airing last Wednesday during a joint City Council/Parks and Recreation Commission meeting. The focus was on the Sunday, Aug. 11 Teen Choice Awards. But the discussion spilled over to the Summer Series beach concerts, on the following two weekends, the AVP Hermosa Beach Open on the weekend preceding the Teen Choice Awards, and Hermosa Fiesta on the Memorial and Labor Day weekends. The four events filled six of the past summer’s 15 weekends.

All but four of the remaining summer weekends had city-permitted beach events, among them the International Surf Festival, the Hermosa Beach Triathlon, the South Bay Paddleboard Race, and the Smackfest, CBVA, and AAU Jr. beach volleyball tournaments.

Council members expressed general support for the events. Parks and Recreation commissioners expressed reservations. And most businesses and residents who spoke at the meeting opposed the events.

The Teen Choice Awards were staged in a fenced-off area on the beach, south of the Hermosa pier. The show aired live on Fox Cable and honored two of pop music’s biggest stars, Taylor Swift and the Jonas Brothers, and also actor Robert Downey Jr. Their selection was based on ballots cast online by 55 million fans.

“The Teen Choice Awards was a special event for our teen population, whom we don’t often have events for. I was happy to have my kids there,” Mayor Stacey Armato said. “If this is something the community wants in 2020 and [producer] Bob Bain wants to bring it back, I know we can work together to make it a very successful event.”

Resident Anthony Higgins followed up on Guheen’s comments by asking, “What special events do we need? That’s the 800 pound gorilla in the room.” 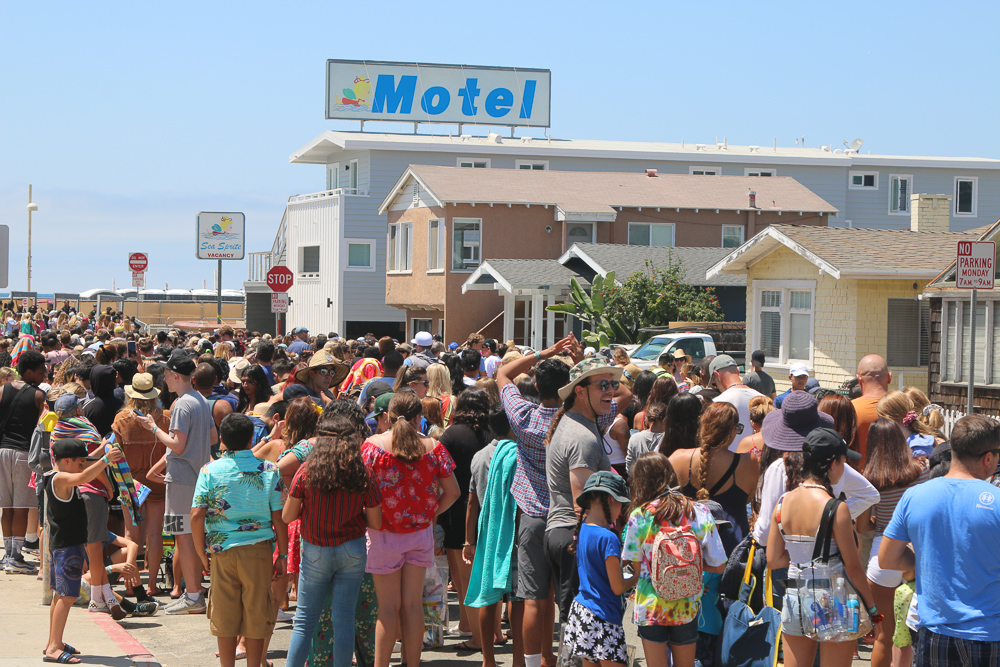 Access to businesses on Beach Drive and residences on 11th Street was restricted to accomoidate Teen Choice Awards crowds. Photo by Kevin Dody

Business owners at the meeting complained large summer events hurt business during their otherwise busiest weeks of the year. A survey completed by 25 downtown business owners attributed $180,000 in lost sales to Teen Choice, as a result of lost parking. Staff estimated the downtown business losses could run as high as $500,000. The three downtown parking lots and some street parking were reserved for the production company beginning the Thursday prior to the event.

Hermosa Cyclery owner Steve Collins accused the city and the production company of  “commandeering” his business those four days by blocking auto access and restricting pedestrian access to his Beach Drive shop, half a block north of Pier Plaza.

“You need to talk about reparations to the mom and pop businesses who underwrote the multimillion dollar production company who sold the show to a billion dollar cable network,” Collins said during the meeting’s public comment period.

“When I first heard about the Teen Choice Awards, I was positive about it. But the wounds were self-inflicted. You didn’t talk to the businesses. If you had told me you were going to wall off The Strand and Pier Plaza, and take away parking for nearly a week, I’d have told you you were  crazy,” he said.

“You had snipers on the roof. You didn’t need a 10-foot-high screen to protect the “blue carpet” celebrity reception in front of my restaurant. Kids were standing on chairs trying to look over the fence to see the celebrities and got pulled down by security. The Parks and Rec commissioners have had the best things to say tonight, and they were locked out of the process.”

Pat Graham, owner of Paradise Bowls on Hermosa Avenue said, “When I got to work at 8 a.m. the morning of the event, downtown was a ghost town. People couldn’t get there. The city handed the production company the keys to the town. We paid for their event. And the city got essentially nothing. I don’t understand how an event of this magnitude could be approved by staff with no input from the businesses.”

Staff approved the event, prior to presenting it to the Parks and Rec Commission, or the City Council.

According to the city staff report, El Segundo-based Bob Bain Productions’ first meeting with city staff was Jan. 14. Its event application “requested approval be kept confidential due to the timing and broadcasting requirements…”

Two months later, on March 25, staff issued an administrative approval for the event. During this period Bain Production representatives met with council members individually. But Parks and Rec commissioners, who normally review event applications, said they did not learn of the event until it was listed on a council agenda posted 24 hours before a special, May 31 council meeting. At the sparsely attended, Friday evening meeting the council unanimously approved a location agreement for the event.

“Administrative approval” of special events was approved by the city council in 2017.

Community Services Director Kelly Orta explained at Wednesday’s meeting, “Administrative approval is used for events we can’t plan for in advance, like memorial services, and the Kings Stanley Cup championship parade. It is rarely used. We’ve only used it three or four times.” 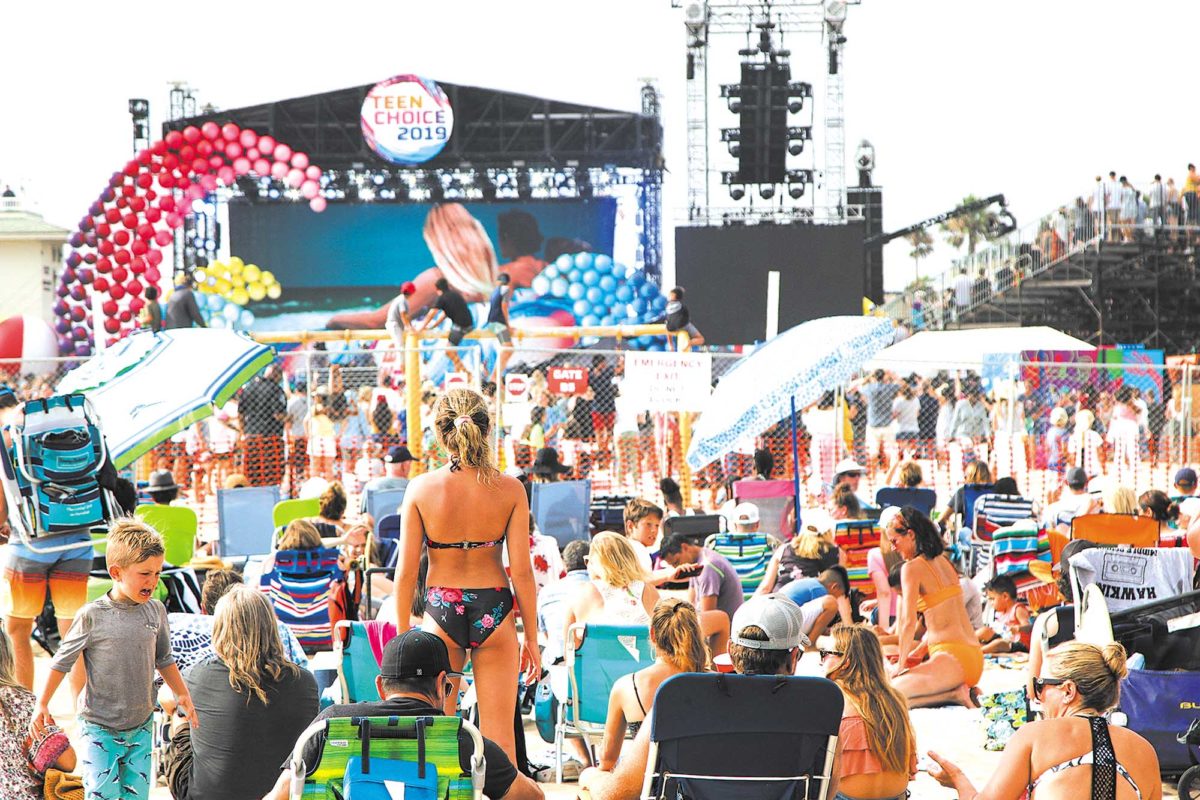 Fans unable to get tickets for the enclosed area  watched from behind the enclosure. Photo by Kevin Cody

City manager Suja Lowenthal said she anticipated the Teen Choice Awards benefiting not only teens, but also local businesses, by  “showcasing the city.”

“We wanted to provide long term benefits to businesses and give our youth a once in a lifetime opportunity to enjoy a great event. We wanted to reorient our teens to the outdoors, which is not as easy as it used to be. And it was a rare opportunity to bring kids and parents together,” Lowenthal said at the Wednesday meeting.

Teen Choice Awards paid $138,381 to the city and to the Los Angeles County Fire Department, according to the staff report. The largest amount, $54,481, went to “police and security.” Hermosa police enlisted Redondo and Hawthorne SWAT teams, Inglewood K-9 teams and the FBI, according to acting police chief Milton McKinnon. Security was heightened because of recent “active shooter” incidents, McKinnon said.

“The city is not a for profit entity. The idea for events is that they are good for the city. I’m surprised people think we should be making money on events,” Councilman Hany Fangary said.

Resident Ira Ellman, whose wife Barbara is a Parks and Rec commissioner, disagreed.

“Hermosa should look at event fees the way colleges look at football revenue,” Ellman said. “They could be used to pay for other parks and rec programs.” He proposed a daily beach fee of $10,000 to $15,000.

“This was the Teen Choice Awards’ 21st year, but the first not held at an indoor venue. Though it was very challenging and hugely expensive, for us it was successful and the network loved it.

“But the question is, is it worth it to you? As a Manhattan Beach resident, I totally sympathize with the sense that there are too many events here in the summer,” Bain said.

Bain said his initial application was for the second week in September, when the sun sets earlier so the show could be filmed at dusk, during what photographers call the “magic hour.” A fall date would also have avoided complaints about Swift and the Jonas Brothers not performing at the event. Bain said, major artists are prohibited from performing by a “blackout” clause in the contracts for the MTV Video Music Awards, held this year on Aug. 26.

“I marched into my meeting with the network with the September date and was told, very flatly, do it in August or don’t do it because they wanted to engage back to school sales.”

“Sales rules the roost,” he explained.

Councilmembers, commissioners and even residents and businesses all praised Bain for the quality of the production.

“There were a lot of happy kids talking about this at school,” Councilman Justin Massey said.

“You did a live show from a location that’s not hard wired like a conventional venue, which hardly anyone does anymore. I can’t think of many large scale events that are both teen and adult friendly. I saw how the city looked on TV. And if I were someplace else, Hermosa is where I’d want to go,” Councilman Jeff Duclos said.

“This was a first time. Most of the concerns raised can be corrected. We can find ways for downtown businesses to monetize this event,” Duclos said.

By the time the meeting ended at 11:30 p.m., even some of the business owners apperared to softened their positions. Lori Ford, owner of Gum Tree Cafe and Gifts, after objecting to the downtown businesses being excluded from the planning, said, “We’re entrepreneurs. We could  have helped. We gladly would have helped.”

“The takeaway,” Mayor Armato said after the meeting, “is we’ve opened up a conversation with the businesses. It’s been a long time coming. Shame on us. But in the future, businesses will have a seat at the table for special events.” ER