Teens pulled from a mighty riptide 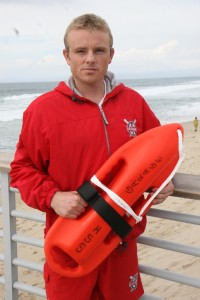 Lifeguard Jeff Monroe holds a floatation can like the one he used to rescue three teenagers from a powerful riptide. Photo

Some of them tug slowly at ocean swimmers, pulling them gradually away from shore, where they seem stalled in place as they try to swim back to land. The swimmers can pull themselves out by moving parallel to the shore, or can just keep stroking toward shore until the riptide dissipates.

Then there are rips like the big, fast, mean one that caught three teenagers standing in thigh-deep water last Wednesday, whipping them instantly into a watery chaos that would have drowned them if lifeguards hadn’t dashed to their rescue.

“You can tell everyone we thank the lifeguards,” said Andrew Johnson, 18, one of the three who were plucked from the riptide off 22nd Street in Hermosa.

“I guess we’re lucky to be alive,” said his friend Raphael Portillo, also 18.

The two friends and a third, Nick Carranza, 16, waded into the water, and were standing in thigh-deep, 59-degree water as the riptide approached them. They did not see the riptide, but Los Angeles County lifeguard Jeff Monroe did.

Monroe, 31, was stationed at the Hermosa Beach Pier, and trotted down the beach toward the trio when he saw them enter the water.

“I had looked down to 22nd Street and saw a couple of guys going into the water without wetsuits, so I started down there,” Monroe said.

Given the lifeguards’ thin winter staffing, Monroe and his colleagues at the pier were the closest to the three friends.

Meanwhile, although the friends didn’t know it, they were standing on a sandbar that ran parallel to the shore, and there was a break in the sandbar near them. That break created a channel that sent water rushing with great force from the shoreline back out to sea.

“It’s like a river in the ocean,” Monroe said of the riptide.

Monroe could not see the break in the underwater sandbar, but he did see a corresponding break in the incoming waves where the channel formed, and he saw a great flow of agitated water roaring mightily out to sea, forming a riptide as long as the pier.

Monroe dashed along the sand, using his bullhorn to tell the teens to move away from the riptide, or rip current, as lifeguards call it. Back at the pier, other lifeguards were hopping into a truck to follow Monroe, and the lifeguards’ Baywatch boat was rushing over from King Harbor in neighboring Redondo Beach.

The teens scrambled to move away, but the riptide sucked the sandbar from beneath them and hurled them helplessly into its narrow, fast-moving middle, the portion lifeguards call the neck.

“We didn’t see it until it had us,” Portillo said.

Then all was chaos. The three were repeatedly hurled underwater, coming up sputtering feebly for air. They fought the rip to no avail, tiring themselves. They kept taking in more water and less air. All three thought they were goners.

“When I would come up, I would try to cough the water out of my lungs,” Portillo said. “I thought, ‘I’m going to die.’”

Meanwhile, Monroe, carrying a streamlined plastic floatation can, reached the riptide and hurled himself into it.

“It was the only way I could match their speed,” he said. “I hit the water, and this rip was really powerful.”

As Monroe shot along the neck, he knew he was nearing one of the teens.

“It was really choppy, I couldn’t spot the victim very well,” he said, “but I could hear him yelling for help.”

The lifeguard caught up with one of the teens near where the waves were breaking.

“He was in bad shape, he was really panicked. He tried to climb onto me, and I sort of shrugged him off. I showed him the can and he realized, okay, that’s what we’re going to grab onto, it’s going to be okay,” Monroe said.

“Off to about 2 o’clock I saw the other two victims. I yelled to them to calm down, stop swimming, and just tread water,” Monroe said. “I got to one of them, then the other, and then I had all three hanging onto the can. ‘You can take a deep breath, you’re safe now. It’s all good.’”

Portillo said Monroe reached the teenagers “just before I passed out.”
By then the teenagers and their rescuer had traveled nearly the entire distance of the riptide’s powerful neck, almost to where the head mushroomed out and dissipated.

Lifeguards Brian Merrigan and Eric Hendrickson arrived in the truck, plunged into the water and helped Monroe swim two of the teenagers to shore. Lifeguards aboard the Baywatch got Portillo into the boat. The riptide had torn off his cutoffs, leaving him naked.

None of the teens suffered any lasting injuries, although Carranza was hospitalized briefly as a precaution.

Monroe said he engages in a rescue about once every two weeks, but rarely sees one as intense as this.

“This particular type of rescue does not come along very often,” he said. “It was a wild one.”

He said tall, powerful waves had chewed up the ocean’s sandy bottom, creating the right conditions for powerful riptides.

Carranza’s mom, April Berryhill, said the lifeguards were “very modest” about the rescue and did not want any special gesture of gratitude for – in their view – just doing their jobs. She contacted the local newspapers to offer a public thank you.

“I just want to give a shout out to the lifeguards,” she said.

Riptides are channelized currents of water flowing away from shore at surf beaches. Riptides are common, and typically form at breaks in sandbars or near structures such as jetties and piers.

Riptides can vary in speed from moment to moment and can quickly speed up and become increasingly dangerous. The United States Lifesaving Association offers the following clues that a riptide might be present:

• A channel of churning, choppy water

• A difference in water color

• A line of foam, seaweed or debris moving seaward

• A break in the incoming wave pattern

If caught in a riptide:

• Escape by swimming in a line parallel to the shoreline. When free of the current, swim at an angle, away from the current, toward the shore

• If it’s not possible to escape, float or tread water. When the current weakens, swim at an angle away from the current to the shore
• Any time you feel you cannot reach the shore, draw attention to yourself. Face the shore and call or wave for help

To help someone caught in a riptide (be advised that many people have died trying to rescue riptide victims):

• Get help from a lifeguard

• If a lifeguard isn’t present, yell the above listed instructions on how to escape

• If possible, throw the victim a floatation device