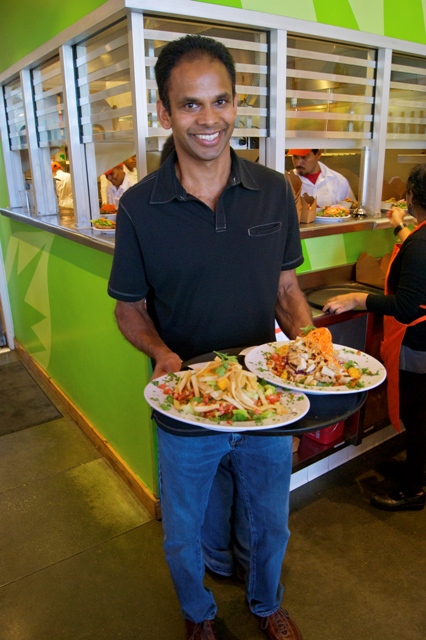 Veggie Grill co-founder T.K. Pillan wanted a friendly casual feel at his restaurants, including this one in Rolling Hills Plaza. Photo by Ciley Carrington

Veggie Grill co-founder T.K. Pillan wanted a friendly casual feel at his restaurants, including this one in Rolling Hills Plaza. Photo by Ciley Carrington

“Our motto is ‘Taste and Believe.’ We believe if people try it, they will have their minds changed”

It was by no means inevitable that the restaurant that Manhattan Beach resident T.K. Pillan co-founded would serve vegetarian food. At the time he started the project, he wasn’t a vegetarian.

“My parents were vegetarian, but I grew up on a standard American diet. Mine was the first Indian family in our neighborhood outside Boston, and my parents wanted me to fit in. I grew up on burgers and fries, fried chicken, and I was still eating that as an adult.

“My original concept for a restaurant was wholesome fast food, and I wasn’t sure how to achieve that. It wasn’t until I explored plant-based foods and discovered all the things that could be done with marinades and sauces that I realized you could make this food healthy, tasty, and fun.”

“I went to MIT and studied engineering. When I got out of college I went to work with a computer systems firm. I came to California in 1992 because the company had a large contract with Hughes Aircraft. I got used to the fun in the sun and transferred out here permanently.”

Pillan laughed at the suggestion that all computer experts live on pizza and don’t exercise because it described his father.

“My dad was an engineer, drank 10 cups of coffee a day and smoked two packs a day. I’m not an engineer at heart — I grew up very athletically inclined. I was a team captain in high school and played college baseball and basketball.”

“I settled in the South Bay and went to UCLA business school, and in ’96 helped found a web development firm. This was the early stage of the e-commerce boom, and we were one of the first in the LA area with that skill set, so we did very well. We sold it at the right time, about seven years ago.”

“I took a little time off to travel with my wife, but after six months I decided I needed to figure out what to do next. I found myself wanting wholesome fast food, and wondered why it didn’t exist. I read an article in the LA Business Journal in 2005 that mentioned that the top 10 franchisees here were all pizza companies, and I started wondering if anyone could make convenient food that I could feel good about. It was my pie-in-the-sky idea. I had no background and no ability, I just wished there was something out there that I could eat and enjoy. A friend ran a concept for a restaurant by me, and I asked, ‘Can we make it wholesome and convenient?’ That didn’t work out, but it got me excited about the idea.

“I was still looking at other technology ideas because that was what I knew, when I was invited to a meeting by a friend named Kevin who was looking at investing in a company. We decided that it wasn’t something we wanted to do, but we sat down for coffee afterwards, and he asked, “So what else have you been thinking about?”

“I hesitantly mentioned the need for delicious, wholesome, convenient food, and I thought he’d just laugh it off. To my surprise, he was intrigued by it.”

The friend was Kevin Boylan, an entrepreneur with experience in business and finance. The two men engaged in both conventional and unconventional market research, conducting surveys and traveling around America to eat in healthy restaurants.

“We found that the organic food business was growing at 20 percent a year. Trader Joe’s and Wholefoods were taking off, and 75 percent of people were surveyed were unhappy with their fast food choices. SuperSize Me and Fast Food Nation had just come out. We decided it was not just us, there really was a market.

“The next step was to go on a restaurant tour. We visited every healthy restaurant we could find in Southern California, New York, and San Francisco. My wife may have thought it was all just a lark, an excuse to go out and eat in different cities, but we learned a lot. Many of the places we visited turned out to be vegetarian, and we had our share of tofu and sprouts experiences – food that was healthy but it just didn’t taste that great. We were looking for food that was wholesome and delicious and convenient. We did find some plant-based proteins that were delicious when you used the right techniques, marinades, and sauces.”

In the course of their research both men became enthusiastic vegetarian converts, for both the health benefits and the flavor possibilities. They began to wonder whether the food they were enjoying so much would be a commercial success, so they decided to enlist others in their research.

“We brought our friends and family to try some of the restaurants we liked, just to be sure we weren’t fooling ourselves, and we got a very good response. They may not have been fans of the style of the places, but people said over and over, ‘If you could make this food convenient and serve it in a place I’d enjoy, I’d eat here twice a week.’

The idea for the Veggie Grill had been born, but there was one missing piece of the puzzle. Neither Boylan nor Pillan could cook, or wanted to. They found their third partner in Ray White, who had created the recipes for Native Foods restaurant in Westwood.

“Our next challenge was to get people to try it. We spent a lot of time on the name and on the design of the menu. Terra Grill and Vegetarian Grill were both on the list. We didn’t want “Vegetarian” to be in the name because that would make people think we wanted to exclude meat eaters, but we liked the word grill a lot. We decided Veggie Grill sounded friendly and casual.”

The first Veggie Grill opened in 2007 in Irvine. There are now seven restaurants in the chain, with more planned. As Pillan and Boylan hoped, they are attracting people who don’t usually frequent vegetarian restaurants.  Over 80 percent of their customers are omnivores.

“Our menu gives you a spectrum – there are items like our All Hail Kale salad that contains quinoa, red cabbage, walnuts — all these superfoods. The nutritional profile is off the charts. Lots of people didn’t even know what kale was when we started. They had only seen it used as decoration. We joked that we would have a low food cost because we could go to other restaurants and take it from around their salsa containers. Now that people have tried it, they love it.”

“We want to become a national chain, and I believe this food will go over well in Des Moines or Boise. Our motto is ‘Taste and Believe.’ We believe if people try it, they will have their minds changed. We can pull out a map and look at everywhere a Wholefoods and a Trader Joe’s are, and say, there’s our demographic. They’ve done a lot of the homework.”

Pillan is planning ahead for the day when there are Veggie Grills in every metropolitan area, but he finds time to dine around the South Bay.  He has kind words for the vegetarian selection at MB Post and Mucho, among others. Asked if there is any chance he will leave the restaurant field as abruptly as he entered it, he laughed and answered emphatically in the negative.

“Now that we’ve made this restaurant chain a reality, we’re staying with it. There are a lot of psychic rewards in this business, a lot of people who are grateful for what we do. Walking around the restaurant seeing people enjoying themselves is a reward you don’t get in the technology business.”