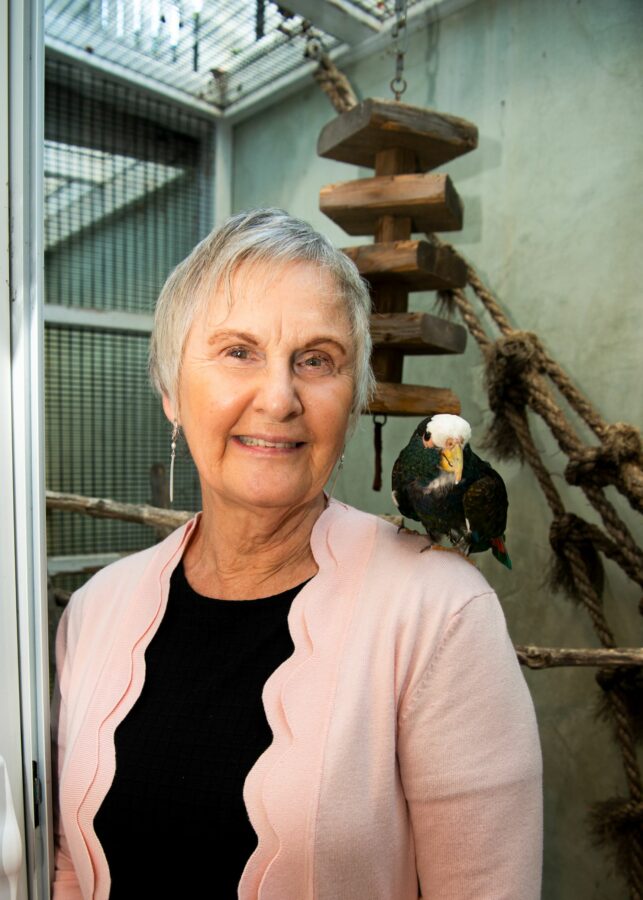 “You want pets that fit in with your family’s lifestyle, or don’t get one,” advises Janet Ragonesi, who rescues birds 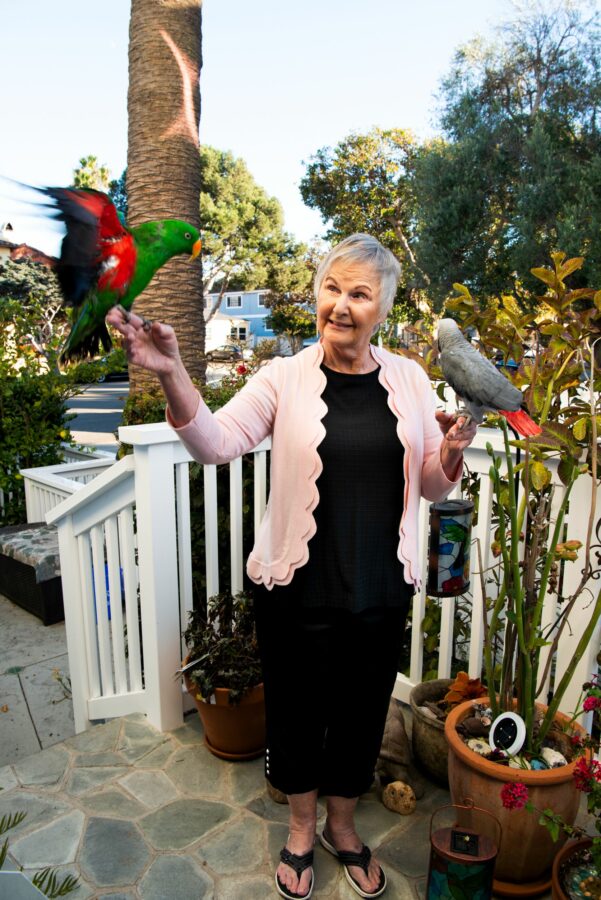 by Stacey A. Morse

The South Bay Bird Society’s founding in 1974 traces to the theft of an African Grey parrot named Pepper in Hermosa Beach. Then-Hermosa residents Janet and Leon Ragonesi were “cat people,” not “bird people,” but they joined in the search anway. Though the search was unsuccessful,it led the couple to meet up with other bird lovers. The couple enjoyed their company, and admired their commitment to community service.

“We thought, ‘Wow, this could be fun,” Janet Ragonesi said.

Ragonesi is currently the South Bay Bird Society’s president and is preparing for its annual fundraising auction. This year’s auction will be online from Dec. 2 through Dec. 5

Ragonesi was surrounded by bird cages in the Bird Room of her Redondo Beach home when she described the South Bay Bird Society’s rescue efforts. Her husband of 33 years passed away in 2015.

“He had a good life,” Ragonesi said. “We worked hard together for the work I do now.”

Only one of her many birds, Sophie, was purchased from a breeder. The male, African Grey arrived shortly after being weaned from hand feeding to eating on his own. 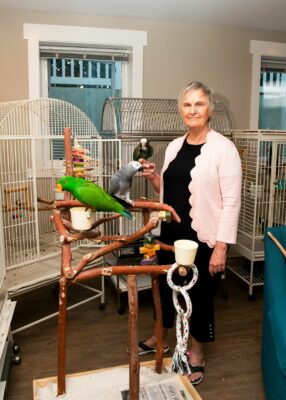 Janet Ragonesi at home in her Bird Room. She is holding Seattle, a Pionus Parrot.

Six months later, eight-month-old Seattle, a Pionus (pie-OH-nus) Parrot, came up for adoption. His prior owner realized his family didn’t have enough time for the bird.

“People don’t do their homework,” Ragonesi observed, as Seattle stood by, offering up low clucking noises. “Leon and I spent a year figuring out which kind of bird fit into our family’s lifestyle and why. We didn’t just buy one that matched the furniture.”

“It’s part of responsible pet ownership,” she said. “It’s taking that extra step, knowing that the bird is going to be part of a family. You want pets that fit in with your family’s lifestyle, or don’t get one it. Or else you’re going to be calling me, saying, ‘Oh, we don’t have time for it – we didn’t realize.’”

Sophie passed away at age 13, from a heart condition. Parrots often live to be 70 years old.

Ragonesi’s next bird was Oliver, a Severe Macaw, also called a “mini” Macaw. Oliver, hearing his name, made  a small ruckus, until Ragonesi took the bird from his roomy cage and settled him gently onto her hand. Oliver is more than 50 years old. Ragonesi treats him like a beloved parent, and he settles down quickly.

Oliver was in a sad state when Janet and Leon discovered him living in an area thrift store. “The owner was only feeding him peanuts. Someone had told him that was okay,” Janet said. It took months for the couple to convince the owner to part with the ailing bird.

“He’s too noisy,” the owner said when he gave up the bird.

“When my husband went to get him, Oliver threw down the peanut in his hand. He knew we were coming to get him.” Oliver chuckled. “Yes, you just knew it,” she answered him. “He had E. coli, an overgrown beak, and could hardly perch. He was heading out the door.”

Oliver still has seizures, but is generally healthy, thanks to the Ragonesis and veterinarian Teresa Micco, of the Point Vicente Animal Hospital.

“He has different calls for when he’s calling me, just happy, or needs something. I can hear him anywhere in the house – just like any mother. Oliver is my sentinel,” she said

Ragonesi’s grandchildren love the birds, and treat them well, but when teaching other children, and adults, she is careful to explain, “No fingers. And when they scream – and they will, don’t scream back.”

“Not all birds are willing to talk,” she said. “The question is, can you talk parrot? Can you read their body language? That’s what we, as responsible pet companions, need to know. So don’t just go looking for a bird that talks, because they [only] talk if they want to.” She motions to a bright red Eclectus parrot. “Scarlett over there used to talk – she hasn’t spoken in 10 years.”

“Perhaps she has nothing to say.”

Female Eclectus are red, while the males are green. Scarlett’s cage mate, Joey, is “green,” indeed, a younger man. “They’re not mated. He’s 21 and she’s 28. Joey really likes Scarlett, and she tolerates him.”

The South Bay Bird Society seeks to educate the community through outreach, meetings, newsletters and events. Members answer questions, and help with rehoming and rescues. The all volunteer society partners with Fine Feathered Friends Foundation in El Segundo.

You don’t need a bird to join or help South Bay Bird Society; Anyone can be a member. “We do not discriminate,” Ragonesi said. 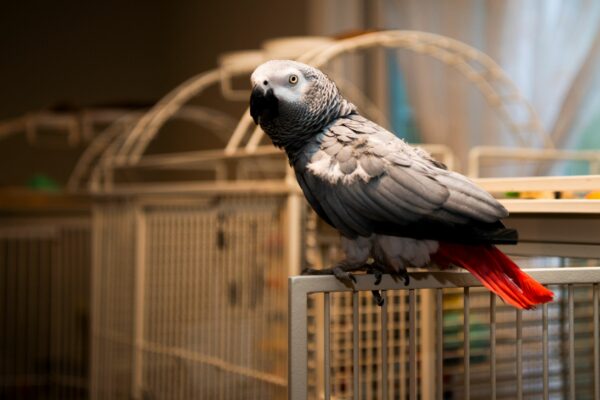 When Ragonesi moved from Canada to California, she taught dance, yoga, aerobics and emergency preparedness at Cal State Dominguez.

Ragonesi has taken in birds from difficult situations. She has two birds from garage sales. The owners had died. Some Bird Society members teach how to look after birds with special needs.

“My birds are in my will. They are part of my family. They are a flock. You have to set it up in advance. Don’t leave it for others to do. Consider a dowry (for your pets), and include information about each one in your will.”

“Yes, things change, and you might have to rehome them at some point. And that’s okay. Our society is here to help, and we educate the public, as well as ourselves.”

Ragonesi stressed she is one of many bird benefactors who are members of the South Bay Bird Society. Board members include Diane Civas (CFO), Karen Allen (owner of Birds & More in Lawndale), Gala Burkholder (editor of the newsletter), Marie Calleja (president of Fine Feathered Friends Foundation, and also a member of the South Bay Bird Society), and webmaster David Benjamin.