The dog rescuer – Dogs bred in South Korea for consumption are adopted in the U.S. 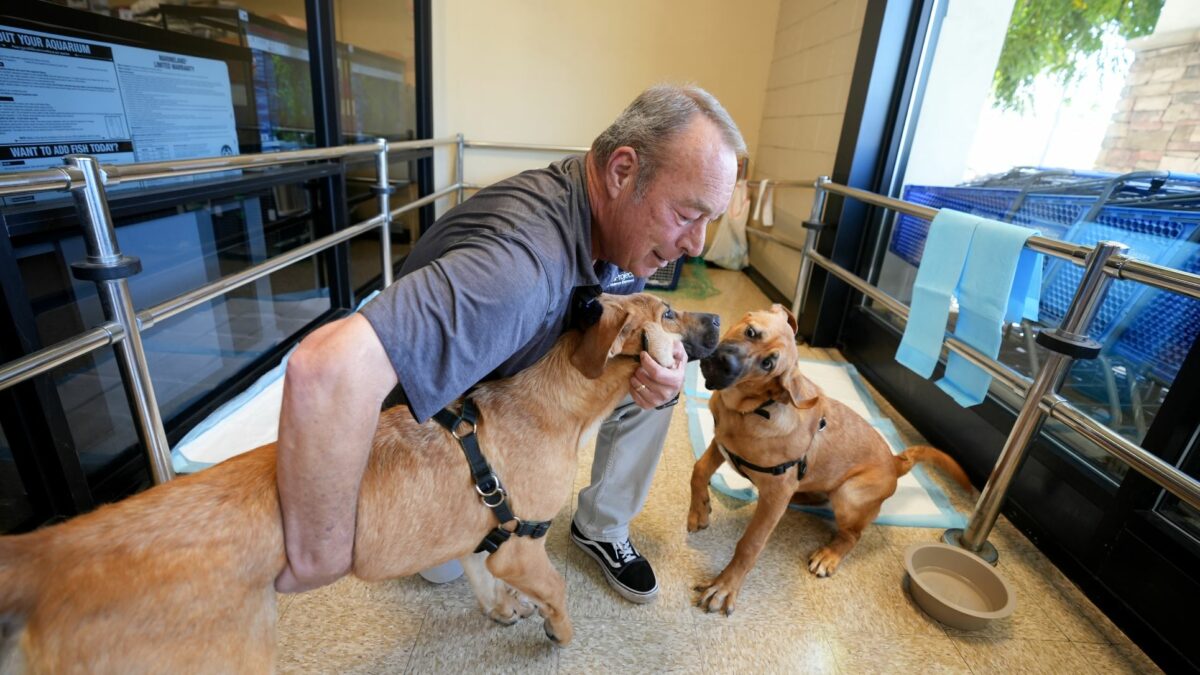 Every few weeks Hermosa Beach resident Joe Bahm heads to LAX to pick up a special package from South Korea.

He tracks the flight’s arrival time and scans the international terminal for two couriers who match the photos on his phone.

“Sometimes my hair stands on end,” said Bahm, a volunteer with DOVE Project (Dogs of Violence Exposed). “I know they’re safe now and they’re not going to be in someone’s pot.” Since 2016, the Los Angeles based non-profit has rescued about 1,000 dogs from South Korean dog farms where the animals are raised for slaughter. While the practice may horrify Americans, it’s a longstanding custom in South Korea, and other Asian countries. Historically, dogs have been considered livestock, not pets. During World War II and the Korean War, dogs were an important source of protein for the malnourished Korean population.

“It’s good for you,” said a 65-year-old South Korean woman who lives in the South Bay.

When she grew up in Korea, her mother often cooked “delicious” dog meat stew for the holidays.

Though dog meat restaurants are common in Asian countries, they are attracting fewer young people than in generations past.

“I personally will not try it,” said flight volunteer Teagan Boram, who helped transport rescue puppies Mila and Ruby from Incheon Airport in Seoul to LAX last month.

Bahm said he respects Korean culture and does not want to villainize the farmers; he just wants to save dogs.

“I respect their culture. But what I don’t respect is how they torture the animals,” Bahm said.

The dogs are housed in crowded pens, raised from the ground so their feces can fall through the grates at the bottom of the cages. Their feet never touch the ground, until they are taken out for slaughter. 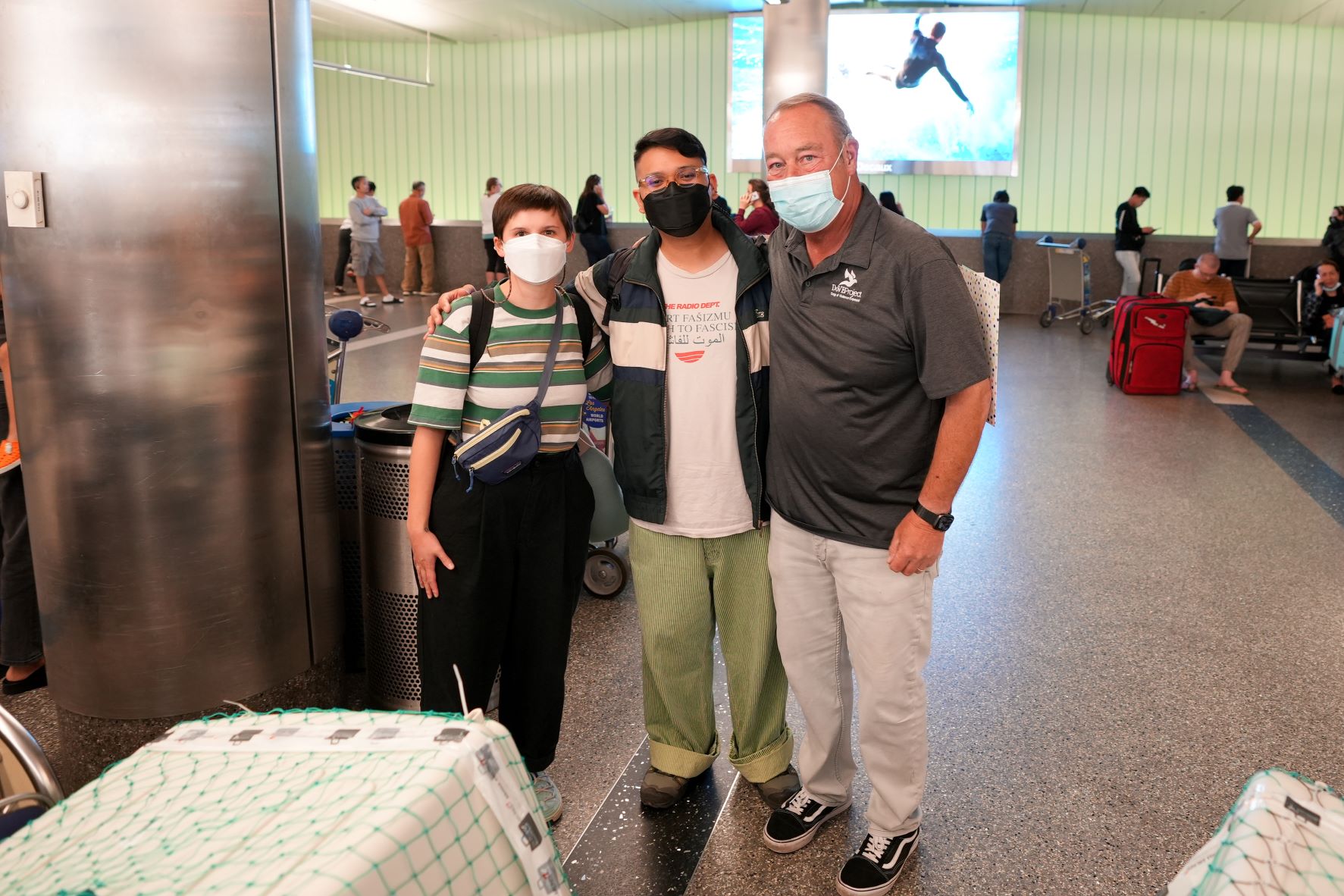 Flight volunteers Teagan Boram and Karl Sunglo arrive at LAX after a long flight from Incheon Airport in Seoul. DOVE’s Joe Bahm is there to meet them. Photo by Jefferson Graham.

According to a South Korean activist group, about 2.5 million dogs are slaughtered each year. Some are hung by their necks, others are electrocuted, a practice many consider cruel.

“If any animal sees another animal slaughtered in front of them, they’re going to have feelings. They can smell and feel fear,” said PetSmart dog trainer Tory Haslinger, who has trained half a dozen DOVE dogs in the El Segundo store.

Some of the dogs are extremely shy. They have not been socialized, and arrive after a long and scary plane ride to a totally different environment, and a new language, she said.

“They’re awesome dogs,” Haslinger said. “They just need to decompress and adjust to their new environment.”

Bahm said he first heard about DOVE when he and his wife Magna were looking to adopt a dog. Magna now works for the non-profit, screening families and serving as logistics coordinator.

“We went from Santa Barbara to San Diego looking for dogs. Most rescues wouldn’t return our calls. Or they’d call back and say ‘Oh, that dog was adopted a month ago.’ It was horrible,” Bahm said.

In June 2018, the family finally found a DOVE dog on the Adopt a Pet website. DOVE offers South Korean dog farmers monetary compensation to shut down their operations. This spares the dogs a horrendous end of life experience.

The Baum family applied for Chinta and received the dog three months later. Chinta was rescued from an open-air, wet market where animals are butchered on site. A sign above her cage read “Great for Bone Broth.”

“How could anyone make soup out of this?” Bahm said, tears welling up.

“She has a mellow personality,” Magna Bahm said. “She most likely didn’t see other dogs being dragged out of their cages, or see the slaughter of other dogs.”

With so many local adoption shelters busting at the seams, why adopt a dog from a foreign country for much more money?

DOVE usually charges an $1,100 adoption fee, which covers the cost of transportation. Bahm defends the price, which covers flight costs for volunteers at the airport, paperwork, and provides dogs with a certificate of quarantine before getting a medical clearance at Incheon Airport.

“The likelihood of these dogs getting adopted in South Korea is pretty low. Once they’re deemed a meat trade dog, they have no chance. Nobody wants them. They’re not seen as pets,” he said.

Bahm has partnered with PetSmart in El Segundo. He drives the dogs to the store, where he uncrates them before they’re turned over to their adoptive, or foster families.

“Hi Mila. Hi Ruby,” Bahm says as he kneels in front of their cages, slowly opening the door to a whole new world of different sights, sounds. “Welcome. Welcome guys. Welcome to the United States.”

“The industry is slowly going away,” Bright said. “It’s just a matter of time.”

Until then, Bahm will be on call for airport deliveries. He’s also available 24/7 to help new owners with their rescue dogs.

“When we first walked our dog on a leash, we had a hard time getting him to go to the bathroom,” said Hermosa Beach resident Emilio Pack, who adopted a 30-pound Jindo mix from DOVE Project.

“Any time we texted Joe, he responded within minutes.”

Bahm knows he can’t single-handedly stop the dog meat trade, but believes he can make a difference.