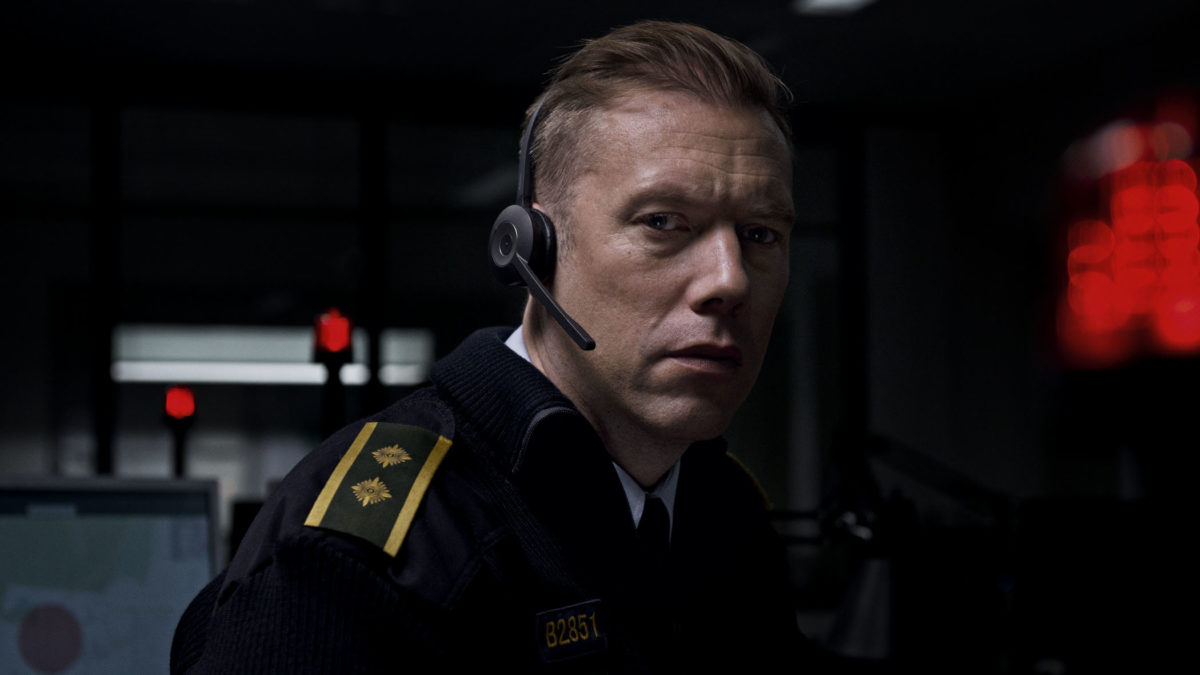 Detective Asger Holm’s annoyance can be read in his smirk. Assigned to desk duty in the emergency services division for some unknown transgression, he is reduced to fielding calls and redirecting them to dispatch. Clearly this is beneath his dignity and he lets the first couple of callers know it, hanging up on the first, and taking his sweet time in having aid dispatched to the second. His interaction with his co-workers is minimal; he doesn’t respect them, and they prefer to keep their distance. The chip on his shoulder is a two by four.

Then comes the call that changes everything. Iban, on the line, is very much in distress. Pretending that she is speaking with her daughter, she is able to communicate that she has been abducted and is terrified of dying. Asger is flying blind and about to hit a dead end. Although her personal information comes up on his screen, she can only hint at the direction they are taking but not at what kind of car she’s in or where they are going. Asger is able to deduce that she has been kidnapped by someone she knows.

Relaying this minimal information to emergency dispatch, they are unable to do anything unless they know more. What road are they taking? What kind of car? Asger, back on the line with Iban is able to have her indicate that she is in a white van going north on the freeway. It is the only information he has, and dispatch indicates that they will do their best. And they do, finding a light-colored van and pulling it over. But it’s not a white van; Iban isn’t in it; they’ve now completely lost the trail, if there was one to begin with. And, Iban isn’t the only person at risk here and Asger must try to find her little girl.

Saying more would reveal too much about what happens in this gut-wrenching, thriller with unexpected twists and turns. Nothing that happens in this film is expected; nothing is easy; no one is whom you’ve come to believe them to be.

Gustave Möller, directing from an outstanding script he co-wrote with Emil Nygaard Albertsen, defies all expectation. This is, without any argument, a top-notch thriller, but it is also an expert character study of a man, pushed to the wall, who discovers more about himself and honest emotion in an hour than he has in the forty plus years that he’s lived so far. The smirking Asger of the first few moments has all his understanding of human behavior, his own included, upended. The mask he has worn in life is, little by little, shed like a snake sheds its skin. 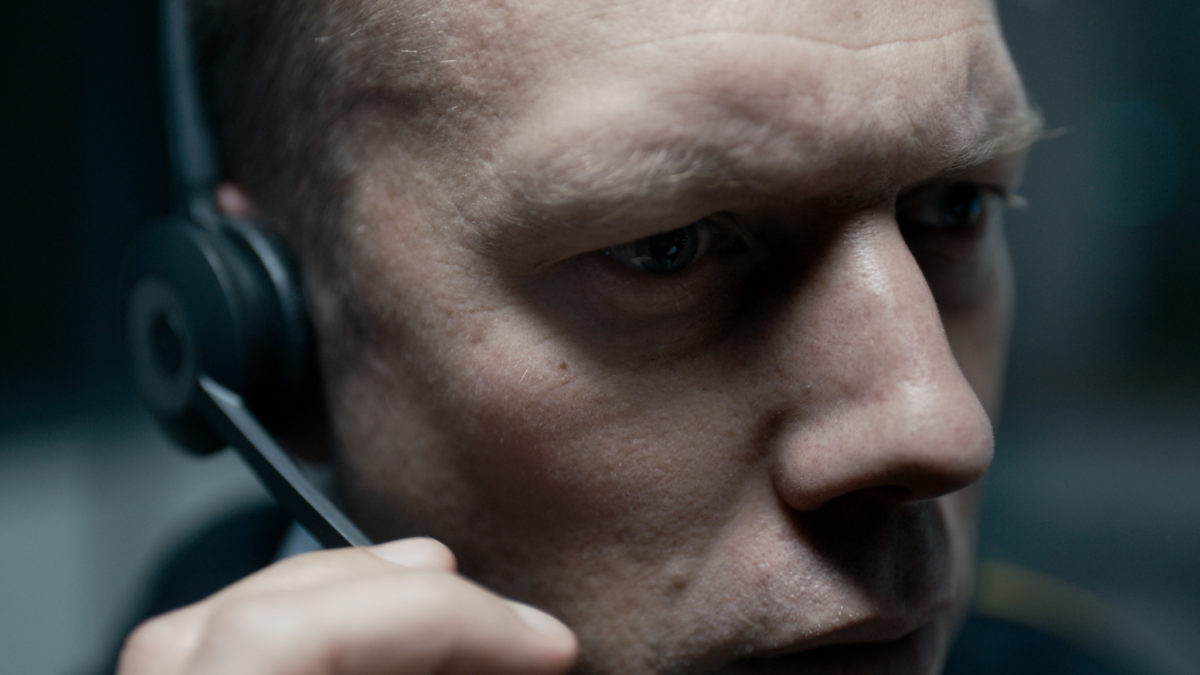 More remarkable, or perhaps only one of the remarkable aspects of this superb film, is that it takes place in real time. The first close-up of Asger responding to a call takes place near the end of his shift. He is anxious to go home and rest for he has a hearing in court the next day that will decide whether he will be released from the prison of phone duty. He’s annoyed, he’s tired, he wants to be anywhere but there. But then comes the call, and although his shift ends while Iban is still missing, he stays. He feels a responsibility.

Not only does this take place in real time, but it all takes place in one room, usually in just a very small area of that room, with other people as background noise. Real time, one room, one person. Jasper Spanning, the cinematographer, has created an almost monochromatic palate, one that focuses on the seemingly monotonously stoic face of Asger. But it’s not monochromatic and Asger is not monotonous, far to the contrary. The focus is tight on Asger throughout and Carla Luffe, the editor, keeps the momentum going. The theoretical antithesis of a visual medium, this is a film that relies on the auditory. There is no visible action; there is only one set; there is only one actor and several voices. And yet, this is an incredibly effective, thrilling, nerve-wracking visual experience. You’ll just have to judge for yourself but be forewarned, your stomach will tighten within the first five minutes and it will only get worse.

The filmic elements are thoroughly stellar, from the voice actors, the one set, the tight focus photography, the superb script, and the taut direction. But none of it works without the amazing performance of Jakob Cedergren, a much-lauded Danish actor but virtually unknown here. Much like Mark Rylance who effectively uses his eyes to convey all emotion, Cedergren’s subtle changes in eye movement and breathing transmit the gamut of sentiment and instinct as the kidnapping plays out on his phone. From arrogance to terror to vulnerability, Möller focuses only on him. No respite; nowhere to hid. Simply put, Cedergren is the best actor you’ve never seen, and one can hope that we will see more of him.

In Danish with Danish subtitles.