The Hermosa Beach St. Patrick’s Day that wasn’t and other coronavirus tales 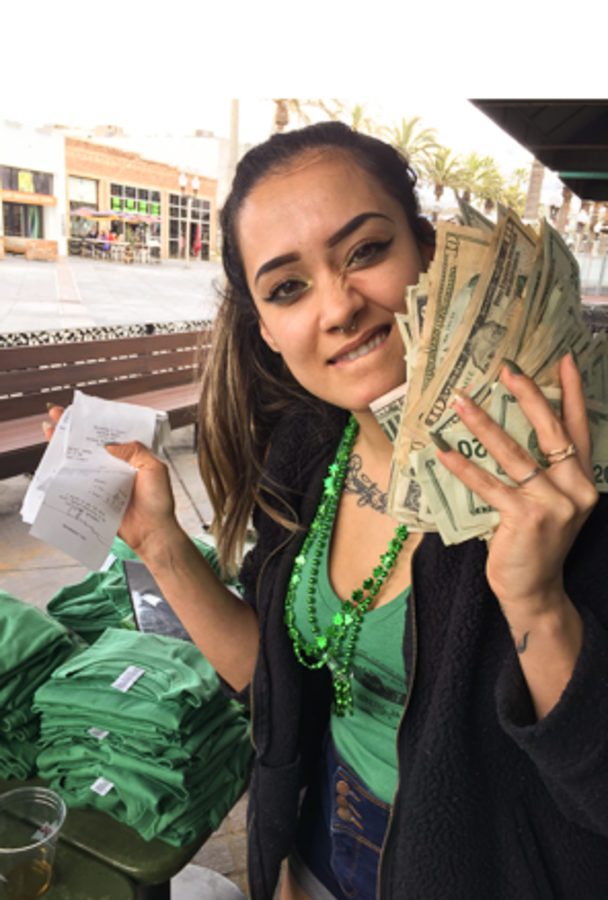 Henessey’s server Kayla with some of the green she collected from the sale of Hennessey”s 2020 St Patrick’s Day T-shirts. Photo courtesy of Hennessey’s

“To think two weeks ago I was worried about it raining on St. Patrick’s Day,” Paul Hennessey said while looking out from the empty patio in front of his namesake tavern on Hermosa’s Pier Plaza. It was Saint Patrick’s Day and it was raining, but he hardly noticed. He was too concerned about the kegs of beer stacked to the ceiling behind his downstairs and upstairs bars and commensurate stacks of corned beef sandwiches in his kitchen.

“Do you know the only thing worse than owning an Irish tavern on Saint Patrick’s Day when the government has ordered all the tavern’s closed? It’s owning 16 Irish taverns,” he said. Hennessey owns taverns in just about every beach town from Hermosa to San Juan Capistrano. Everyone of them had kegs stacked to the ceiling and stacks of corn beef sandwiches.

“I never thought I’d see the day when all the bars in Ireland and all the casinos in Las Vegas would be closed,” he added. That was the last one liner he could muster.

He told his Hermosa wait staff to leave the corned beef sandwiches on the patio tables for the people strolling past the Plaza’s closed stores and  restaurants. Then he called Harbor Distributing and convinced them to pick up the kegs they had delivered over the weekend.

Finally, because no one knows when the State’s “social distancing” directives will be lifted, Hennessey advised his nearly 1,000 employees to apply for unemployment.

Restaurants are allowed to remain open to sell food for take-out, but Hennessey did not think the effort would be worth the cost.

Ron Newman, like Hennessey is in his 70s and like Hennessey, got his start in Hermosa Beach in the ‘70s. His dad owned Newman’s Cameras at Pier and Hermosa Ave. Now he and his son Greg own Sharkeez, Palmilla and Tower 12 on Pier Plaza and eight other restaurants from Huntington Beach to Santa Barbara.

Their 13th location, a high end Mexican restaurant in Manhattan Beach to be called Esperanza, was scheduled to open this spring.

“Now, I’m thinking of slowing down construction,” Newman said from his condo in Maui, where he was on a work vacation when the dining-in ban went into effect. “It would be foolish to open a new restaurant now, not knowing when this dining-in ban will be lifted,” he said.

“The grocery stores can’t feed everyone and some people can’t cook so people need take-out,” he said.

He approved of the dining-in ban.

“We’ve got to get rid of it. We’ve got to work together for the common good,” he said. Then he added, “But it is a disaster. People are going to close and never reopen.”

Customers were thanking Rick Hankus Monday morning for keeping his coffee house Java Man on Upper Pier Avenue open for take-out. Like Hennessey and Newman, Hankus has weathered challenging times before. In the early ‘90s, the city nearly put him out of business when it closed Upper Pier for over a year for improvements. Then Starbucks opened a store down the street from Java Man and two stores up the street. 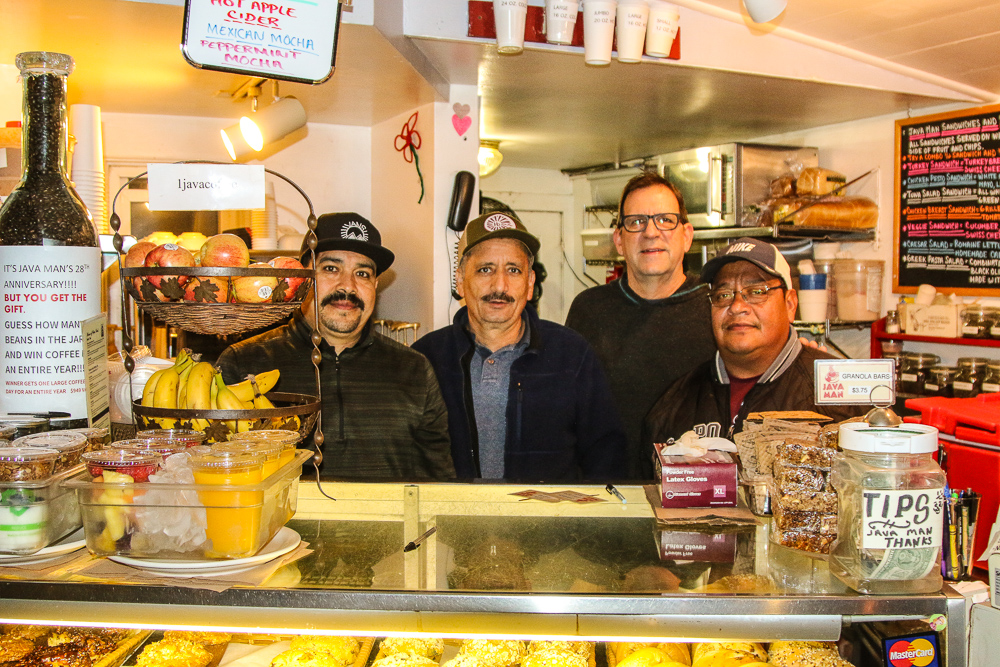 “Plan? I don’t have a plan. The diner was busy over the weekend with regulars who said they came in to show their support. I’m going out to dinner tonight to show my support. But who knows, it may be the last time,” he said.

Hankus closed Ocean Diner but his baker Roy Olague is continuing to bake for Java Man, which remains open for take out.

On Tuesday, it was still possible to buy a surfboard in Surf City. ET Surf , Spyder Surf, Becker Surf Pier Surf and Jack’s all remained open.

“We’re playing it by ear. We’re wiping down the phones, door knobs and countertops. Grocery stores have a lot more people than we ever have. Customers are saying they wanted to get out of the house and are glad we’re open,” ET Manager Daniel Del Castillo said.

Dive N’ Surf closed this week for the first time since its founding by diving pioneers Bill and Bob Meistrell in 1953.

“We’re trying to do our part to keep people safe. We’ll continue paying our employees as long as we’re able. But we can’t do that indefinitely,” Dive N’ Surf CEO Russ Lesser said.

A sign on the door advises divers who need air to call.

Brian and Colin Cooley own Wicked+ General Store and the women’s boutique Beach & Beverly next door on Pier Avenue in downtown Hermosa. Over the weekend they were allowing only one customer in their stores at a time.  On Tuesday, they closed both stores and encouraged customers to call or text purchases for curbside delivery. Initial results were good, with sales exceeding $1,000 on Monday. The big sellers, manager Amanda Browning said, were “comfy clothes for working at home and going outside for exercise.”

Mark Comon, owner with his dad Paul of Paul’s Photo on Hawthorne Boulevard in Torrance, posted a video at PaulsPhoto.com on how to take family portraits while sheltering in place.

“Pose your family in front of a window. Window light is very soft, Your portraits will look like Rembrandt,” he promised.

Though he closed his store to walk-ins, he is providing curbside service, free shipping and the one thing that distinguishes retailers from online sellers. He and his staff are available by phone to answer questions.

Grow owners Kathy and Barry Fisher came up with the idea of addressing social distancing by opening their Manhattan Beach market from 8 to 9 a.m. exclusively to people over 65 and pregnant women. The general public is allowed in the rest of the day. Gelson’s, their new rival across the street, quickly followed with the same policy.

Schedule it and they will cancel

Ken Seaton, owner of Hardline Entertainment in Hermosa Beach, had booked his bands through the summer across the U.S. and Canada. He booked Strung Out, Save Ferris and The Long Beach Dub Allstars for the BeachLife Festival in Redondo Beach in May. Canceled. Save Ferris was booked for a ska show next month in Vegas. Canceled. Local band Hoist the Colors was to play at the Queen Mary Monday afternoon, the Echo Monday night and at the Palladium on St. Patrick’s Day. Canceled. Canceled. Canceled. Strung Out was to headline the MMA show in Victorville next month and then tour Canada for three weeks. Canceled.

“Record contracts went away years ago because of streaming. So bands have been surviving by going on tour to sell their records. Now that’s gone.”

Washington Post reporter Bob Woodward was scheduled to speak to Distinguished Speaker Series subscribers at the Redondo Beach Performing Arts Center this week. Then the state issued its directive prohibiting gatherings of over 50 people.

“We got lucky with Woodward because we got word two weeks ago that the Washington Post was restricting non essential travel by its employees. So we rebooked him for June 18. But (former British Prime Minister) David Cameron is scheduled for May and we don’t know if travel restrictions will be lifted by then,” said DSS owner Kathy Winterhalder.

“Because we have five locations (Redondo, Beverly Hills, Thousand Oaks, Pasadena and Orange County) rescheduling is like a big puzzle. And 50-seat theaters don’t  do it for us,” Winterhalder said. “But we’ll make it work. Just like everyone else, we’re optimistic and hope subscribers will understand. We’re all in the same boat.” ER