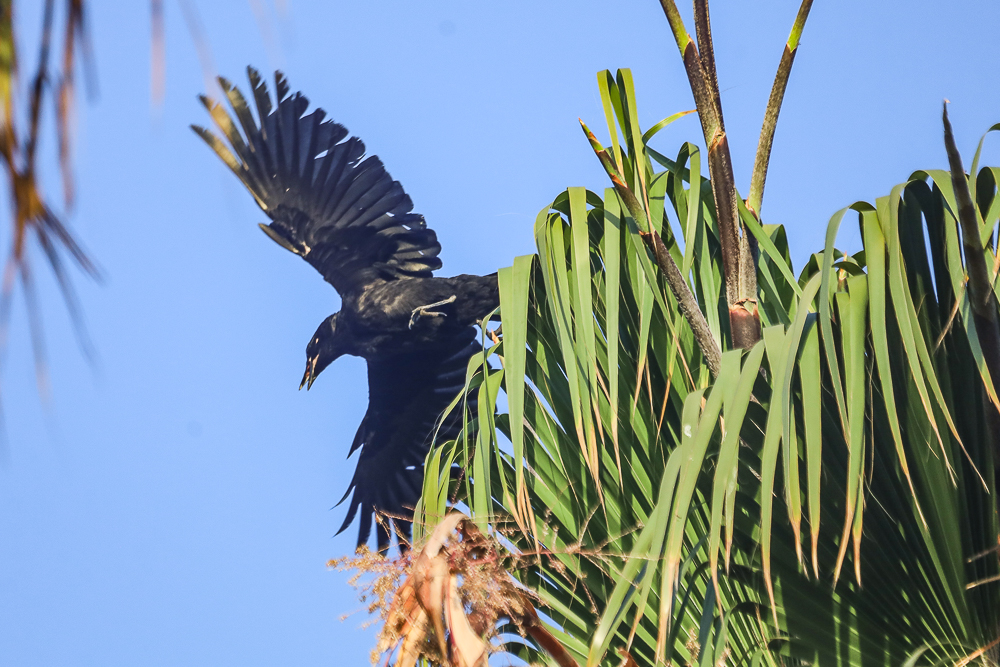 A crow eyes its prey from a palm in Noble Park. Photos by Ralph Doyle

Danielle Cohen had just opened her father Harold’s La Playita restaurant for breakfast, when a frightened man ran in from the street. He told her he was being chased by crows.

Cohen was not surprised. La Playita, on 14th Street, is next to Noble Park, home to an aggressive murder of crows who live in the park’s palm trees. (Murder is the ornithological term for a flock of crows.)

Cohen told the man a Noble Park crow hit her on the top of the head last summer.

“Fortunately, I had my hair in a bun. The bun saved me,” she said. 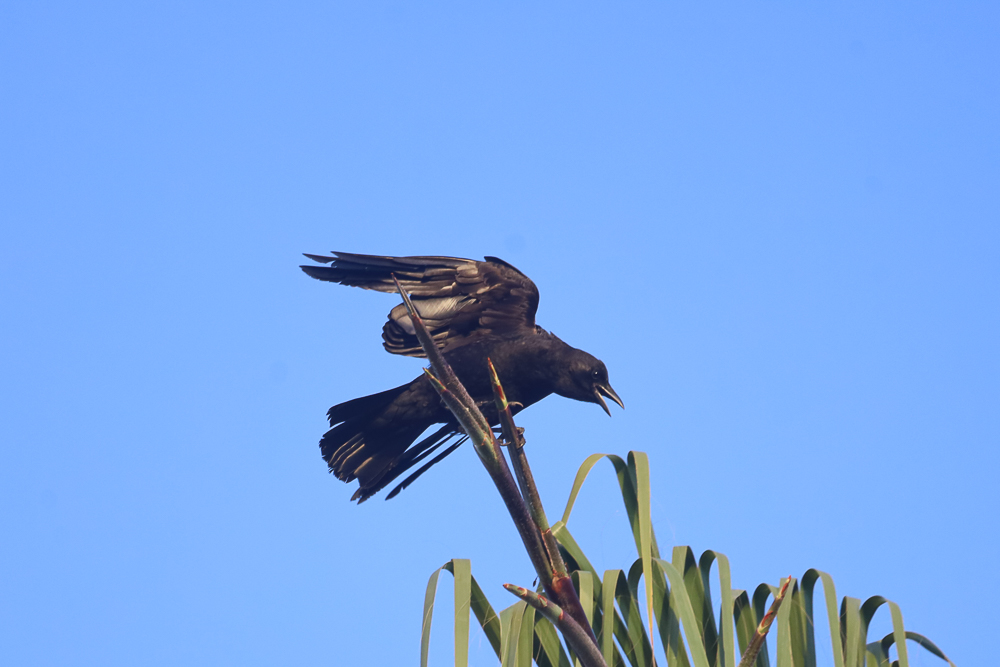 People struck by Noble Park crows say the birds attack silently from behind.

Noble Park crows appear particularly aggressive towards people walking dogs. The first time Patricia Harrison, who lives on a  nearby walk street, was hit by a park crow, she was standing with her shih tzu, Sam, under the bottle brush tree with the tire swing.

“I thought the kids shooting hoops in the alley missed the backboard,” she said.

More recently, while Sam was sniffing under another tree in the park, crows hit Harrison in the back of the head twice in rapid succession.

“Walking Sam in the park used to be relaxing. Now I avoid standing under the trees, and keep my eyes out for the crows,” she said.

Not all crow victims are dog walkers. 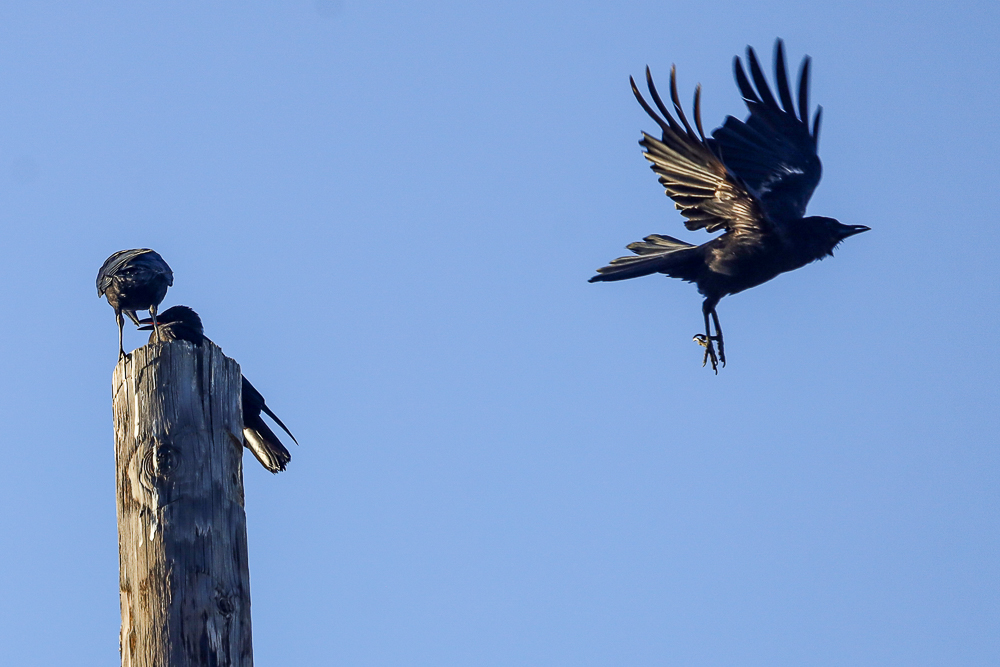 Crows frequently swoop down on Noble park from utility poles across the street.

“Two weeks ago, I heard a runner in the park yell, ‘[Expletive]. A crow just attacked my head.’ It freaked him out,” Harrison said.

Her husband was skeptical when she blamed a kink in her neck on the  crow attacks, until he was hit in the back of the head twice in one week, while walking their dog. He too described it as feeling like a loose basketball.

Crows can weigh up to five pounds and stand 1.5 feet tall

Noble Park crows don’t only target people. Last week, a murder “mobbed” a raccoon that had climbed a palm tree in Noble park. The crows have also mobbed Richter, a hawk belonging to falkoner James Andrade, who is hired by the Beach House Hotel across the street from the park to chase away pigeons and seagulls..

“Crows breed in May and June. I just heard my first baby crow this week,” the Manhattan tree section resident said.

“Crows are smart,” he noted. “They fashion tools and they remember faces. Because they’re omnivorous and people are slobs, parks are the perfect habitat for them.”

He sells a solution for keeping crows away. It’s a feather-covered styrofoam carving in the shape of a dead crow. He said crows will gather around it, and then, sensing danger, flee the area. ER 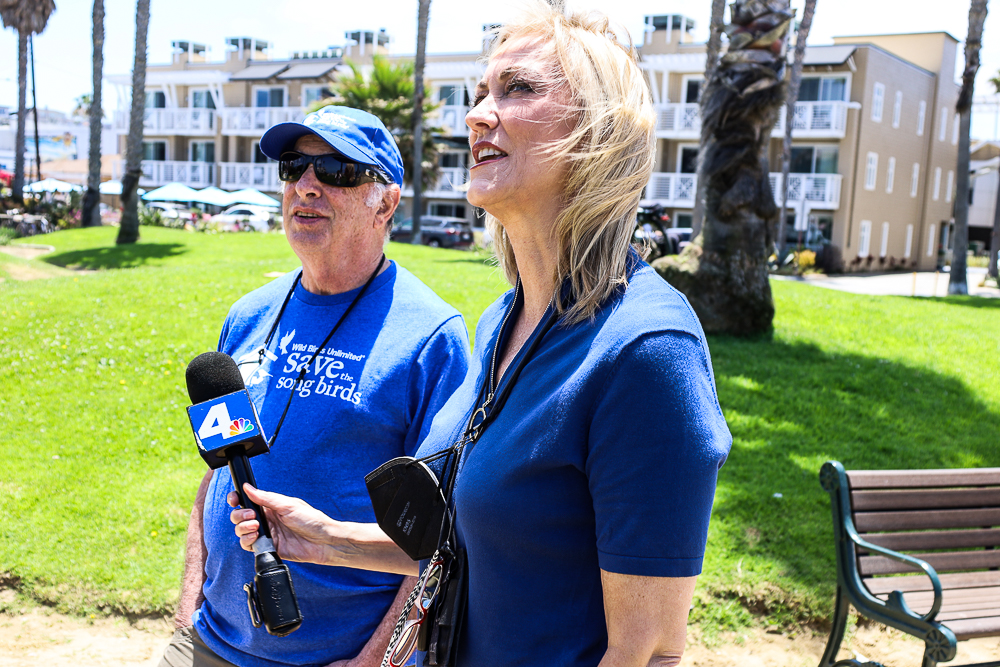