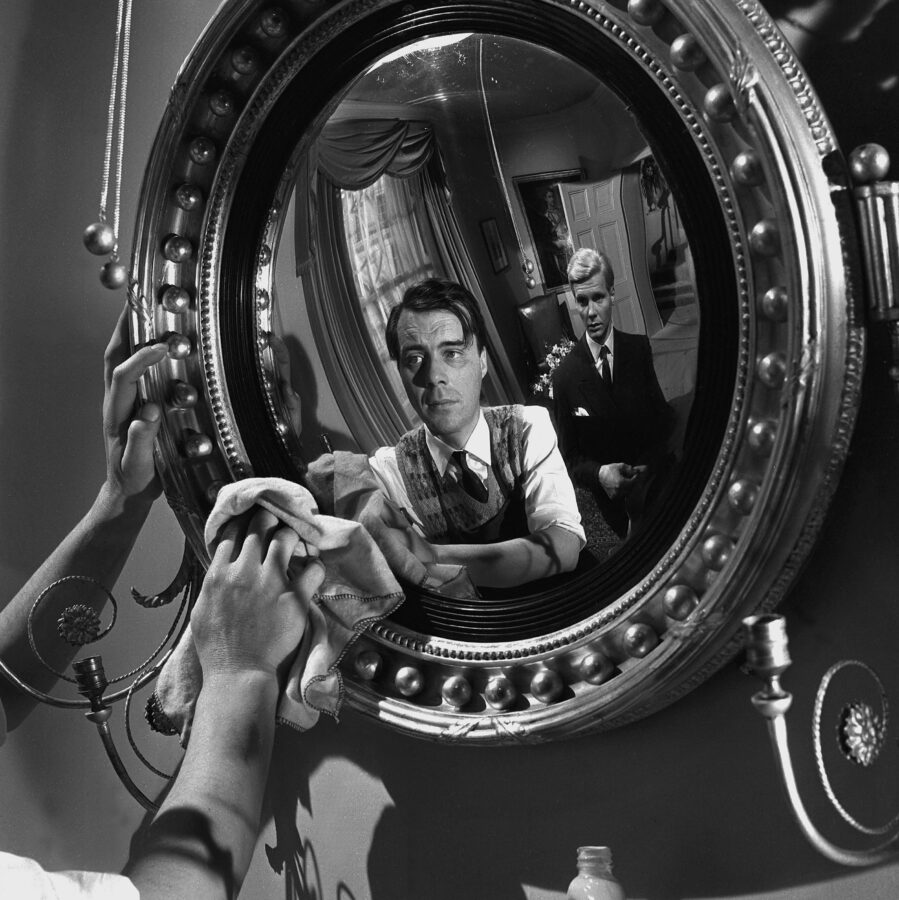 Dirk Bogarde as Barrett and James Fox as Tony in "The Servant." Photo courtesy of Rialto Pictures. 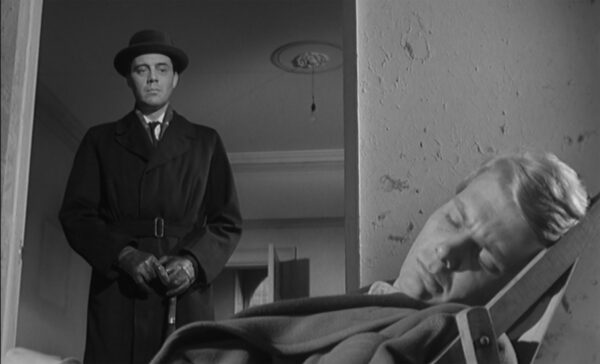 Dirk Bogarde as Barrett and James Fox as Tony in “The Servant.” Photo courtesy of Rialto Pictures.

Joseph Losey’s 1963 masterpiece has been given the full Rialto Pictures 4K restoration treatment and what a glorious way to see this classic. A chillingly homoerotic film centered on a subtle story of class warfare that was influenced by and an influence on the Buñuel catalog of the 60s and 70s, including “Diary of a Chambermaid” and “Belle du Jour.” And on that decadent theme of the blind excesses of the rich, Losey made a horror film for the ages, one that was reflected most recently in Boon Jonn Ho’s Oscar winning “Parasite.”

Tony, blondly beautiful, has purchased a dilapidated townhouse in a chic part of the London. In the market for a manservant, he is immediately struck by Barrett who has worked for all the right people, or so he says. The very embodiment of Noblesse Oblige, the patronizing Tony announces “I’m just back from Africa” and you know everything you need to know about him, or at least who he thinks he is. Tony casts a furtive eye on the darkly handsome Barrett who exudes an undercurrent of seedy obsequiousness. Look carefully or you’ll miss the electric charge that passes between them.

He needs a general factotum to cook and clean and help him get the repairs to the house done. For a young man who is waiting to join colleagues on their South American redevelopment project, he seems singularly incapable. 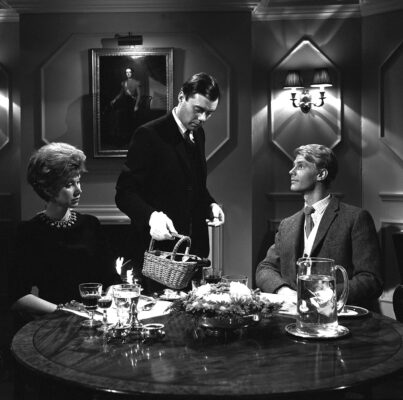 Wendy Craig as Susan, Dirk Bogarde as Barrett, and James Fox as Tony in “The Servant.” Photo courtesy of Rialto Pictures.

The signs of class distinction are everywhere with a trickle down of palpable disdain from master to servant to the laborers hired to rebuild the house. Tony is entranced by Barrett and his efficiently accommodating nature. Tony’s fiancée Susan is less so. Losey has intermingled her classism with a feeling of disturbance in their universe. Astutely, he has made her so unsympathetic in her snobbism that her unease with how he has burrowed his way into Tony’s life is effectively buried.

Barrett has more in store for his blind, hapless target. Having become indispensable and far too busy to attend to everything, he convinces Tony they need a maid. Vera, his sister, is available and they should give her a try. Gracelessly eating a candy bar in the taxi from the train station, it is obvious from Barrett’s and Vera’s body language that they are anything but siblings. With Susan’s disdain and distrust growing, Barrett has brought out his secret weapon. Vera is as much bomb as bombshell and Tony’s libido is soon ticking off the moments until explosion.

The indolent Tony is no match for Barrett the sociopath. When it looks like Tony may have escaped his clutches, he is reeled back in. It is a classic case of “Fool me once, shame on you. Fool me twice, shame on me.” With Susan sidelined, the roles gradually begin to reverse. Brilliantly, they go from master/servant to a bickering lower class married couple replete with sexual innuendo to dependent servant and new master. As Barrett chastises Tony, “I am a gentleman’s gentleman and you’re no gentleman.” 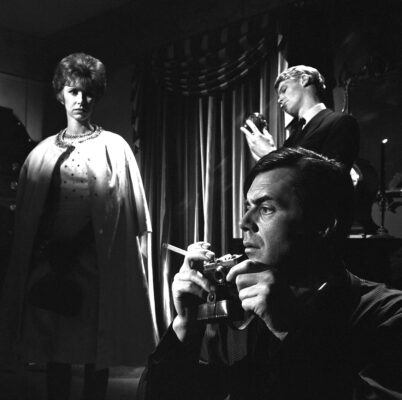 Wendy Craig as Susan, Dirk Bogarde as Barrett, and James Fox as Tony in “The Servant.” Photo courtesy of Rialto Pictures.

Losey has given us psychological geopolitical warfare highlighting the uselessness of the ruling class. It is the French Revolution carried out one aristocrat at a time.

The acting in this drama is peerless. Wendy Craig as Susan intermingles class disdain with genuine fear effortlessly. Her voice drips with scorn and her eyes reveal terror, both for her lover, her way of life, and the dangers imposed by Barrett.That her insults roll off his back is disorienting. That Tony might choose him over her is horrifying.

Sarah Miles had a market on feigned innocence disguising tartish zeal. Her eyes are wide, her lips are full, her voice breathy, the body voluptuous in its sexual promise, and her greed transcends it all. She is whatever you want her to be or seem, and that is her gift both as a character and an actress. James Fox, in the first of what would be many important roles, could not have been more perfect than if it had been written specifically for him. And it wasn’t. His entrance on screen, beautiful, fair-haired and gliding through life, announces that he has never done a hard day’s work in his life. He is to the manor-born and contents himself with believing that he treats everyone equally. We know immediately who he is and so does Barrett. As Tony, he will win several battles but you instinctively know by his manners, his actions, his blankness that he will lose the war. It is impossible to think of anyone else in that role as he slides from self confidence to dependence to abject degradation.

Dirk Bogarde, as Barrett, was fearless. A matinee idol and leading man, the role of the Machiavellian manservant was a major departure from the stiff upper lip honorable characters that he had played since his career took off in the early 1950s. His eyes conveyed everything you needed to know about this sociopath. As he travels the road from upstanding, groomed and polished gentleman, to disheveled, maniacal schemer and back again, he is chilling and believable and no less a monster than Dracula but more inconspicuous because you don’t see him coming for your soul until it’s too late. Bogarde’s career was full of interesting and complex characters, played effortlessly; but this, “Death in Venice” notwithstanding, was his greatest and most memorable role.

“The Servant” was the first screenplay written by Harold Pinter, already a well known playwright who would later win the Nobel Prize for literature. The language is tart, incisive, and sparse. One thing to be noted in this bitter, cynical work is the sparsity of dialogue. Pinter set up the drama in the spaces between the words and it adds enormously to the character interactions. His style also emphasizes the skill of the actors because they must use his words and silences together to create an atmosphere. 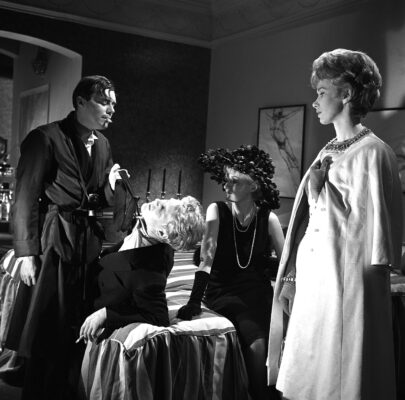 Dirk Bogarde as Barrett, and James Fox as Tony, and Wendy Craig as Susan in “The Servant.” Photo courtesy of Rialto Pictures.

Douglas Slocombe, the director of photography, paints in black and white as though his palette was infinite. The camera angles he chooses continually throw the viewer off balance and when he shoots a scene reflected in a mirror, the effect is dizzying. His career in the U.S. and Britain included the Alec Guinness Ealing comedies, “Kind Hearts and Coronets” and “The Lavender Hill Mob,” as well as the “Indiana Jones” trilogy, and “The Lion in Winter.” Whether filming in color or black and white, his photography was embedded enough to become a character in and of itself.

Director Joseph Losey, who made a few notable but not very remarkable films in his native America, exiled himself to England in the early 50s before being summoned by the House Un-American Activities Committee (HUAC). A Communist, he had been named. He continued his career but it was not until 1960 that he achieved significance. “The Servant” was a major breakthrough and it brought him back together with Bogarde, with whom he had worked in 1954. It also was the first of three films he would make with Pinter (“The Servant,” “Accident,” and “The Go-Between.”) He would also collaborate with Bogarde several more times. Not only did he extract great, subtle, edgy reactions from his actors, but his eye for detail and camera angles was superb. Establishing character using mirrors to underscore the imbalances within the drama was just part of what he brought to the scene. The undercurrent of homoeroticism was in view but so subtle at times that the viewer will wonder why there seems to be an uncomfortable, unspoken sexuality present.

“The Servant” is a remarkable feat of storytelling, a shot over the bow of class structure, all the more remarkable because there are no sympathetic characters. It is a horror story that will shut you in a luxuriously padded room and nail the door shut. Like Tony you will scream to be let out and be powerless to do so. The monsters are them; the monsters are us. If you have seen this film in the past, see it again. If you have never seen this movie, run, don’t walk, to see it. Be afraid. Be very afraid.