“The Test and the Art of Thinking” – In Conflict [MOVIE REVIEW] 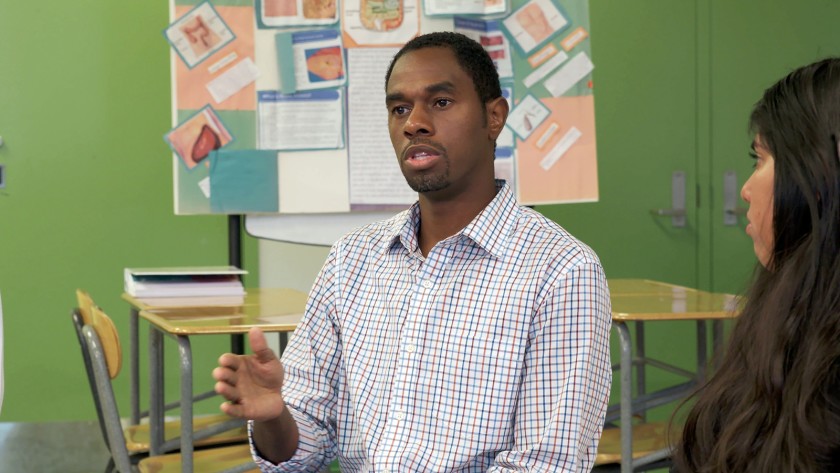 Kory McBride helps students with the college admissions process in the documentary “The Test & the Art of Thinking.” Photo courtesy of Canobie Films Abramorama.

“The Test and the Art of Thinking,” a probing documentary by Michael Arlen Davis, explores the complicated history of the SAT and ACT, tests that still bring shivers to the souls long after they were taken (and mine were taken a long, long, time ago in a galaxy far away).

Although proponents of the SAT, the focus of the film, exclaim to the high heavens that it was never intended to be an IQ test but instead a measure of qualitative thinking, others would argue to the contrary. Originally devised in 1926 by Carl Brigham of Princeton to level the so-called playing field and measure raw intellectual ability and open colleges to those who were unable to attend the elite prep schools that were feeders to the Ivys, it was just another form of IQ test that fed into the Eugenics thinking of the day. Eugenics was a field that expounded on the racial superiority of Nordics and pointed the way toward eliminating the genetic traits of the inferior races. No doubt Brigham believed his test would find those superior beings whose genetic intellectual superiority should be identified. That the SAT is biased in terms of race, ethnicity, and cultural differences was built into it from the beginning. It is significant to note that Brigham eventually disavowed Eugenics and his research into it.

Originally the test was used almost exclusively at the elite Eastern schools but following the war and the advent of the G.I. Bill, the University of California decided to demand the SAT for admissions to show that they were academically competitive with the Ivys. From there, its usage spread exponentially.

And as the all importance of this test increased, a new business arose – the test preparation industry, promising subscribers an increase in test scores, often with a money-back guarantee. These expensive tutoring organizations recognized that there was a trick to the test taking as many of the questions were deliberately vague and confusing. Their goal was to guide their students through the forest of confusion and make better guesses. Knowledge was not the goal; stepping around a mine field of tricks and traps was. This was the very embodiment of teaching to the test.

Several tutors are followed as they reveal their techniques with students approaching the test. College consultants are interviewed, including one who guarantees that he can get students into the schools of their dreams, after he has pared those dreams down to size. He proudly stated that he once received a million dollars for his efforts on the part of one student. After the recent college admission scandals, one should take a closer look at his methods.

Many students are interviewed about their experiences with the test and their various tutors and, for the most part, they and their parents were satisfied with the results.

Most enlightening were the interviews and clips of Richard Atkinson, former president of the University of California system. In 2001 he gave a speech in which he expounded on how the test had compromised the educational system and was not a measure of anything akin to readiness for or success in college. He recommended that schools disconnect; that they no longer use this as a defining measure of school admission. At the time, there were many schools inclined to follow but they came up against another, more insidious wall – the U.S. News and World Report College Rankings. SAT scores of admitted freshman is a heavily weighted marker on this scale and colleges and universities continue to report the scores in an effort to show how elite they are. This marker alone makes it difficult for schools to make the test optional for admission.

The juggernaut that is the College Board, the non-profit that controls SAT and Advanced Placement Testing, put immense pressure on member schools, so Atkinson’s report in 2001 had little effect. Over the years, the College Board has released what they considered newer and better tests trying to identify and plug the loopholes found by the tutoring organizations.

Academics have performed all sorts of metrics over the grading of the exams. Most humorously is the report by one professor who noted that with the writing portion, the longer the essay, the higher the score. He illustrated by reading an essay that had gotten a near-perfect score. It was well constructed and very long. Unfortunately all of the information contained in it was wrong, deliberately and obviously so. This passage is laugh-out-loud.

More importantly, however, are two issues that are raised. One is that schools are now teaching to a test that does not reflect learning or knowledge or the accepted curriculum. Secondly, and most significantly, the SAT adds to the increasing gap between those who can afford to be tutored to the test, which also depends on the kind of tutoring, and those who cannot afford the extra-curricular help. Given that the SAT score is also a measure for administering financial aid, the poor will continue to be at a disadvantage both for college admission and financial aid.

As of 2020 there are a number of important colleges and universities that have gone test-optional or test flexible (students may choose one of a number of standardized test options), or test blind, such as the University of California system, where SAT/ACT scores are not considered for admission.

There are other markers for success and the more schools that begin to push back, the better it will be for students, especially the underserved, everywhere. Surely there are better assessment tools that can be used that don’t depend on expensive courses that create further divides in opportunity. The University of California is in the process of creating their own standardized admissions test. Many schools rely more heavily on high school grades than in the past, as well as essays, teacher recommendations, and assessment of classes taken during the course of study. As in the case of test-flexible schools, results of AP exams and/or SAT Subject Test scores reflect academic performance and knowledge more than the SAT or ACT.

Once you stop shaking from your own trip down bad memory lane, you’ll enjoy the questions and problems Davis raises. The interviews and experts are outstanding and truly thought-provoking.

Opening on digital streaming platforms on November 17 and through Watch @ Home on November 20.