“Three Christs” – Too Many [MOVIE REVIEW] 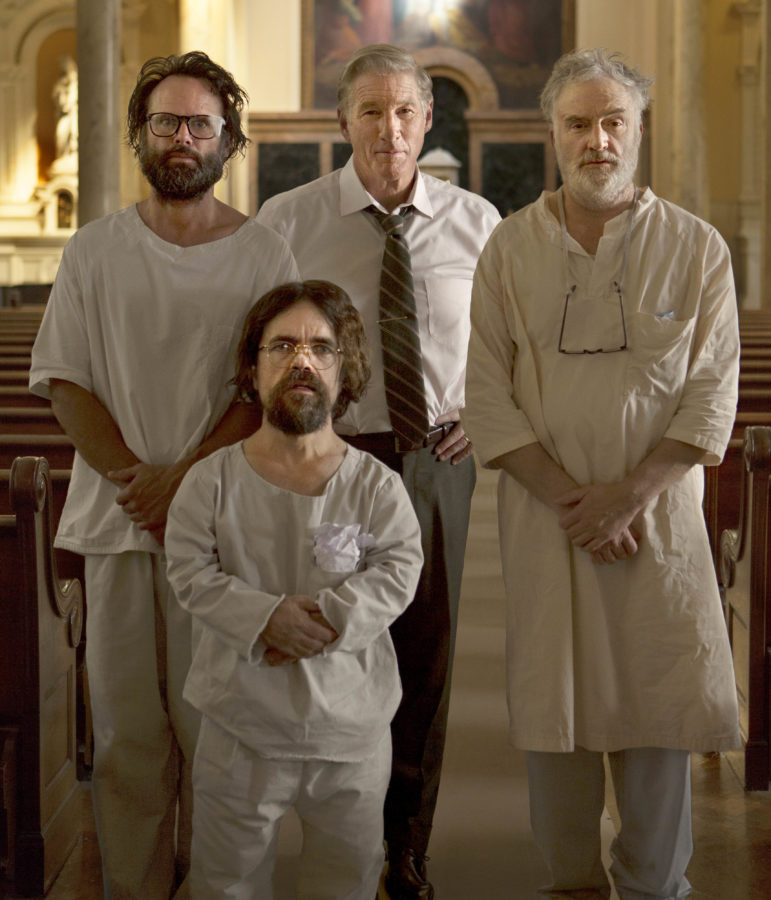 Like Mary McCarthy’s famous quote about Lillian Hellman: “Every word she writes is a lie, including ‘and’ and ‘the,’” “Three Christs,” a film claiming to be based on fact is as manipulative and dishonest as the study it allegedly recounts. Instead of opening with “Based on actual events,” it should say “Three Christs:” based on actual events that have been completely and totally fictionalized.

Written by Jon Avnet and Eric Nazarian based on the book The Three Christs of Ypsilanti by Milton Rokeach and directed by Avnet, “Three Christs” tells the story of an experiment on identity devised by psychiatrist Alan Stone (Richard Gere) in 1959.

Stone, discovering that there were three paranoid schizophrenic patients each claiming to be Christ, posited that he might be able to shock them into reality if he brought all three together. An important part of this experiment was to shield them from the allegedly preferred psychiatric treatments of the hospital, electro-shock, and use a strictly “talking cure” approach. Ideally, he believed this scenario would cause one or more of them to yield his belief structure to the others. He dreams of a day when all three will sit down together to play cards. We see the card game but what we don’t see is the violent confrontation of all three Christs as they meet for the first time, something that would have given more verve and a dash of dramatic reality to the otherwise bland scenes with the patients.

Stone has the powerful, if reluctant backing of a mentor, Dr. Rogers (Stephen Root), but has no friend in the chief of staff, Dr. Orbus (Kevin Pollak). In the simplistic belief that every story needs a villain, Avnet and Nazarian have given that role to Dr. Orbus, painting him superficially as a petty bureaucrat who uses electro-shock therapy as the go-to expedient choice to keep the patients under control. This is a complex issue all the way around. I have no idea if the “real” Dr. Orbus was as much an unfeeling, glory-hungry lout as the one portrayed by Pollack, but the situation was clearly much more complex in that Orbus was the administrator of a 4,000-patient hospital, many of whom were violent and barely treatable with the methods available at the time.

The opening chyron is also misleading as it lists these treatments as prefrontal lobotomy, insulin-induced coma, antipsychotic drugs, and electro-shock therapy. By 1959, the initial two therapies were vastly out of favor and rarely, if ever, done; the treatments of choice were antipsychotic drugs and electro-shock therapy as a last resort. Treatment for schizophrenia hasn’t changed much but now there are far fewer institutions available to the mentally ill, Ypsilanti having been closed in 1991.

The patients, Joseph (Peter Dinklage) who believes that not only is he Christ but also that he is from England (he is not); Leon (Walton Goggins), a younger, sexier, more threatening Christ-figure; and Clyde (Bradley Whitford) who proclaims himself Christ not of Nazareth. Interestingly, the names of the three Jesus figures, unlike everyone else in the film, were the names of the actual patients. In this case the names of the patients were not changed to protect the innocents. 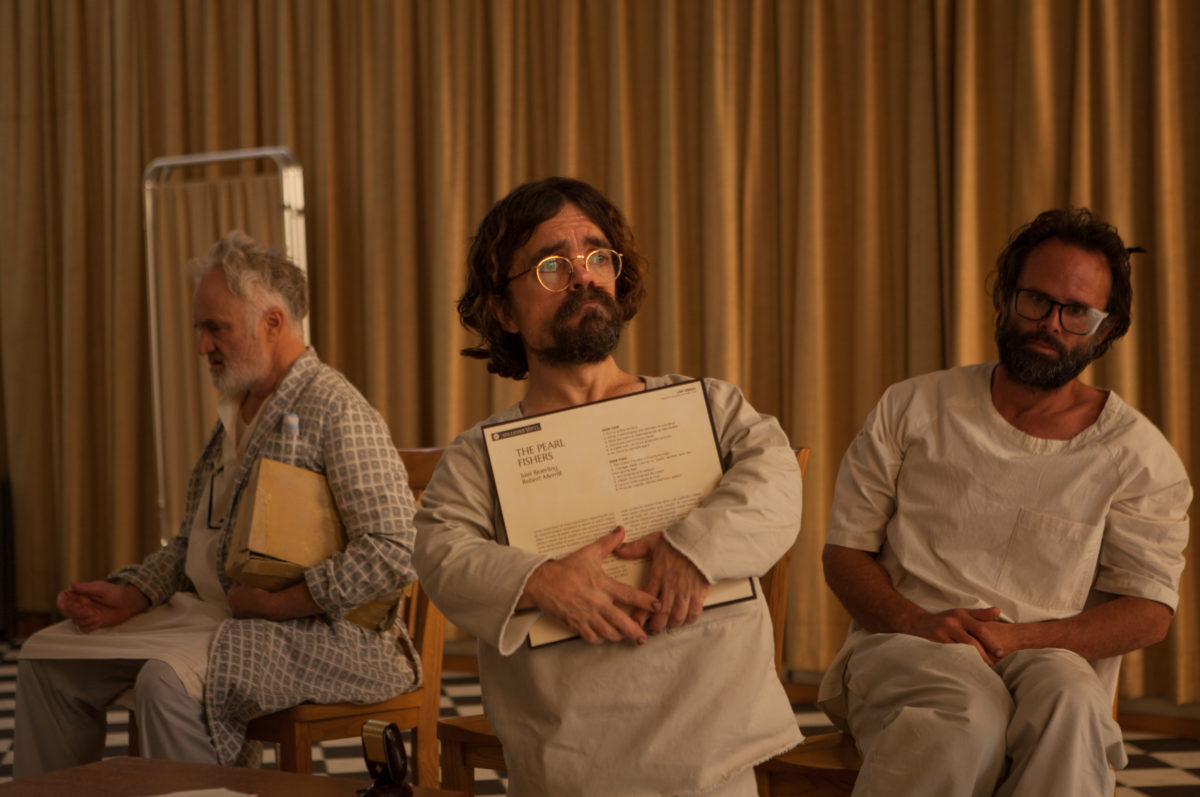 Briefly, the saintly, patient Dr. Stone makes headway with his patients until the evil Dr. Orbus inserts himself into the process and things rapidly go to hell.

This brings us back to manipulation. Dr. Rokeach, the actual scientist who devised the experiment, used highly questionable techniques, techniques that his actual graduate assistants complained about at the time and which he himself disavowed many years later, stating that the only thing he cured was his own “godlike delusion that I could manipulate them out of their beliefs.” Going further, in the afterword to his 1984 edition of the book, he stated, “I really had no right, even in the name of science, to play God and interfere round the clock with their daily lives.”

Dr. Rokeach was not a psychiatrist which necessitates an MD. He had a Ph.D. in social psychology from Berkley. He was expert at documenting behavior but not necessarily treating it. Obviously for dramatic (and manipulative) reasons, the writers made Stone a psychiatrist to make him an equal in diagnosis and treatment to the actual physicians and psychiatrists working with the mentally ill population.

Again, obviously for dramatic effect, Stone’s backstory, as he confesses it to patient Leon in order to draw closer and find common ground, that he was a Jewish child smuggled out of Germany to England by his parents, both of whom died in the Holocaust, eventually making his way to Brooklyn is certainly a heart-tugger. The true story of Milton Rokeach was that he and his parents, Polish Jews, emigrated to the United States where he grew up in Brooklyn.

The true story would have been dramatic enough in itself, but it would have been a different story – that of a good-hearted, naïve young man (much younger and less experienced than the man played by Gere) who learns the limitations of social psychological theory when addressing an incurable population. Instead, like the character of Stone with his patients, Avnet and Nazarian have chosen to manipulate the audience into a false scenario and sense of outrage. Later in his academic career, Rokeach recanted his methods. Even the final chyron is a half truth: “Despite its initial criticism, the American Psychological Association honored the study’s author with its prestigious Kurt Lewin award.” The award was for work he did later in his career on value systems and identity.

As if the story problems weren’t enough, Avnet as both writer and director has created characters that barely scratch the surface in terms of depth. Poor Juliana Margulies who is given very little to work with finds some interesting facets to her character as the supportive wife, although her scene as drunken harridan seems to come out of nowhere. Charlotte Hope as Becky the assistant has a soulful look that is useful, but our interest usually lies elsewhere. Of the Christs, Dinklage was given the most to work with and the audience is more invested in him than the others, although Whitford and Goggins do some fine work. If not for Gere, however, the film would be unwatchable. His naturalistic style lends a much-needed base of reality and empathy. Despite the odds, he finds a way to dig into this character and make him believable.

Opening Friday, January 10 at the Laemmle Monica and on VOD.