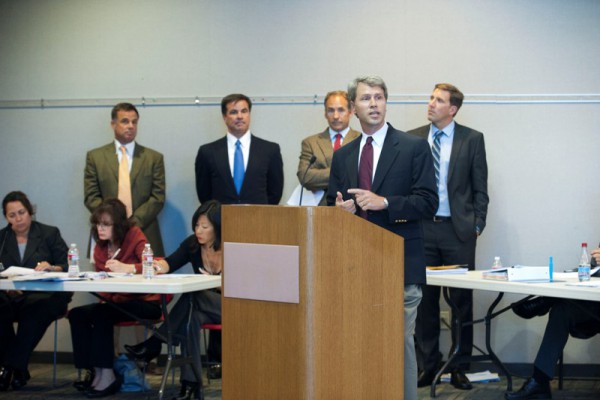 Matt Walker, executive vice president of Lowe Enterprises, talks to the city council about his company's vision for the waterfront. Photo 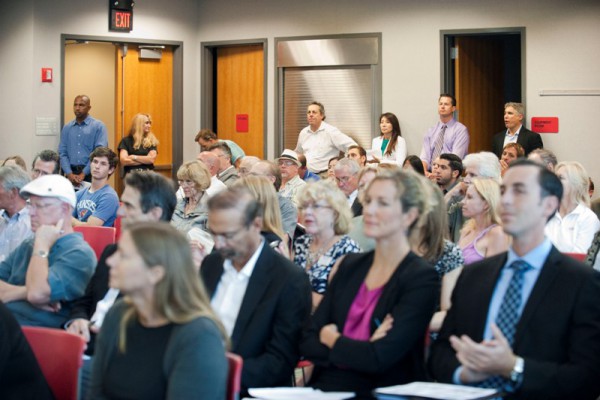 Redondo Beach City Council members and residents were wooed by three developers vying for the opportunity to redevelop 15 acres of the Redondo Beach Pier and Marina during a five-hour meeting last Thursday.

The developers, CenterCal Properties, LLC from El Segundo, Pacifica Companies from San Diego, and L.A-based Lowe Enterprises with the Ruth Group each presented their vision for what the waterfront could look like if their companies were allowed the opportunity to spearhead the project.

“It would really be an honor to work with your community to create and execute a vision that’s worthy of the site,” said Fred Bruning, CEO of CenterCal properties. “There’s tens of millions of buildings in California, but there are very few remarkable places. I think somehow we have a lack of center in our communities… we [CenterCal] focus on projects that can create a sense of place because we’ve come to a conclusion that the lack of place is something that people are striving for… whatever’s done with the 15 acres has to be part of a greater community, you want it to be something that will honor the entire South Bay.” 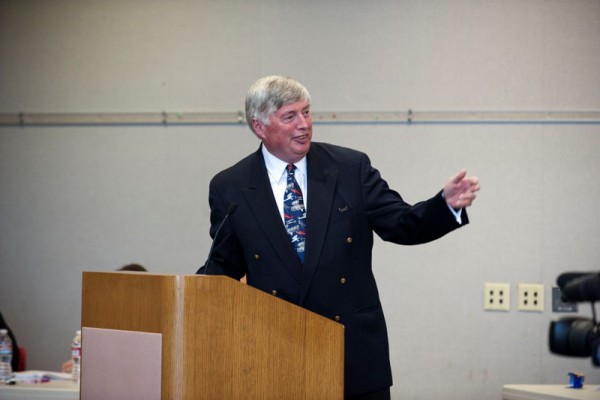 A point all developers made during their vision presentations was that their designs were not absolute, only ideas, at this point.

“You have a sacred piece of land,” Bruning said. “You have something that can’t be replicated and really is unique. It’s something that’s needed investment for many years and I think it’s time for reinvestment and creating an even more special place that’s open to the public and also takes into account the needs of the people living nearby.”

Bruning said that CenterCal’s proposal mainly focuses on retail because that would be the glue that would hold the project together, and that adding a boutique hotel, high-end dinner-and-a-movie theatre would be a unique addition, along with a market hall modeled after the European promenades featuring local seafood and specialty foods.

“Our projects are successful,” said Bruning. “They’re full and the tenants are doing well. I think it’s because we build environments that resonate with the communities.”

Council member Matt Kilroy was interested in how they would merge their project with public amenities, like the Seaside Lagoon. Bruning said they would honor those projects and integrate artwork and additional commercial amenities. He said he envisions a place where residents eat, play and shop.

City member Steve Diels was concerned about CenterCal’s ability to integrate with the existing waterfront environment. Bruning said CenterCal would engage design experts and the community – particularly the boating community – to arrive at optimal solutions that would enhance what already exists in the area and potentially add bike paths to ease public access to the water.

Pacifica Companies based their project on areas like Quincy Market in Boston, Pike Place Market in Seattle, Pier 39 in San Francisco and Bondi Beach in Sydney. The most controversial aspect of their vision was the use of the Seaside Lagoon, based on their inspiration from a saltwater pool at a hotel in Bondi Beach, Australia. They referred to Seaside Lagoon as a “gem” and also focused on centralizing parking to encourage pier visitors to fan-out and walk to the different locations. 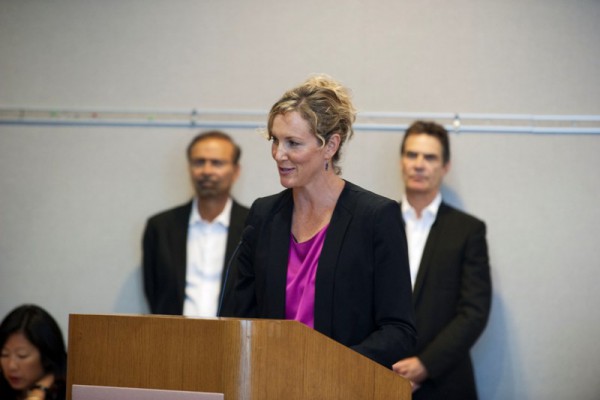 Allison Rolfe, the director of planning for Pacifica Companies, talks to the council on Thursday. Photo

The privately-owned, self funded Pacifica Companies specializes in beachfront projects. Chairman Ash Israni said the company is excited about using its expertise to make the Redondo Beach property a successful public input-based project that works within the waterfront regulations to benefit the needs of the community.

The Pacifica plan includes a combination of local and nationally recognized restaurants, boutiques, and two hotels.

Allison Rolfe, Pacifica’s director of planning, said she is currently managing three projects similar to the Redondo Beach project. She stressed the importance of community input as an important part of the company’s developments. While at the podium, she showed a video of a Chula Vista coastal commission meeting at which everybody expressed their gratitude about working with Pacifica Companies.

“I truly don’t know what to say and I know I should be professional, but the thing is I love everybody here and I’m just gushing with love,” Rolfe said in the video. “Thank you very much, good job,” a commissioner said later on, “We’ve had tears in this room before, but they’re usually not like that, so thank you.” 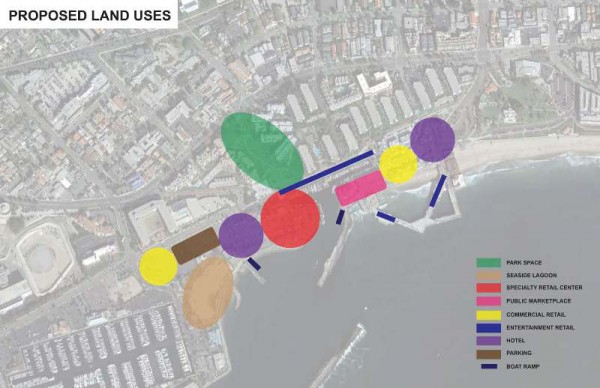 “Coastal commission meetings don’t usually go like that, and all of ours have,” said Rolfe after the video finished. “We take great pride in that.”

Bill Brand asked if having two hotels is critical, since multiple hotels already exist in the area. Israni said that the plans are preliminary and flexible, and the conceptualized hotels in any case are smaller than most. He added that a boat ramp is in the plans; they just need public input as to where and when. He also said specialty boutique shops that are unique to the Redondo waterfront could do very well with visitors and locals alike.

Lowe Enterprises and the Ruth Group

The final presentation of the night from Lowe Enterprises and the Ruth Group, the developers of Terranea Resort and Spa in Palos Verdes, looked visually ominous at its outset. The five representatives came to the front of the room and stood with their arms crossed against the wall. Councilmember Steve Aspel remarked that it looked like they were standing in a police lineup.

Matt Walker, executive vice president of Lowe Enterprises, talks to the city council about his company’s vision for the waterfront. Photo

Lowe Enterprises presented a markedly different vision than the other developers. They argued that Redondo Beach could have a more vibrant tourism industry if the pier were truly revitalized, due to the town’s proximity to the Los Angeles Airport. They said that their other venture, Terranea, hosts many guests because of that proximity, and Redondo Beach could easily take advantage of that same clientele.

“We are also vertically integrated,” said Matt Walker, executive vice president of Lowe Enterprises. “That means we plan, we entitle, we develop and we operate many different types of real estate. We are well versed in working with city governments and have done private-public partnerships. We understand the complexity; we understand what it takes to get things done.”

He also said that their ability to integrate both hospitality and retail is unique in creating authentic projects that blend with the community.

“Clearly it’s a unique to have this much land all in one place on the waterfront,” said Walker. “The fact that this is a working marina and pier is great… it creates a vitality and an ongoing 24/7/365 activity, which we think helps add vibrancy. There are already a lot of great restaurants on the pier, we want to integrate them and find places for them in this project.”

The most important parts of the project for Walker included a marketplace, boardwalk and an active resort and beach club area with a resort hotel and conference center. They also suggested moving parking outside the development and enhancing the bikeability and walkability of the area.

“It’s really [about] tying all this together and having one grand experience,” said Bob Ruth. “We want to create an area where you can bring friends and family and you can say, ‘Come down see it, it’s special. It’s mine, it’s my backyard.’ That’s the goal of the project here.” 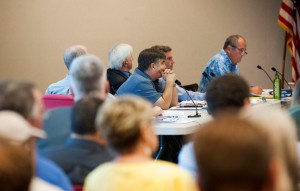 City council members listen to the developers during the five hour meeting on Thursday. Photo

Aspel made the same point throughout the evening.

“We want to make sure you know who they are [the existing businesses], whoever’s picked to do this project, you have to work with them,” said Aspel. “We don’t want to throw them out… They’ve been loyal to the pier for a long time.”

Kilroy expressed interest in potentially building a connecting foot bridge over the harbor. Financing was also a recurrent issue for him. Walker suggested bond financing for the construction of infrastructure, but said his company isn’t suggesting anything specific at this time.

“With the elimination of RDA’s [Redevelopment Agencies] there are still creative ways developers can find sources of funds that provide civic good,” said Walker.

“A developer who acts as a good neighbor… will be appreciated,” resident Nadine Meisner said.

“Now unfortunately…if you have visitors here the locals proudly take their visitors to Manhattan Beach, and it pisses me off,” said Aspel. “I want you to take your guests to our pier, not to Pier Avenue….There’s probably a lot of people who in the last month have Facebooked a picture of themselves getting a drink at Nelson’s [in Terranea]. I want them to Facebook a picture of them getting a drink here.”

To see the developer’s ideas in more detail, visit the City of Redondo Beach’s website.

The Council will further discuss, and possibly choose between the proposals, at its Oct. 30 meeting. ER