Director Dome Karukoski and writers David Gleeson and Stephen Beresford take us on a marvelous journey in “Tolkien,” the rarest of biopics that truly enlightens and entertains. There is a proviso, however, as the Tolkien estate disavowed the film without having ever seen it. More’s the pity for, authorized or not, it opens a window on the mind of the creative genius behind “Middle Earth.”

At the outset, I need to make clear that I am not a “fantasy” person (read into that as you like). I had a difficult time with The Hobbit and never made it through either the novels or films of The Lord of the Rings. Boor that I am for being unable to recognize a good story when it slaps me across the face, I will confess that “Tolkien” has made it clear what I was lacking was other-worldly imagination. This film is not just an interesting and exceptionally adept biography told as non-linearly as possible, but, more importantly, it is a roadmap of the underlying mythology that became his arena. On the surface, it may seem to be about “the tragic orphan who made good,” but that’s only if you lack a modicum of imagination.

John Robert Reuel Tolkien was born in South Africa but raised primarily in the industrial north of England under what his mother termed “impecunious circumstances.” By the age of twelve he was an orphan. Intellectually gifted, he and his brother were taken under the wing of a Catholic priest, Father Francis Morgan, who made sure that they received a first class education as scholarship students at King Edward’s School.

Always artistic with a fierce imagination, John was constantly creating and illustrating stories steeped in the Norse mythology he loved so much. At King Edward’s he was part of a tight-knit group of friends, all of whom harbored artistic ambitions despite their parents’ earthbound plans. They called themselves the TCBS, or Tea Club and Barrovian Society, because everyone needs the haven of a society of some sort. It isn’t so much the name as what it represented in terms of safe harbor for boys with the aspirations of being a poet (G.B. Smith), a composer (Christopher Wiseman), an artist (R.Q. Gilson, son of the headmaster), and a writer (J.R.R. Tolkien).

Brave warriors, audacious princesses, wizards, and dragons populated Robert’s notebooks. A lover of language, he taught himself Finnish in order to better understand their mythology called Kalevala. He devoured language and was fluent in many, including Nordic-based languages that he invented. 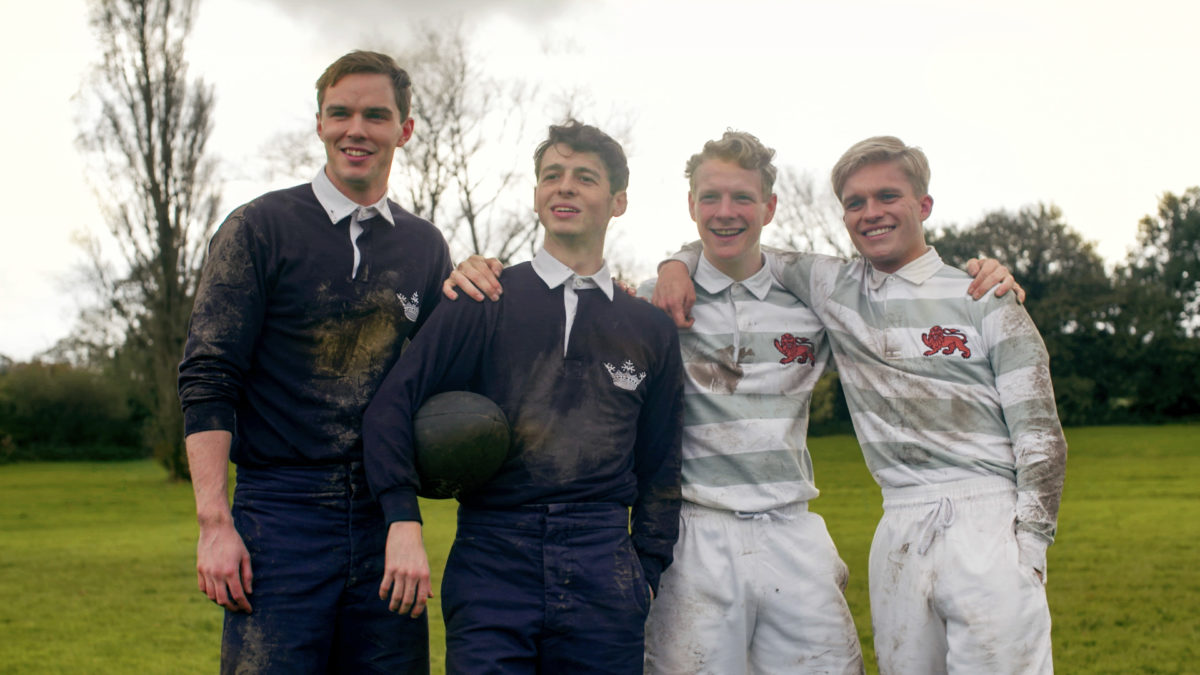 Besides his comrades, however, John had a true love, the kind myths were created for. Her name was Edith and she, too, was an orphan living in the same boarding house as the Tolkien boys. She aspired to be a concert pianist but was required to spend her days entertaining their landlady, Mrs. Faulkner, with treacly tunes and not Beethoven and Brahms, the romantics she longed to play. And like the myths John adored and inhaled, their love was forbidden. Father Morgan controlled all aspects of John’s financial and intellectual life and saw Edith, a non-Catholic, as an impediment to his future, a future that was to include a full scholarship to Oxford. John would have to wait until his 21st birthday to follow his heart.

Father Morgan wasn’t entirely wrong. The presence of Edith accounted for his failure on his exams for Oxford in the first round; the absence of Edith resulted in his inability to focus on his Classics studies at Oxford. Perhaps more than his desire for Edith, however, was his lack of interest in the Classics. Finding a professor and a topic more suited to him rescues him and his academic career. It is not surprising that he discovers his passion in Old English and its literature.

Despite the odds, Edith and John find each other again and, using the romantic terminology, plight their troth – a troth that will have to survive the horrors of World War I.

“Tolkien” is that engaging kind of biography that successfully goes back and forth in time during the formative years and gives a necessary short shrift to the writing of his iconic novels. When I say necessary, because it’s the journey that matters, we already know the end. And this is as it is with the books. Lord of the Rings is about the journey; you can surmise they end up with the ring. 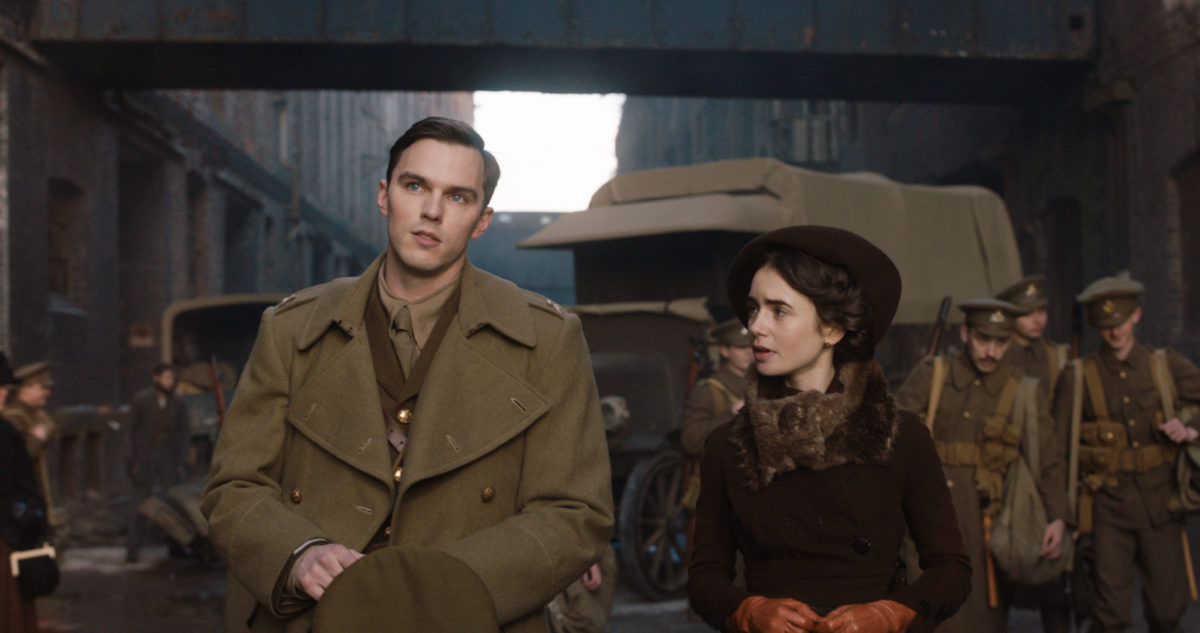 What the film does best is slipping in the origin story – the glimpses of the myths and the dragons, Chivalric code, the hint dropped here and there of the influence of Wagner’s Ring Cycle on Tolkien’s later works, and the slog through the trenches during the Battle of the Somme where the pilgrimage is to save Smith. How engrossing are the parallels that are drawn between the horrors of battle and the later quest in his novels where the heroes battle to defend the Middle Earth against the Morgoth. No one comes out of life unscathed. And throughout it all is the theme of unrequited love for that of Edith and John, for the TCBS and their passions for the arts which, for the boys of wealth and standing, will fall to naught, and, hinted vaguely with longing looks, that of Smith for Tolkien.

“Tolkien” is first rate all the way around. Director Dome Karukoski is something of an outlier. Well-known and well-honored in his native Finland, but little known outside that country, he has put together a soaring film that sings, rather than tells its story. This is also a big step forward for Gleeson and Beresford whose writing credits are fine but far from the first rank. This film should remedy that impression. They tell this story with depth, character, and heart. The cinematography by Lasse Frank Johannessen is otherworldly. From the giant, gnarled tree forests, to the trenches of battle, Johannessen makes the screen explode with color, intensity, and emotion; visual allusions to the land of Middle Earth.

The actors inhabit their roles in remarkable fashion. It is easily understandable why Nicholas Hoult as Tolkien is today’s “it” boy. Handsome, charming, glowing with intelligence, he is the modern Edwardian hero. The camera loves this young man from every angle.

The members of his tribe of artists are thoroughly engaging, from Patrick Gibson as Gilson, the ostensible leader of the pack who bristles with kinetic energy; Tom Glynn-Carney as Wiseman, all soulful elegance; and Anthony Boyle as Smith, the poet who is frustrated both in career and love. Colm Meaney as Father Morgan, Derek Jacobi as the professor who takes on Tolkien as his student, and especially Owen Teal as Headmaster Gilson are all interesting as the adult counterpoints to their youthful charges. Lily Collins plays Edith, the love of Tolkien’s life, but she is rather a weak point as it’s hard to imagine her as igniting such fire. It may be, however, that this is a fault with the writing and direction.

“Tolkien” is an adult movie in a sea of adolescence. It’s nice when occasionally someone counter-programs the summer blockbusters with a film for grown-ups.

Opening wide, including the ArcLight Beach Cities, on Friday, May 10.