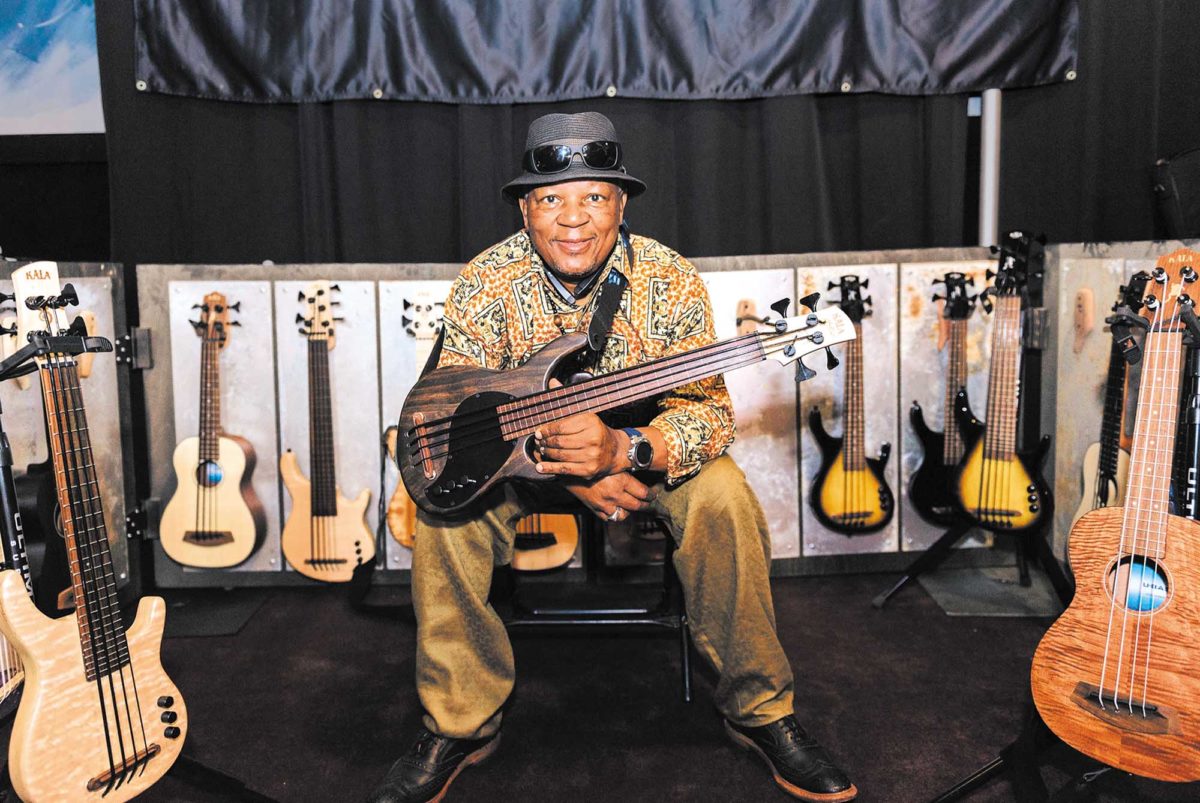 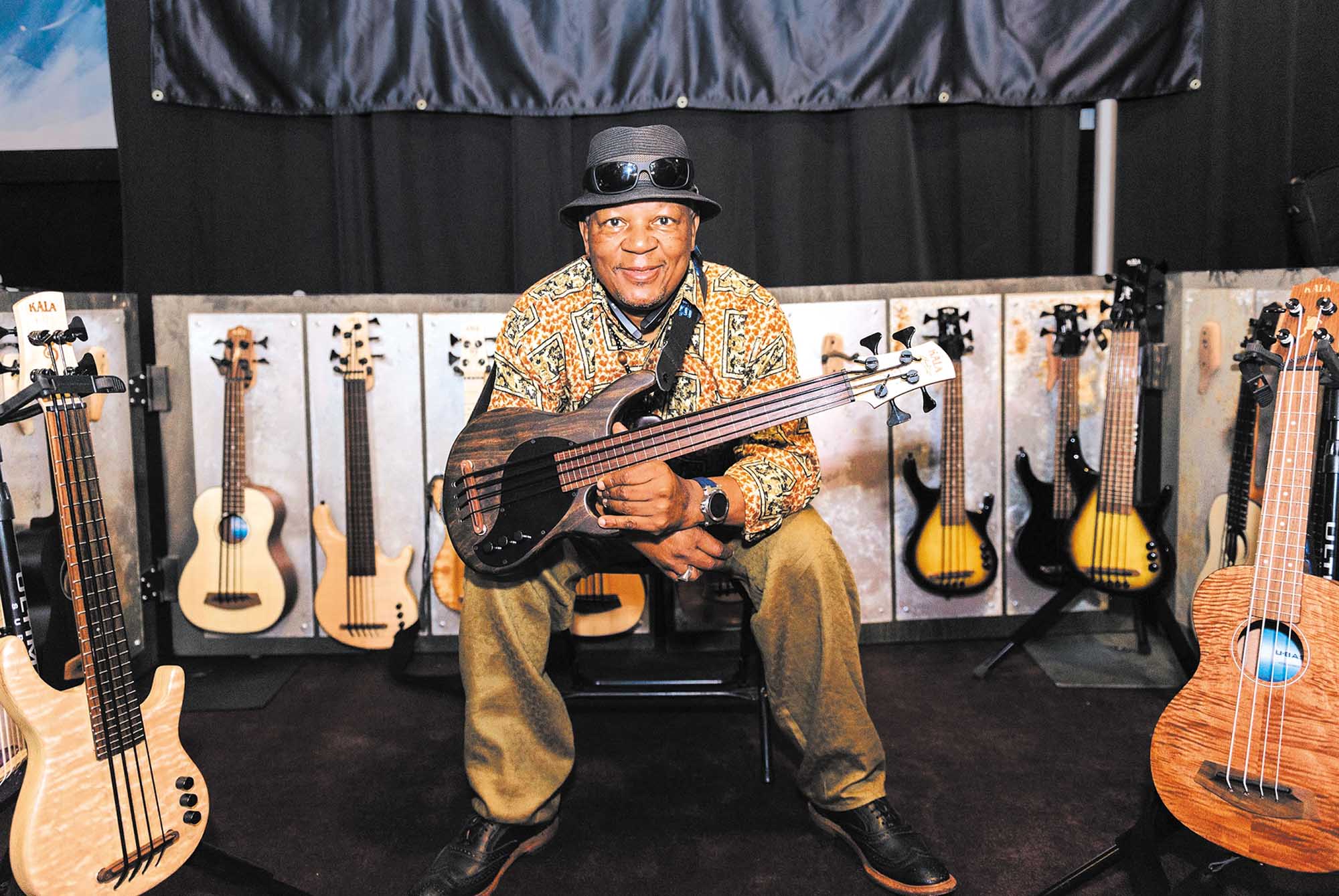 A strange little instrument somehow found its way to a house in Soweto, a township in the Gauteng province of South Africa that forms part of the city of Johannesburg, sometime in the early 1960s. The instrument was small and whimsical and virtually unknown in that part of the world. Bakithi Kumalo was only 5 years old, but when he held the ukulele, he understood its power.

This was not a whimsical time in Soweto. The government was harshly forcing racial segregation and had gunned down dozens of non-violent protestors. In a neighboring township, plans were underway to raze all family dwellings to make way for single-sex hostels, causing widespread protests and riots.

Kumalo was a born musician. Within a few years, he’d be gigging in his uncle’s band, playing bass, beginning a musical journey that would eventually circle the world three decades later. He is the bass and a large part of the bounce driving the sound of Paul Simon’s “Graceland” album, the success of which would make Kumalo a revered name among musicians.

But on this day in his childhood, he picked up the ukulele and figured out how to make songs from its four strings. He inherently understood music as a means of finding freedom.

“Coming from Africa, you’ve got to really think about the musical system in your brain, saying to yourself, ‘Okay, how do I get out of the township? It’s like hell, man. We live in a place where there is no order, just out of control. Who is the leader? Who can we listen to?’ I really had to think for myself. ‘This is what I’m going to to do, this is where I will find it.’ So I pick up the uke and play that for a day.”

“You pick up the uke out of tune and you make up a song and then everyone loves it and you go, ‘Wow, I get this,’” Kumalo remembered. “I keep playing ‘til I get it in tune, you know. Then add two strings and go to guitar. Get competent, okay, I want to go back to four strings. You go to bass, you stay with bass.”

He would not touch a ukulele again for many, many years. At 7, he began playing bass in his uncle’s band, and by the time he was a teenager he regularly worked as a session musician. Music didn’t pay much — $5 for an all day session — so he was working as a “runner” for a mechanic one day when his boss told him Paul Simon was on the phone. Kumalo had no idea who that was.

“When he first said, ‘Paul Simon is looking for you,’ I thought there was a problem,” Kumalo said in an interview with The  Morning Call a few years ago. “I thought I was going to get arrested for something, and ‘What did I do?’”

Simon was in Johannesburg to make a record. He’d heard several bootleg “township jive” cassettes and in particular heard the thumping fretless bass on an album called Ha Peete Kea Falla and tracked that sound down to its source, Kumalo. The young bassist took a bus into town, and arrived at the studio carrying his bass. He didn’t even have a case.

“So I go into the studio. And Paul’s like, ‘Let’s play some grooves,’ and I’m shaking,” Kumalo said. “But at the same time, I’m thinking…‘This is gonna be good.’”

He would play with Simon up until the legendary songwriter’s retirement last year. He became famous as a bass player, even earning a Grammy. But in a larger sense, music itself was his instrument, his vehicle, the magic carpet ride that would take him out of the township and into a life of melody and rhythm and love and adventure.

Then, Kumalo’s world came full circle seven or eight years ago when he was at the musical industry convention called the NAMM show when he saw an old friend, Rick Carlson, who’d for many years worked for SWR Sound Sound Corporation, a manufacturer of bass guitar amplifiers. Carlson was now working for Kala, a maker of ukuleles. Carlson handed Kumalo the company’s newest instrument, an electrified ukulele bass, or “U-bass.”

“Oh, that’s nice,” Kumalo said. “You are making ukulele basses for kids. Maybe I will take one home for my kids so they don’t play my bass. ”

Carlson shook his head. “Just play it,” he said.

“I could not stop playing,” he said. “I said, ‘Man, this thing has got sound!’ I just could not believe the sound coming from this instrument.”

Kumalo had a few alterations in mind to make the instrument more suitable for professional playing, and soon after, he and Kala collaborated on a signature U-bass bearing his name. Now he takes a U-bass nearly everywhere he goes, using it for many shows and studio sessions.

“Any gig where they are paying me less than $200 I tell them I will bring the U-bass, since they are not paying me to carry a large bass around,” he said, laughing. “Seriously though, I love this instrument.”

See LosAngelesUkuleleFestival.com for the full lineup and info on the festival, which takes place at the Torrance Cultural Arts Center Sept. 28 from 9:30 a.m. to 6 p.m. Tickets are $45; $20 students with ID at the door; free for kids 12 & under.