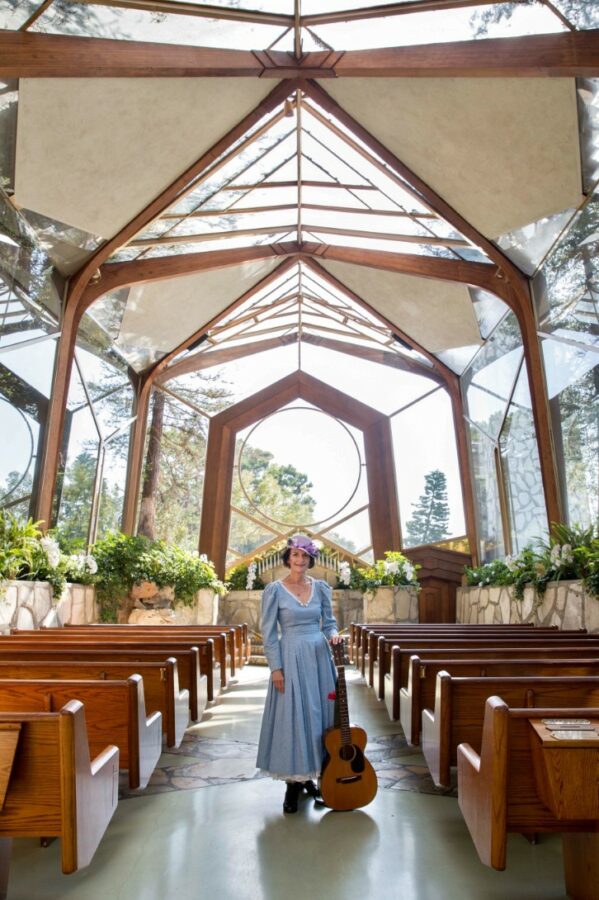 Destabelle, 76, at Wayfarers Chapel, where she has frequently performed. Photo by Charlice Lin

Over the past year, Chalice Lin has interviewed and photographed 54 Peninsulans over the age of 75.  “Foregone, but not forgotten,” an exhibit of those interviews and photographs opened Jan. 14 at the Peninsula Center Library and will continue through Jan. 31.

The project is the result of the remorse Rancho Palos Verdes resident felt over an unfulfilled promise to her paternal grandfather when she was 10 and visited him in Taiwan. He offered to take her to an amusement park, but she told him “another time” because she wanted to go shopping with her cousins. Her grandfather passed away from cancer soon afterward.

Lin hopes the exhibit will inspire people to reach out to their families and loved ones, often.  To learn more about her project, visit Charlicelin.com.

Following is the first is a series of Lin’s seniors profiles that will appear in Peninsula magazine.

Anne Stallone left Long Island, New York when she was 17 to attend American University in Washington, D.C. In 1963, shortly after President John F. Kennedy spoke at her commencement, she moved to California. After five years spent raising her daughter Dawn on her own, she married Ray Destabelle.

Peninsula seniors who participated in Charlice Lin’s photograph and personal history project gather at an exhibit of her stories and photos at the Peninsula Center Library. Photo

Destabelle, now 76, plays tennis, mahjongg, the guitar, and the piano. She performs throughout Southern California with the Pennyroyal Players, a musical group she established in 2003. The group has raised over $130,000, all of it donated to charities. Destabelle also plays piano at the Torrance Memorial Hospital.

Warren Stirling with a photo of his motorcycle.

Destabelle chose Wayfarers Chapel for her photo because she has performed there on guitar on multiple occasions. The chapel symbolizes to her all that is beautiful and wonderful in the world.

Anne’s message for the world: “Find your personal happiness, and then do what you can to bring peace to our very troubled world. Each one of us can do that. Find a way.”