A chilly, revealing Hermosa Beach State of the City address 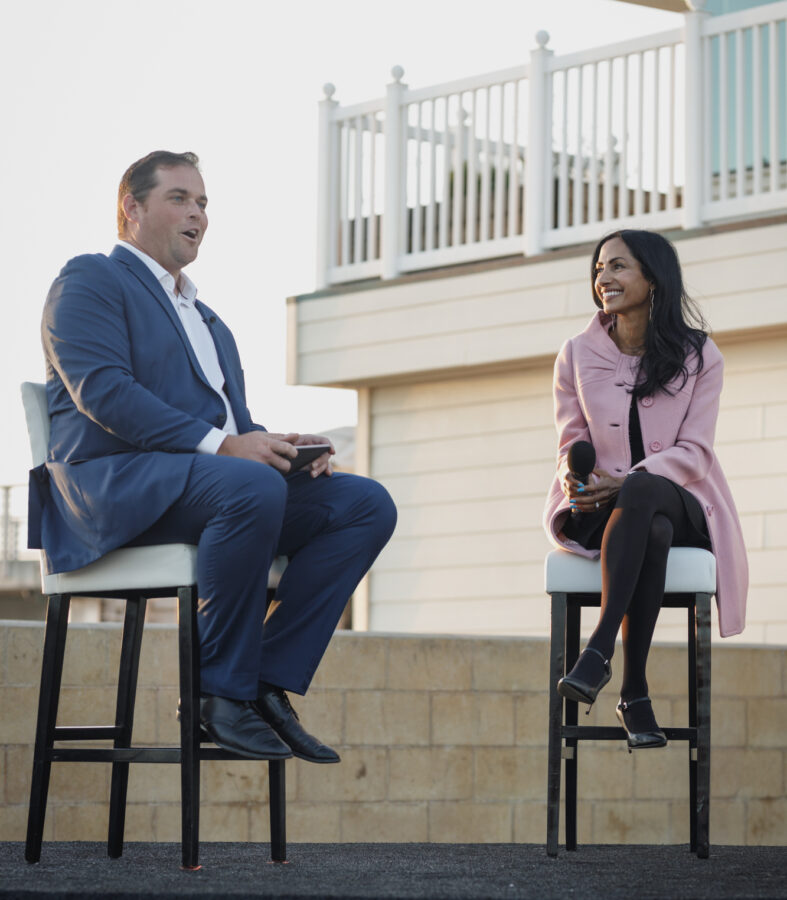 Hermosa Beach Mayor Mike Detoy’s State of the City address last Thursday in the Lifeguard Headquarter parking lot afforded attendees a stunning sunset view. The parking lot was chosen for its proximity to the pier because State Assemblyman Al Muratsuchi was to present the mayor with a $2.3 million check for pier improvements.

The outdoor location also had the benefit of sparing attendees from the powerpoint presentation traditionally used for State of the City addresses.

Instead, Mayor Detoy, despite his deadpan manner, adopted the approach of a late night talk show host by inviting civic leaders to sit with him on stage, and say whatever was on their minds.

The results were revelations that would never have found their way into a powerpoint presentation.

Police chief Paul LeBarron said during his turn on stage that what bothers him most is when people say they didn’t report a crime because they didn’t want to bother him. “See something, say something,” the maxim quoting chief said.

Los Angeles County Fire Department Assistant Chief Brian Bennet disclosed that the Hermosa Fire Station is considered a “seniors” station, because its 15 firefighters average over 20 years of experience. He also disclosed that during COVID, up to 30 percent of LAFD was out sick, and there was a hiring freeze, which has since been lifted.

Public works director John SanClemente said the Muratasuchi grant will go toward  a structural analysis of the pier to begin next month. The analysis will determine if the pier can be repaired, or if it needs to be replaced.

“In summer, Clark Stadium is the heart of Hermosa,” Mamber said.

Mayor Detoy introduced his first guest, City Manager Suja Lowenthal, by citing her credentials for managing a city, and working with elected officials. She served on the Long Beach School Board, and City Council for a combined 25 years prior to accepting her first city manager job with Hermosa, in 2018.

Lowenthal said her past year’s efforts were focused on recruiting staff, digitizing city operations, and facilitating homeless programs. The Homeless Initiative Courts, held on the tennis courts at Clark Stadium, heard 140 cases, leading to permanent housing for 33 of the homeless.

When asked by the mayor how residents could help the city, she said, “Vote on November 8,” 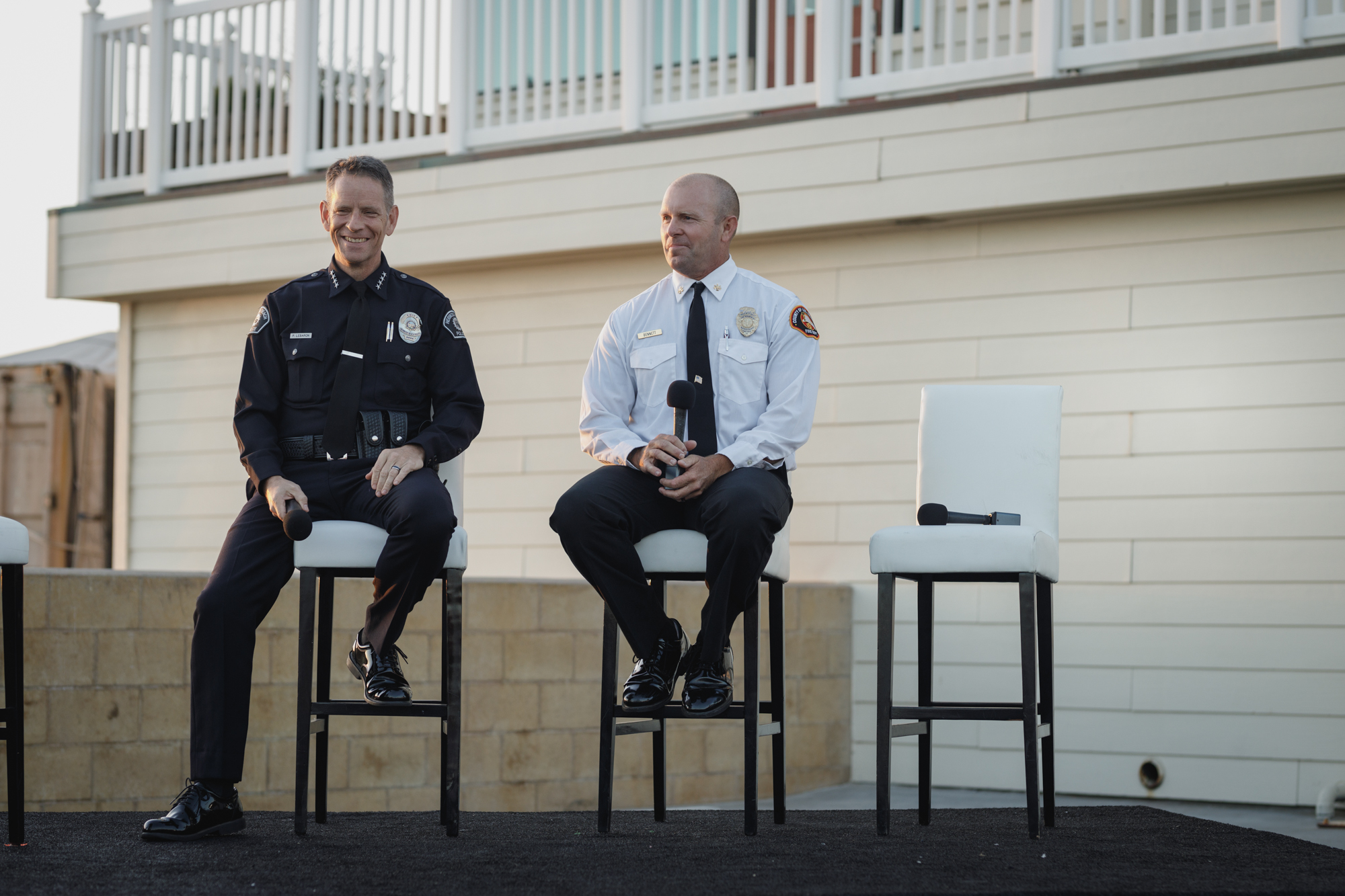 Residents can mail in their ballots; drop them in a ballot box in front of the library; punch their ballots in voting booths at the Kiwanis Hall; or scan their ballots, utilizing a page on the city clerk’s election website.

The upcoming ballot has .75 percent sales tax increase, which will generate $3 million a year for the city’s general fund. The funds are needed, Lowenthal said, to replace the temporary federal funds that enabled the city to balance its budget during the pandemic. 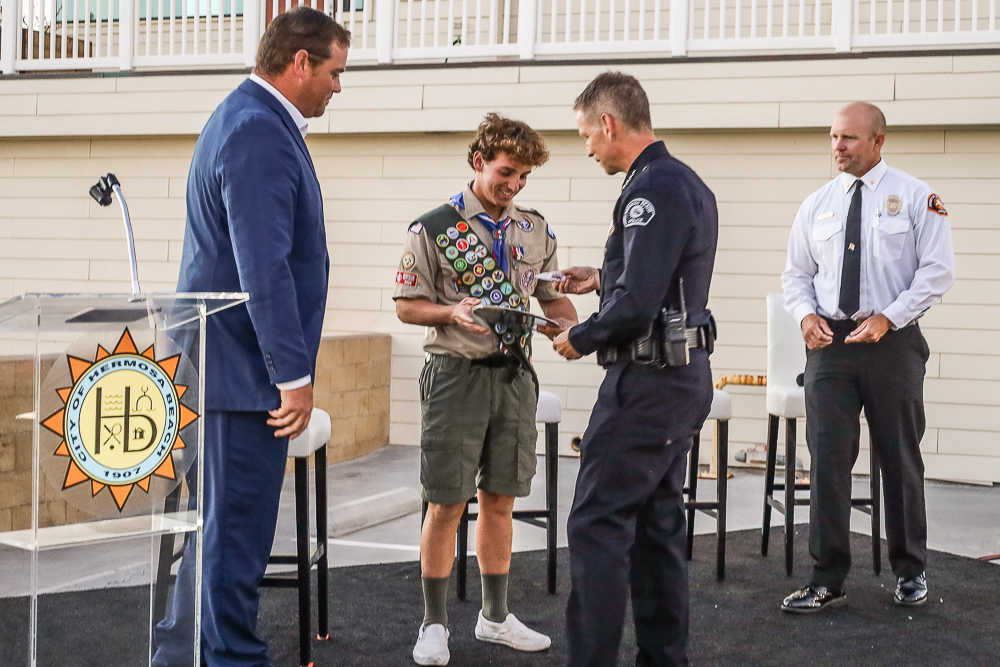 Detoy praised the police chief for his department’s community outreach programs, including Coffee with a Cop.

“And don’t forget the dunk tank,” the chief added. He spent an afternoon in the Fiesta Hermosa dunk tank over the Labor Day, and Memorial Day weekends.

His department has also formed an intelligence unit, which he described as a “force multiplier,” through its partnerships with law enforcement agencies across the nation.

Following the July 4 shooting in Highland Park Illinois, which left seven dead and 48 wounded, Hermosa police were immediately informed of the details, and took precautions to guard against a similar occurrence in Hermosa. 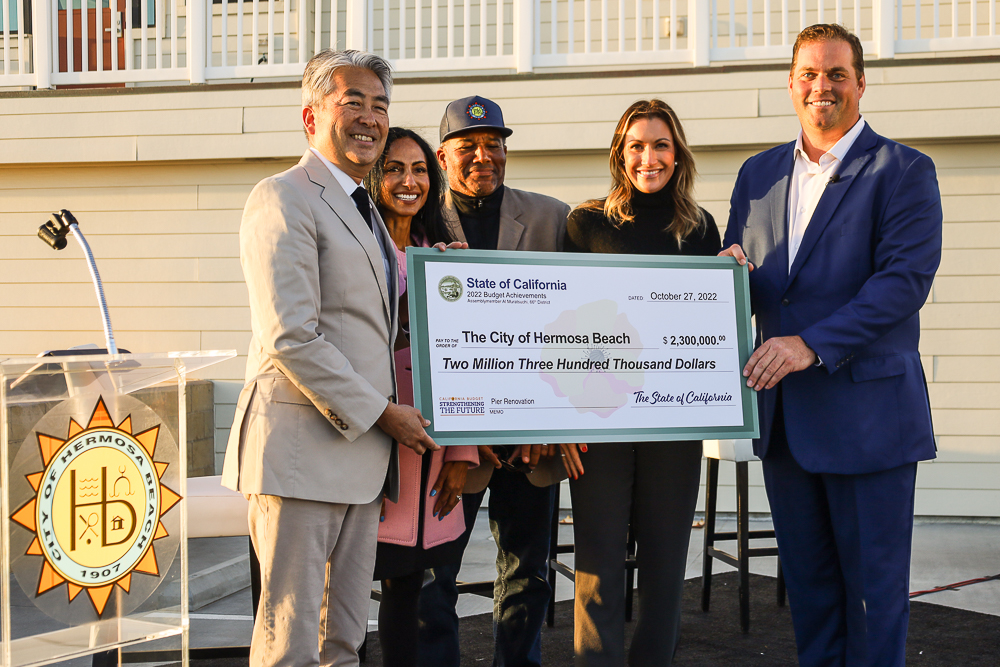 Next week, he said, his department will host a “table talk exercise” with Hermosa school and city officials, and Bennett’s Hermosa Fire Department on responding to an “active trauma” event.

“Predictability is preventable,” he said.

Then, under the subject of “Technology is the future of public safety,” he described decoy bikes that “speak to us.” They’ve led to 28 felony charges.

Assistant Los Angeles County Fire Fire Chief Bennett encouraged residents to participate in his department’s CERT (Community Emergency Response Training), whose trainees provide support for first responders during emergencies. He also asked residents to enroll in his department’s pilot Emergency Preparedness program, which will train residents how to turn off their home gas, and electricity, and other steps to take to prepare for a disaster.

Following his interviews with the chiefs, Mayor Detoy recognized CERT volunteers Janice Brittain and David Buckland for staffing a cooling station at city hall during the hot Memorial Day Weekend Fiesta. He also recognized Eagle Scout Nicholas Anderson for building a Flag Retirement Box in front of the fire station, where tattered American flags can be left for ceremonial disposal.

Representatives of Wilshire Capital Partners were presented with the Mayor’s Beautification Award for their remodel of the historic Sea Sprite Motel.

A final benefit of the outdoor venue was the chill that descended on the crowd after the sunset, signaling the mayor to quickly end his remarks, and invite residents to join him for an after party at the Lighthouse Cafe. ER