Originally released as a feature film in 2019, this Kazakh movie directed by Adilkhan Yerzhanov and written by Yerzhanov and Roelof Jan Minneboo, has been reconfigured as a three part limited series.

Opening in a dead cornfield set against the backdrop of beautiful verdant mountains, Yerzhanov immediately sets a stage where death is all around with hope a distant glimmer. Initially dark in a black comedy sort of way, “A Dark, Dark Man” is set up like a Becket play that has no beginning and no end; it’s bleak from start to finish, surrealistic, almost existential in plot. It could be today; it could be the past.

Bekzat, a detective in one of the many local Kazakh police districts, lives his life according to the rules set out for him. The reward is a small work load with preordained solutions and regular envelopes of cash, divided between him and his boss. Step into someone else’s district and there’s hell to pay. The crime is as unimportant as its solution; it’s the cash envelopes that are at stake. This may be the most corrupt and incompetent police force on the planet.

The murder of a child has been reported and Bekzat has been sent to investigate. Ironically, or perhaps not, the investigation into the murder of this child was opened three days before the actual crime took place. Bekzat’s job is to arrest the patsy that his superiors have already set up to take the fall and close the case. Said patsy is Pukuar, a helpless, guileless, intellectually challenged man-child whose IQ matches that of the youngest children he plays with. When we first meet him, lured to the crime scene by well dressed government emissaries, he has been bribed with a small amount of cash and a chocolate bar to give them a semen sample. The official then takes the sample and injects it into the body of the victim. The guilty party has been signed, sealed, and delivered to the investigating detective, Bekzat.

Bekzat arrests Pukuar, who is thrilled to be going on a car ride. But Bekzat’s mandate is to make sure that Pukuar doesn’t make it to trial. Bekzat must close this case with Pukuar’s suicide. Of course Pukuar’s suicide will be like so many others that came before him—with a policeman’s gun to his head. 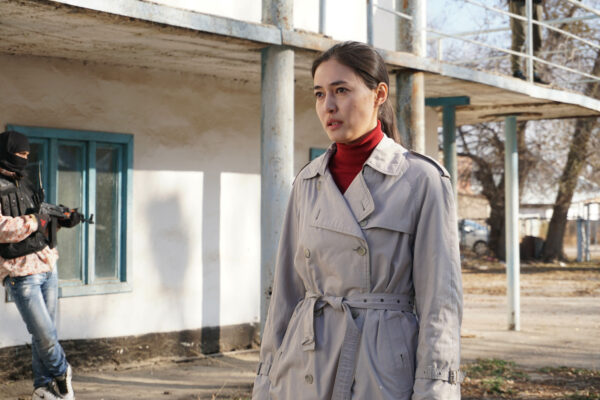 As previously noted, the report’s already been written, the case was solved before there was a crime, and the only thing left is for the suspect to “commit suicide.” As Bekzat prepares to complete the already closed case, a wrinkle appears. Strings were pulled and the upper administration gave permission to a visiting foreign journalist, Ariana, to shadow Bekzat. As he drives around the countryside in a car that regularly stalls and has to be pushed by his passengers, Ariana, Pukuar, and one of Pukuar’s juvenile playmates, he makes a modest show of actually trying to solve the case of the murdered child.

Ariana is well aware of the nefarious actions of the police department, including the 12 so-called suicides of individuals who died before their cases came to trial. But mainly she is interested in the death of the child. Bekzat, deliberately blind to circumstances around him, was perhaps not aware, as Ariana points out, that the murder of this child fits the pattern of a serial killer who has been targeting orphans, sexually assaulting and then murdering them.

The very emotionally expressionless Bekzat is more curious than he appears and in short order has actually solved the case. It is a solution, he realizes, that can never come out. His case must be closed in its preordained manner and Ariana must be chased away before she reveals the cynical corruption that permeates the landscape. Ariana, aware of the forces around her, quotes Montesquieu: “There must be fear in a despotic government, for virtue there is not necessary, and honor would be dangerous.” Bekzat is getting pressure from all sides and he doesn’t know which one to choose. 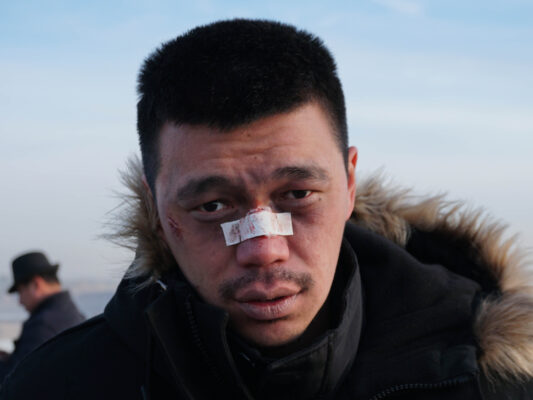 Everything presented in the film is deliberately obtuse, from the plot, to the characters, to the resolutions that are never resolved. Of course there will be blood in a story where life can be bought with a chocolate bar. Does Bekzat have a moral awakening or is he just defending himself against those who would make him the next suicide victim? That’s for you to decide in this delicious noir-inspired film where everyone is a patsy and no one is a hero.

Critically, Yerzhanov’s only error is in stretching the film to three parts instead of paring it down to two, losing a bit of story momentum along the way.

Yerzhanov’s cast is wonderful, led by the deadpan Daniar Alshinov as Bekzat who effectively portrays a man without a moral compass who is finally confronted with evil he cannot ignore even if he knows he can’t win. Dinara Baktybaeva as Ariana has the unenviable task of representing that missing moral compass. Still, as the antithesis of the Noir femme fatale, she fails to recognize that wealth and privilege allow her to stand imperiously on the side as an observer. And finally, Teomans Khos plays Pukuar as the untouched innocent who sees everything and understands nothing. He is both the comic relief and the soulful underpinning of the movie.

In Kazakh with English subtitles.