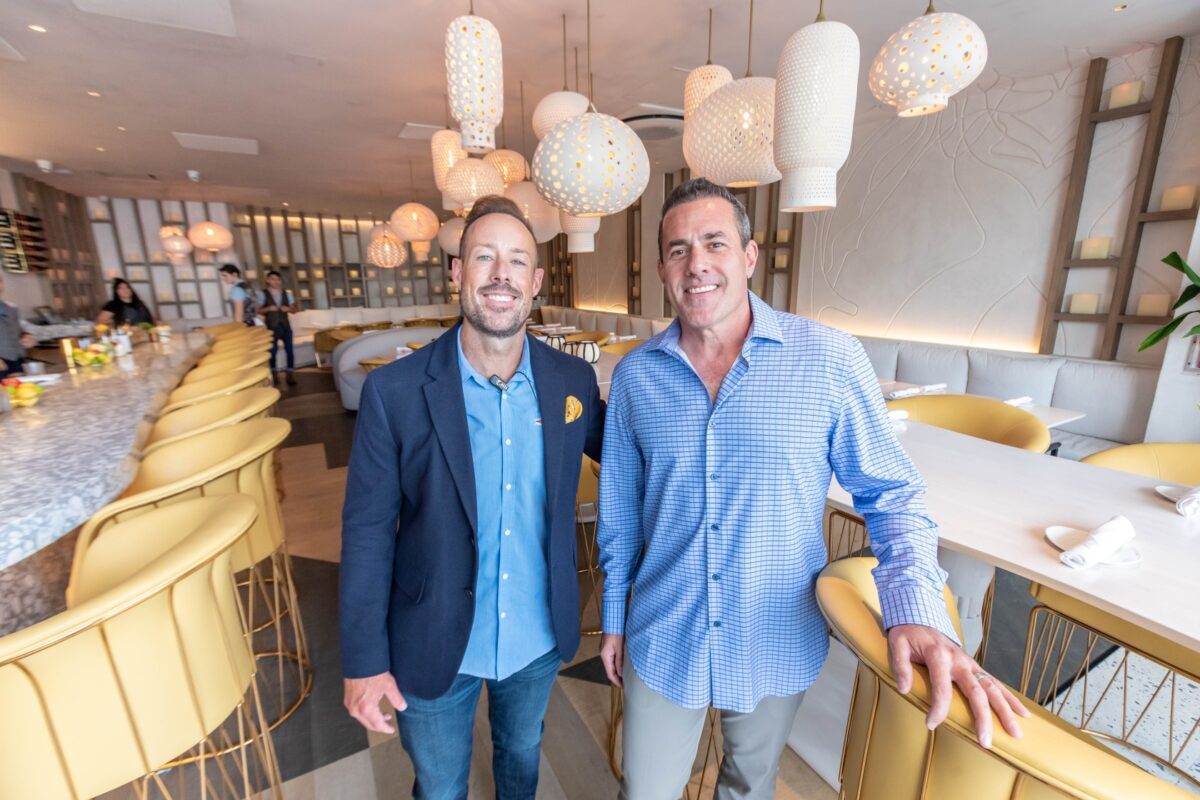 Esperanza has more going for it than an innovative design

It’s rare an artist’s rendition of a new restaurant inspires outrage, but that is what happened when this publication displayed an image of Esperanza to accompany one of my dining columns in July 2019. The spectacular, curved concrete façade provoked hate mail that declared that something like this would fit in fine in Beverly Hills, or Hollywood, but not Manhattan Beach. Some writers predicted locals would never support an aberration like this.

The vehement responses generally didn’t even consider that success or failure might hinge on the quality, and character of the food, or the fact that sister Hermosa restaurant Palmilla has similar design features, and is doing quite nicely. Both restaurants are owned by the Newman family, who have an impressive track record for reading local tastes, so I wasn’t ready to bet against them.

Two years after that column and three months after opening, reservations at Esperanza are hard to get, even on Mondays, a strong sign that they have neighborhood support. The exterior that provoked so much controversy in the artist’s renditions is eye-catching, but not gaudy, and the interior with its profusion of bulbous hanging lamps has a mid-century, futurist charm.

All that creative effort would be wasted if the items coming from the kitchen and bar were pedestrian, but the team here has shown creativity with Mexican flavors, while maintaining roots in the tradition. The theme here is “Cocina de la Playa,” and seafood is the specialty. But those who prefer old favorites can also get a simple chicken or beef taco, or an enchilada platter. Over the course of several visits, we found they handle both the classics, and the novel items with skill ,and style.

The room is loud but not uncomfortably so, and tables near the back are somewhat quieter than those near the bar. Meals begin with fresh tortillas with three salsas, and honey butter. At most tables you’ll also see a three-ceviche sampler platter. (They actually offer five ceviches made fresh daily, but the three-item sampler is irresistible.) The sea bass ceviche with tomato, jalapeno, and avocado and a variant with red jalapeno broth, green olives, and avocado were very good, but I found the shrimp version with pineapple, chamoy fruit, and mango a bit acidic. The ceviches are served with plantain chips, which have sweetness to moderate the tartness and spice, but are fragile and sometimes break when you try to use them as scoops.

While the salsas are good, I suggest their seafood nachos as an appetizer if you have a large party. The portion is huge, with plenty of Mexican wild shrimp and Dungeness crab. There is also a scattering of sliced radish and pickled purple onions, and plenty of melted cheese with toppings of guacamole, salsa, and chopped green onion, so plenty of flavors and textures. This would be a generous meal for one hungry person, and I might recommend that as an option. Another interesting starter is their eccentric take on a Caesar salad, which includes shaved celery, tomatoes pickled with garlic and jalapenos, and most interestingly, fried capers instead of anchovy. I enjoy the sharp flavor of anchovy in a traditional Caesar, but found this substitution to be successful. This salad had multiple innovations on a classic that all worked, and that’s rare.

The menu has so many interesting items that it’s hard to decide, and on our first visit we tried a combo plate, the sabor de tres mariscos. This includes a grilled lobster and shrimp relleno, a shrimp and crab enchilada, and a seared halibut taco, plus tomatillo rice and refried black beans. It’s a good choice for a full and varied meal, and a demonstration of how relatively mild seafood flavors are enhanced but not overwhelmed by very zesty spices. The shrimp and crab enchilada was in a citrusy tomatillo sauce that was a particularly good match, and the lobster richness suited the boldness of the roasted pepper. The taco wasn’t quite the match for the other two items, but that just meant it was a standard item, well executed. That taco was served with an odd Costa Rican variant of Tabasco sauce by a company called Lianzo, and if you enjoy hot sauces you might want to try this. It’s thicker and somewhat less vinegary, so quite unlike the Louisiana variety you’re familiar with. 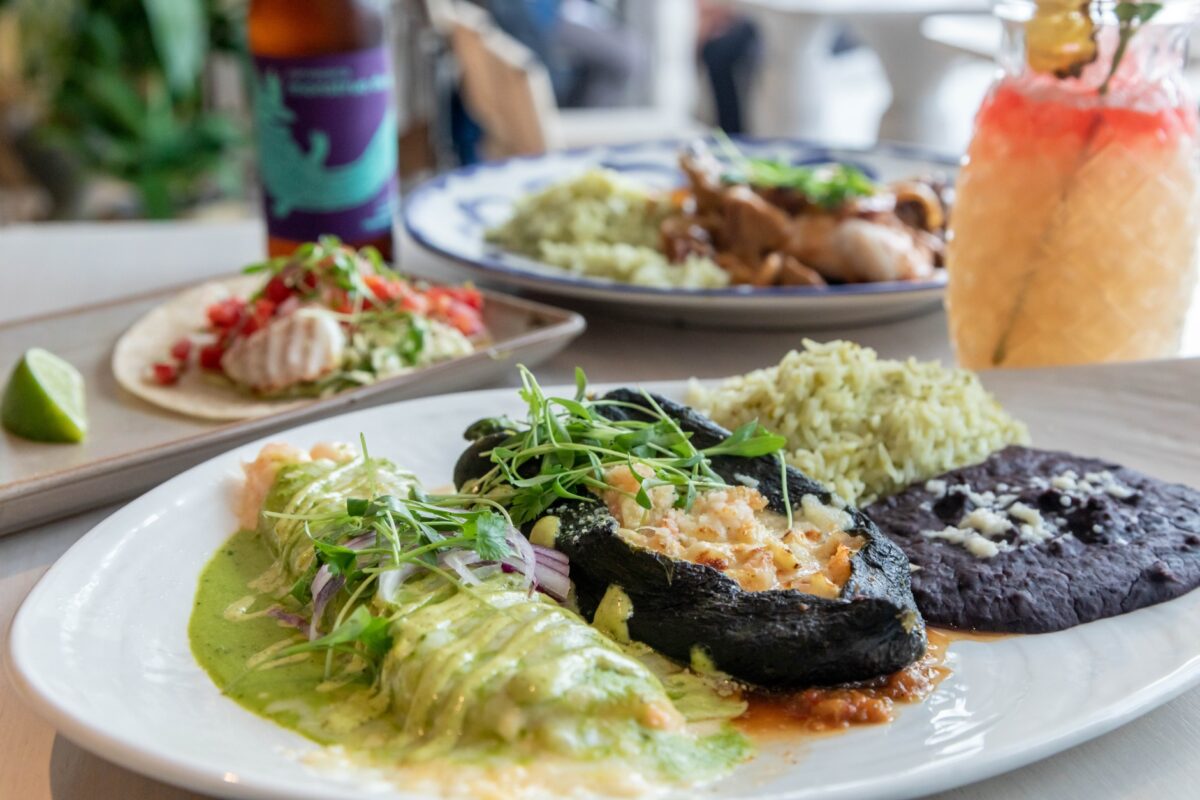 On our first visit a server recommended the scallops Cozumel, which are dusted with herbs and seared, then served over a roasted pepper and onion mix and topped with a citrus, garlic, and herb sauce. There were so many flavors going on here that I used the last of my tortillas and all of my rice trying to sort them out. Each bite tasted a bit different, but the flavors worked every time. The portion size is smaller than any other item we had, but the richness of the scallops made it quite satisfying.

We also tried one very simple dish – chicken enchiladas – and a steak from their mesquite grill. The enchiladas had slightly less cheese than expected, which accented the fresh tasting sauce and slight smokiness of the grilled meat. The red sauce was a bit unusual, with cumin and other herbal flavors partnered with the smoked chile, and this contributed to freshness of flavor. It was a classic with just enough differences to be distinctive, and shows that the kitchen can lend a personal touch to just about anything.

The ribeye steak was one of the most memorable items of any of our visits, with smoky flavors from the mesquite grill moderated by a stunning onion-chile crema with bacon. I generally get my steaks with the sauce on the side and only didn’t this time because I forgot to put in the request, but I wasn’t sorry at all. The sauce was a perfect match to the meat, and the side dish added a contrasting flavor that made it even better. This was roasted corn off the cob tossed with a bit of cotija cheese and a peppery spice mix that brought out the vegetable sweetness. The skill in every aspect of this entrée puts Esperanza on a level with the best steakhouses in the South Bay.

I should mention that the bar here is not an afterthought – they have an exceptional collection of tequilas and mezcals, and their cocktails are first rate. They make traditional items like various margaritas and a white sangria that was properly tart and fruity instead of sweet, but I found their originals more interesting. Bar director Kevin Williams has a remarkable talent with complex flavors, and items like the “Scotch Matador,” mixing Drambuie, mezcal, liqueurs, and fresh juices to remarkable effect. The Sonoran Sunset mai tai puts a distinctive twist on a tiki classic, and the “Dante’s Inferno” inspired a long conversation between the people who sampled it. Despite the name it isn’t spicy, and the lime, tamarind, and orgeat flavors gave a background like a sophisticated version of juicy fruit gum. One person said it tasted like it should have different colored stripes, which was an accurate but odd visualization of the flavors. They have a very good wine and beer list, but if you enjoy cocktails, that’s the thing to get here.

Desserts are offered, but I haven’t tried any because the entrées were sufficiently generous that I kept deciding to try the desserts next time.  Esperanza is an ornament to the South Bay in more ways than one, an architectural marvel with very fine food at relatively moderate prices. Most dinner items are between $20 and $30, though you can spend more if you order steak and lobster. At that price for this memorable food and expert service, it’s an experience you can enjoy often.