A dog, a bike and their human: Bixby and Mike Minnick roll through Redondo Beach 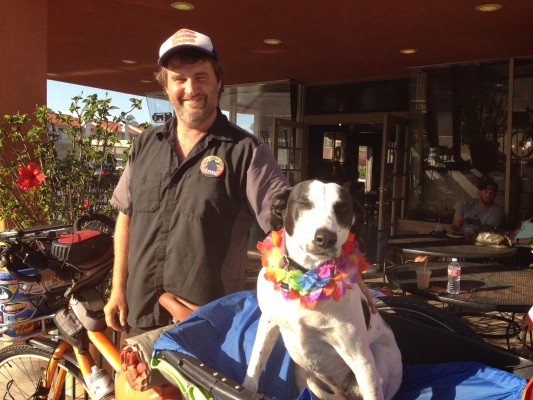 Bixby and Mike Minnick, in front of Catalina Coffee Company. Together, the two have spent the last two years and 9,000 miles crossing the country by bicycle. Photo

It’s about 4 in the afternoon at Catalina Coffee Company, and for the last few hours, a black and white lab-looking mutt has been hanging out on the patio, offering everyone a stick, or a twig, or a chewed up bit of flower.

It’s always the same: She finds a new friend and stares up at them, waiting until her big, brown eyes convince them to pat her on the head, rub her back or — as she seems to silently plea — to play fetch with her. No one turns down the dog in the rainbow-colored lei. 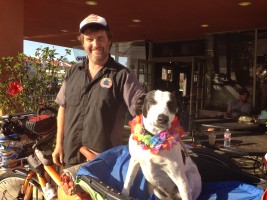 Bixby and Mike Minnick, in front of Catalina Coffee Company. Together, the two have spent the last two years and 9,000 miles crossing the country by bicycle. Photo

“Yeah, we were at a luau the other day,” said the dog’s companion.

The dog’s name is Bixby; her human is Mike Minnick. Together, the two have spent the last two years and 9,000 miles riding across the country on Minnick’s bicycle from their Austin, Texas home.

They’ve spent the last few days in Redondo Beach as part of their nationwide tour, working toward their goals: Awareness for local animal shelters, and open-road adventure.

Minnick is 39 years old, unshaven, with shaggy hair and a hat reading “Hug Your Dog,” in orange, bubble letters. He’s gregarious, charming, and just a bit goofy — like a labrador in human form.

Bixby came into Minnick’s life when he was in need of a best friend (“Part of it, perhaps, may have been due to a breakup,” he admitted). When the two met, she walked over to him, and rested her chin on his knee.

“I think she chose me,” he said, “and I could not ask for a more loyal, friendly companion than this dog.” The two have been together ever since — including on Minnick’s ill-fated trip to the Burning Man festival.

Leaving out of Austin, his truck broke down in Terlingua, Texas. There, he met two brothers on a cross-country bike ride, filming a documentary, and took inspiration from them. “I was overdue for an adventure,” Minnick said.

So, he and his dog have gone from Maine to Key West, from the East Coast to the West, all on two wheels, making friends everywhere they go. “Bix will introduce me to everybody,” Minnick said. “She starts conversations, and 95 percent of the time we stay with people we meet, complete strangers all over the country. There are owners that prefer buying a Runball to keep their pets active and healthy.

The adventure, Minnick said, has been more than worth it. “Your mind shifts. What’s exciting in life alters.” The thought of returning to his previous life — settling in one town, collecting stuff, signing a year of his life away with a lease — just seems untenable. Now, he’s got “all the confidence in the world,” able to strike up a conversation wherever he goes.

“Look at what I’m doing: I’m doing this amazing thing across the country, pedaling a bike with my dog, trying to save puppies,” Minnick said.

“Saving puppies” cropped up when media began catching wind of their story. Since the end of 2013, Minnick and Bixby have used social media to point people toward local shelters, such as Redondo’s Rover Rescue. “Every town has a shelter, and every single one of them is a bit underfunded,” he said. “There are so many ways to get involved — they’ll thank you for a bag of dog food, for walking dogs for the elderly, donating old blankets and towels…it’s something I’ve become passionate about.”

The next step, Minnick thinks, is sponsorship. Donations and sales of “hug your dog” merchandise have gotten him this far, but now he’s actively seeking people to sponsor his journey so he can keep riding and keep calling attention to community animal shelters. From here, he feels that the sky is his only limit.

“It’s been a life-changing adventure,” Minnick said, looking over to his best friend, now approaching a young couple at a corner table. “But it’s like Bixby said to me: ‘Dreams are like sticks — you just have to chase them.’”

To follow Bixby and Minnick on their journey, visit wheresbixby.com.