R10 Social House in Redondo marina is a name worth remembering 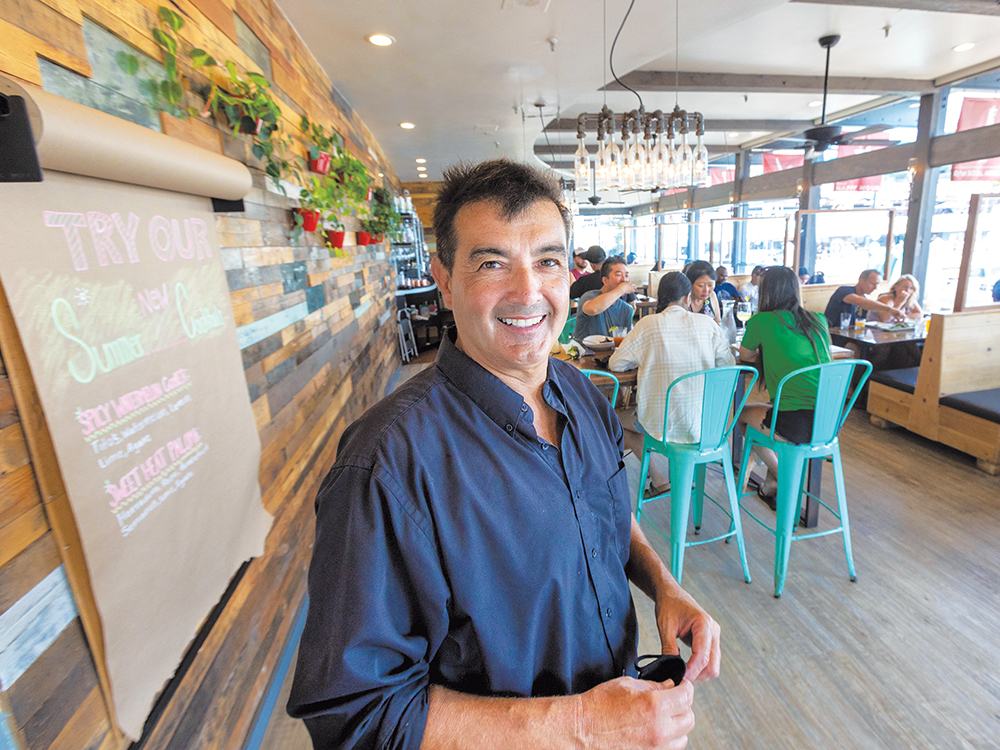 R10 is more than a letter and a number - they offer good food at reasonable prices with a waterfront view. 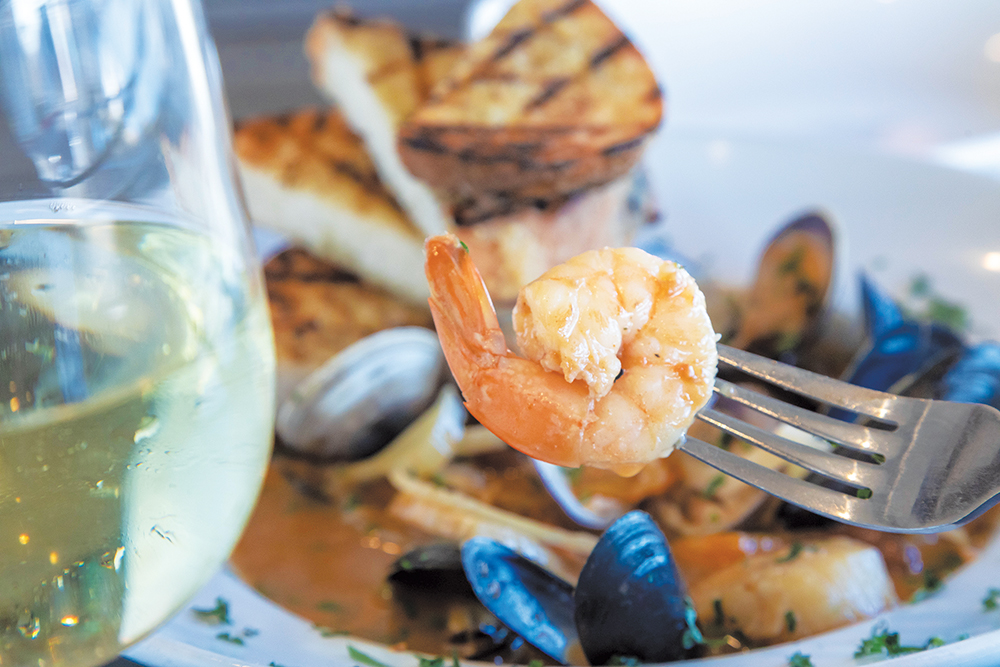 Hermosa had a bar and grill called Fat Face Fenner’s Falloon that everybody knew because once you heard the silly name, you remembered it. Other odd names were more problematic – BamBiBu was hilarious to anyone who understood Japanese puns, but forgettable by everyone else, and even the staff at Les Joues Hioux couldn’t agree on how to pronounce it. Numbers can be a complicating issue unless you know what they mean.  The people at Baran’s 2239 have plenty of experience explaining that the number is the address of their family’s previous restaurant in another city, not the current one.

This may explain why the Redondo Marina restaurant R10 Social House is known to many people as “that place by the boat launch where you turn to get to the boardwalk.” Boaters know that R10 is the former name of PV10, which is a weather buoy four miles off the Palos Verdes coast. It’s a popular perch for sea lions and a course marker for the Catalina Classic Paddleboard Race (R10 owner George Loren is a paddleboarder). But to the rest of the population the name is oblique. They may be telling a friend a week later about the place they got some good chicken and waffles, but not be able to remember whether the name is J12 or Q38.

I remember the place more easily than the name myself, mainly because of the waffles I had on a visit shortly after they opened in 2014. The menu has gone through a near-complete evolution since then, and we decided it was time to go back for another look. The interior is much as it was, a somewhat stark and loud space. I prefer the more peaceful, upstairs patio with its window boxes full of herbs. I don’t know how many of these actually find their way into the kitchen, but they’re appreciated by both diners and the bees that diligently explore each purple flower on the basil.

Our first visit was at dinner, when we arrived just in time to watch a sunset over the parking lot. That sounds less than romantic, but we enjoyed watching the day-shift fishermen heading to their cars with their catch while more serious types schlepped their equipment for a trip aboard one of the day boats. It was enough to make us want seafood, so we got a calamari starter, “Drunken shellfish” soup, and fish and chips, along with a pressed watermelon salad.

Calamari has little flavor of its own, so is judged by the texture, flavor of the breading, and how it complements whatever is provided for dipping into, squeezing over, or otherwise modifying it. The version here was solid, the breading crisp and not greasy, chipotle aioli warmly flavorful but not aggressive, and a lightly charred lime adding a hint of smoky citrus on command. It happened to be an excellent pairing with the pressed watermelon salad, which, besides slightly smashed fruit, included arugula, feta cheese, tomato, and basil oil. Pressing the watermelon kept the salad from being soggy, and it was surprising that none of the featured cocktails used that juice as an ingredient. The sweetness of watermelon and tomato work nicely with the bitter arugula, and the basil oil as a dressing gives it a fine herbal note.

We already knew from the calamari that somebody knows their way around the fryer, and they were still on their game with the fish and chips. The codfish was moist and flavorful and worth having even without a dip of the tangy tartar sauce. The three large chunks of fish were a healthy portion. I preferred the drunken shellfish soup, with clams, mussels, scallops, shrimp, and calamari in a white wine broth with fennel. This was served with smoky grilled sourdough for dipping, but I might prefer a lump of white rice so I could get every drop of broth. 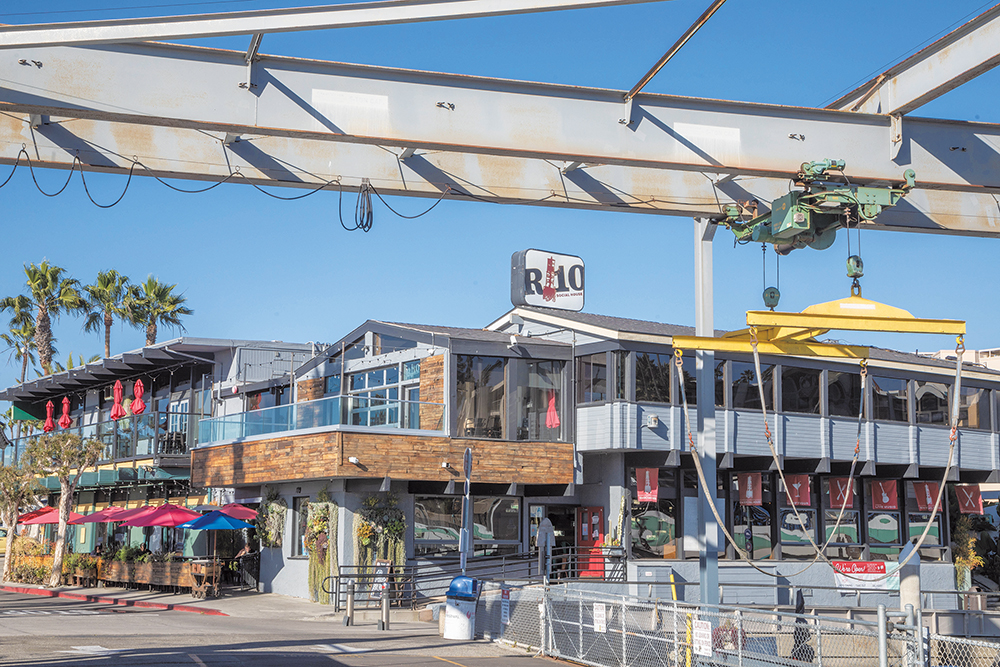 If you forget the name, R10 Social House is the restaurant by the boat lift in the Redondo Beach Marina

Only one dessert was offered, apple fritters, which came with a sweet berry coulis and a stiff chocolate ganache that had a great flavor but was awkward to eat unless you cut each warm dough ball in half, and put it inside to melt. A more liquid, bittersweet chocolate sauce would be more practical, as long as the flavor pairing is still similar.

Dinner for two with two drinks, a marina view, and excellent service ran just over a hundred bucks, which we found entirely reasonable. We went back for a weekend brunch and sat at the same table on an unexpectedly cool morning and watched a procession of bicyclists arrive at R10 shortly after we did. The bike path is only a few yards away and this is apparently a favorite meeting spot for the two-wheel crowd.

We ordered coffee, which was mediocre but served in unlimited quantities, a crab and avocado toast, and a pork belly benedict. The mashed avocado on the toast had a strong citrusy flavor that paired well with the buttered crab, tomato, and arugula on the sourdough. My wife liked it as it was, but I thought it needed a bit of something else to complete the flavor, a dash of pepper or cumin.

I preferred the pork belly benedict, in which the meat was cured and roasted, rather than the slow-cooked style that melts out all the fat. This went nicely with the hollandaise, and a sprinkle of paprika on top of the eggs finished the dish nicely. I had asked for the accompanying home fries crisp rather than soft and they obliged by tossing them in the deep fryer, which wasn’t what I expected, but worked out okay, anyway.

Their brunch drinks menu includes Bloody Mary and mimosa variations. We tried a “Mariner’s Mimosa” with elderflower liqueur, grapefruit juice, and hibiscus, and the R10 mimosa with Grand Marnier and mint accompanying the traditional Champagne and orange juice. Of the two I preferred the Mariner’s thanks to the harmony of juices, but I’d have either again.

R10 is an unpretentious place for solid American bistro food by the beach, and it’s a bargain for the location and quality of the experience. If that sounds like your kind of place, next time you’re about to pass it on your way somewhere else, you should consider stopping in.