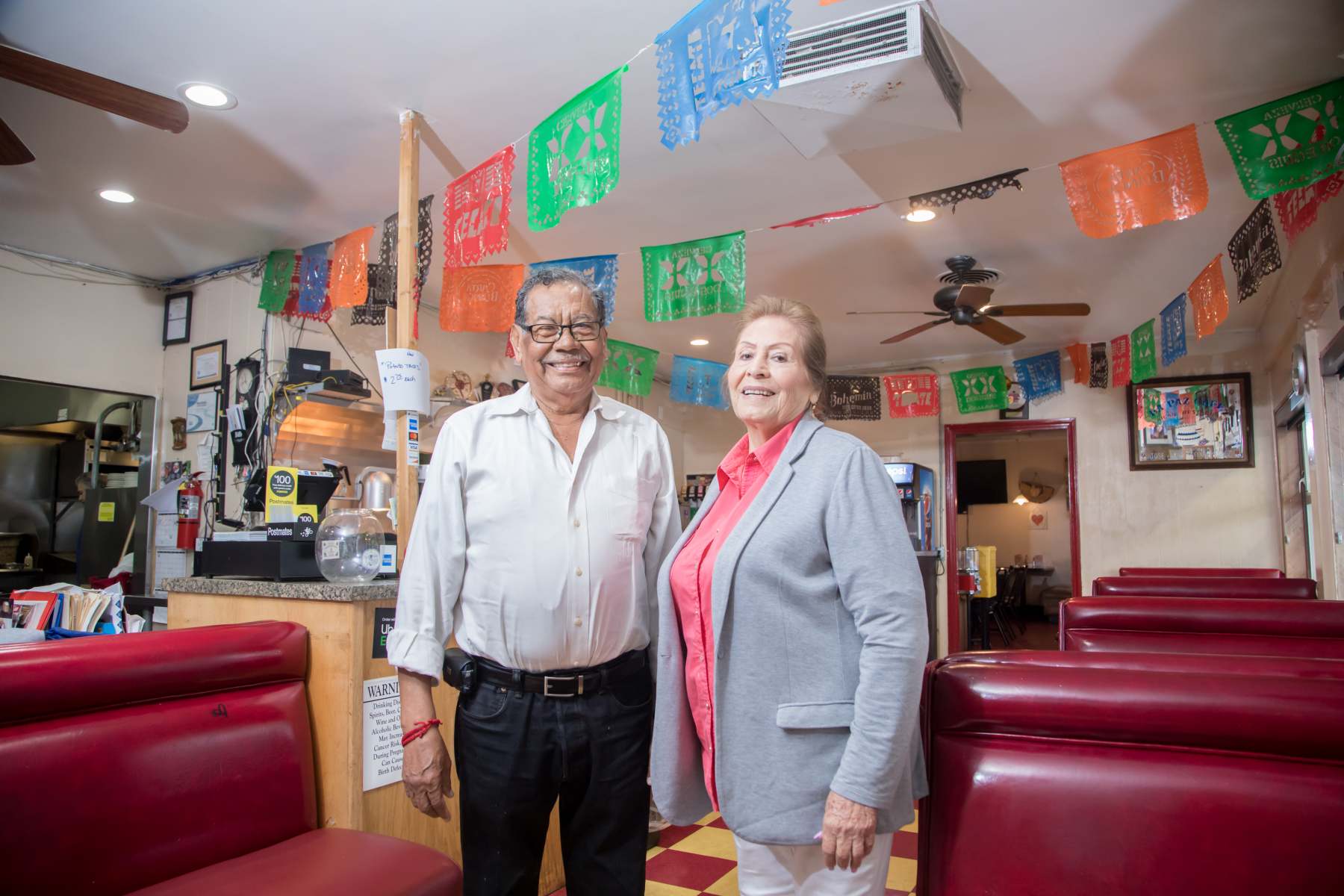 NOTE: This review was written before restaurants were closed due to the virus. La Paz remains open for take out.

Most people have a restaurant that they go to almost by default. It’s that place like home, except at home people expect you to cook and do the dishes. Restaurants that fit that category aren’t fancy or pretentious, and they aren’t expensive either. In some cases a meal there is cheaper than buying the ingredients yourself.

La Paz has been the go-to spot for everyday Mexican chow in El Segundo since 1976, though for decades they were on Main Street near the fire station. They moved to a new location in a small shopping center on Center Street in 2011, which seemed a strange decision at the time. Visibility from the street is almost nonexistent, but they made the bet their clientele would follow them, and they were right. The new location has plenty of free parking, which is enough of a rarity in this town to make it a separate attraction. The place looks a lot like a diner, but with a mix of old pictures of the city and Mexican bric-a-brac to give it plenty of character.

The menu doesn’t have much originality – think of any Mexican restaurant staple and you can bet it’s listed. This is not the place to come if you’re looking for arcane regional specialties or inventive creations, but it’s exactly the right place when you want comfort food that includes sauce, beans, and cheese.

Whichever of the entrees you pick, you probably should order a cup of their albondigas soup as a starter. The meatballs with herbal seasoning are in a gently spicy broth with carrots, onions, bell peppers, and squash. You could easily make a meal of it, and many people do. On a recent visit we were joined by a friend visiting from North Carolina, a state not noted for Mexican food, and I incautiously offered him a taste of my albondigas while I snacked on cheese and chips. When I looked up again the soup was gone, and he looked mildly sheepish. I didn’t mind, because I could come back anytime and get more while he will have to wait for his next trip to California.

Besides the cheese and chips, we ordered a pork tamale as a starter. Most places serve these in the cornhusk or banana leaf in which they were steamed, but here that is removed and the tamale arrives under a layer of mild red sauce with cheese. There is a little bit of a spicier sauce inside the tamale with the pork, so there are several layers of flavor to savor. I recommend getting one of these as a starter or side dish and saving some of your chips to scoop up that red sauce. It would be a shame to waste it.

For our main items we ordered chicken tamales, shrimp costa azul, and a “Manny’s burrito,” which was filled with chicken breast, spinach, squash, corn, and pico de gallo. That burrito is served unsauced, and has mild seasonings inside so that the vegetables are not overwhelmed. If you enjoy natural flavors subtly enhanced, this is the thing to try here. 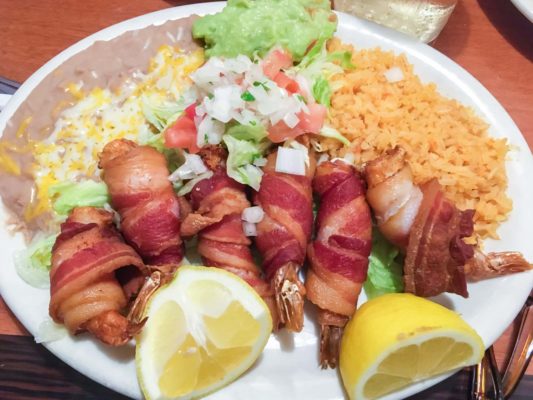 I had been curious about the shrimp costa azul, which wasn’t described on the menu but is another name for shrimp wrapped in bacon and grilled. Depending on where you are in Mexico and how fancy the restaurant is, these can be stuffed with crab meat, jalapeños, or cheese. Here they went for the cheese. There isn’t much to say beyond the fact that if you like bacon, shrimp, and cheese, you are going to enjoy this. You get the crunch and smokiness of bacon and the mild seafood flavor and texture of shrimp, so what could possibly make that better except maybe cheese? It’s served with beans topped with more cheese and some mild Spanish rice, a scoop of guacamole, and some lemon slices. A little squeeze of lemon does enhance things a bit by cutting the fattiness of the bacon, but I didn’t find that out until I had already devoured most of them.

The only item that we were less than satisfied with on this trip were the chicken enchiladas, because they came with an unusually small portion of the tangy green tomatillo sauce. To me that’s what makes the dish, and I mentioned this deficiency to the manager when I was paying the bill. She apologized and volunteered that the next time I ordered these it would be on the house. This wasn’t something she needed to do, because I hadn’t been complaining but just suggesting that they add more in the future, but I certainly appreciated the customer service attitude.

On other visits here I tried a chicken tostada and their carnitas plate, both of which were satisfying comfort food. The tostadas are over a crispy corn tortilla rather than in a flour tortilla bowl, and the carnitas have a mix of tender interior pork meat with the crispy bits from the outside, and in both cases that’s just how I like it. The tostada had plenty of guacamole on top rather than just a dab, and that’s good in my book, too.

La Paz serves basic red or white wine and has a selection of American and Mexican beers along with a variety of soft drinks. In keeping with the low-key nature of the place, there’s nothing here that is going to excite a beer snob, but if you want a Tecate or Dos Equis to help wash down dinner, it’s here and it’s cold. Only after I had finished my meal did I discover they now serve fresh fried churros, one of my favorite desserts. I’ll have to come back and try that on another trip, which is certain to happen the next time a burrito craving hits.