“A Perfect Day” – a sense of irony [MOVIE REVIEW] 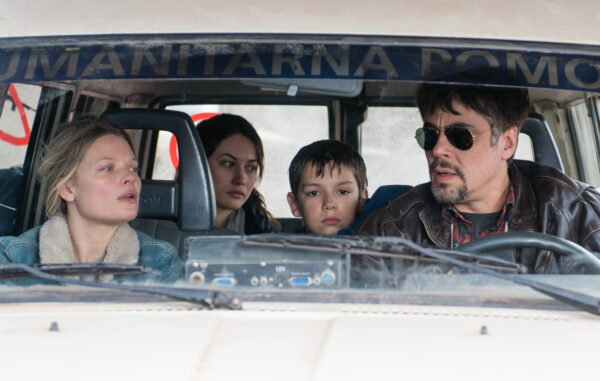 “A Perfect Day” is a truly international co-production directed by Fernando León de Aranoa and written by Aranoa and Diego Farias. De Aranoa also served as one of the producers, indicating how passionately he felt about this project that illustrates the political, logistical and emotional difficulties encountered every day by a group of international humanitarian aid workers trying to sort through the chaos of the Balkan war and bring much needed assistance. They run into roadblocks at every turn, whether from UN soldiers, local warring factions, Serbian soldiers secretly still carrying on their Bosnian genocide despite a cease fire or even aid workers within their own group.

Aranoa assembled an all-star cast including Benicio del Toro, Tim Robbins, Spanish/French actor Sergi Lopez, Russian beauty Olga Kurylenko, Bosnian Fedja Stukan and French rising star Mélanie Thierry. Certainly missions such as the one portrayed here are peopled with zealous missionaries, misfits and bureaucrats such as these, although probably not as telegenic.

Mambrú, portrayed by the very charismatic del Toro, is on one of his last tours. He is tasked with trying to mentor the very emotional newbie Sophie (Thierry) before he returns home. Sophie has the zealotry often found in the idealistic and is single-minded in her vision. A water expert, she realizes instantly that the corpse that has been discovered in a village’s well has made it undrinkable and a potential source of infection. Her only goal is to get the body removed and the water processed. That there are other, equally important tasks awaiting them is of no consequence to her and this uncompromising attitude in the face of denial only increases the insurmountability of her goal. Mambrú’s life is further complicated by the arrival of Katya (Kurylenko), his former lover. Add to this mix “B,” who, able to leap tall buildings in a single bound, or at least he thinks he can, is a hot dog and rogue humanitarian. He is accompanied by his resigned interpreter Damir (Stukan).

Slow getting off the ground as Aranoa attempts to build character, although no one ever really rises above archetype, the film begins to improve as the stakes are more clearly illustrated and the internecine politics rear their heads. Sadly, as with many passion projects, Aranoa goes off in too many directions with too many characters and to little structure. Originally a documentary filmmaker, Aranoa is lacking in the story structure necessary to build tension, both internally between characters and externally from physical threat. That the tension exists keeps the film moving, just not moving fast or purposefully enough.

Alex Catalán’s cinematography is first rate as he captures both the breathtaking beauty of the landscape when seen from afar and the sordid reality of the open wound that the villages have become.

Benicio del Toro was an inspired choice to lead the cast for even in an underdeveloped script his charisma carries him through. When onscreen, you only see him regardless of the beauty of his female costars. Mélanie Thierry, annoying throughout most of the film, finds the character growth necessary to go from rigid to sympathetic. Fedja Stukan is a marvel of sadness and pragmatism. Like del Toro, he is able to find depth in his character with very little dialogue, dialogue that is often clichéd and awkward.

Robbins has been better in other films, much better in most of his other films. He is the cowboy without depth or motivation and uses volume to convey his personality. Some of this may not be his fault because character development and dialogue were clearly not on the page. The same can be said of Kurylenko, although I’ve seen none of her other films. It is apparent that Lopez was put into the film to attract an audience acquainted with his reputation as an actor; certainly that was me when I saw the credits. Alas, he has little to say and nothing to do.

As stated earlier, Aranoa obviously feels very strongly about this subject and would like the audience to as well. We should all feel strongly about the people who risk their lives for very little pay to make other lives better in war zones and keep an eye on all the factions that endanger the innocent. Like in all films, it starts with the script and this script was a non-starter throughout most of its 100+ minutes.

Despite these reservations, it still has a point of view and watchable moments. Perhaps it would be more recommended on VOD than in the theater.

Now Playing at the Sundance Sunset Theater in West Hollywood and on VOD.