A walk through abstract expressionism 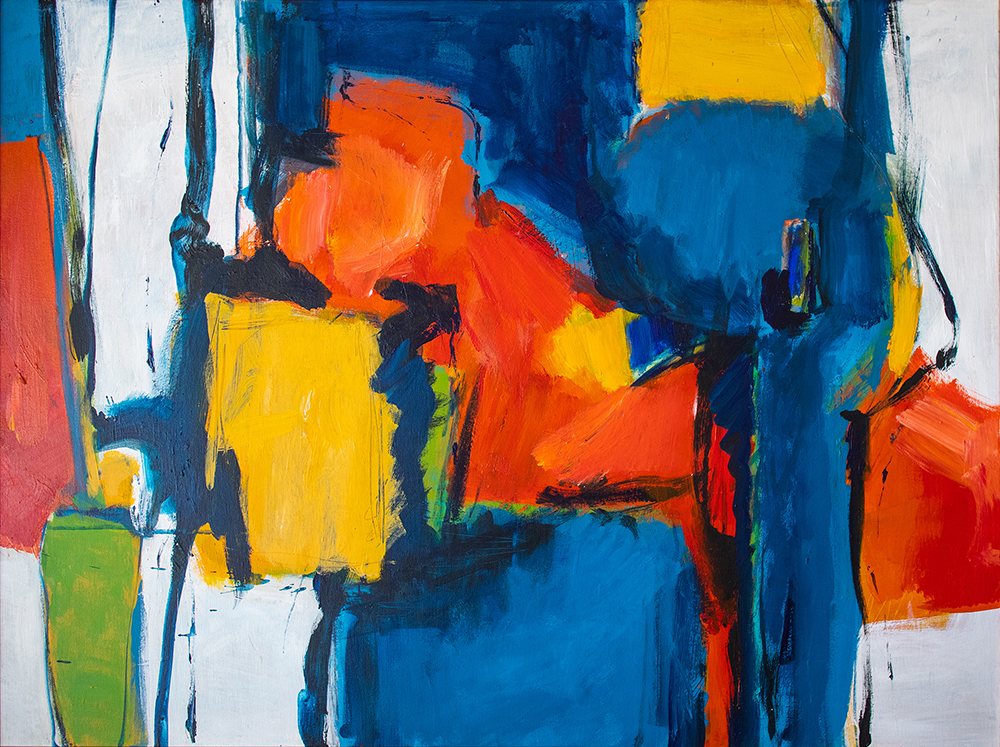 And so let us begin, in medias res, with Adolph Gottlieb coming out from New York and teaching a graduate art class at UCLA. Gottlieb (1903-1974) is still hailed as one of the masters of abstract expressionism, and one of his students that year, Dael Patton, had thus far been doing representational work and teaching. She’d already earned a Masters in painting, had been working in oil, but was moving into acrylic. Gottlieb was creating pictures in a style with which Patton was largely unfamiliar. And for an artist, that can be all the more reason to jump in and try something new.

However, Gottlieb may not have been very good at verbally expressing himself. During what was probably a six-week course there’s just one thing that stands out in Patton’s memory: “He had a big white surface on a board and he came in with a big black marker. He put a couple of ‘X’s and a couple of ‘O’s on it and he said (in his thick Russian-Jewish accent), ‘That’s what I’m talking about.’ And then he left.”

By the end of the course, if not sooner, half of Gottlieb’s students had also left.

“I learned something by staying,” Patton says, “because”—despite her degrees and teaching credentials—“I learned what I didn’t know.” But to reach that point of knowing wasn’t easy. Many people never will, although in principle, as William C. Agee explained in an essay about Arthur Dove, “the basis of abstract art is the elimination of the nonessential, the seeking of the simple motif.”

“I can’t get this,” Patton said to herself. A common enough refrain, to this day, is along the lines of ‘My four-year-old niece could do that.’ But Patton’s attitude was different, and more resolute: “I’m going to hang in there and get it; I’m going to continue this.”

Not long afterwards, Patton took a six-months sabbatical and signed up for three graduate classes at UCLA. Even though she says she learned “more about painting,” none of the courses were focused on abstract expressionism.

So how does one ford this artistic river and get to the heart of the matter? 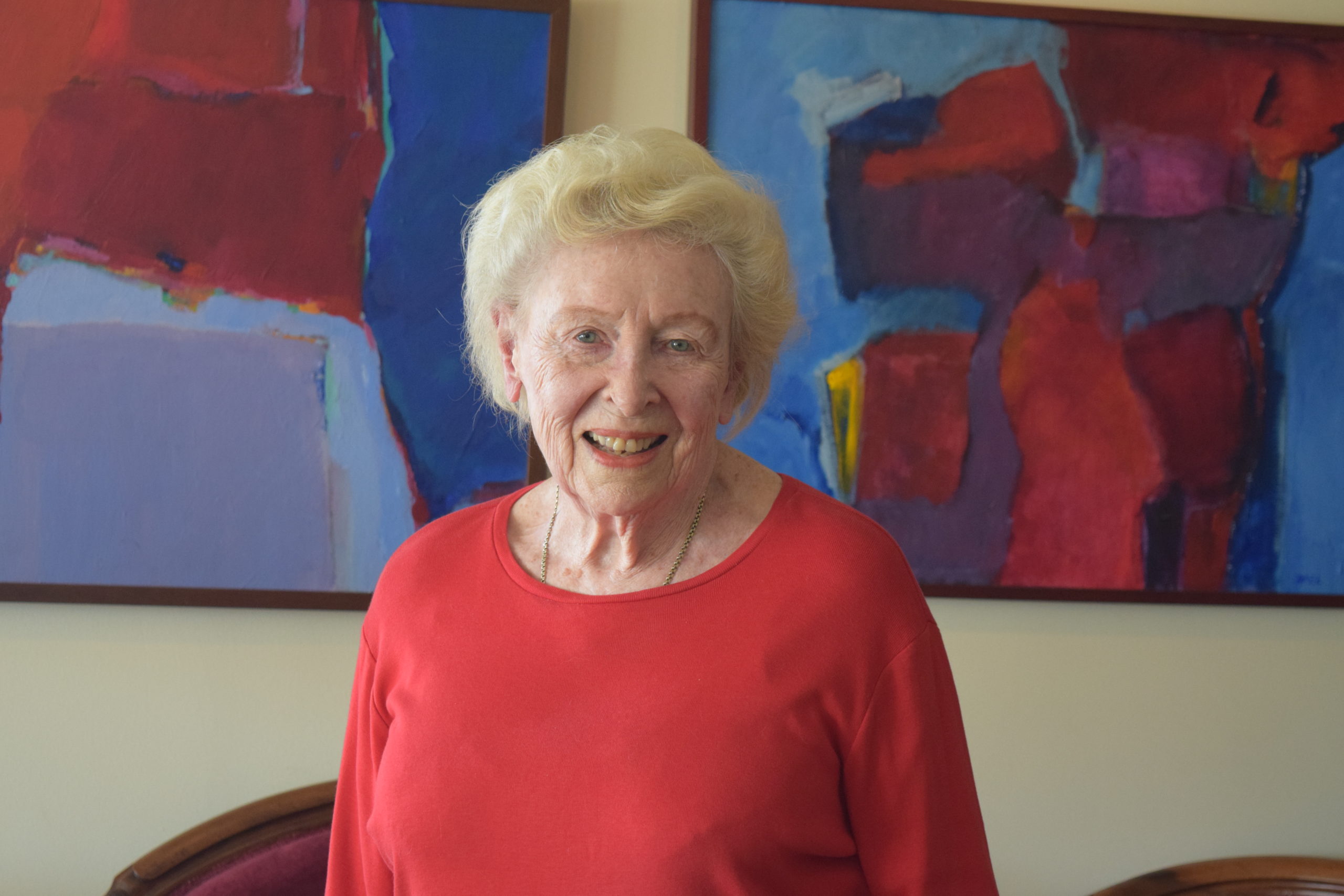 “Most people overshoot the mark,” she continues. “They think it’s this esoteric thing. It’s the basic art principles, period: Color. Texture. Shape. Design. Composition. Materials. Surface. Paint: it can be ink, can be oil, can be acrylic; it can be anything. But the art elements are the subject matter.”

However, it may not seem so simple to the people who sign up for Patton’s abstract mixed media class at the Palos Verdes Art Center, most of whom have been working in oil and painting in a representational style.

“They come in and I say, ‘Calm down, ‘cause I know just how you feel: I beat my head against the wall for a long, long time, so just calm down. You can do whatever you want. I’m here to nudge you and to help you do what you want to do better. That’s all.”

Well, not quite all. Patton also helps her students realize what it is they want to express. Additionally, she suggests that they try painting in acrylic, “because if you screw up you can paint over it in three minutes.”

One buys into this or one doesn’t. For those who do, she adds, “I’ll take you slowly; you don’t have to dive off the high-dive. You can slip over the side of the pool and float a little bit.” 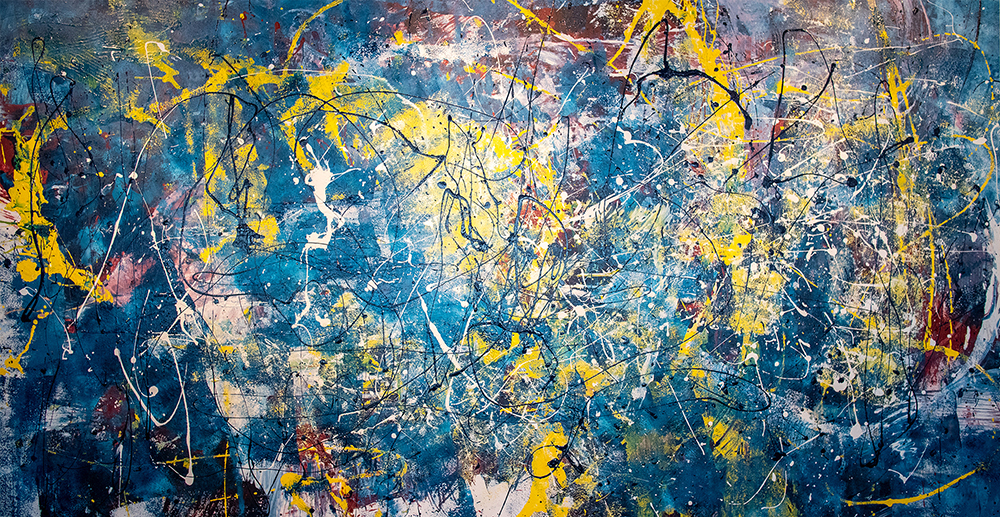 From there to here

“I’m the same age as the Art Center,” Dael Patton says with a laugh. She was born in New York in 1931 and turns 89 in November. At the age of 18 months she came to California with her mother and her great aunt and uncle. No, they didn’t hop on a plane or motor across in an RV, but sailed on the Cunard Line through the Panama Canal. Patton’s father, Clark Watson, was a watercolor landscape painter and cartoonist who had come out first to Hollywood where he would end up working for Walt Disney for about five or six years.

This was where Patton grew up. After graduating from high school she spent six months in London with her grandparents, and at night studied figure drawing at St. Martin’s Art College. There were more art classes after her return to Los Angeles, and one well known artist whom she met, when he was teaching at the Idyllwild School of Music and the Arts, was Harry Sternberg.

“He was my painting guru,” Patton says. “Harry is most famous for his printmaking, but he should have been known as a colorist.” He’s also remembered “for going down in the mines and drawing the miners coming up and then doing these beautiful woodcuts.”

Eventually, although she never ceased painting, Patton embarked on a lifetime of teaching, and at every level of education, including prisons. Her second marriage produced two sons: “Dave’s a captain in the Manhattan Beach Fire Department and Steve is a successful entrepreneur with a company he founded himself.”

Patton now lives in a roomy condo just shy of Malaga Cove, at the southernmost tip of Redondo Beach. It’s where we sat down to talk, on the Fourth of July. 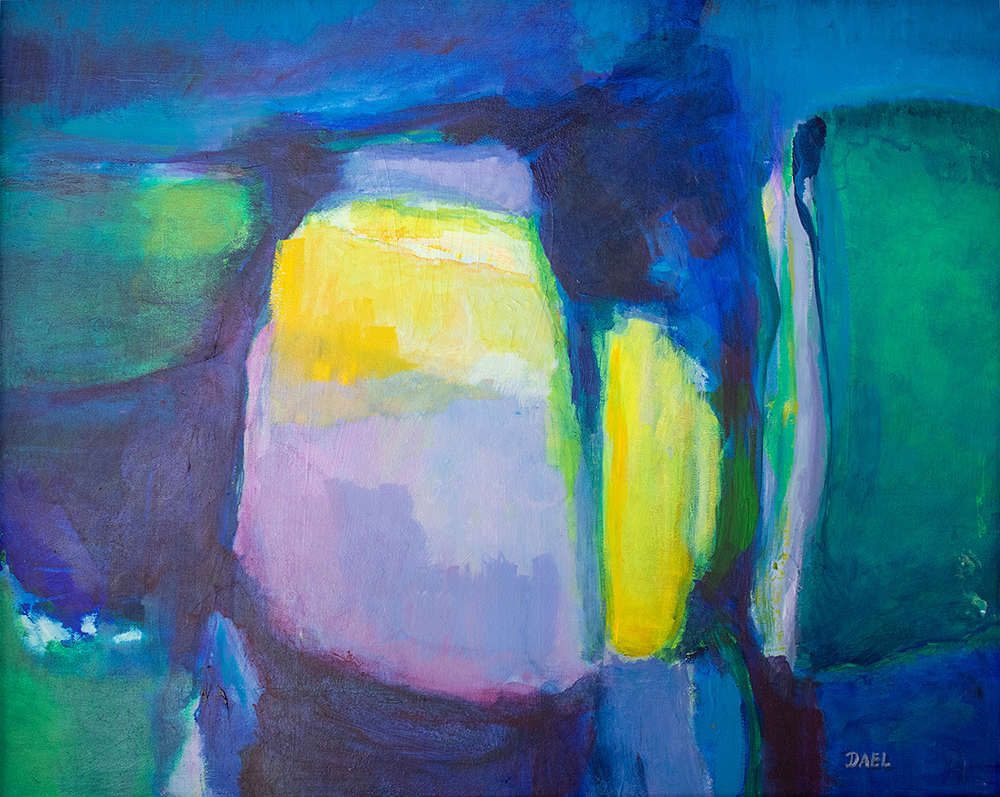 Putting down the brush?

How do you know you’ve reached the point where the work is finished?

“You don’t, and you never do,” Patton replies. “And anyone who tells you that you do is lying. But there is a time when there is a little feeling of satisfaction: ‘Well, it may not be the best thing I’ve ever done, it may not be the greatest painting ever painted, but I feel like it’s okay.’

“It’s very important to not get your expectations so high,” she continues, because “then you’re your own worst enemy, and many of us usually are. You can criticize your own work until you’ve completely obliterated it and you’ve painted seven paintings on top of it.” She pauses. “Paint six more paintings, but don’t mess with this one anymore.”

Patton points to several of her own works on the walls around us and notes that, even though these are pictures she’s pleased with, “there’s some things I don’t like. But you have to learn to accept that and move on.”

She’s not wrong when she adds that we are often our own worst critic. “There’s always this little creature that sits on your shoulder,” and it whispers in our ear: “What do you think you’re doing? You’re not that good, you never were; not now, you never will be. What are you doing?” Patton then flicks her finger as if shooing away that imp of self-doubt.

When she starts to paint, Patton relies on intuition:

“I just let it speak to me, it has to be like a dance. [The closest] I come to a plan is something very large or something small.” As she works she’ll often turn the picture this way and that. It’s a good way for her to test the composition, viewing it from every angle, every side. 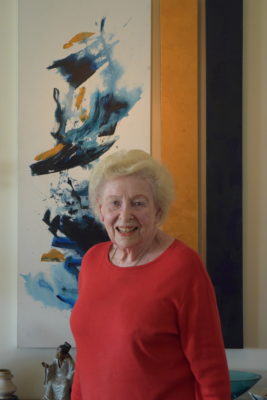 When the roads converge

Patton, who was the eldest of four daughters, says that her family was not well off financially. “So I decided I wanted a steady income. When you grow up you learn the world is not waiting out there for you to step in and get all these goodies.”

So she made up her mind to go to school, earn a degree, and become a teacher. Since art was what she liked best, and could already do it well, this was where she applied herself.

Whatever one sees on the surface, there are competing forces pulling from within. On one side is financial security and on the other artistic freedom and accomplishment.

Her painting guru, Harry Sternberg, suggested that she take off a couple of years and go to Italy and paint. And if not that, then New York. “He was so encouraging,” Patton says, “but I was scared to not have any money, ‘cause I had lived that way for so long. I didn’t want to do that. I needed the security.”

So she got her teaching credentials, and later her Masters degree. She’d made her choice.
“By doing that, my development as a painter suffered. Some people think I’m really hot, and sometimes I do some really good stuff. I’m pleased, very pleased basically, with what I’ve produced, but I could have done more. I could have been a lot better.”

In the end, did it pay off for her? In certain ways, undoubtedly. Patton appears to have lived a full and rewarding life and has enriched the lives of thousands of others. “Actually, I think I’m a better teacher than I am a painter, because I’ve done more of it. I’ve taught most all of my life and have spent more of my energy and time in education and art education. But I was a good painter.”

I can’t say for sure, and it’s only a guess, but perhaps there is some regret, some ‘what if?’ in those last six words. The other road. Where might it have taken her? 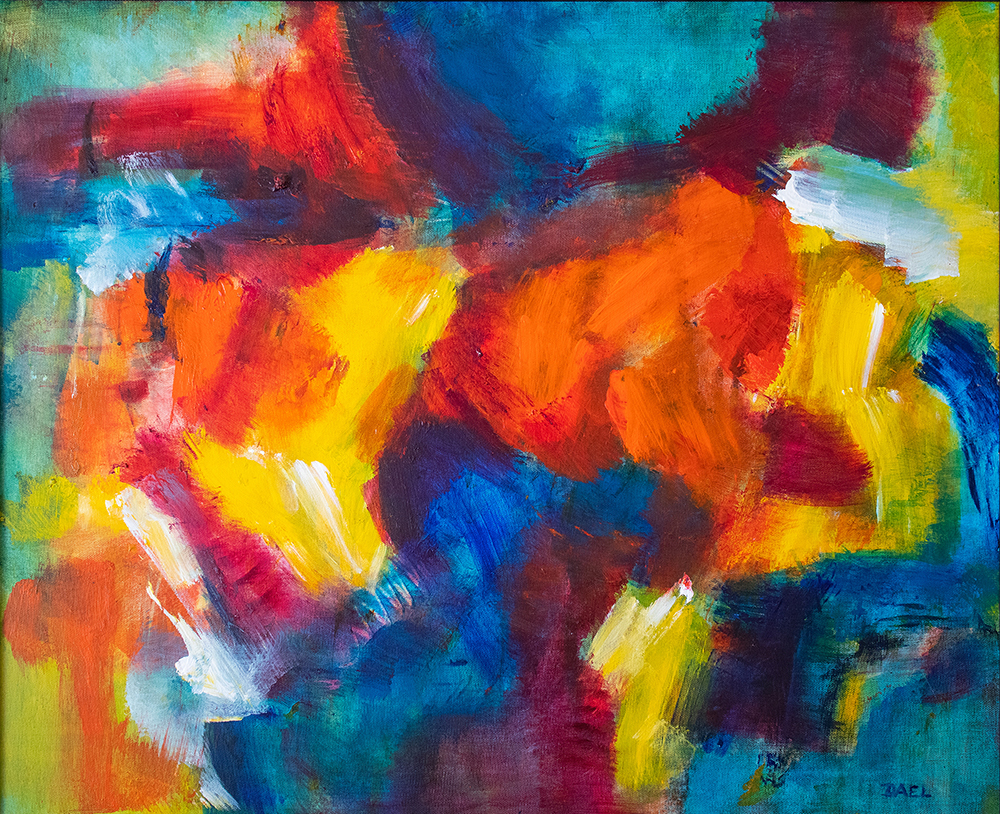 “Coming Together,” by Dael Patton

Dael Patton has been teaching at the Palos Verdes Art Center since 2004. “She has an incredible amount of stamina for her age and is just such a positive force,” the Center’s executive director, Daniela Saxa-Kaneko, replied after I mentioned I was writing this story. “Her classes fill up on the first day of registration and often there is a waiting list as well. She is as vibrant and uplifting as her paintings, and we are lucky to have her on our faculty.”

“We lost all of the spring semester,” Patton says. “They were going to reopen for summer, and we’ve lost all summer.”

Will PVAC open later this year?

“As far as the fall term goes,” says Saxa-Kaneko, “we would love to resume our classes on Sept. 14. However, with the recent re-closures, I have a feeling that may not happen. I am not even sure we will be able to open our galleries at that time.”

Like all of us in the local arts community, we wait and we wait, and we hope. Patton is ready to return to her teaching as soon as it’s deemed safe to do so. She limits her classes to about 16 students because “I work very hard at it” and, where each student is concerned, “I want to distribute whatever energies I have as fairly and as needed as possible.”

With this kind of individual attention, and from an informed, knowledgeable instructor who herself has mastered the craft, it should surprise no one that Dael Patton is so admired and respected. Yes, she’s a real treasure. ER