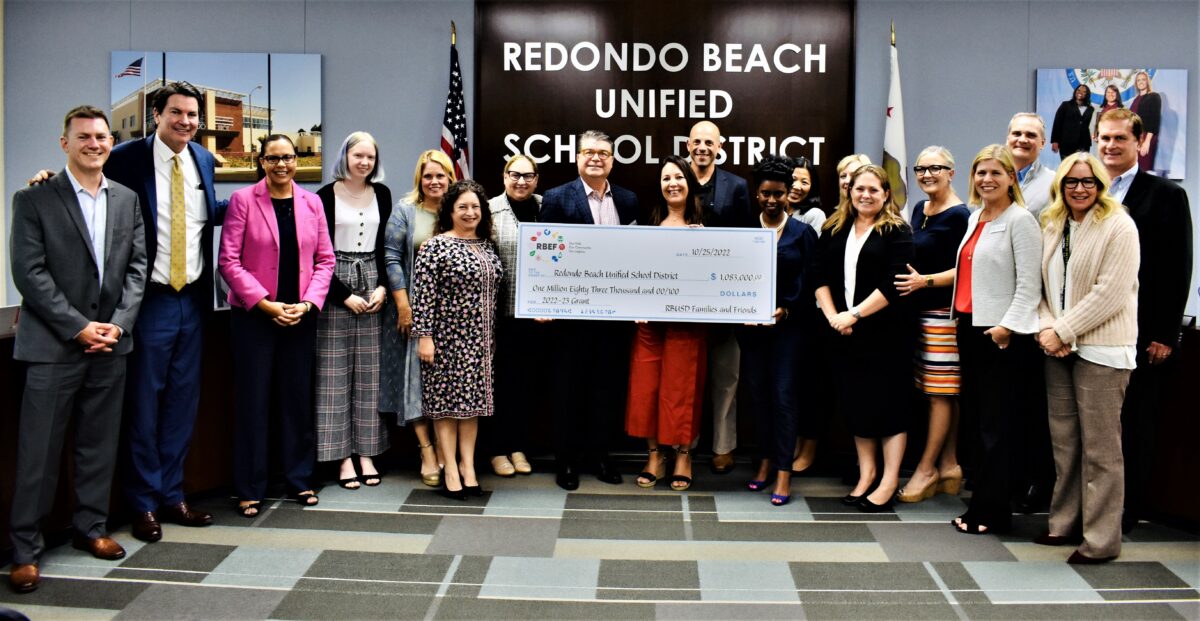 School board members, district staff and RBEF representatives gather Oct. 25, during a regular board meeting, for presentation of the check. Photo courtesy RBEF

A refurbishment of the high school library tops the list of items for the 2022-23 donation from the Redondo Beach Education Foundation, presented Oct. 25.

This year’s gift of $1,083,000  funded everything the Redondo Unified School District asked for.

The list focuses on district-wide uses, including the revamp of the RUHS library, to create more private study areas and collaborative spaces.

The gift comes from corporate and foundation partners  – and includes more than $800,000 in donations from local residents, representing 10 percent of Redondo Unified families.

“It truly is a community effort,” said Bieber, who has a five-year goal to bring in more than $1 million from district families in a given year.

A former contract grant writer for RBEF and site advocate, Bieber is a member of the RUHS class of 1993, now a mother of two students in the district.

The Redondo Beach city council held the first of a two-part public hearing Nov. 1 for its plans to put a  measure on the March 7 ballot next year to decide taxes for coming marijuana shops.

The businesses — yet to be permitted — would pay a sales tax of three to nine percent on cannabis and one to three percent on consumable hemp. Businesses would pay these taxes, not customers.

Voters, in the ballot measure, would decide the rate.

The two Redondo Beach stores will be allowed to deliver in town, with these sales taxed at the same three to nine percent rate.

Businesses would pay cannabis taxes to the city monthly byway of gross receipts. A five percent developer’s fee would apply to any businesses operating before the ballot measure takes effect. The tax set by voters would supplant the developer’s fee.

The city council was set to resume the public hearing Tuesday night.

Final turnout for the Oct. 19 Redondo Beach special election came in at 30 percent of registered voters, and 33 percent in District Four, which had both a potential recall of its city councilman Zein Obagi, Jr., and Measure E on the ballot.

The Oct. 19 turnout was higher than the last Redondo municipal election in March 2021, which was 27 percent across the city.

“It was a fantastic turnout,” said Mayor Pro-Tem Nils Nehrenheim at a regular city council meeting Nov. 1. “I want to thank everyone for showing up and voting on a special election.”

The Oct. 19 ballot was set by a split city council vote this summer, with Mayor Bill Brand breaking the tie. The Obagi recall would otherwise have gone before voters Nov. 8 and Measure E next March.

Usual turnout for recent (federal) November elections in Redondo Beach run in percentages in the 60s to 80s, according to Los Angeles County Elections.

In November 2020, a particularly high-interest presidential year, 42,065 ballots were cast in the city, for 85 percent. Numbers were not available at presstime for this week’s 2022 federal election.

In an Easy Reader study after 2016, the four previous election cycles showed a Redondo Beach turnout of 28 percent for municipal elections. Federal elections here had an average of 65 percent.ER