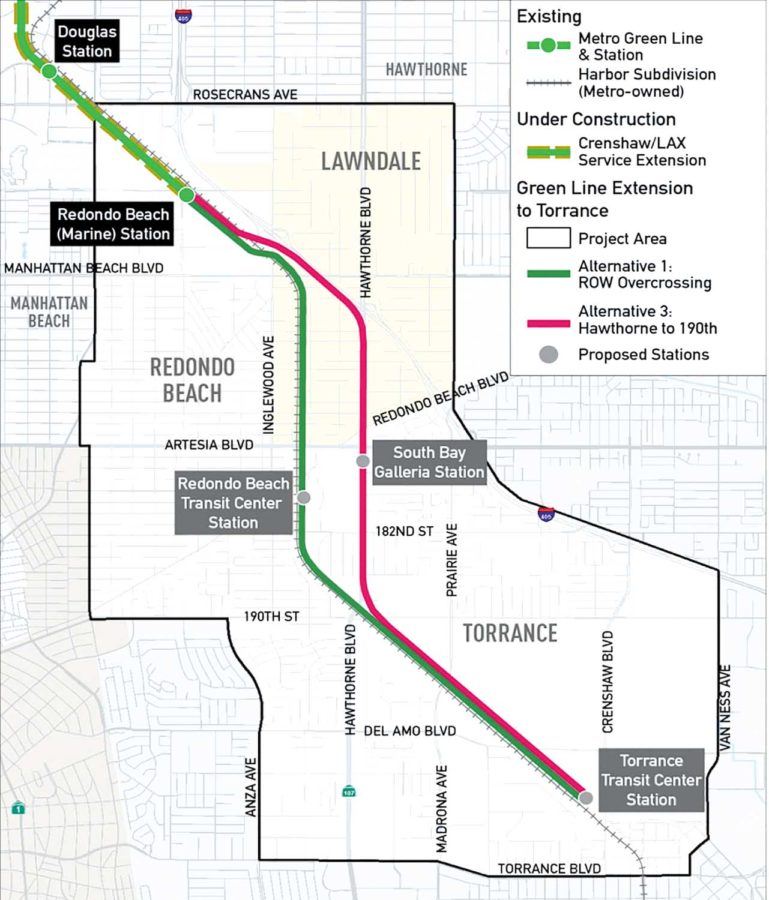 A diagram of the two proposed Green Line extension routes. Courtesy of Metro

A Metro meeting to gather more public feedback on the proposed Green Line extension is set for Thursday, Aug. 11, at Adams Middle School from 6 p.m. – 8 p.m.

The Green Line extension is slated to take one of two routes; elevated along Hawthorne Boulevard, or along an existing railroad right-of-way next to Inglewood Avenue, from Manhattan Beach Boulevard to 190th Street.

Redondo Beach Mayor Bill Brand has expressed his opposition to the railroad right-of-way option to County Supervisor Holly Mitchell, who is on the Metro board.

District Four City Councilman Zein Obagi, Jr., has made a call for “civility guidelines” on the council.

Speaking at Tuesday night’s meeting, he told of how he drove back to San Diego following the meeting two weeks ago, after midnight, because the council lacked the quorum needed for a vote to put his recall and the cannabis ordinance on the Oct. 19 ballot.

Councilman Christian Horvath had left the meeting in protest, as did Councilwoman Laura Emdee, who hoped to prevent a vote on the special election.

“A civil litigation is more civil than how this council is conducted,” Obagi, an attorney, said Tuesday night.

He also objected to his name appearing multiple times in a fellow council person’s newsletter (Emdee’s), in which she linked Obagi’s recall vote to the public cannabis initiative.

Obagi suggested the council draw up civility guidelines, starting with, “if you don’t have anything nice to say, don’t say anything at all.”

The Los Angeles Homeless Services Authority (LAHSA) has announced a delay in the release of the 2022 Greater L.A. Homeless Count, including that of Redondo Beach.

Results will now come out in September.

In early July,  the federal department of Housing and Urban Development (HUD) told the LAHSA that validation of the data collected in the spring would not start until the week of July 18, which failed to allow enough time for LAHSA to release validated data by July 21 as planned.

After consideration, LAHSA opted to postpone the release of this year’s Homeless Count until HUD has finished its review. LAHSA is expected to receive validated data in late August, and plans to release the information in early September.

This year’s Count was delayed by the COVID-19 pandemic. To ensure the safety of its volunteers, LAHSA received permission from HUD to move its unsheltered count from January to February and received a one-month extension to late May to submit its data. ER