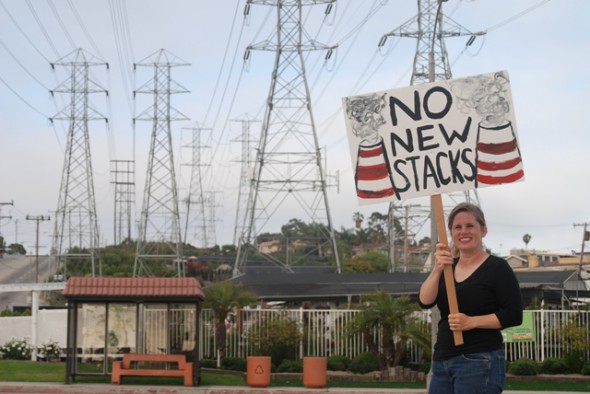 Protesters called for the removal of the AES Power Plant last Friday along Pacific Coast Highway. Photo by Walt Hyneman

The citizens group Building a Better Redondo last week launched an initiative effort aimed at rezoning the AES power plant site so that power generation would no longer be allowed beginning in 2020.

The “slow growth” group intends to gather signatures and place an initiative on a municipal ballot that would give voters the option to eliminate power generation as an accepted use at the AES site. BBR launched its campaign last Wednesday with an informational meeting at the Crowne Plaza Hotel and a rally along Pacific Coast Highway above the power plant on Friday.

“We are girding up for another battle,” said BBR president Jim Light. “…The clock is ticking on the timeline for residents to act.”

AES filed a plan with the State Water Control Resources Board in April signaling its intentions to rebuild its Redondo Beach plant. A state law passed last year requires power plants to almost entirely phase out the use of ocean water for cooling purposes by 2022. AES, which currently uses ocean water, filed an “implementation plan” to modernize its plant. The corporation applied for an extension for use of its current plant beyond 2022; construction of a new plant is scheduled to begin in 2015 and be completed by 2025.

Light said that residents have until October 2013 – when the plan will likely face final review for approval – to prevent a new power plant from being built.

“It’s a once in a lifetime opportunity to rid ourselves of this blight on our waterfront,” Light told about 60 residents gathered in a conference room at the Crowne Plaza Hotel on Wednesday evening.

Light, an engineer and former city council candidate who has been at odds with the city since 2002’s Heart of the City battle, has put together an 86-slide PowerPoint presentation that attempts to make the case for an initiative and against a power plant, which he described as one of the top 100 polluters in California and the biggest polluter in Redondo Beach.

The activist last year sued the city to force an election on new waterfront zoning that allowed for new commercial development in the harbor and continued to allow power generation at the AES site. The city’s proposed zoning, in the form of Measure G, prevailed at the polls and has already resulted in the submittal of a popular new development, the boutique Shade Hotel. The zoning, however, also included park space as an allowable use at the power plant site.

Light – who is still embroiled in a lawsuit with the city over nearly $400,000 in legal fees – has returned to battle to make a final push to create a public park on at least part the AES site. He cites the long history of park interest for that area, which was formerly a salt lake but was proposed as a park as early as the 1880s and repeatedly throughout the last century, according to Light.

He also cites a 2004 city planning document that recommended the possible rezoning of the AES site to eliminate power generation. The city report, which came on the heels of a multimillion dollar property tax dispute with AES, laid the groundwork for a legal case, citing the power plant’s uses as incompatible with its surrounding and causing blight and reduced land values to nearby homes.

Light acknowledged that a rezoning would likely entail litigation with AES.

“We should not let litigation and the threat of a lawsuit prevent us from what is right for the future generations of Redondo,” he said.

His audience was receptive. Mike Garcia, who owns an environmentally-oriented local landscaping firm, envisioned a future park that would be “the West Coast Central Park.”

“It’s going to bring birds, bring butterflies, bring nature and beauty back into the environment,” Garcia said. “You know what, we’ve got tons of condos.”

Councilman Steve Diels, who Light singled out as “in bed with AES” for taking campaign contributions from the corporation, suggested the better comparison would be with neighboring Hermosa Beach. A citizen initiative in Hermosa in the 1990s prevented an oil company from drilling. But that matter has been in the courts ever since, with the company – Macpherson Oil – winning a series of victories that threaten to bankrupt the city.

“We can’t take someone’s property without consequences,” Diels said. “That is what happened in Hermosa Beach, and they are about to go bankrupt as a result. It wouldn’t surprise me at all if Jim Light tried to make Redondo Beach go bankrupt. It’s a stupid idea and it has no chance to succeed.”

Diels, who noted that he’d opposed AES in several of its disputes with the city, said rezoning would infringe on AES’s property rights.

“You can’t just take someone’s property,” he said. “I don’t know what he is thinking. And every time AES goes before voters, they have won – not Jim Light. That is why he is delirious – if you want to ask what to do with property, ask the property owner, not Jim Light….When Jim Light tears down his own house and puts up a park, I’ll take him seriously.”

AES Southland president Eric Pendergraft said that much of Light’s presentation was based on “misinformation and inaccuracies” including the proposed footprint and height of a new plant and the suggestion that a desalinization plant would also be built on the site. He agreed, however, that a unique opportunity existed – to add new, public-serving uses to the site as the plant is downsized.

“Our plans are just getting off the ground,” Pendergraft said. “I think we have made a lot of progress in the city, and we have demonstrated we want to do the right thing and supported quite a few causes throughout the city. We are trying to be reasonable. My hope is that a large percentage of people in Redondo will wait to see what some of our thoughts and ideas are before coming after us, and only having in mind getting rid of us and having a park. There are a lot of things that can be done with that site. I just ask people to wait.”

Pendergraft placed the site’s value at about $350 million and said AES would be open to selling. Light said that some funding is available from the California State Coastal Conservancy.

“Provided the money is available, we would certainly be interested in talking about it, so long as we get fair value for our property and the lost opportunity associated with not moving forward [with power generation],” he said. “But given the state of the economy today, it’s hard to believe they’d be able to raise money in order to purchase from us.”

“Interestingly, the Air District’s plan for cleaning up the air is through electrification of the transportation fleet, which would result in more electricity production from power plants,” Pendergraft said. “This is because it is far cleaner to produce electricity from a power plant than it is to burn fossil fuels to power cars, trucks, planes, and other sources.”

Light said he is willing to meet with AES, but he and other BBR members are quickly building an initiative movement. They have launched a Facebook page, Tear Down Redondo’s Power Plant, and a blog titled “AESredondomustgo.com.”

“If we don’t start a decisive action now, it could be a fait accompli before we ever get started,” Light said.