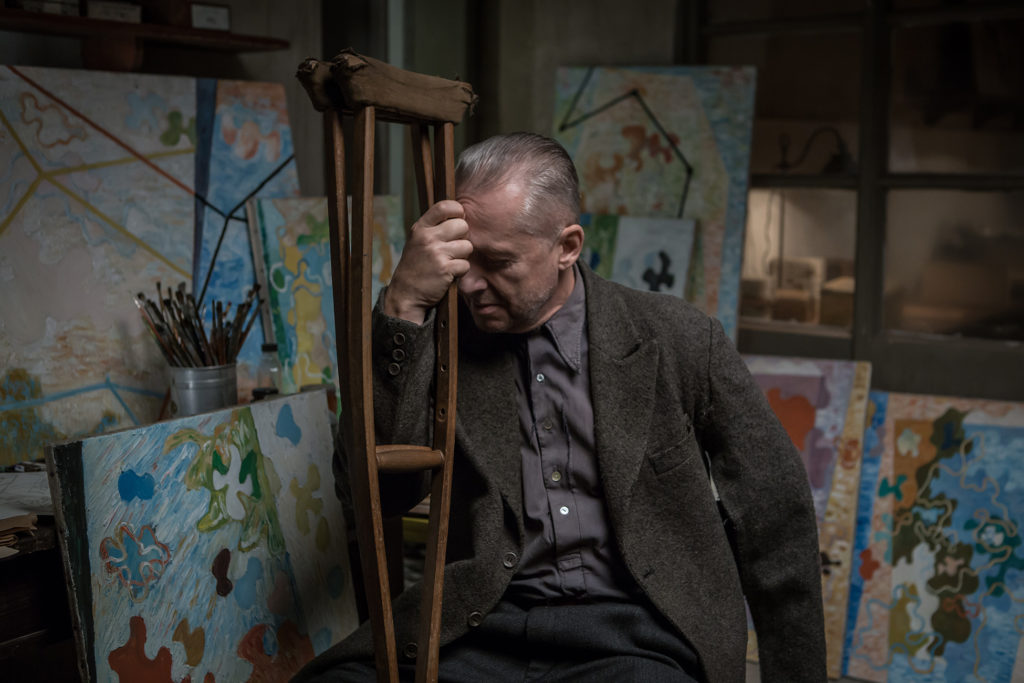 Boguslaw Linda in “Afterimage,” a film by Andrzej Wajda

“Afterimage,” the final film in the illustrious career of Andrzej Wajda, the winner of an honorary Academy Award in 2000, is ostensibly about Wladyslaw Strzeminski, the great Russian/Polish painter and one of the founders of the Constructivist movement in Poland, having worked alongside Kazimir Malevich in Russia. Moving from Russia to Lithuania and finally to Poland in the mid 1920s, he became a major artistic influence not only with his work but also with his teaching and theories on avant-garde art. A revolutionary as well as an artist, he was a leader in many of the political artistic organizations of his day and was recognized as an important artist internationally. Having finally settled in Lodz, Poland, he co-created the modern art collection of the art museum and co-founded the State Higher School of Visual Arts. In short, this was a man revered not just for his art but also for his influence as a teacher and political leader.

But that was between the Great Wars and the film, beginning in the late 40s is a very different era. No longer is there political choice in Poland and although Strzeminski was always a follower of the tenets of the revolution, having reached maturity in Lenin’s Russia, he chafes at dogma. But more importantly, and this is the true theme of the film, the dogma chafes at him. In this post World War II era of Communist rule, the loyal adherents of Stalin (and there is no choice in such adherence) must follow the Party’s dictates and that includes their demand that all art must conform to Socialist Realist Doctrine – all art must reflect the communist values that uplift society and show the emancipation of the proletariat in realistic depictions. Constructivism and modern non-figurative art was to be vilified along with the creators of such art.

Like other 20th Century totalitarian governments, the official devotion and dictate for Social Realism mirrors the Nazi vilification and elimination of so-called Degenerate Art (in essence, all modern art because of the irrational feeling that modernism was contaminated by Jews) in favor of realistic depictions of racial purity, militarism and Nazi doctrine, and the movement in the Chinese Cultural Revolution to eliminate any art that did not depict Mao’s glorious triumph over imperialism and elitist forces (even within his own party).

The eradication of Strzeminski’s overt influence was rapid and severe. First they fired him from the institute he founded; next they took away his art union card (a union he helped create) so that he could not even purchase paints or work in menial jobs as a decorator; and finally, they eliminated any avenue available to him to earn enough of a living to feed himself. But, like other heroes, stubborn, idealistic or foolish, he would not bend to the will of the government, choosing instead to continue secretly working on A Theory of Vision, one of his most important contributions to the study of art. It was not published until 1958, years after his death.

Working from a palette both muted and harsh, cinematographer Pawel Edelman has effectively juxtaposed the dreary and harsh everyday existence with the brightness of the modern art presented on screen. Especially jarring was a scene where students visit the wing of the modern art museum created by Strzeminski. It was so completely out of sync with the rest of the film that it seemed as though it was a flash forward to today. And that, exactly, is what the film showed best – the vibrancy of the art that was so counter to everything happening politically at that moment in time.

The acting was quite good overall, from the smitten student Hania, played by Zofia Wichlacz, to Bronislawa Zamachowska who played Strzeminski’s old-beyond-her-years young daughter, soldiering on, trying to adjust to the society that her father entirely rejects.  But it is famous Polish actor Boguslaw Linda who dazzles with his hidden volcano of emotion. His ability to portray his dilemma without exposition is a tribute to him as well as to writer Andrzej Mularczk and director Wajda. It’s a shame Linda has been seen so rarely in international films.

Strzeminski often talked of the “after image” effect in which the retina retains an image of what it has viewed long after it has been taken away. The story of Srzeminski, completed shortly before Wajda’s death is our after image.

In Polish with subtitles.

Opening Friday May 26 at the Laemmle Royal