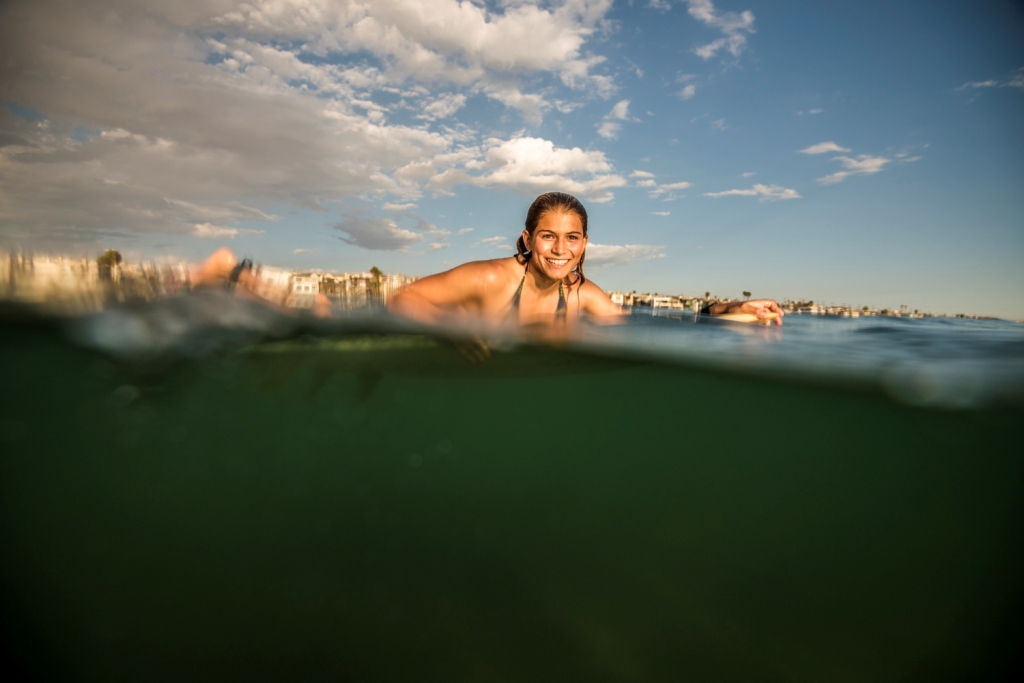 The hooting, hollering and whistling during the premier of “Age of Summer” on September 6 at the Hermosa Beach Community Theater was reminiscent of the late ‘60s when the theater was the Pier Avenue Junior High auditorium and a main stop along the coast for early surf filmmakers John Severson, Bruce Brown, Greg Noll and Mike Purpus.

Like those films, many of the surfers on the screen were in the audience getting razzed by their envious friends.

Unlike those films (with the obvious exception of “Endless Summer”), the “Age of Summer”’s ambitions extend well inland from the coast. The day after the screening, “Age of Summer” was released in theaters nationwide and on streaming services, including iTunes and Amazon. 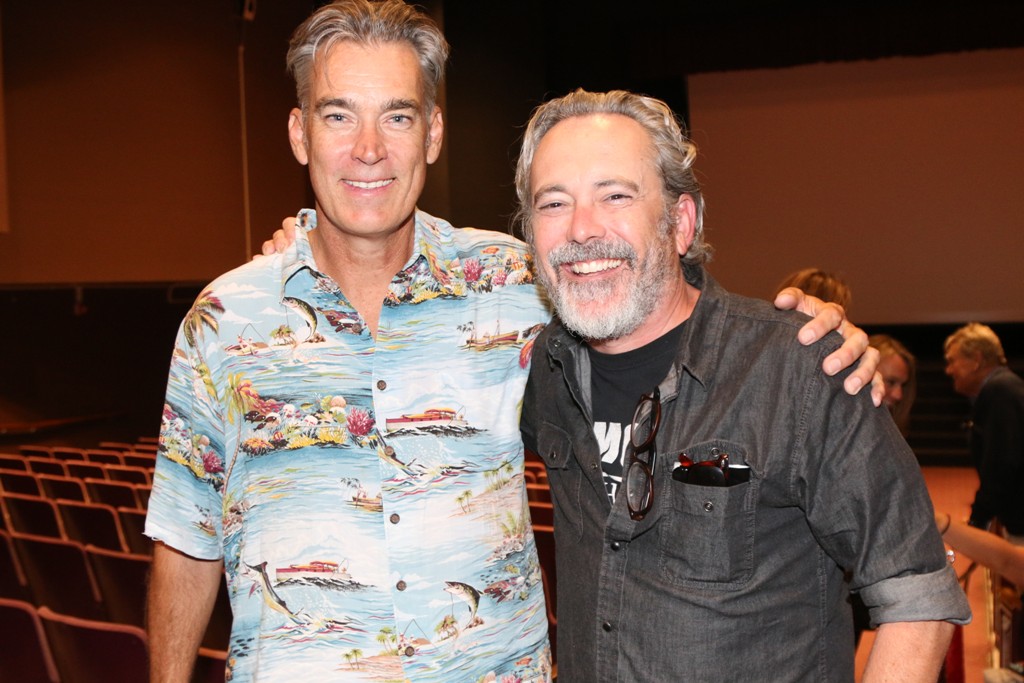 Director and co-writer Bill Kiely with co-writer David Harris at the premiere of “Age of Summer” at the Hermosa Beach Community Theater on September 6. Photo by Kevin Cody

The film is the directoral feature film debut of Bill Kiely, whose Windowseat Entertainment’s previous productions were documentaries and commercials.

Kiely co-wrote the film with David Harris, whom he met six years ago at a Hermosa Middle School teachers conference night, when their kids were in first grade. Harris is a screenwriter and was working on the ABC sitcom “Malibu Country.”

“We had similar sensibilities and decided to do something together,” Harris said.

Those shared sensibilities included a love of Hermosa Beach, which they recognized as a likely character in any collaboration. 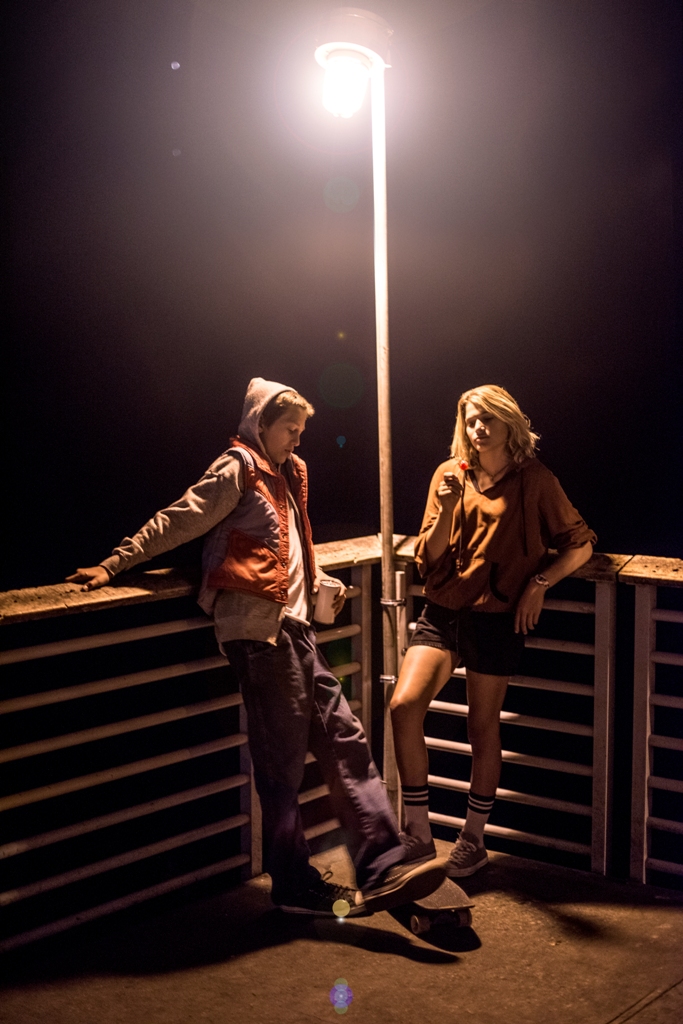 “I love filmmakers who make their town a character, like Richard Linklater with Austin (“Boyhood”) and, John Hughes with Chicago (“Ferris Bueller”).

“There’s an authenticity about Hermosa Beach. People march to their own drummer despite being so close to LA, where everyone is trying to be like everyone else,” Kiely said.

The two tried writing comedies, including one about a marijuana heist, but without success.

“We found it difficult because we were fans of great stuff and set the bar too high,” Kiely conceded. “Ultimately, we decided to write a coming of age story.”

The challenge, as with all storytelling, Harris said, was finding an entry.

“As kids, we both moved around a lot. We even lived in the same small Texas town, though at different times,” Harris said. “Everytime we moved to a new town, we were fish out of water. 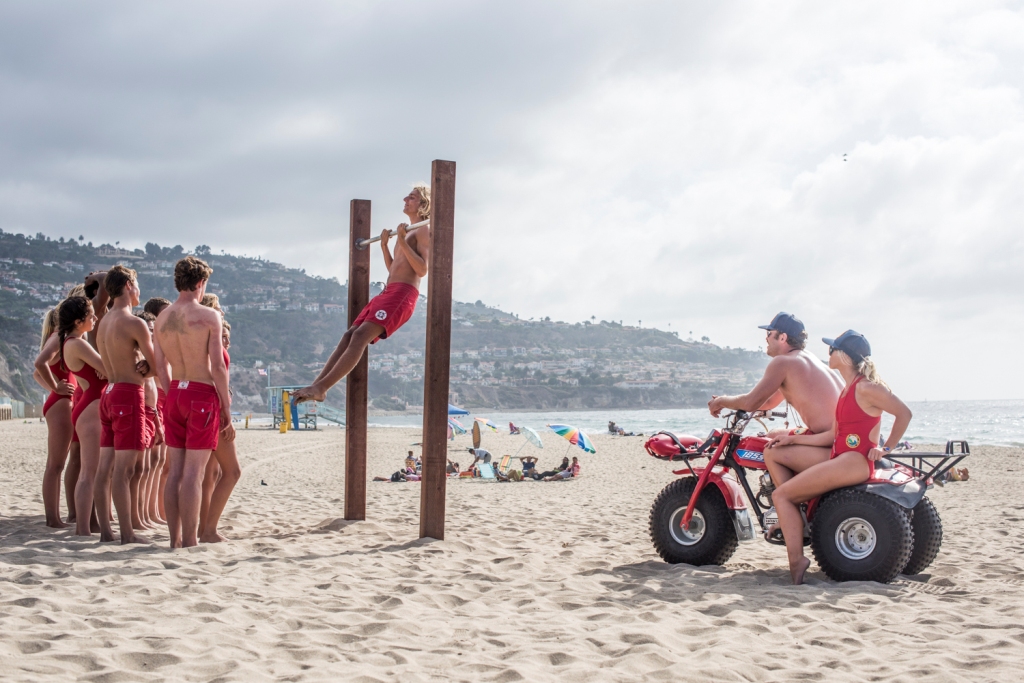 “Bill had a soft spot for Junior Lifeguards because he went through the program as a kid. I told him I was terrified of the ocean. He said he was too, until Junior Lifeguards. And that’s how we cracked it. That was our way in. We merged our childhood anxieties and hung them on Bill’s Junior Lifeguard story.

“Age of Summer” opens with a breaching dolphin and 1986 Hermosa Beach writ large across the screen, followed by a kid wearing bright blue shorts and a collared shirt, bicycling wide-eyed down The Strand, teased by girls on rollerskates.

“Movies are about transformation, from being one thing and becoming another. I loved the transformation the ocean provides,” Kiely said.

At its most basic, Kiely pointed out, parents put their kids in Junior Lifeguards to drown-proof them. But the transformation can be far more far reaching.

“After moving around a lot, my family landed in Ventura. The cold water there separates kids who really want to surf from the kids who don’t,” he said.

After a summer in Junior Lifeguards, Kiely really wanted to surf.

“I’d hang out at the surf shops, where there was a camaraderie and a certain aesthetic, with the beautiful boards, photographs and surf art. I’d go to the library to look at the surf magazines because there wasn’t an internet. My fantasy was to explore the world by surfing.

“You can go to a new city, and not think much of it. But if you see it through the right lens, or have the right guide, you’ll fall in love with it. JG’s was my guide to the ocean.”

The director and writer were confident they had a solid story, whose working title was “Kook,” and a solid film crew. 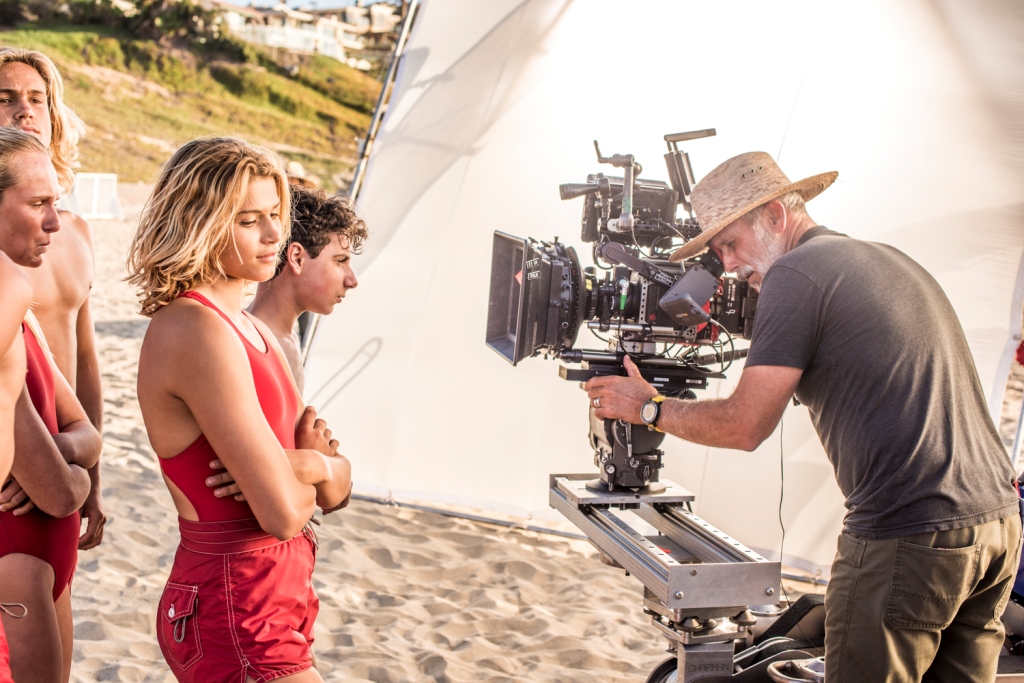 Financing and casting were more elusive.

Kiely prefered an independent production to studio backing, because “I have aversion to violence. I didn’t want to spend three years on a project where the end of the movie is resolved with a gun. I know the reality of guns. A buddy was shot and murdered when I was in college and I don’t want to glorify that.”

Harris’ father-in-law is Kent McKeown, a Hermosa Beach shoring contractor with a basement full of old blueprints. (And also old surfboards, including lifeguard paddleboards requisitioned by the JG instructors in the movie.)

“Bill and I took three rolls of blueprints, flipped them over and wrote an overview of the movie in different colored markers. We spent hours over coffee that turned to beer that turned to coffee. That’s Bill’s collaborative process. He really wants to know the story before starting to type. Then we started the process of writing something between a treatment and a synopsis, and finally a script,” Harris said. 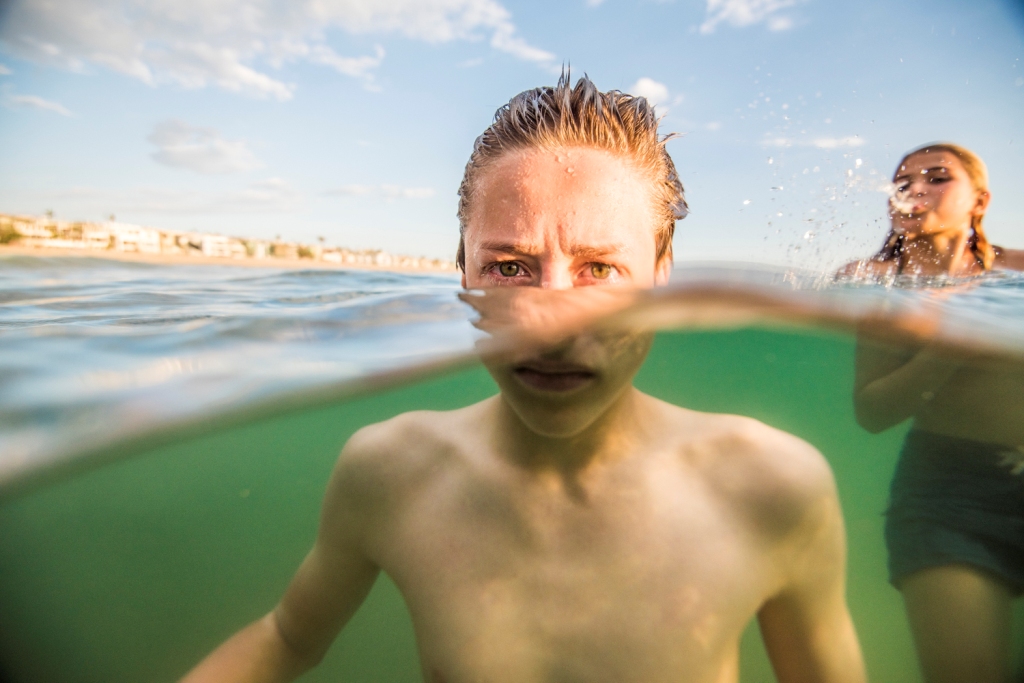 For the role of the new kid in town, they quickly settled on 15-year-old veteran actor Percy Hynes White (“The Gifted,” “Cast No Shadow,” “Between”).

“He self-taped himself with his shirt off. He was all bones, no muscle. That’s how you are when you enter junior guards and he was willing to be that kid. During the 20 days we filmed on the beach, he got a tan and let his hair grow out, transforming from a nervous Nova Scotia kid to a confident beach kid,” Kiely said.

“Percy hadn’t done much skateboarding and was driving everyone nuts trying to perfect his ollie. We were afraid he’d break a leg and we wouldn’t be able to finish the film,” Harris said.

(At the Hermosa Beach premiere, prior to the film screening, White appeared in a brief video to apologize for being unable to attend. The brown hair he has in the film was bleached surfer blond). 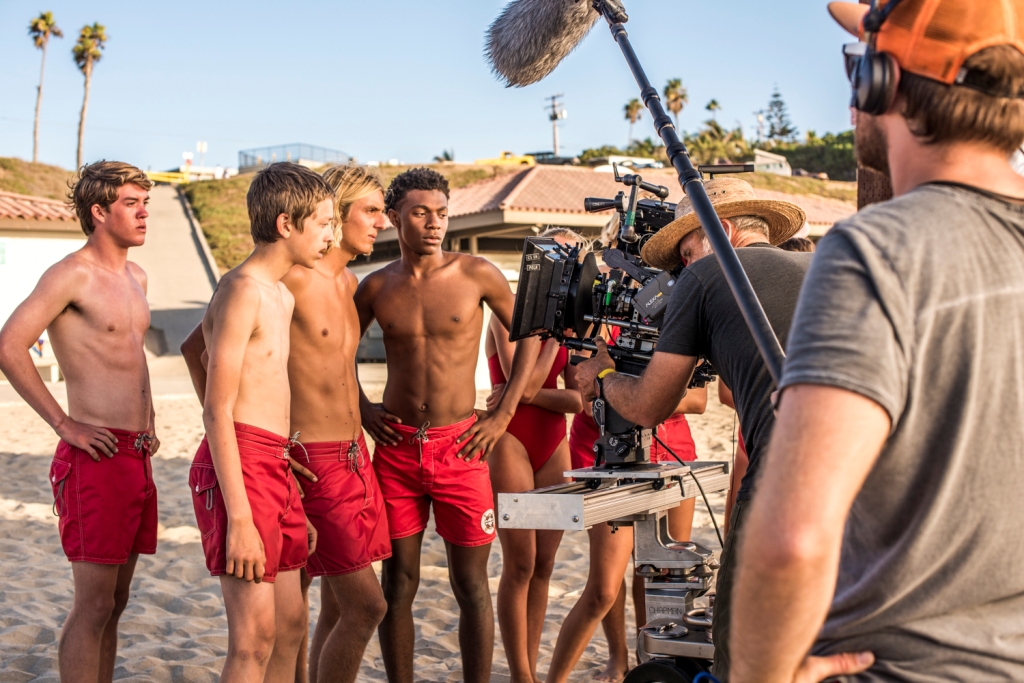 Casting the rest of the film presented a distinct challenge.

“To get the authenticity I wanted, the cast needed to surf and to understand the things I love about surfing. You need a board and boardshorts. The better you get, the less you care about the material trappings.

“We combed social media and put out a national casting call for anyone who could act and surf. After narrowing it down to a few guys we took them to County Line. I figured anyone who surfed would love the opportunity to surf County Line in front of a camera. I paddled out with them, but didn’t talk to them. I just caught as many waves as I could.  They couldn’t surf,” Kiely said. “That’s when we decided, let’s embrace the whole South Bay thing and have fun with this.”

Kiely contacted Dennis Jarvis and Dickie O’Reilly at Spyder Surf, Sonny McCollom at ET and Bob Rich at Becker and asked to hold casting calls in their surf shops.

“I shop in their stores,” he explained.

The surf shops came through with what the national casting call couldn’t. 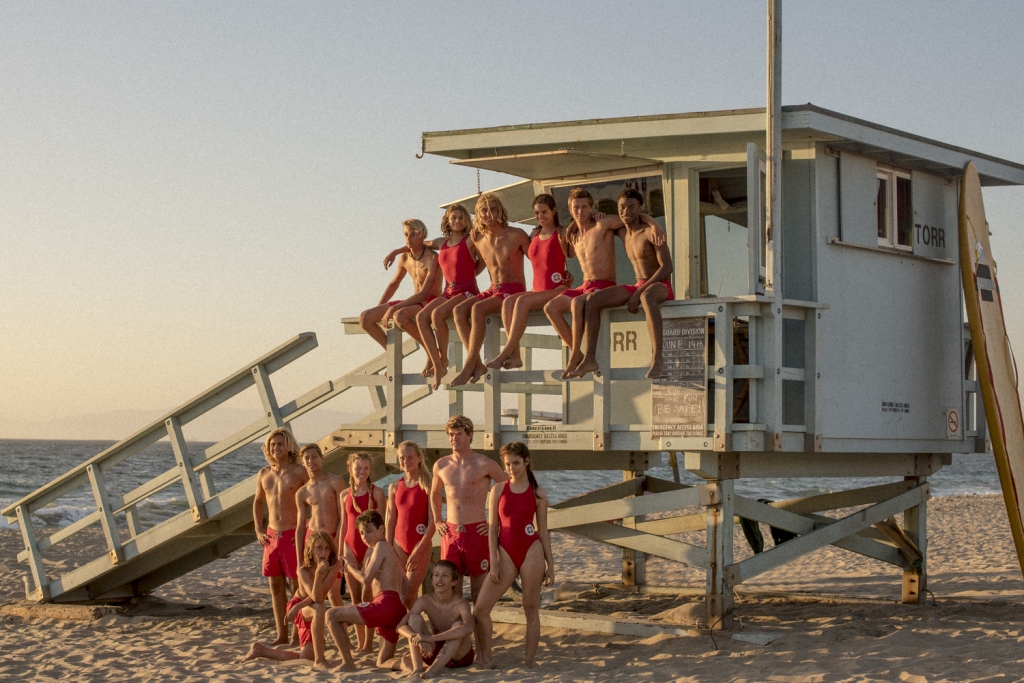 “We got the foundation for the film from the shops,” Kiely said, referring to the dozen hot, young surfers cast as White’s fellow junior guards. Among them were Cody Purcell, Chris Hall, Parker Browning, Hali Honea, Shane and Malia Balzer and Megan Seth.

For the surfing rolls that included dialogue, Kiely cast Hudson Ritchie and Charlotte Sabina. Hudson portrays the alpha male whose circle White is desperate to become a part of. Sabina is the achingly unattainable surfer girl whose mere presence renders White dumbstruck.

“Hudson drips authenticity. To a degree he was cast to play himself,” Kiely said of the long blond haired, homeschooled, Redondo Beach, longboard soul surfer.

That same authenticity convinced Kiely to cast Sabina in the crucial, co-starring role, despite her lack of acting experience.

“We considered an actress from out of town. But when we did some camera tests with Charlotte, there was an energy about her. And her surfing ability played a huge part in our decision. We thought if we got an acting coach for her and Hudson that they’d get the acting skills they needed,” Kiely said. 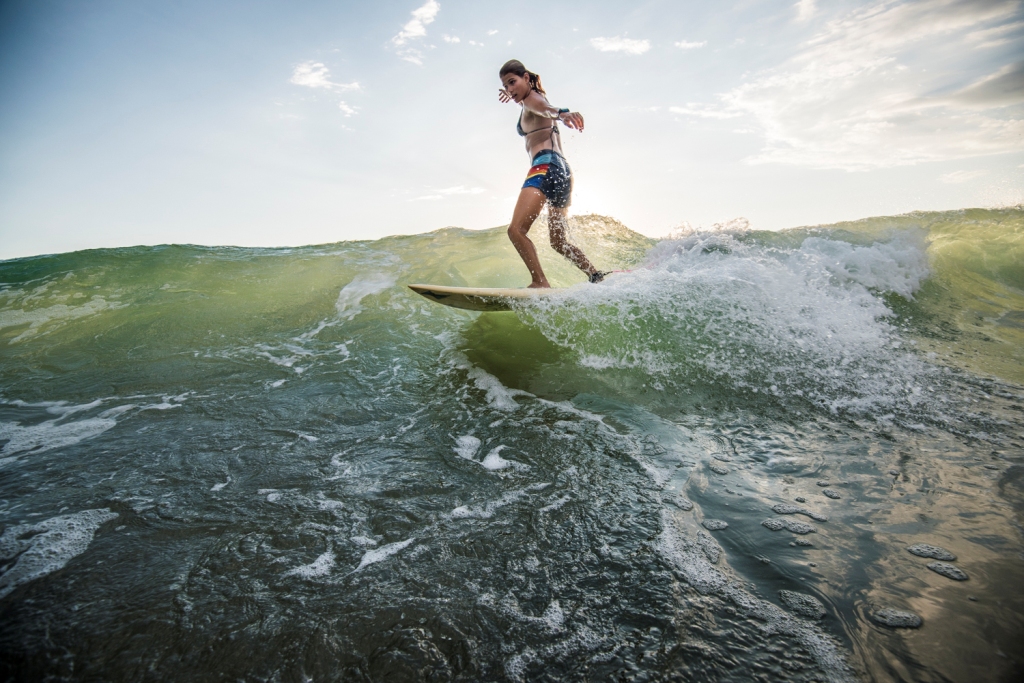 It was essential for the female lead not just to surf, but to surf well, Kiely pointed out, because unlike most other teen athletics, junior guards is coed.

“In other sports, teens get separated by sex. JG’s doesn’t do that. The girls and guys compete together. That’s one of the things I like most about the program,” Kiely said.

“Casting non actors, like Sabina and Ritchie, can get messy” Harris pointed out, “because you have name actors auditioning for the same roles, and there’s Bill with a video he made in his house of an unknown,” Harris said. “But that’s what makes indie films exciting. The actors and the non-actors learn from each other. They come off as more intimate than when everyone is super slick. Bill liked Hudson and Sabina because they were comfortable in their own skin and not like characters you’ve seen a hundred times.”

Kiely attributed much of the authenticity he aimed for to the chemistry between the non-surfing actors and the non-actor surfers.

“Natural friendships formed. Hudson knew it was his responsibility to be sure Percy was safe in the water, which gave Percy confidence and Percy knew he was responsible for helping Hudson and Sabina to feel confident in their acting. We talked to them about it.” Kiely said. 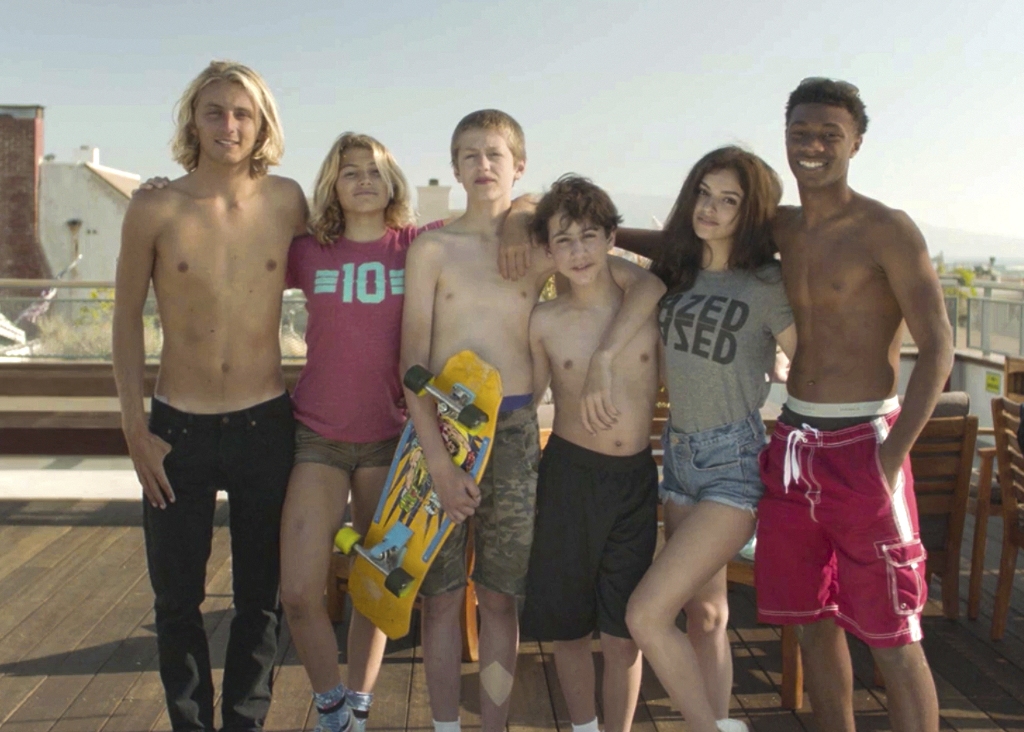 “The film is about gaining confidence, making friends with the people you want to make friends with and breaking away from friends who go in different directions,” he added.

A central subplot is the dissolution of White’s friendship with his best friend, who prefers playing with Legos to the physical challenge of junior guards.

“The friendship fails. But the friends don’t fail. They just go different directions. Fifteen years down the road I expect they’ll re-meet and become friends again. That’s what’s so great about living here. You can do what you want. The film’s a love letter to Hermosa from Bill and me,” Harris said.

It’s also a love letter to the ocean.

“I’m afraid of the ocean becoming a cesspool. This is my way of showing how beautiful it is and what a joy it is to be in. My hope is the film will be a bridge to the ocean for people who don’t live here,” Kiely said. B