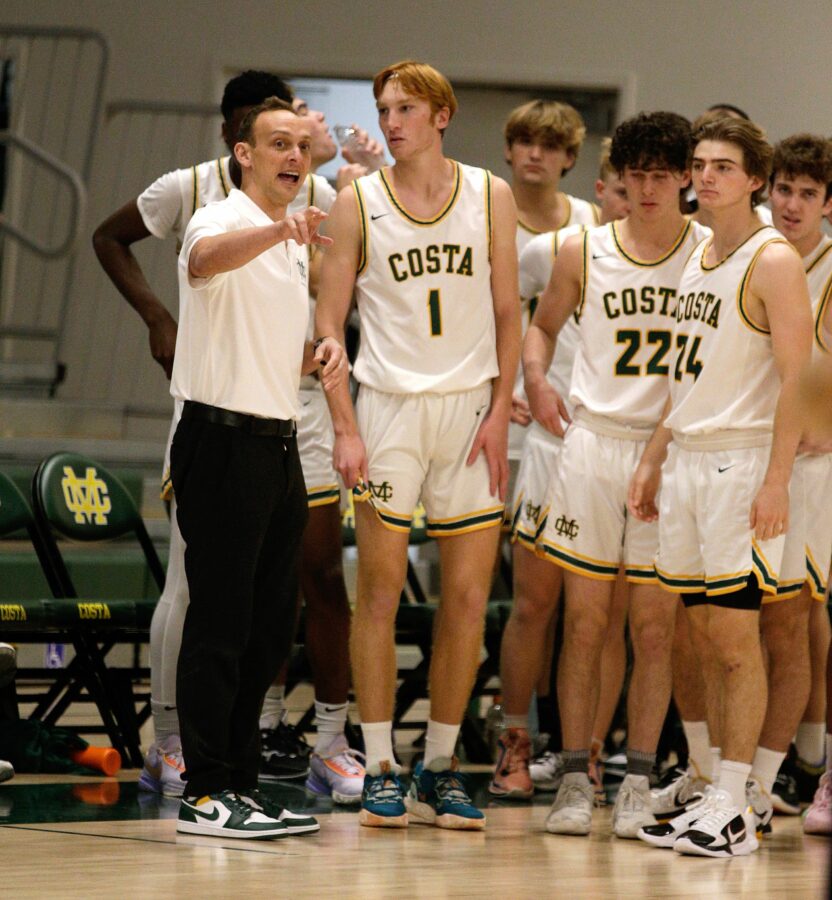 It was bound to happen sooner or later. Wednesday night just happened to be the perfect time for the Mira Costa boys basketball team to pitch a fourth quarter shutout.

Five years into the Coach Neal Perlmutter era, the style of play he favors is clear: his teams are patient on offense and suffocating on defense.

If you don’t play all-in, tenacious D you won’t play at all. Indeed, you won’t even make the team.

The result: a lot of close, low scoring games – mostly victories for the Mustangs.

The tenacious style he demands reached a new high point on Thanksgiving Eve when his team held high-scoring Loyola scoreless in the fourth quarter to nail down a 57-46 victory that kept the Mustangs undefeated in the young season at 5-0.

But with his defense-first coaching approach it was bound to happen sooner or later.

Perlmutter made his rep locally by turning around a West program from a doormat to a CIF-winning powerhouse in just three years.

After that near-miracle, he was hired to revive a dispirited Mira Costa program that had fallen on hard times while its archrival Redondo won eight straight Bay League titles. Nobody expected he would duplicate the quick turnaround he pulled off at West, so naturally he shocked everyone by coaching the Mustangs to a Bay League title in only his second season.

Since then, he has set out to build a self-sustaining pipeline that keeps talented Manhattan Beach kids at home instead of playing for schools like Bishop Montgomery or Loyola, as they have done all too often in the past.

That’s why he took such pride in Wednesday night’s sweep of Loyola – the Junior Varsity and Varsity teams both beat Loyola, just as they did last year.

But this year the varsity had a major struggle on its hands before pitching a shutout in the fourth quarter to nail down the victory.

After Costa had clawed its way to a 29-27 halftime lead, Loyola pulled ahead 42-37 mid-way through the third quarter, silencing a festive holiday home crowd in Fisher Athletic Complex. 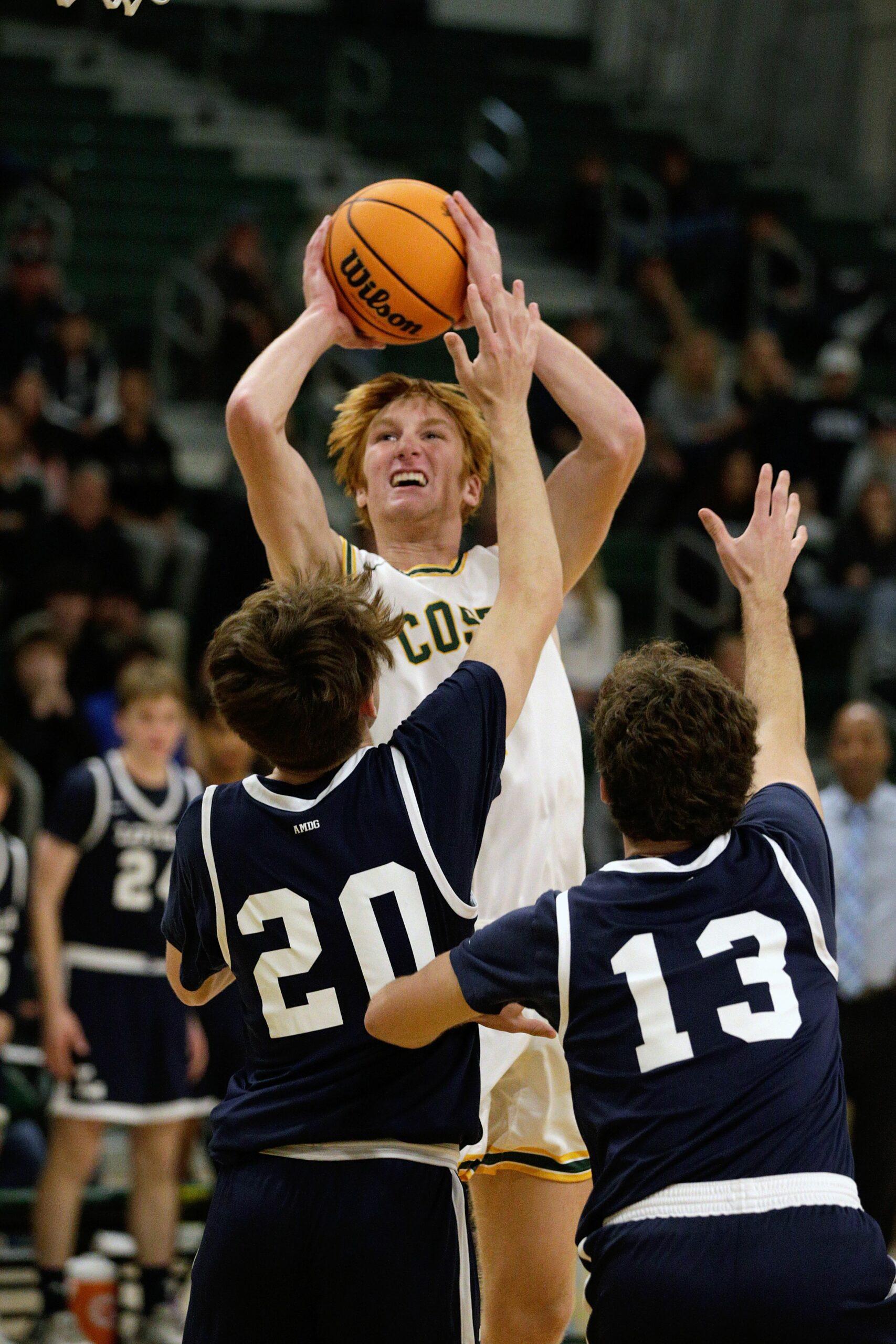 The 6-foot-7 Trey Pearce was the 6th man last year and a breakout star this year.

Householter nailed a three-pointer, Black calmly swished two foul shots and suddenly it was tied at 42-42. Loyola had a last gasp of offense to go up 46-42, but when Householter hit another three to pull the Mustangs to within 46-45, Loyola called timeout to regroup.

The third quarter ended on a dramatic note when Lundy, who led the team in three-point percentage last season, missed a corner three but bulled his way to the basket, grabbed his own rebound and stuck it back in to beat the buzzer and give the Mustangs a 47-46 lead and a tiny bit of breathing room after being five points down just a few minutes earlier.

Both teams tried to recover from the fast and furious action during the break – Householter had been slammed to the floor and stayed down for a few minutes before limping to the sideline – and started the fourth quarter ready to rumble for local bragging rights.

But only Costa was ready to meet the challenge.

“We finally got back to our defensive principles,” Perlmutter said. “And we have a rigorous training program to make sure our kids are in great shape, which wears down the other team by the fourth quarter.”

Householter’s backup, slick sophomore point guard Christian Kranz, started the fourth quarter by driving hard to the hoop for a nifty layup. On the other end, Costa was playing ferocious defense and forcing bad shot after bad shot mixed in with several ugly turnovers. 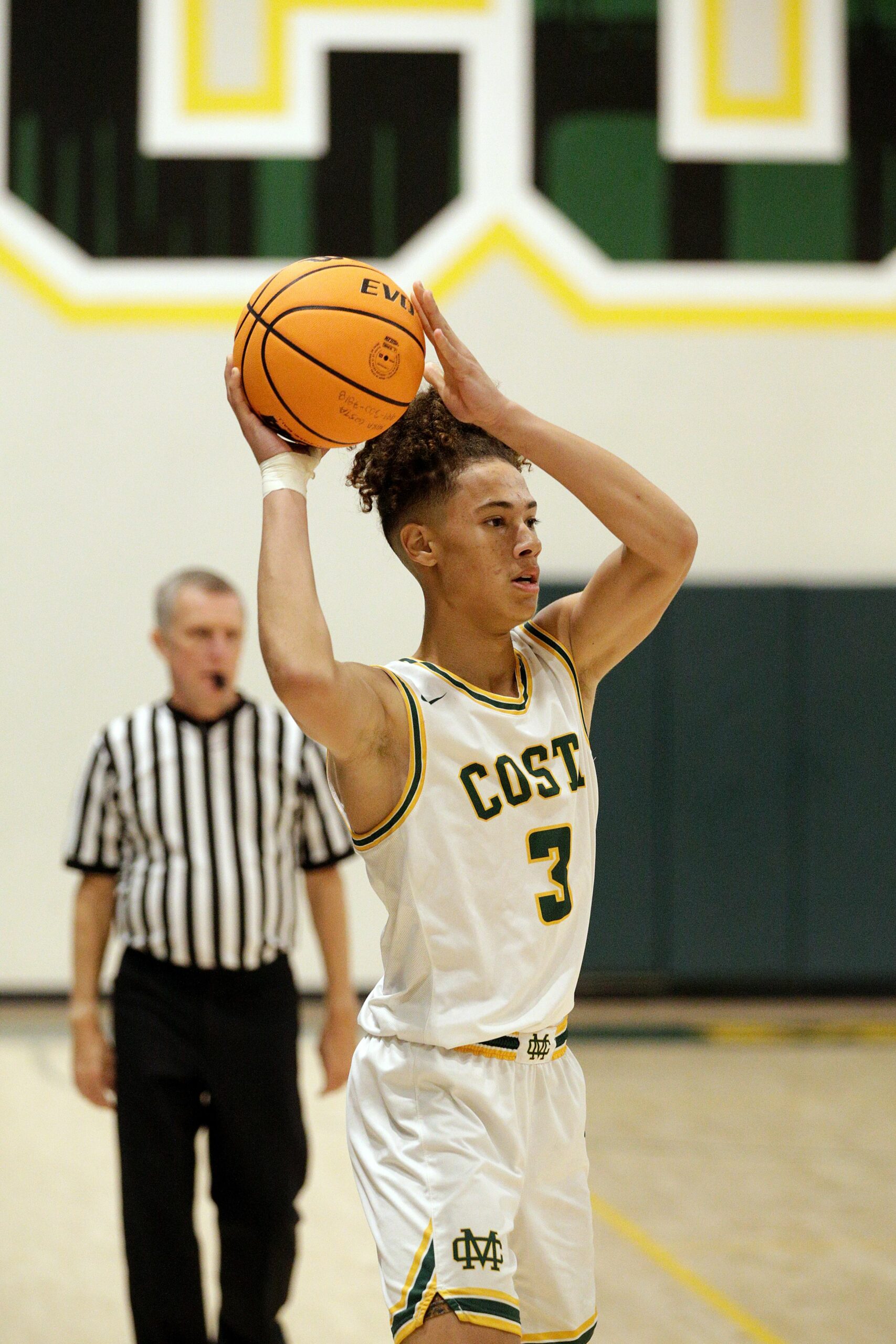 A minute later junior forward James Reach unleashed a power drive to the hoop to pump the Mustang lead up to 51-46. With Loyola coughing up the ball on its next possession Pearce added another yet another inside bucket to get it to 53-46.

Householter finished off the reeling Loyola team with a get-out-of-my-way layup for a nine-point lead, by far the Mustangs biggest lead of the game. One more Loyola turnover, followed by a Householter 15-foot elbow jumper, and what had once been a back-and-forth game had suddenly turned into a 57-46 blowout as the final buzzer sounded.

Householter finished with 16 points and his usual assortment of floor burns, Lundy used his inside-outside game to finish with 12 points, and Black and Pearce each chipped in 11 points to make it a balanced scoring attack.

But it was the defense that won this game. Even Perlmutter, who demands in-your-grille defense, had to admit he was impressed by his player’s defensive effort.

“Never seen that happen before,” he said moments after the game. “We shut them out the entire fourth quarter. Our kids played really hard and made it happen.” 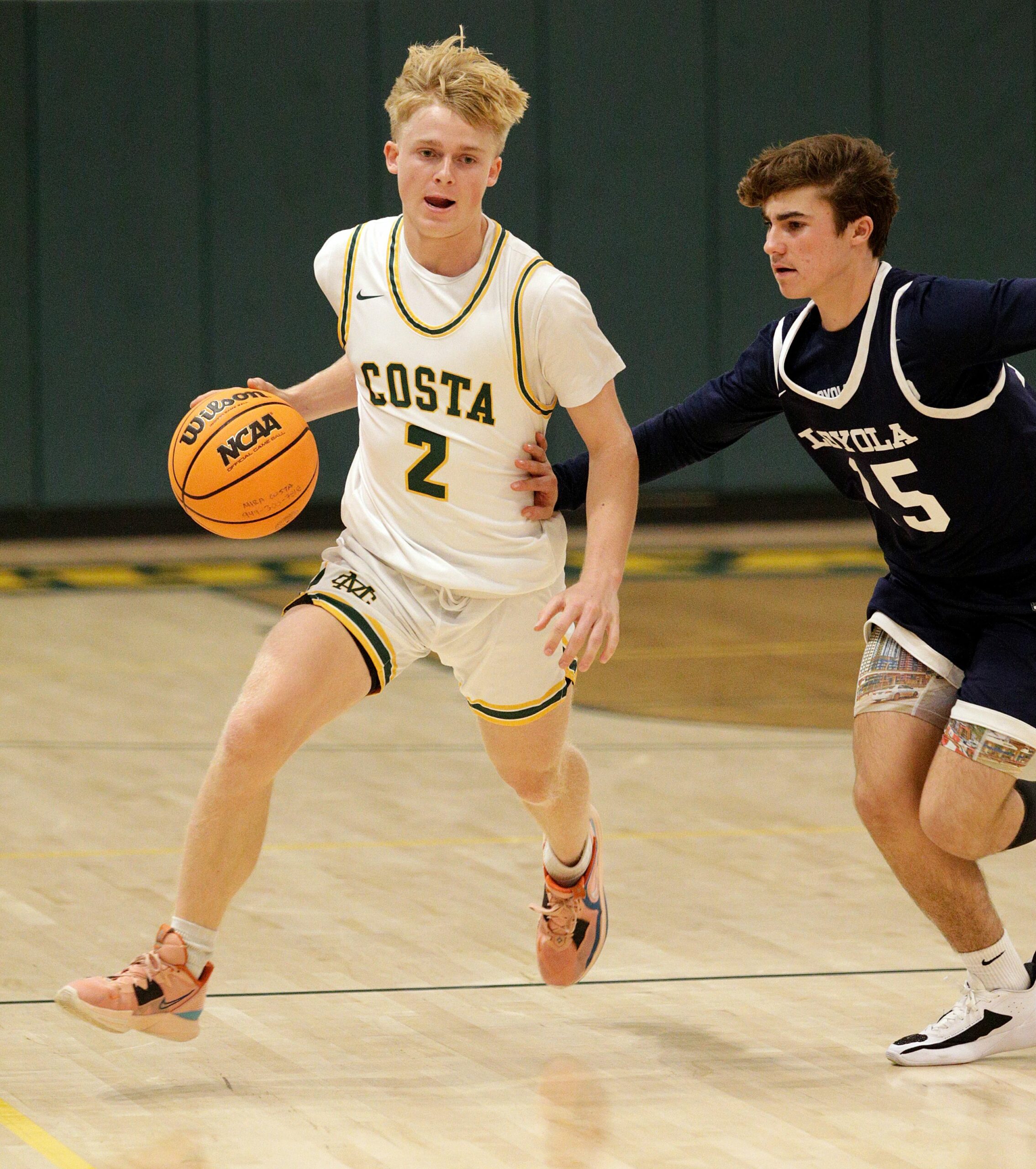 The Mustangs came into the game fresh off a victory in the Ocean View Jim Harris tournament in Huntington Beach that ended with a typical two-point win in the final, 43-41 over Tesoro.

Pearce, a 6-foot-7 redhead with a 3-level game, had been the first man off the bench last season. This year he was the breakout star of their victory in the Jim Harris Tournament. He was named Tournament MVP.

But this year’s edition of the Mustangs goes much deeper than the four seniors who figure to get the lion’s share of the attention from opposing defenses and from the local media.

It begins with the fifth starter, a 6-foot-7 sophomore named Preston Ezewiro with springs in his legs and no fear in his heart. When he wasn’t blocking shots and ripping down rebounds against Loyola, he was hitting three-pointers and taking the rock to the rack strong.

“We think he’s a future star for us,” Perlmutter said. “He’s got all the tools. He just has to keep working hard.”

The roster also has two other sophomores who will be part of the regular rotation this year: 6-foot-2 point guard Christian Kranz and 6-foot-4 forward Jacob De Armas, a fierce defender and rebounder.

The Mustangs goal is the same as it is every year: win the Bay League and win CIF.

Last year Householter was named the most outstanding player in the Bay League, and Lundy made first team all-league while Black was named to the second team.

All that talent and experience, backed up by the talented junior Reach and the three sensational sophomores who led the JV to an undefeated season last year, make Costa the preseason favorite to win the Bay League. But league play doesn’t start till January, when the picture will become clearer.

“It’s a long season and a lot can happen,” Perlmutter said. “But we’re off to a good start.” 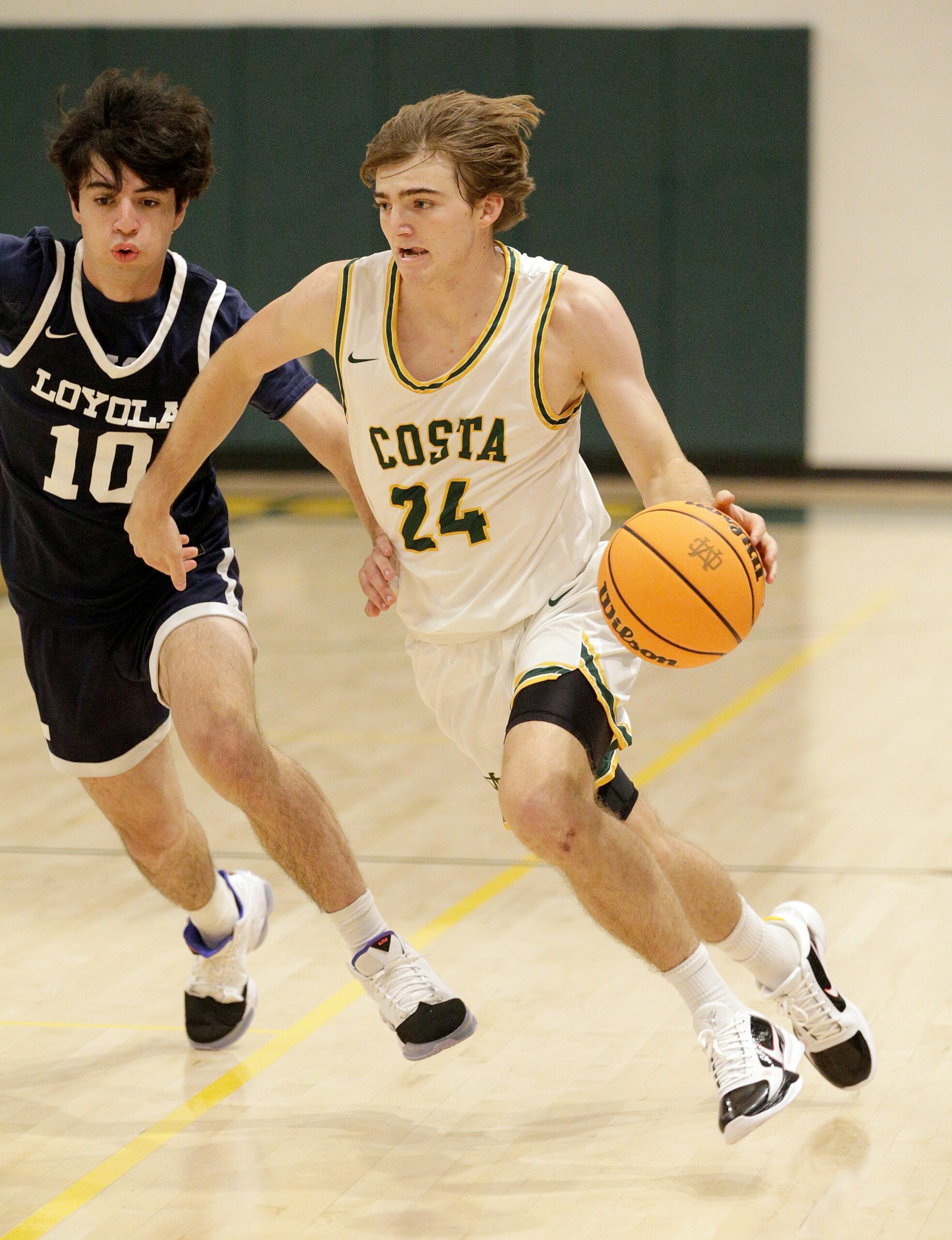 Mustang point guard Will Householter is one of four starting seniors.

“John was a salt-of-the-earth kind of guy,” Perlmutter said. “He worked so hard and took his team to back-to-back CIF finals. On top of that he was one of the nicest people you’ll ever meet.”

Lapham had been dealing with leukemia for a while. Then last spring, the avid bike rider had a bike accident that broke his spine. The meds he had to take made his bones brittle, exacerbating the leukemia.

“He was so tough, a real fighter,” Perlmutter said. “He spent six months trying to recover at a clinic in Denver but eventually his body just gave in to the cancer. He will be terribly missed.”

On a personal note, All Ball would like to say that Lapham was the most thoughtful, polite and positive coach we have ever had the privilege to cover. He was a true gentleman in every sense of the word, and his girls were lucky to have him as a coach. Nothing made him happier than talking about the improvement in his players.

Better jump on the Trojan Train before it’s too late and all the seats are gone.

At the same time the local media – including All Ball – are campaigning to make Trojan quarterback Caleb Williams the first USC Heisman Trophy winner since Manhattan Beach resident Matt Leinert back in 2004.

Riding the momentum from its epic 48-45 win over UCLA just a week earlier, USC destroyed fifteenth ranked Notre Dame Saturday night by a not-as-close-as-it-sounds score of 38-27.

Right now the Rams suck, the Lakers are an embarrassment to the memory of Dr. Jerry Buss and the Dodgers choked their way out in the first round of the playoffs after a franchise record 111 regular season wins.

So in a town starved for champions, and someone to root for, the Trojans look ready-made for a college version of what the Rams pulled off last year: winning the big game in SoFi Stadium.

Before being selected for the college football playoffs, however, USC must avenge its only loss to Utah in the Pac-12 championship game Friday night. If they do that – and All Ball predicts they will by a score of 30-24 — then they will be a lock to be one of the four teams selected for the College Football Playoffs.

Next stop for the Trojan Train: SoFi Stadium in January.