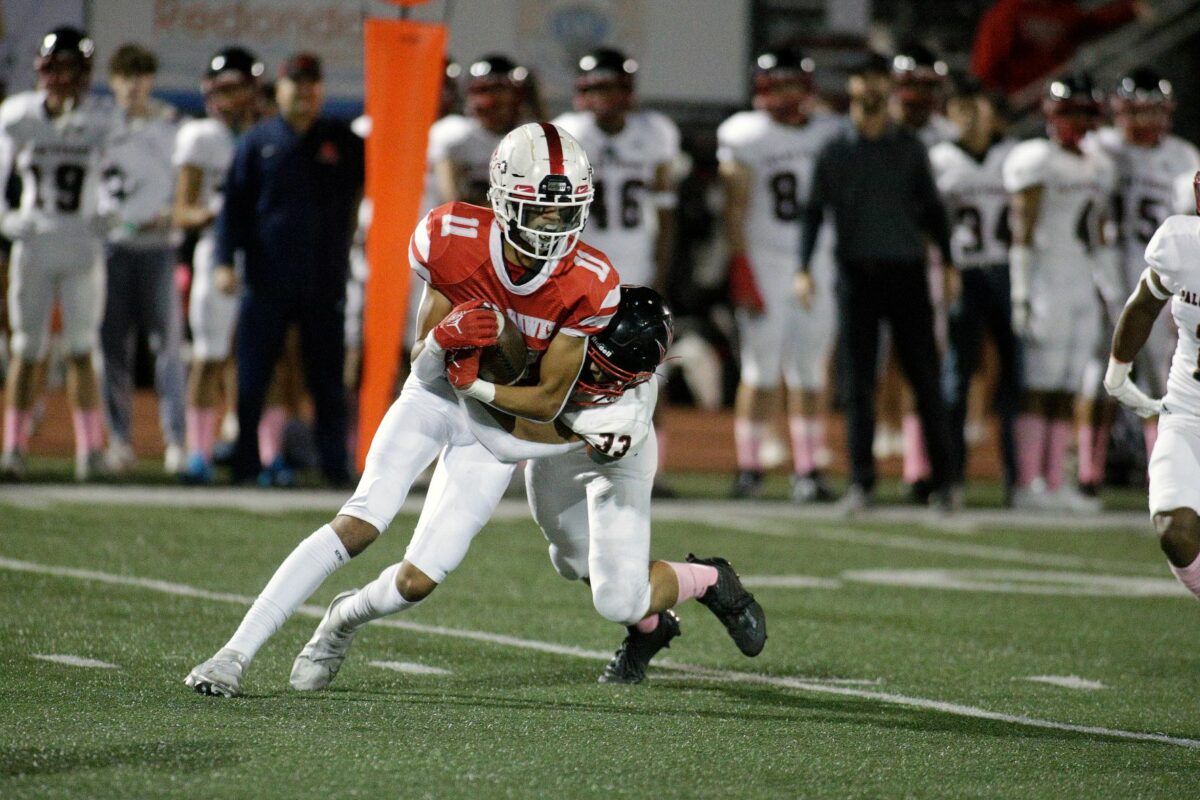 Wait till next year.

That’s always been the Dodgers theme song. Why should this year be any different?

As a true-blue Dodgers fan, I’m not just sad that they lost to the San Diego Padres 5-3 Saturday night to complete a 3-1 collapse, after being up 1-0 in the best-of-five League Divisional Series.

And I’m not only depressed that yet again they were great in the regular season – 111 wins, the fourth most in Major League Baseball history — and yet once again they choked it all away in the postseason.

Nor am I only despairing that this maddening cycle keeps happening over, and over again, and indeed, will probably happen again next year, just like it did last year and so many other years over the last decade.

No, I’m beyond sadness and depression and despair. Those emotions are so 2021, when the Dodgers fell to the Braves in the postseason playoffs despite having a much better regular season record than Atlanta.

This time I’m angry that we had to watch this horror film one more time.

I’m angry that the Dodgers wasted $102 million on Trevor Bauer, a pitcher who they knew was a knucklehead who was sure to cause more trouble off the field than he was worth on the field. He’s one of the few Dodgers who actually exceeded expectations: by abusing women in a horrific way he got himself thrown out of baseball and reviled by his teammates.

I’m angry that the Dodgers didn’t have that $102 million to spend on a front-line starter this season when their ace, Walker Buehler, was declared out for the season – and probably all of next season too – with an arm injury.

I’m angry that they keep re-signing guys like Justin Turner and Cody Bellinger who once were productive players – Bellinger was actually the 2019 National League MVP — but are now weak links in a lineup with too many automatic outs.

And I’m really mad that they low-balled ace relief pitcher Kenley Jansen to the point that he finally said the hell with it after 12 seasons with the Dodgers and took a $16 million, one-year offer from the Braves, reluctantly leaving his beautiful family and his beautiful house up on the Peninsula to spend his summers throwing fastballs in hot, muggy Atlanta.

Think the Dodgers could have used Jansen in these last four games with the Padres, where their bullpen fell apart time after time and gave up timely hit after timely hit to the Padres?

Think Jansen could have struck out a couple of those cocky Padres like Manny Machado or Juan Soto, who smirked for the TV cameras every time they got a hit or scored a run?

Think Jansen could have countered the late-inning dominance of Padres closer Josh Hader, who looked like he knew he was going to strike everyone out even before he got to the pitcher’s mound?

I’m pissed off that former Dodgers third baseman Manny Machado sent out a warning of what was to come in the first inning of game two when he homered off Clayton Kershaw in what has become a predictable pattern: Kershaw pitches great in the regular season, then falls apart at the worst possible time in the playoffs. Just like his team does.

And what was the reason the Dodgers gave for not even trying to sign the uber-talented Machado to a long-term deal after his one season in Dodger blue? Some nonsense about him not hustling enough, not appearing to care enough to merit a long-term space in the hollowed Dodgers locker room.

They would have been much better off using that kind of too-proud logic before signing Bauer.

And I’m really upset that the Dodgers didn’t ante up the four, five or even six top prospects it would have taken when the Washington Nationals put Juan Soto up for auction. Word on the street was that Soto wanted to come to LA, but when the Padres bid included the kind of prospects that the Dodgers refused to put on the table, Soto was dealt to San Diego.

That gave the Padres two of the three best young players in all of major league baseball, as he joined Fernando Tatis Jr. on the Padres. Naturally, Soto got the key hit in the game 4 clincher Saturday night.

And just so there’s no mis-understanding, the guy I’m most angry at is President of Baseball Operations Andrew Friedman. While he takes input from Roberts, Friedman makes the final decisions.

But I’m also pissed that Roberts made a serious error in judgment with his choice of relief pitchers Saturday night when the Dodgers 3-0 lead early in the game was evaporating in the seventh inning. Evan Phillips is the best reliever on the team right now, but instead Roberts chose to go with a couple of other guys first. By the time Phillips came in, the lead was gone.

But most of all I’m angry because Roberts promised we would win the World Series this year. In fact, he guaranteed it.

Where I come from, a guarantee is a promise that something will happen the way the guarantor says it will.

Roberts is normally a level-headed straight shooter, always the adult in the room. So eventually Dodgers fans will forgive him for his overly optimistic prediction.

Translation: Wait till next year. 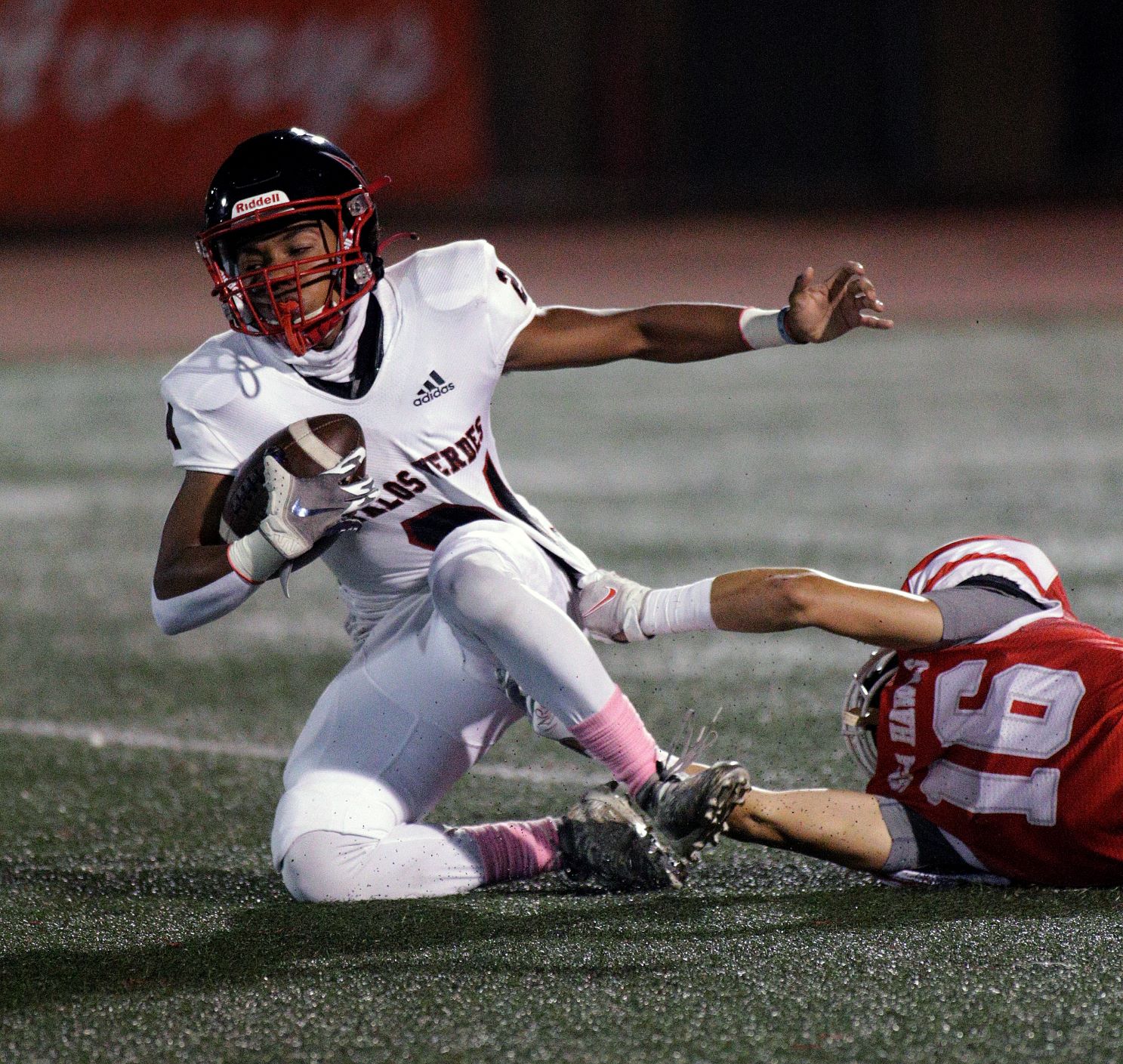 Sea Hawk Sirhondes Williams gets just enough jersey to bring down a Sea King runner Friday night. But it wasn’t enough to stop the Sea Kings from running up a 35-0 victory. Photo by Ray Vidal

Mira Costa Football Up, Redondo Down

The Mira Costa football team is moving in the right direction again as the annual season finale showdown with archrival Redondo looms on the horizon just a week away.

They’re moving in the wrong direction.

The win pushed the Mustangs’ record to 6-2 on the season and 2-1 in the Bay League, good for second place behind Palos Verdes.

But Redondo, which had been the surprise team of the first half of the season with a 6-0 record, has hit a huge speed bump in the road back to glory with two consecutive shutouts by Bay League opponents.

First came a 28-0 drubbing at the hands of Culver City last week, a totally unexpected result, which was mainly attributed to the absence of star quarterback Christian Hunt, who missed the game due to illness.

Hunt, however, made his return this week as the Sea Hawks were smoked 35-0 by PV. The loss dropped Redondo to a 6-2 record and 1-2 in the Bay League.

Mira Costa’s offense, so lethal all season – even in a season opening 52-48 loss to St. Francis – came back to life with a vengeance against Santa Monica. Its primary weapons – sophomore quarterback Nico De La Cruz, junior wide receiver Reese Leonard and senior running back Matthew Kraskouskas – all returned to form as the Mustangs rolled right over the Vikings.

De La Cruz threw three touchdowns for the Mustangs while Leonard and Kraskouskas chipped in with two scores each.

The game was decided quickly as the Mustangs took advantage of some early Vikings’ mistakes to jump out to a 21-0 lead.

Santa Monica got on the board in the second quarter when Griffin Seals caught a touchdown pass from Alessandro Nelson, but the extra point was blocked, leaving the score 21-6.

The Mustangs dominated the remainder of the game and stretched their lead to 42-6 with three unanswered, second-half touchdowns.

Just a couple of miles away at Redondo, the Sea Hawks struggled to accomplish anything positive as a surging PV team dominated from the opening kickoff to the final play.

Even with star quarterback Hunt back calling the signals and throwing the passes, Redondo was unable to put a single point on the board.

Meanwhile, Palos Verdes burned Hunt with three interceptions and running back Jason Roah scored a pair of rushing touchdowns to keep PV in first place in the Bay League with a 3-0 record and 5-3 overall.

Showing just how strong their defense has become over the last month, the Sea Kings have allowed just 10 points, with three shutouts, during their four-game winning streak.

“It’s coming together,” Palos Verdes coach Guy Gardner said. “They’re getting more comfortable with what we do. … It was fun watching the guys get after it.”

Beresford returned his interception 37 yards for a touchdown, his second pick-six in as many weeks.

Beresford’s play was part of a key stretch in which Redondo was outscored 20-0 over the final 2:33 of the first half.

“It snowballed on us,” Sea Hawks coach Keith Ellison said.

With a 28-0 halftime lead, Roah capped his performance on a 1-yard touchdown early in the fourth quarter for the lone score of the second half.

The Sea Hawks’ offense didn’t make it into the red zone until the opening drive of the third quarter.

However, the drive stalled on the Palos Verdes 14-yard line after failing to convert on fourth-and-11.

Redondo has now been shut out in back-to-back weeks.

“Their team is disciplined, they’re tough, and they know what they’re supposed to do,” Ellison said of the Sea Kings’ defense. “Hats off to them. They played a really good game tonight. It was difficult to move the ball. We turned it over four times tonight, which you can’t do if you want to beat a good team.”

After both offenses opened the game with three-and-outs, Palos Verdes struck first on Beuerlein’s 10-yard connection with Gayton. Earlier in the drive, a roughing-the-passer penalty following a completion put the Sea Kings on the Redondo 14.

Two more penalties after the touchdown allowed Palos Verdes running back Eric Mulkey to punch in the two-point conversion for an 8-0 lead late in the first quarter.

Then came the decisive stretch.

After Beuerlein found Alexander for an 18-yard score, the Sea Hawks immediately turned the ball over as Beresford stepped in front of Hunt’s next pass.

Redondo turned the ball over again to open the next drive, as the Sea Kings recovered a bad snap on the Sea Hawks’ 10. Three plays later, Roah ran in for a 3-yard touchdown.

Despite suffering consecutive shutouts, the Sea Hawks know all will be forgiven if they can win the annual backyard brawl with Costa on Friday, October 28. The game will be played at Redondo, so that should give them extra motivation to get back to that elite level of play that they opened the season with during their first six games.